What are the most original and famous country festivals in Italy? Follow us in this journey throughout food and wine, folk culture and events.

A Sagra is a famous festival linked to a village, a town or even an entire Italian territory: it originates from religious traditions, usually the celebration of a patron saint or the promotion of important food and wine product. The sagra is a typically Italian event that brings many people to the square.

First of all, for the inhabitants of the town, it becomes a big party in which everyone participates; moreover, the 'sagra' is a reason to attract many Italian and foreign tourists.

Visit Italy has chosen 10 famous festivals in Italy, the first selection for all the fans of authentic Italian events. 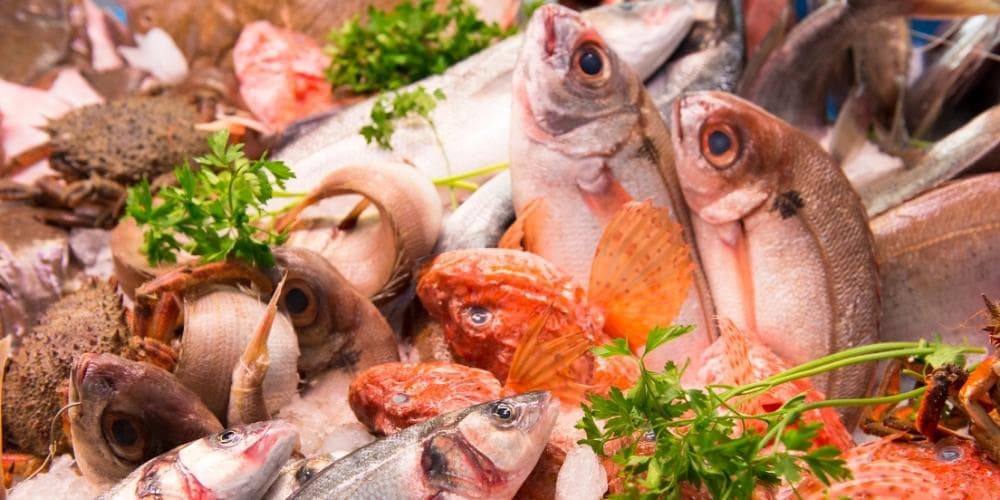 On 9, 10 and 11 September, the 2022 edition of the BrodettoFest will take place in the Marche region. The unmissable Fano's festival celebrates its flagship dish: fish soup, the famous Fano's "Brodetto".

Besides tasting this typical dish at the festival, some restaurants in Fano propose in their menu the Brodetto for a special price, only for these days. 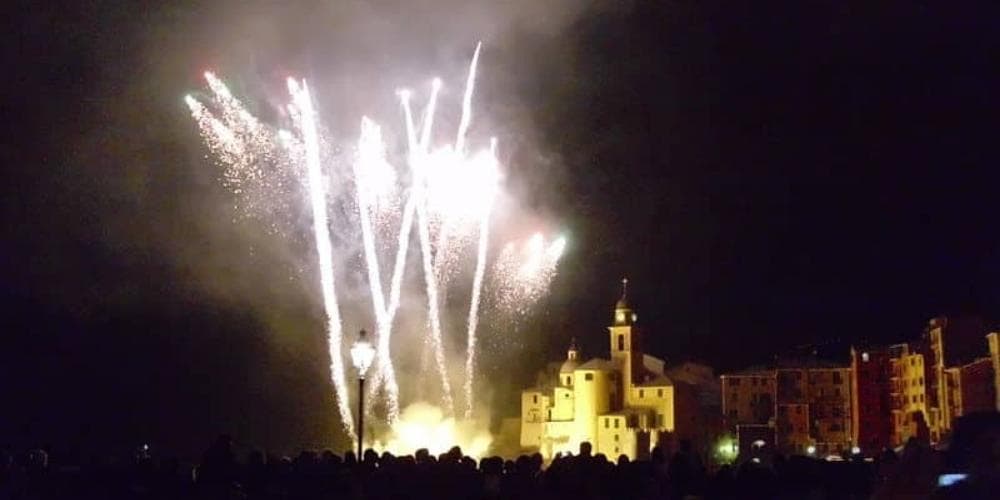 In Camogli, one of the most beautiful villages in Liguria, not far from Cinque Terre, celebrates the Fish Festival. A record-record-breaking fried fish pan is the main attraction of the event dedicated to St Fortunato - the patron saint of fishermen - usually celebrated on the second Sunday in May.

Besides irresistible cargos of fried fish, you can taste the delicious focaccia with cheese too. 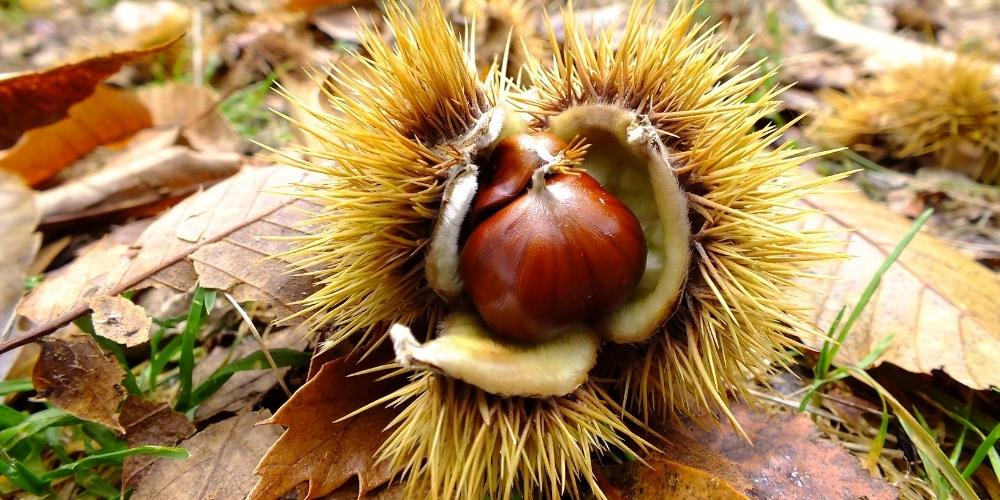 After two years of stopping due to the pandemic, the Sagra della Castagna di Montella IGP will finally return in 2022: the 38th edition will take place from 28 October to 6 November.

Montella's chestnut PGI Festival is one of the most famous wine and food events in Irpinia. Usually, it takes place during the first weekend of November. With this festival, they want to celebrate the chestnut, delicious fruit of the area.

In 1987, their chestnut received the Denomination of Protect Origin (DOC), and it was the only case of fruit and vegetable product in Italy to be part. Then in 1992, the UE Commission gave Montella's Chestnut the recognition of Indicazione Geografica Protetta (IGP) - Protect Geographic Indication (PGI).

Since 1977, they organise this festival to promote Montella's Chestnut, an autumn fruit with excellent nutritional properties. 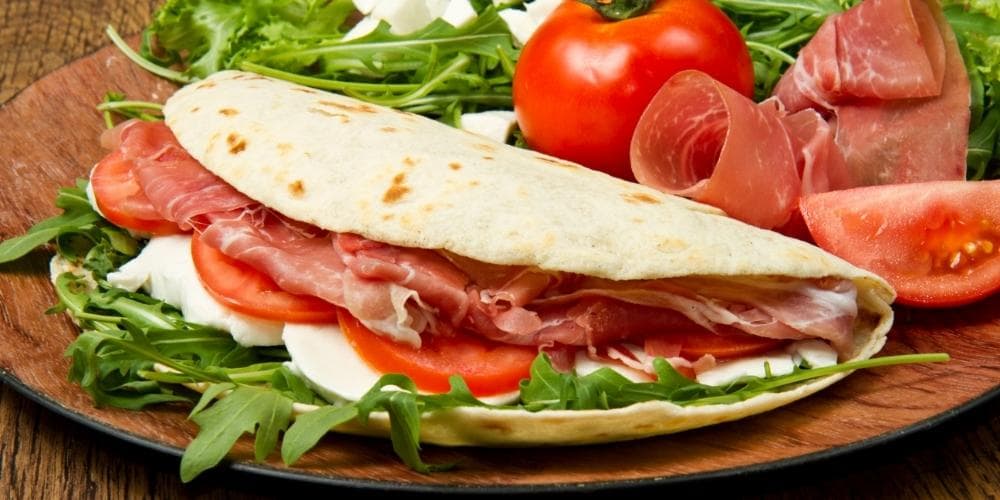 Piadina Romagnola is the typical flatbread of Emilia-Romagna. This year, the festival is from the 9th to the 11th of September in Bellaria Igea-Marina, close to Rimini.

You will find sweet and salad Piadinas, made with traditional or new recipes, filled in more than forty ways. There will be the assignation of the cup for the tastiest Piada.

6. Festival of the Pallet with the Mushrooms in Uliveto Terme (Tuscany) In Uliveto Terme (area of Vicopisano near Pisa), there is the Festival of the Pallet with the Mushrooms. The 2022 edition will be held on 8-9-10 July and 15-16-17 July and will take place in the village stadium. Food stands will open from 19:00, and there will be dancing with a live orchestra.

The Pallets are very known in Tuscany, but not really outside the region.

The pallet's recipe consists of a soft corn polenta of a consistency similar to semolina pudding. It is served on a soup plate with a tasty mushroom or meat sauce, otherwise with delicious cheese fondue or vegetable sauce.

During the festival, it is possible to taste this dish in different combinations.

With the 2021 and 2022 editions cancelled due to the pandemic, the festival will return in 2023. We are in the province of Rieti. On the first Sunday of Lent, Castel di Tora on Lake Turano hosts the Polentone Festival, an event celebrating the town's most representative dish.

The castle's location is in a dominant position. It is one of the most beautiful villages in Lazio. The festival takes root in the far 1920. Here, they dress polenta with herring, tuna, salt cod and anchovy, which enrich the Sugo Magro, prepared by the village's women.

This local food tradition is so old and rooted that Castel di Tora has become an official Italian Polentari's Cultural Association member. 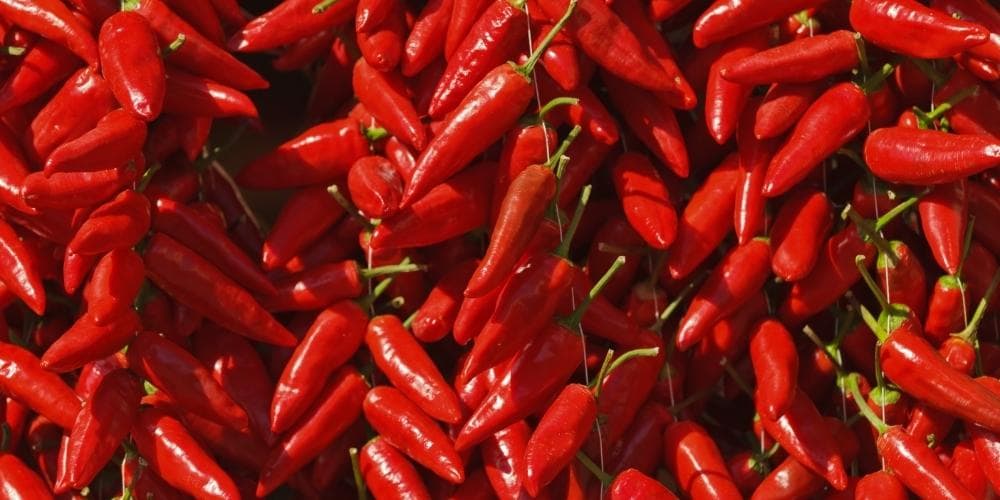 From 7 to 11 September 2022, the Peperoncino Festival is an event not to be missed in Calabria.

In the chilli pepper capital of the world, Diamante, five days of gastronomy, conferences, exhibitions, shows and cinema and the historic challenge between chilli pepper eaters. 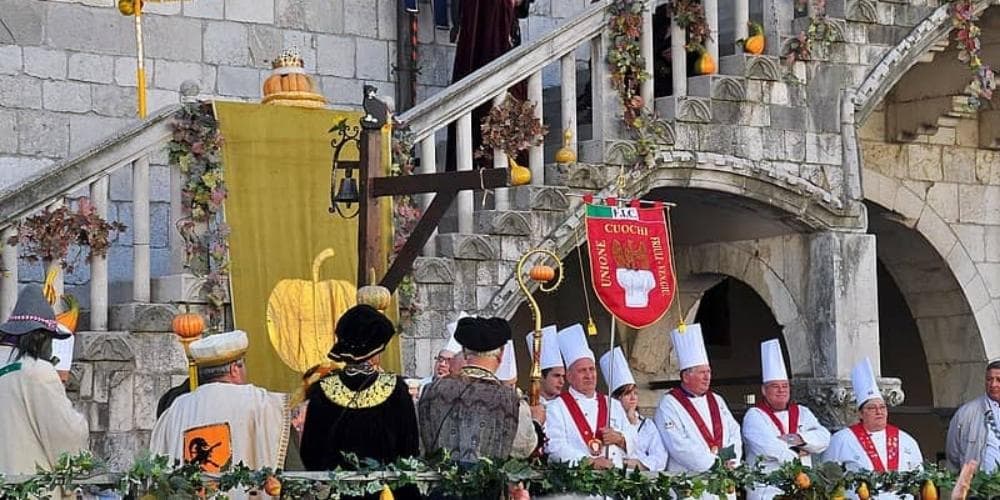 The Venzone festival is one of Italy's most important pumpkin festivals, and the 2022 edition will take place on 22 and 23 October.

This link between Venzone and the pumpkin took origin from a curious story when the city decided to build the church's bell tower. They called a master from Udine. He covered it with brass and put on a wonderful golden ball with a cross. But, when the municipality had to pay him, they offered him one-third of what they have agreed. The master thanked them but, unsatisfied, during the night swapped the ball with a gold-painted pumpkin.

Over time, the pumpkin deteriorated and fallen into many pieces. So they discovered the joke. 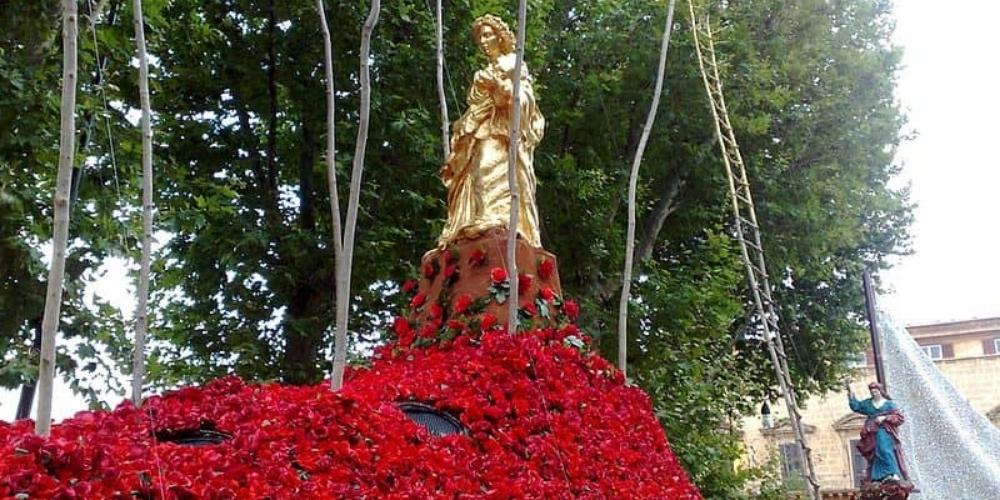 One of the deepest events in Palermo is Santa Rosalia's Feast, patron saint of the Sicilian city. The feast is the night between the 14 and the 15 July. They bring the chariot triumphantly along the parade till Foro Italico, where there is the fireworks show.

One of the main aspects of this feast is the food and wine. During the celebration, you can taste typical dishes, such as the boiled octopus (in Sicilian "l’u purpu vugghiutu"), Sfincione, a symbol of Palermo street food (a sort of soft bread dressed with a sauce of onion, anchovy, caciocavallo cheese and breadcrumb), and then, snails and frozen watermelon. 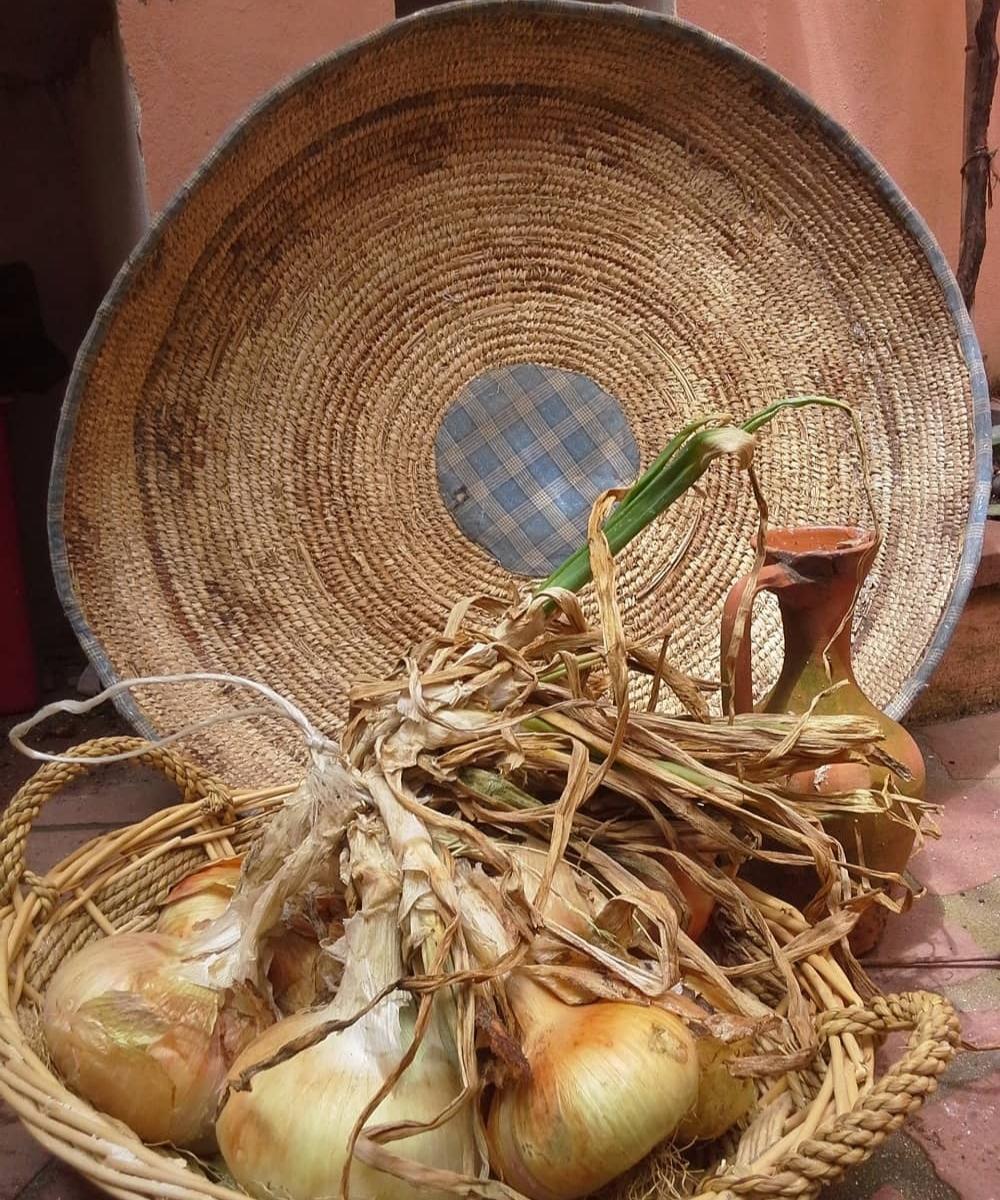 On Saturday, 23, and Sunday, 24 July 2022, the Sagra della Cipolla Dorata (Golden Onion Festival) will take place in Banari. Banari is a town of Meilogu, not far from Sassari. Indeed, the golden onion is a typical product that grows up only here.

You can taste typical dishes made of the delicious protagonist onion, drink good wine and walk along the ancient streets of the village. There will be the occasion to buy on for the entire Summer these big, sweet and tasty onions, famous everywhere in Italy.

The festival will be in Piazza Umberto I. During the event, there will be stalls of local handcraft, folkloristic music entertainment and much more.

The event's organizers are APS Pro Loco di Banari and Camera di Commercio di Sassari. It is part of the Salude & Trigu project, a platform to promote Northern Sardinia which includes all the most fascinating events in the area.