Sugared almonds of Sulmona: an ancient art in the heart of Abruzzo

Italy, as we know, is a land of culinary traditions. One of the most original and old is that of the Sulmona "confetti", a small almond-based delight.

Who knows what the great poet Ovid would have thought if he had known that his fame would've been overshadowed, one day, by a small and simple sweet of almonds and sugar. Sulmona, a beautiful city of art located in the middle of Abruzzo, is in fact almost more famous for its confetti, as they're called in Italy, than for being the birthplace of the famous author of the Metamorphoses.

The confectionery tradition of the city, however, is also very ancient and seems to have been appreciated since the time of the Emperor Tiberius. Certainly even today the Sulmona sugared almonds tickle both noble palates, such as those of the royals of England or Qatar, as well as those of common people who visit or inhabit the city. It's not just a matter of taste, though. The confectionery shops that can be found almost everywhere in town surely are a sight to behold as the confetti are produced in a huge variety of colors, and more often than not they get assembled to form compositions as simple as small and delicate flowers, or as complex as real sculptures.

The origins of the sugared almonds of Sulmona 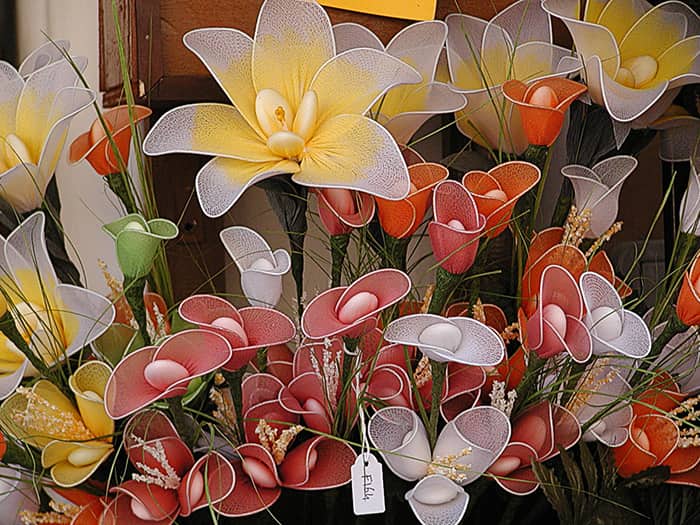 It could be said that sugared almonds have always existed in Sulmona. According to various testimonies these small sweets were already known and loved in the times of the ancient Romans, who used them as precious gifts. Even the italian name, confetto, comes from the Latin conficere, which means to prepare.
Much later, in medieval times, sugared almonds were still an integral part of local traditions, in particular of weddings. Boccaccio in the Decameron describes the custom of throwing handfuls of confetti at the bride and groom on the wedding day, for good luck. It is a habit that has never disappeared and is still alive throughout Italy even now.
In Sulmona small bouquets made of sugared almonds are very popular, they are wrapped in a silk so impalpable as to seem transparent, in very light tulle or even in plastic. These beautiful creations are due to the Poor Clares of the local convent of Santa Chiara, who apparently were the first to come up with these miniature works of art to be given to young nobles brides on their wedding day, since the 15th century.
Initially confetti were made of almonds and honey, but when sugar began to spread in Europe, the confectionery masters replaced more and more often honey with sugar, giving their sweets the shape and flavor we know. However, for some time sugar remained a rare and expensive ingredient and this meant that sugared almonds were considered for an equally long time almost an elite product, which few people could afford, albeit with some exceptions. On the occasion of important anniversaries, such as for the feast of the Assumption celebrated on August 15th, the nobles of Sulmona used to give confetti to common people by throwing them from a cart.
Over the centuries, the small town of Abruzzo has seen the flourishing of numerous confectionery factories that have elevated the production of these delights to a true form of art, appreciated and recognized in Italy and in the world. Although today the Sulmona sugared almonds are within everyone's reach, quality has indeed never been overlooked, so Sulmona is very proud of its supremacy, and rightly so. There have been specialized pastry shops for centuries, which have handed down their mastery from generation to generation and there is even a museum dedicated exclusively to the art of confectionery.

Say it with a sugared almond

Flowers, bunches of grapes, garlands, ears or even small animals, the artists of the confetti of Sulmona are able to create the most varied shapes, but the colors should not be chosen at random. In fact, tradition associates a very specific meaning to each of them: the classic sugared almond is a wedding gift and is white, so even today wedding favors contain white sugared almonds.

Pink and light blue confetti are used to celebrate the birth or first communion of girls and boys, while red is the color of the graduation, but also of the so-called ruby wedding, which celebrates 40 years of marriage. Gold and silver wedding anniversaries are celebrated with confetti in their respective two colors, while green is due at engagement parties. For those lucky enough to celebrate 75 years of love, white is back, but every anniversary has its own color and there are actual guides to learn how to choose the right one.

A multicolored bouqet, on the other hand, is perfect for celebrating a birthday. In any case, the sugared almonds should always be in an odd number, for good luck. Even a single confetto can be a meaningful gift to celebrate a truly unique event.

How the Sulmona sugared almonds are born 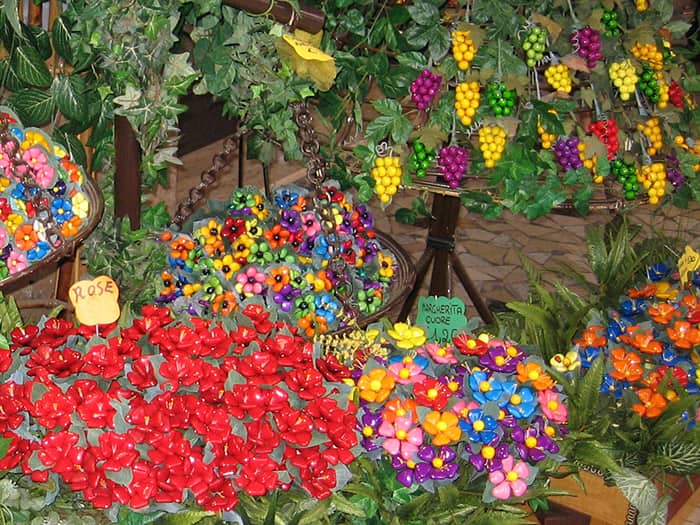 The process by which a sugared almond is made has remained more or less unchanged since ancient times. The core, called the soul, is traditionally made up of an almond and is very important because it gives both shape and flavor. In Sulmona local products are used, such as almonds from the Peligna Valley, but alternatively the excellent Sicilian almonds from Avola, with their typical flat and elongated shape, can be easily found.
Shelled and skinned, the almonds are placed in large rounded copper pots, called bassine, which rotate slowly, for some time, until the sugar reduced in syrup adheres perfectly to the almond. The process is repeated several times because it takes many layers of sugar to reach the ideal thickness. It's also to be notetd that a high quality sugared almond should absolutely not contain starch or other thickeners.
The next phase is that of smoothing and it is equally important because it gives the candy the perfectly neat and shiny appearance it should always have. Finally, there is the coloring, which is followed by drying.
Over time, numerous variations have been added to the basic recipe and the pastry chefs of Sulmona have given free rein to their imagination by adding spices or inventing new flavors. Today you can indulge yourself with sugared almonds of an infinite number of different aromas and tastes, from aniseed to cinnamon, from chocolate, to rum, to roses and so on. It is not at all uncommon, in Italy, to have wedding buffets dedicated exclusively to confetti of all kinds. Even the core can vary if almonds are replaced, for example, with hazelnuts, pistachios, orange peel or walnuts, to name a few, to obtain ever new flavors and shapes.