The most beautiful villages in Italy: Venzone, a living room within the walls

The Friulian village of Venzone rises on the left side of the river Tagliamento, in the province of Udine and since 2017 it has been part of the Most Beautiful Villages in Italy.

Venzone is not only one of the most beautiful villages in Friuli-Venezia Giulia, but also in Italy. In fact, a few years ago, it was elected as the most beautiful village in Italy for the 2017 edition of Il Borgo dei Borghi. Venzone is a small medieval village of 2000 inhabitants. It is located in the province of Udine, not far from the banks of the river Tagliamento. If today it is possible for us to see and visit the village where it was and how it was, it is only thanks to the meticulous work of reconstruction after the 1976 Friuli earthquake destroyed most of the small town. The medieval village of Venzone is located 230 meters above sea level at the confluence of the valley of the Tagliamento and that of the Canal del Ferro. In 1965 the village was declared a National Monument since it is the only fourteenth-century fortified village in Friuli-Venezia Giulia and it subsequently became one of the most extraordinary examples of restoration in the architectural and artistic field. Indeed, following a series of seismic events that in 1976 managed to bring the wonderful medieval village to its knees, damaging it severely, after not even 20 years, thanks to the strength and will of its inhabitants, Venzone was reborn through a restoration by anastylosis, that is the reconstruction of buildings obtained through the recomposition, with the original pieces, of the ancient structures, as it was and where it was. 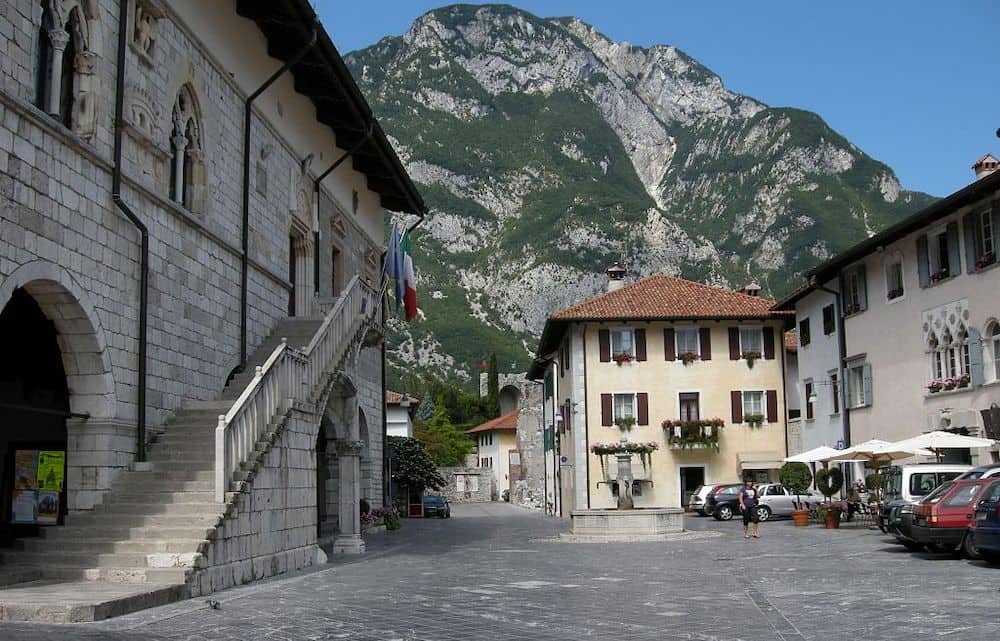 Since 500 B.C., the age of the Celts, Venzone represented an important site thanks to its strategic position as an obligatory passage towards the north; later the Romans made it one of their control posts along the route of the Via Julia Augusta, which from the site of Aquileia led to what is now central Austria. However, the first and proper urban center dates back to the Carolingian domination, 923 AD.

In 1200 the Patriarch of Aquileia gave the land of Venzone as a feud to the Mels family, which increased its prestige and in 1258 Glizoio di Mels had the town fortified with a double wall, preceded by a deep moat, which can still be admired today. The control of the walled citadel then passed from the hands of a Lord to another until the arrival of Venice, at the end of the XIV century. It remained under Venetian rule until 1797, when it was occupied by Napoleon's French troops. Finally, in 1866 the small town became part of the Kingdom of Italy. In 1976, from May to September, a series of seismic events hit Friuli hard, seriously damaging the village of Venzone. After not even 20 years, with the strength and the will of its inhabitants, the town was reborn thanks to the reconstruction of the Town Hall in 1984, of the Historic Center in 1988 but above all with that of the Cathedral in 1995, symbol of the earthquake and of the rebirth, restored by anastylosis. The city was rebuilt stone by stone; about 9500 stones were relocated to the place they occupied before the earthquakes.

The Duomo and the historical center 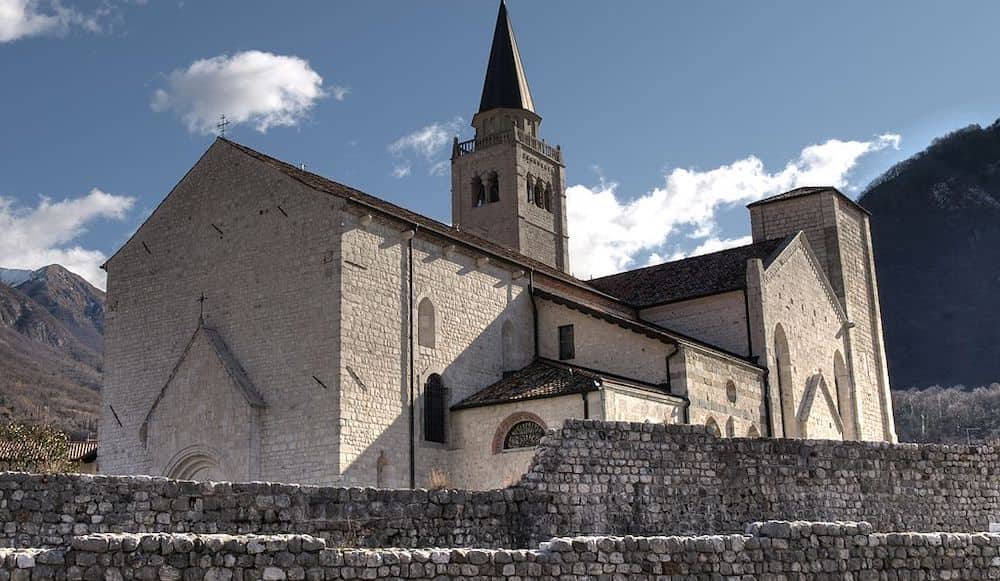 The central point of the village is Piazza del Municipio, characterized by the presence of a fountain in its center. Overlooking it there are Palazzo Comunale, in Gothic-Venetian style dating back to 1400, and Palazzo Radiussi, an aristocratic residence also dating back to 1400. However, the symbol of the town and of its post-earthquake rebirth is its Romanesque-Gothic Duomo of 1300, the church of Sant'Andrea Apostolo. The town of Venzone is also surrounded by a large moat and an interesting double circle of walls dating back to the 13th century, making it the only fortified medieval town in Friuli-Venezia Giulia.

The mummies of Venzone 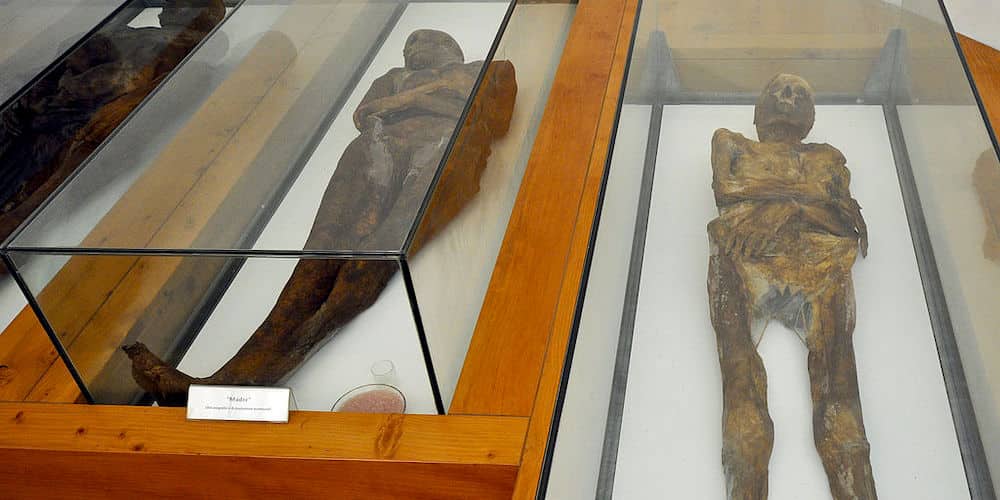 In the front parvis of the Duomo we find the Chapel of San Michele built in 1200 and actual seat of the permanent museum dedicated to the Mummies of Venzone, belonging to a period between the 14th and the 19th century. These mummies were discovered in 1647, during the works of enlargement of the Cathedral, and are the result of a mummification process which is not the result of the intervention of man but of a natural phenomenon, due to particular environmental conditions that occurred inside some tombs. 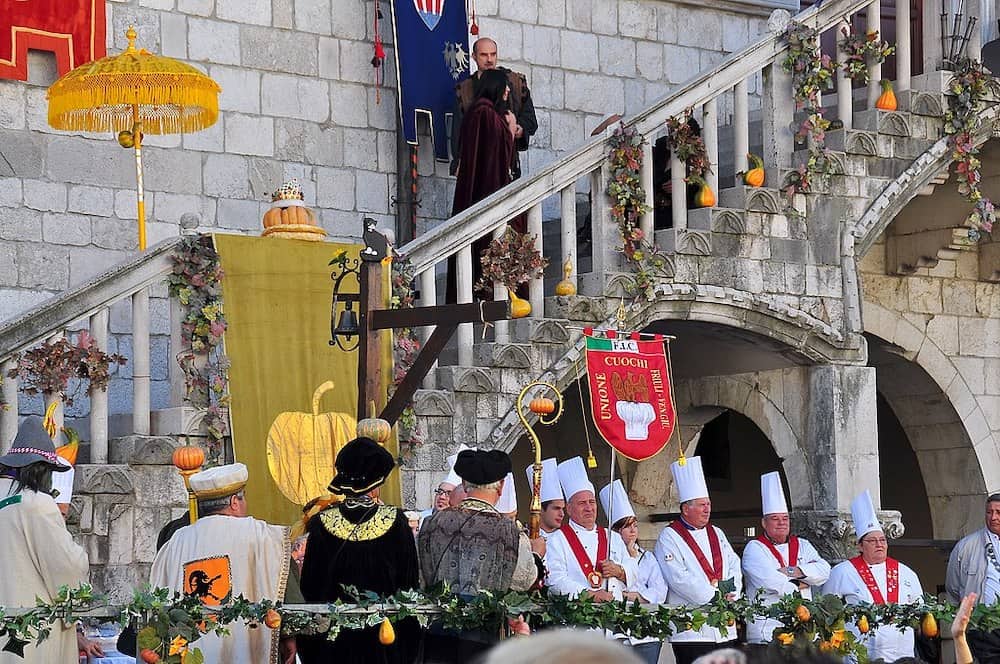 The Pumpkin Festival of Venzone is held on the fourth weekend of October every year since 1991 and it is one of the most important pumpkin festivals in Italy. As if by magic, the historical center of the small medieval village comes alive thanks to musicians, jugglers, fire-eaters, noblewomen and knights and is set up in every corner with pumpkins of every kind. At the event it is possible to taste pumpkin dishes and take part in the contest for the longest and the heaviest pumpkin. The event has been postponed to October 22-23, 2022.