Art and culture of Sardinia Sardinia has gone through an intense historical journey, the initial indigenous cultures were joined by multiple contributions of civilizations from the Mediterranean world. The finds and precious testimonies of the past are collected and kept in numerous museums and archaeological parks scattered throughout the territory.

The Neolithic period was the period in which the first artistic manifestations were found. Numerous findings of the typical statues of the Mother Goddess and ceramics engraved with geometric designs testify to the artistic expressions of Sardinian prehistory. The union between the Nuragic populations and the merchants coming from every part of the Mediterranean led to a refined production of gold jewels and ceramics.

Food and flavours of Sardinia 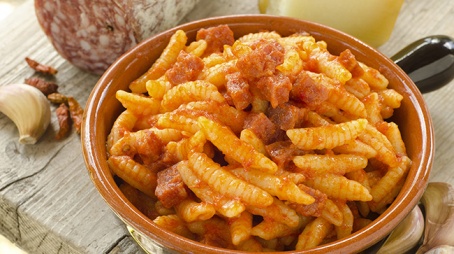 The Sardinian cuisine is very varied and is based on ingredients derived from both pastoralism, fishing and agriculture. Wild boar and pork hams, sausages, accompanied by olives and mushrooms are very popular as appetizers. The typical dishes are: the malloreddus, the culurgiones, whose ingredients change from town to town, the pane frattau, the fregula, the zuppa gallurese and the lorighittas.

Places and tours of Sardinia Sardinia is the second largest island in the Mediterranean and more than 80% of its territory is mountainous and hilly. The rest of the territory is occupied by flat areas. The widest plain is the Campidano that separates the northern central reliefs from the mountains of the Iglesiente.

The coasts offer enchanting landscapes and wonderful views immersed in unspoilt nature. Not to be missed in Sardinia: The Archipelago of La Maddalena, the caves of Neptune, L'asinara, Castelsardom Cala Goloritzé.

Stories and traditions of Sardinia

Since the dawn of civilization, Sardinia has been a popular landing place for those who sailed the Mediterranean Sea in search of commercial opportunities. Its strategic position has allowed the island to collect abundant evidence of the presence of the major ancient colonial forces. The region has gone through three historical periods: the Nuragic period, the Judicial period and that of the Kingdom of Sardinia.

There are many traditions and festivals that affirm the strong cultural identity of Sardinia. The most popular festivals are: St. Efisio in Cagliari, the Faradda di li candareri (proclaimed an oral and intangible heritage by UNESCO in 2013) in Sassari, the Sardinian Ride in Sassari.

Many Sardinian traditions have been proclaimed a World Heritage Site by UNESCO: The Nuraghe and the expressions of the Nuragic civilization, the singing a tenore, the singing of the Sibyl, the Faradda de li candareri.