The Celebrations of the Big Shoulder-borne Processional Structures: Intangible Cultural Heritage of Humanity by Unesco

The Association of the Celebrations of the Big Shoulder-borne Processional Structures was born in 2006 and includes four Italian religious feasts (the Santa Rosa Machine in Viterbo, the Gigli Feast in Nola, the Varia of Palmi and the Faradda di li Candareri in Sassari). Since 2013 this group is into the Intangible Cultural Heritage of Humanity by UNESCO.

The Santa Rosa Machine in Viterbo

The Santa Rosa Machine is a tower illuminated by torches and electric lights. It's high around 30 metres and weighs 5 tonnes. It's made with light metal and modern materials such as the fibreglass that lastly has been replaced by iron, wood and papier-mache.

This Feast takes place in Viterbo, every year, during the night of the 3rd of September. During the parade, the machine is raised and carried on the shoulders of hundreds of men, called "Santa Rosa's Porters", along a path long a little more than a kilometre. This path is characterized by very straight streets and the city centre's squares.

The parade starts at 9 P.M. and is attended by thousands of people. From this point on, the streets are darkened to bring out the Machine's light.

The Varia of Palmi in Calabria 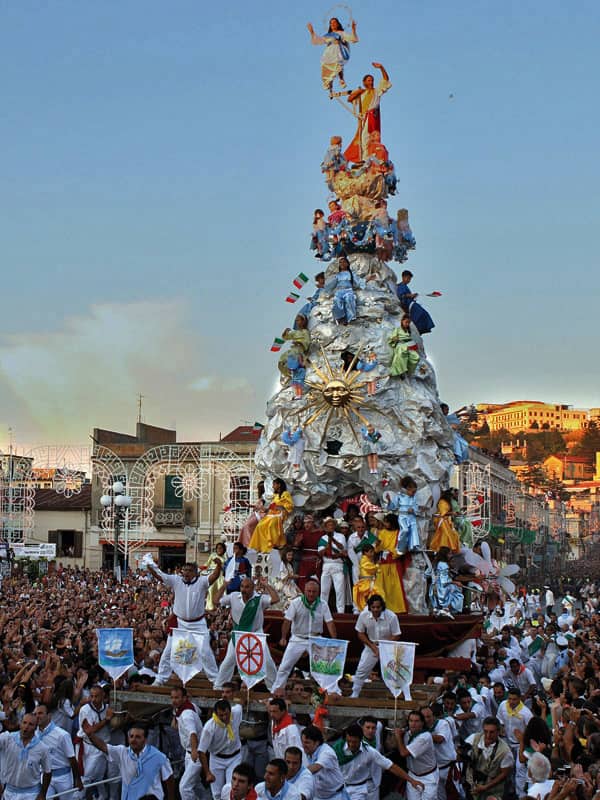 The Varia of Palmi is a folk Catholic feast in Palmi, a metropolitan city in Reggio Calabria. The fest is in honour of Maria Santissima della Sacra Lettera, the patronage and the protector of the city.

Currently, the feast is celebrated every year on the last Sunday of August, but during the past, it often used to be necessarily cancelled, almost risking the oblivion. For example, in the late 19th century, often, during the parade many people used to start fighting and so the organisers decided to abolish it because considered "uncivil". From the early 20th century to the beginning of 2000s, there were only 27 editions of the feast. With the UNESCO recognition, it has started to be celebrated every year, securing its future.

The event is probably the main feast in Calabria. But what is the Varia?

The Varia is a huge float that represents the Universe and the Assumption into Heaven of the Virgin Mary. The float is high 16 meters and carried on the shoulders of 200 men, called Mbuttatri (carriers). On top of it, there are human figures who represent the Virgin, the Heavenly Father, the Apostles and the Angels.

The day before the Varia's parade, there is the procession of Maria Santissima della Lettera's portrait and the Sacred Hair's reliquary. Traditionally, it's said to correspond to the Virgin's hair.

The Gigli Feast in Nola 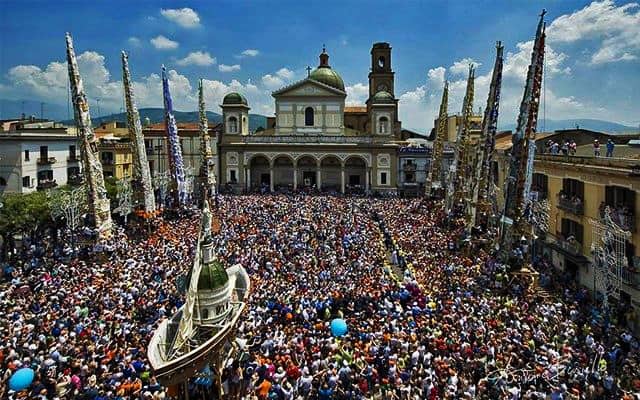 The Gigli Feast is a folk Catholic festival that takes place every year in Nola (a metropolitan city of Naples) on the occasion of the festival of its patron saint St. Paolino. Through this event, the Nolan citizens celebrate the Ponzio Meropio Paolino's return to the city from the Barbarian prisons during the first half of the 5th century.

The feast takes place every year on the Sunday after the 22nd of June. It consists of the dancing parade of 8 wooden obelisks called Gigli and a shorter boat-shaped structure that symbolizes the boat that brought St. Paolino back. The Gigli are decorated with papier-mache and take the name from the ancient guilds of arts and works, respectively: Ortolan, Grocer, Tavern Keeper, Baker, Boat, Butcher, Shoemaker, Blacksmith, Tailor.

Gigli and Boat dance along a traditional route located in the oldest area of the city. Through the use of some boards called varre and varritielli, they are raised and controlled on the shoulders of men called cullatori. Their name means "to lull", probably because of their swinging motion during the parade. To lift a Giglio 128 cullatori (men) are needed, and together they form the Paranza (team).

The "dancing" proceeds to the rhythm of original songs played by a music band set on the base of the structure.

The event covers the entire day. In the morning, Gigli and Boat are carried in Piazza Duomo, the main square in Nola, where there is the solemn blessing given by the Bishop. From the afternoon to Monday's sunrise, the structures and their cullatori will face spectacular challenges during the traditional path. 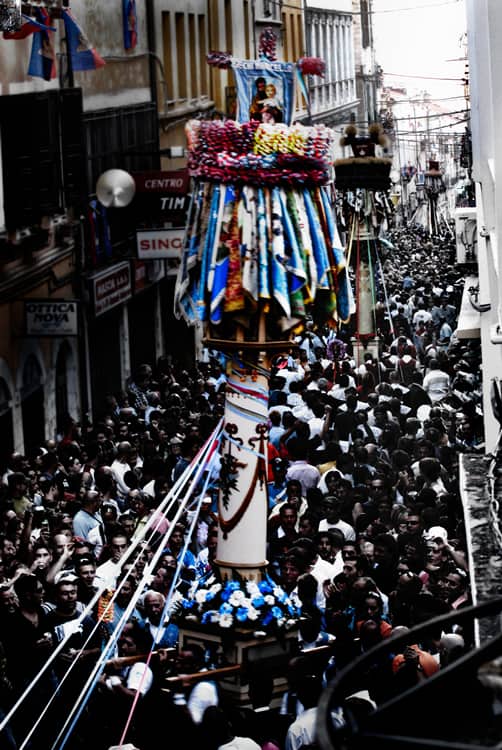 The Descent of the Candles (in the local dialect Faradda di li Candereri or just Faradda) is a feast in Sassari (Sardinia). It takes place during the night of Our Lady of Mid August (on the 15th of August).

It consists of the dancing parade of big wooden pillars, the symbolic "candles" (li candareri). It runs through all the city centre until reaching the Church of Santa Maria di Betlem.

The event is also known as Festha Manna, which means "Great Feast" and, according to the tradition, it comes from a vow to Our Lady of the Assumption, who saved the city from the plague.

The feast had a crisis period between the late 19th century and the beginning of the 20th century. But currently, it is a very popular event followed by 100,000 people, who reach Sassari from every part of the world.