Is Sardinia just a summer destination? Are you ready to discover an authentic Christmas in the heart of Sardinia?

Sardinian is a proper tongue, and it is interesting to know how the ancient Sardinian tradition reminds Christians of religious celebrations. The Sardinian Christmas name is Sa Paschixedda (or Pasca de Nadale in northern Sardinia).

The Sardinian Christmas tradition takes origins in its shepherd culture. Usually, before Christmas, the shepherds led their sheep to pasture, travelling along the whole region. These movings forced them to be far from home for a long time and so, also to have few occasions to meet their families.

So Christmas, moreover to be a symbolic and religious celebration, also represented the going back home. This value and meaning are not changed! Nowadays, Sardinian people are mainly emigrants: most of the population lives abroad or in another region of Italy. And so, for them is essential to go back to Sardinia for Christmas and stay with their family.

Christmas Eve is called Notte ‘e Xena (dinner night or whole night). This day used to be the moment of family reunion. All the generations used to meet each other around a fire made by log called Su Truncu de Xena. They used to cut it for a particular purpose: it must last and be warm for the entire Christmas time.

Of course, the main Christmas protagonists were children: they could stay up late for the occasion. The elders told them morbid stories about local myths without filters and traumatizing.

The stories told about witches.

There was the story of Maria Mangrofa, a witch who used to eat all the children in Orosei; Maria Puntaoru, who used to touch the children tummies while they were sleeping and if they were empty, she would spear their bellies with a golden and sharp skewer; Or still, Palpaèccia, who used to punish who had lousy behaviour, slipping in their room and putting huge stones on their tummy.

Anyway, these legends were not only to terrify the children and encourage them to observe the rules but also for adults, often blinded by hatred and greed.

Christmas holidays mainly were a moment of escape. So, the toys used to cover a particular role. The most common was Su Barrallicu, a four-sided spinning top, and on each of these, there was a letter: T for "Tottu" (everything), N for "Nudda" (nothing), M for "Metadi" (half) and, in the end, the most unlucky, P for "Poni" (leave). In turn, the children spun the spinning top, and when it stopped, it gave precise control to the player: if the letter T came out, you were lucky and could take the entire game loot; otherwise, if P came out, the player had to leave all their part. The booty consisted of nuts, chestnuts and dried fruit.

These are the history and traditions that make the Sardinian Christmas unique, but now let go to discover three must-see events during this period in some of the most characteristic villages in North Sardinia. 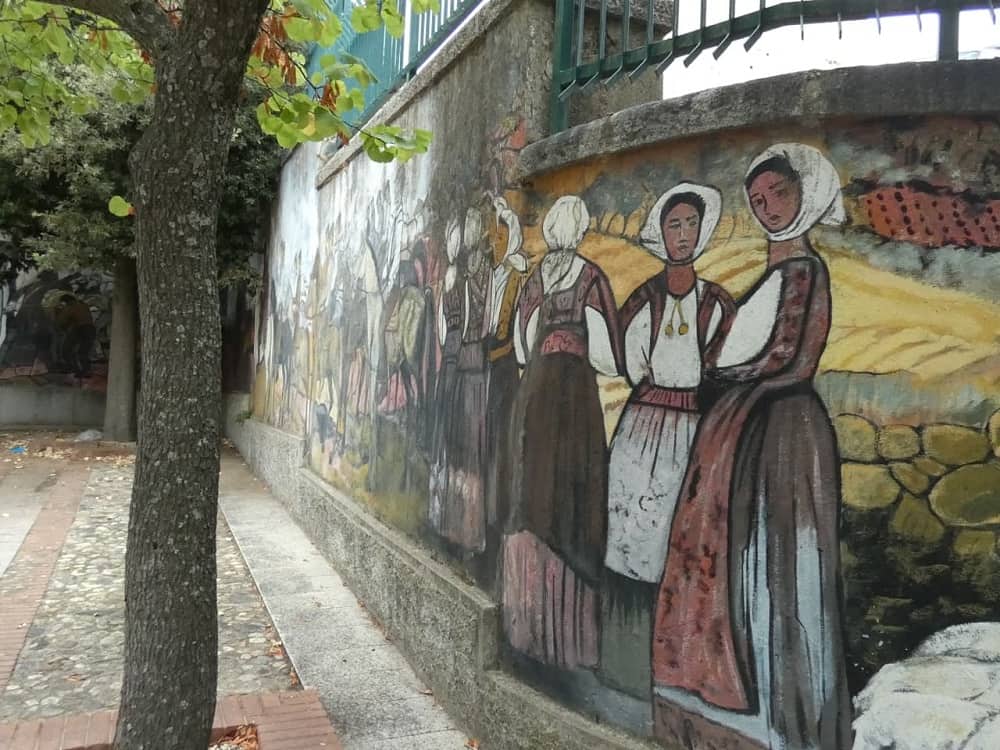 Bono is the most crucial village in Goceano, North-central Sardinia area. It is characterized by suggestive and delicate landscapes and linked to old traditions. Bono rises to over 500 meters high on the mount Rasu slopes. It is a village of 3,600 inhabitants in the province of Sassari and is strongly linked with the Nuoro area.

Its local pro loco organizes thematic events during the Christmas holidays, like the "Presepe in Carrella" competition. The "Carrellas" are the neighbourhoods of the village, whose during these days host nativity scenes, craftsmanship, and theatre performances, books presentations, guided tours, and gastronomic events. Everything on a Christmas theme and to let know the local rites and traditions.

Bono is made of 8 historical quarters (Carrellas). During the Nativity scene's competition, every quarter has its Nativity. The winner is chosen according to some criteria: the making in the complex, accuracy and proper care, artistic and devotional aspect, recycling of the materials, craftsmanship, chromatic effect, setting and special effects, message and proposed values.

Into the historical region of Logudoro, in the North-West of Sardinia, about 10 km from Sassari, there is Usini. Every year, since the early 2000s, there is the "Ajo e Ippuntare", the new wine feast. Indeed, Usini is one of the most important Italian cities for wine. Its wine producers have won significant awards like Vinitaly.

Moreover, the willingness to promote its wine, the event wants also to rediscover the old culinary, cultural, folkloristic and historical traditions. Usually, it starts on the second Saturday of December because it often matches the development of wine ageing.

Not only testing of local products but also educational workshops for children, such as the traditional costume making and the computer lab about detecting archaeological sites. Culinary workshops for learning to make typical cakes, holidays bread, and Sardinian pasta.

You can take part in guided tours of several historical palazzi, churches and monuments, and enjoy the music events. Probably, there will also be a  marathon, where many regional athletes will attend.

The local pro loco organizes the event. For more info, we invite you to contact the contact person Antonella Masia:

Berchidda is a village of Gallura, next to the Logudoro border. During the Christmas holidays, it becomes a magical place. Here take home one of the most beautiful Christmas events in Sardinia: "Notte de Chelu". In collaboration with the local Pro Loco, the nine quarters inhabitants come together to prepare huge nativities.

The tiny village dresses festively from the weekend after the Immaculate in December, becoming a proper open-air museum. Notte de Chelu's nome takes origin from one of the most famous traditional Sardinian Christmas songs. Pietro Casu wrote it: priest, writer and scholar of Berchidda, who died in 1954 and wherein the main square of the village there is a small and fascinating museum dedicated to him. Indeed, during the event, this and other Sardinian Christmas songs play in the streets.

The event's tradition wants the inhabitants of each quarter to decide how to develop their nativity, and after choosing the "project", they commit to. During the exposition, the commitment is also in keeping: it has to keep in the best way, preserving by sudden rains, humidity in the night, etc.

Different choirs walk from nativity to nativity during the festival, singing Christmas songs and offering pastries and a glass of wine to visitors. Indeed, throughout the event, you may taste the great food and wine and cultural offer that Berchidda can give.

There are polyphonic choirs, folkloristic bands, and any international artists that you may enjoy in the town until the Twelfth Night. Then high-impact food and wine and handmade production: during the festival, you can buy local wines, distillates, salami, cheeses, pastries, fresh pasta and handmade products.

These three events are part of the calendar offered by the Sassari Chamber of Commerce, currently covering the territories of the two provinces of North Sardinia, Sassari and Olbia-Tempio.

Salude e Trigu is a project that unites the events of Northern Sardinia into a single storyline. These are small and large events that allow you to experience the beautiful territory of North Sardinia uniquely and authentically.