The Carnival of the gods: traditional masks of Sardinia's heartland

Sardinia is an island of magic. An ancient world of mysterious creatures and arcane rituals comes alive at certain times of the year, such as Carnival. Are you ready for a journey beyond imagination?

We had heard of creatures who, with the heavy sound of cowbells in the distance, announce their imminent arrival. We had often been warned that this island is no place for us if we don't believe in magic. They had told us that, on certain occasions and at certain times of the year, in this ancient land kissed by the sun and whipped by the wind, arcane creatures awaken and take possession of villages, towns and time. It is the past that walks the streets, and it is the world of Sardinia's magical beings that take back its land and enter under the skin of those who observe its reawakening. One day, on a cold January afternoon, this arcane world revealed itself to the eyes of those who, like us, believed they were watching a simple Carnival parade. Dull sounds, heavy movements, rough sheepskins, traditional masks carved in wood reproducing gloomy and austere faces. They look human, but are they demons? Or gods?

In Sardinia, among people who have remained secluded and almost isolated from the rest of the world, a primitive faculty of mixing reality with legend and dream persists, more than in other regions.

The magical land of Barbagia and its traditional masks

In the heart of the Mediterranean, Sardinia is world-famous for its sea of a thousand colours, but most people are unaware of its profound essence. This beautiful island has an ancient soul that emerges in all its splendour when popular festivals and events such as the Barbagia Carnival parades revive old traditions and beliefs. Every year on 16 January, with the bonfires of Sant'Antonio Abate, the Sardinian Carnival begins. "Su Karrasecare" (Carnival in the Sardinian language) has many faces. The struggle between man and nature is the most recurrent theme, and the common denominator is almost always the long agro-pastoral tradition.

Barbagia, in the heart of the island, is a mountainous region where the wind blows, whispering words in an ancient language, and creeps through the furs of the participants, who take on the semblance of gods, demons and creatures half-man and half-beast. The mountains of Ogliastra and Barbagia have specially shaped rocks that, when the sun rises, cast shadows on the earth that look like the silhouettes of strange creatures. In this perfect setting, the ancient rural tradition is brought back to life by those who lose their identity for a day to revive 'something' that goes far beyond a mask. Whoever wears this appearance says that he no longer understands whether he is wearing the mask or vice versa. In this way, the ancient divinities return and take possession of man's body, in a sacred moment where the dressing itself is an authentic religious-pagan ceremony, followed carefully, experienced as a sort of 'metamorphosis'.

The arrival of Mamuthones 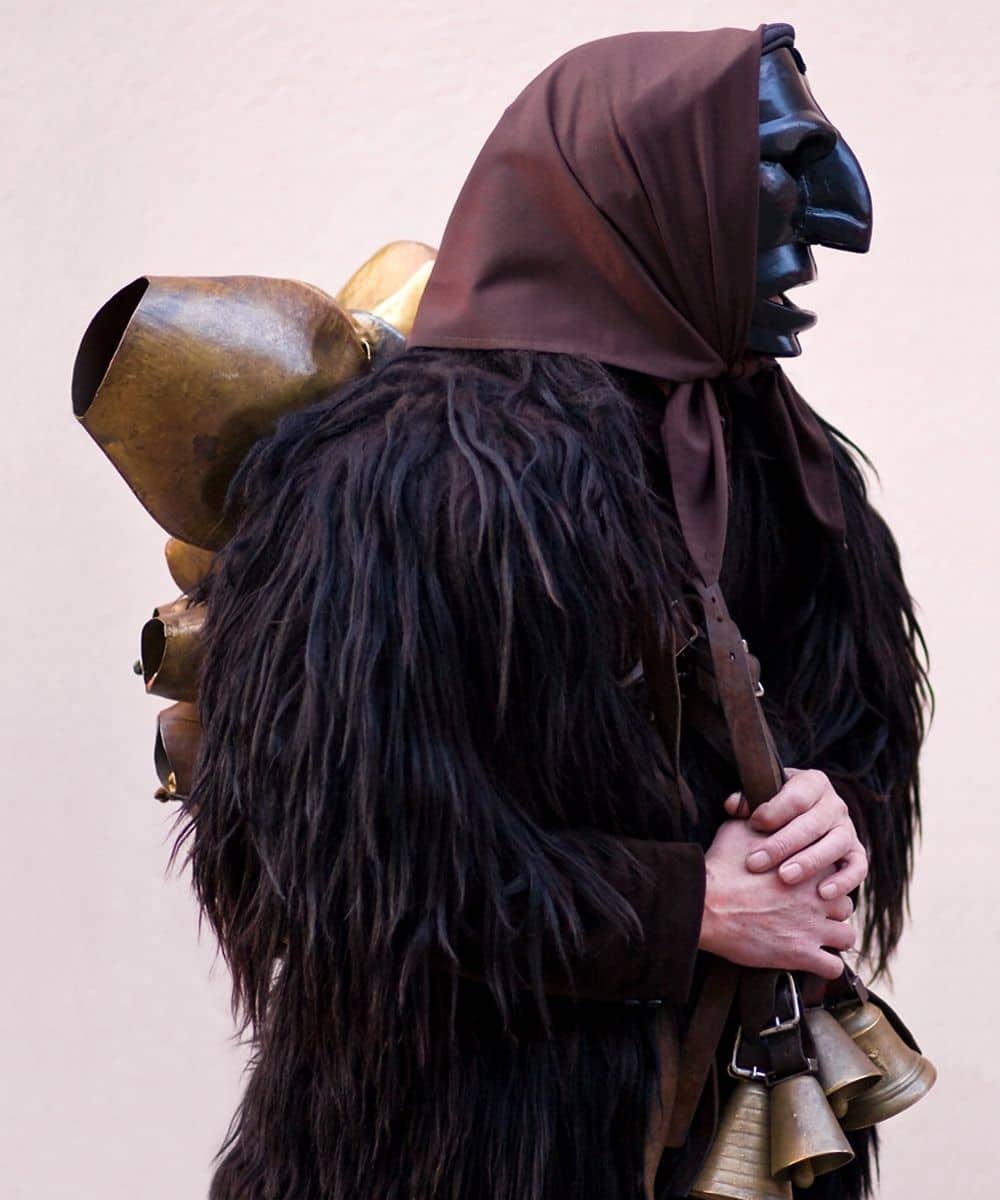 When we arrived in Mamoiada, we were curious to see the Mamuthones parade. The Mistral wind was blowing and carried the chatter of the people lurking along the roadsides in the air. Suddenly a dull sound of cowbells in the distance advancing in unison captured the attention of those present, like when the first thunder of the storm echoes in the sky or instinct warns us that something is about to happen.

The Mamuthones are the most famous of all Sardinian masks, and their appearance is awe-inspiring. Their faces are covered by 'sa visera', a mask with dark anthropomorphic features, and they wear black sheep furs and heavy cowbells. The Issohadores are the other soul of the Mamoiada Carnival; they are agile, colourful and elegant, and wear a white wooden mask, the traditional black cloth headdress, a red jacket and white trousers. We have seen the two figures parading together through the village streets in two parallel rows, creating a strange, almost jarring duality. The Mamuthones are dark and heavy, and their appearance contrasts with the white walls of the houses. They make a kind of 'danced procession' that advances slowly and somewhat awkwardly and seem wholly absorbed in their cadenced gait. Beside them, the Issohadores run hither and thither, tirelessly, and throw 'sa soha' (their rope) among the people. 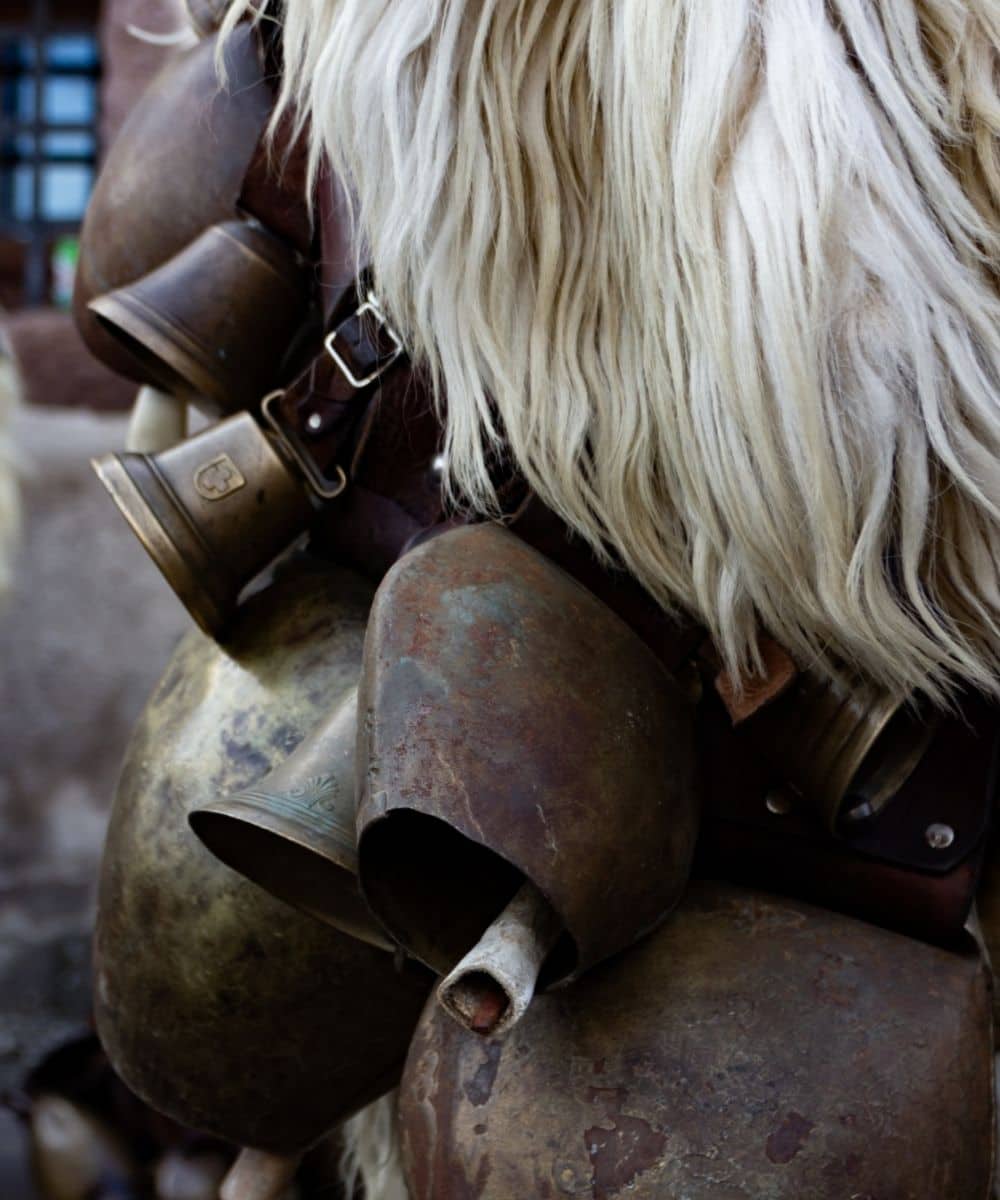 The last thing we remember of the Mamoiada Carnival is the hypnotic swaying of the Mamuthones. Without realising how, we found ourselves in Tertenia, a small town in the Nuoro area, as another creature was about to come to life. Today, as centuries ago, the god of rain is still invoked in Ogliastra and some centres of Barbagia by a population suffering terrible droughts. His representation reappears with different names in rituals of various villages. Suddenly, as we waited impatiently, figures with long horns and coarse fur appeared on the horizon: this is a recurring divinity in Sardinian culture, Su Maimoni. His masks parade through the streets of Tertenia, intoning: "Maimone Maimone abbacheret su laòre abbacheret su siccau, Maimone laudau!" (Maimone, Maimone asks for water for the wheat, asks for water for the dried, Maimone lauded!). Other figures make their appearance in all this, while the slow, cadenced dancing of the masks tries to earn nature's benevolence. But the ancient ritual did not stop there. In times of great drought, a small number of men would secretly go to the ossuary in the dark of night to pick up an odd number of skulls and... Suddenly we found ourselves sitting on the bed. Our hearts were pounding, and our breathing was laboured. Had it all just been a dream?

The ancient struggle between man and beast... 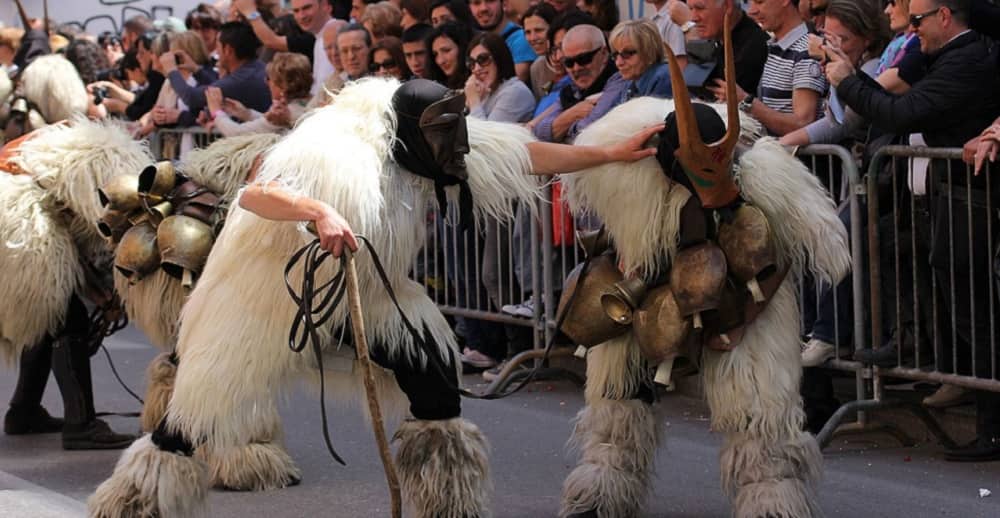 The next day it was time to set off for Fonni, a village on the slopes of the Gennargentu, in the centre of the island, surrounded by centuries-old woods. In all the rituals of Sardinian agro-pastoral culture, it is clear that nature is the great mistress of life and death, and another constant is the inseparable duality of two different figures that would make no sense without each other. Urthos and Buttudos embody the god of the dead and darkness, the former, and his guardians, the latter. The spectacle our eyes saw in the streets of Fonni is very different from the orderly and slow walk of the Mamuthones: here, a dimension linked to the earth is on stage, in a struggle between Man and Beast, good and evil. The mighty and agile Urthos, covered in sheepskin, dragged the Buttudos, who wore the characteristic black coat made of orbace (a woollen fabric typical of the island). Both creatures had their arms and visage blackened by soot. The Urthos wanted to create chaos and tried to climb everywhere, while the Buttudos attempted to subjugate them with a large iron chain and thus began an endless struggle, as old as the hills.

In Ottana, right in the heart of Sardinia, Boes and Merdules celebrate the Punic-Nuragic deity of the bull and the human being who tries to tame the beast. These monstrous wooden masks retrace agrarian rites full of hard work and gestures linked to the tradition of a country of pastoral origin, reviving its essence and consigning it to myth. The Boes represent the wild force of nature that does not follow any human rule; their mask has longhorns, a three-pointed star on their forehead and green leaves on their cheeks. The Merdules, on the other hand, are the "human face of reason" that wants to tame animal instinct but risks being overwhelmed by it. As they advance through the streets in a messy and, at times, comical struggle, the Filonzana impersonates an old woman who follows them and wanders through the crowd threatening to cut the thread of life that is wrapped around her spindle.

... and between good and evil 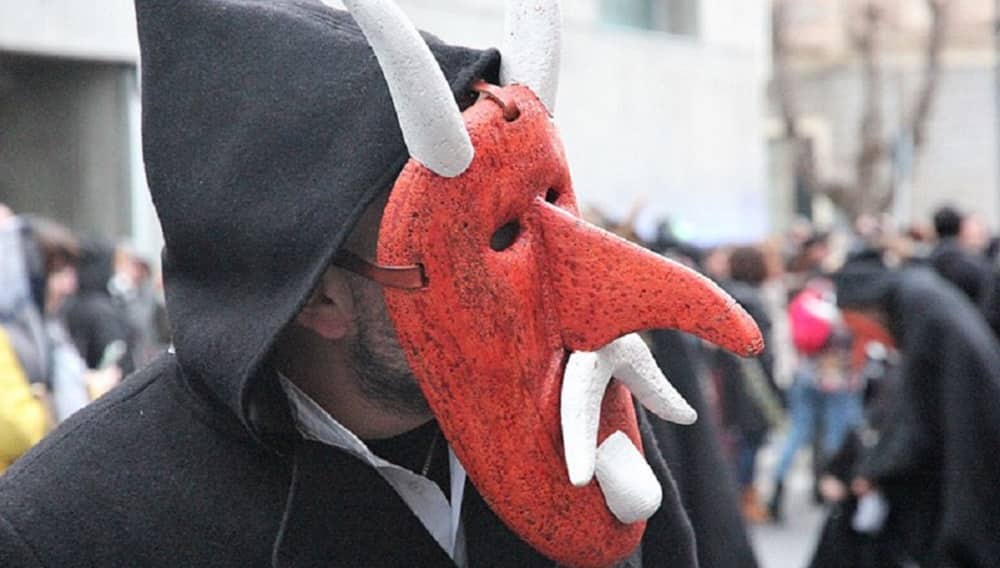 The last stop on our journey to discover the creatures of the Sardinian Carnival was Orani, also situated in Barbagia. Here the Bundos, from under their red cork masks, simulate the voice of the wind, like the lamentations of souls in pain. They have an ambivalent meaning: on the one hand, they are identified with the spirits of the harvest and rebirth, on the other, with the storms that devastate the fields. They wear orbace clothes, black representing evil, white good, and during Carnival, they go through the streets with their faces covered by their cork masks and pitchforks in their hands, making a great noise. The locals say that their voices could be heard on stormy nights until some brave young man pretended to be one of them to convince them not to devastate the harvest.

Once these events are over, the sun sets on the Mamuthones and the other creatures. Their ambiguous faces give way again to human features, and it is back to everyday life. Those masks hanging on the walls of so many houses remind us that Sardinia's spirits and magic deities are always present. They dwell in the air, earth, and soul of this magic island and in the wind that still seems to carry the sound of cowbells in the distance. In the evening, on our way home, a sudden flash of lightning ripped through the calm darkness of the sky. With our faces against the window, our minds wandered back to everything we had seen during those days. It was only a moment, but we could swear we heard the same moaning in the night, the same hissing of the wind. And there we knew: it was all true.

The Carnival of Sardinia and its creatures was an unforgettable experience, which made many certainties shake and made us enter a world we did not know. Trying to understand what we had witnessed, suddenly a clear feeling made its way into our minds. They are masks that, yes, hide the wearer's face but have the power to uncover the soul, an ancient, strong soul: the soul of Sardinia.