The most beautiful beaches in Italy

As true ambassadors of the beauties of Italy, we set ourselves an arduous task: to select the best beaches in Italy. Don't miss them!

As it happens in other countries bordering the Mediterranean, Italy has a love affair with its sea, which represents a spectacular tourist and environmental resource.

As we know it surrounds almost the entire peninsula and its islands for over 7000 km of coastline. These last ones have the most amazing shapes: from the small inlets to the widest and sandy coasts. Italy certainly has all this and is in fact famous for its small and large resorts by the sea, known for their beautiful beaches with dreamlike environments. As true ambassadors of Italy and its countless beauties, we have set ourselves an impossible task: select for you the most beautiful of them all, do not miss them!

In fact, after this little excursus, you will realize that it is really impossible to make a reasoned selection without excluding dozens and dozens of places that deserve to be on this selection of the most beautiful beaches in Italy.

La Pelosa Beach in Stintino is certainly one of the most famous attractions of Sardinia, practically a masterpiece of natural art. The white and fine sand creates unique transparencies in the whole peninsula. Low seabed and water at the ankles for many meters. The nuances between sky and sea are of all kinds of blue and azure, practically as in an island in the Caribbean Sea. Taking a bath here improves the mood and steals the heart because La Pelosa is not only one of the most beautiful beaches in Italy but one of the most incredible places in the world.
In the province of Sassari, it is possible to combine a seaside holiday with the discovery of the area, food and wine and culture, by taking part in the events of the Salude & Trigu programme.

FIND OUT MORE ABOUT THE EVENTS OF SALUDE & TRIGU❯ 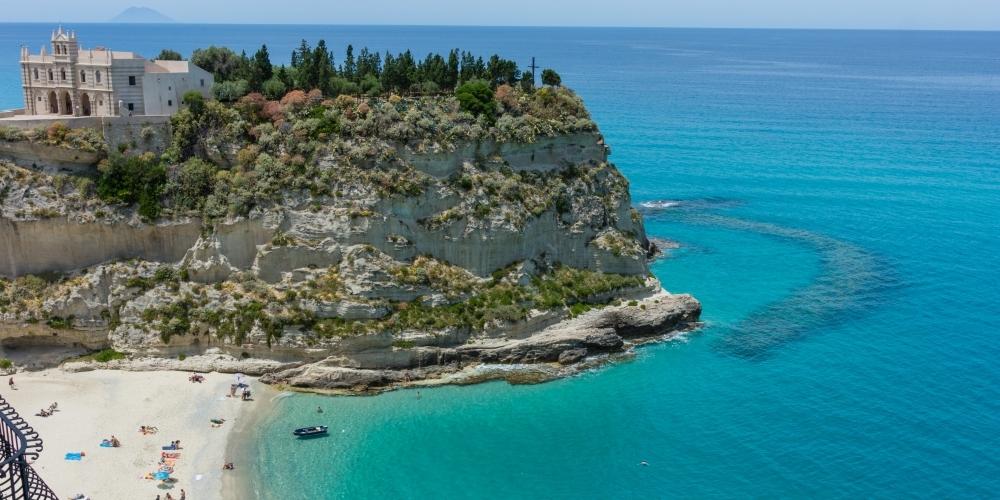 Among the most beautiful beaches in Italy, you cannot miss this unique setting where the city merges with the sea through a very steep rock face. The sea of Calabria always has bright colors and tending to blue with immediately deep waters. Once you arrive on this huge expanse of sand, just raise your head upwards to realize how much wonder there is in this land. 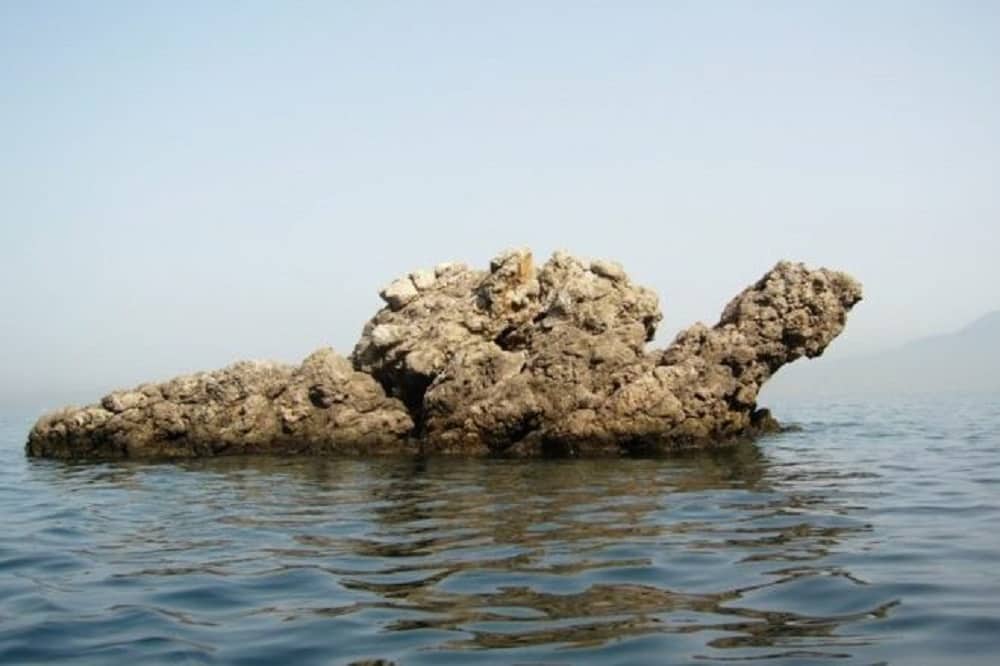 Vico Equense is the largest municipality on the Sorrento Coast: there are several beaches, known because the sea has been awarded the Blue Flag title. The Spiaggia della Tartaruga (Turtle Beach) is one of the most beautiful beaches: this is a very "wild" beach, with intense colours and the purity of deep and crystal clear waters, so named for the presence of a rock that comes out of the water and that reminds precisely the marine animal. It is reachable only by sea with the help of small local boats. For this period is necessary the reservation; being exposed to currents and being from the beginning quite deep, it is not a place suitable for families with children but rather for lovers of nature more uncontaminated. The rocky confirmation in the morning is shaded and then be "overwhelmed" by the sunny afternoon.

The Spiaggia dell'Arcomagno (Beach of Arcomagno) is located in San Nicola Arcella in Calabria. A beach also a bit 'wild reachable on foot through a path gradually more and more treacherous. It is recommended to wear comfortable shoes and to go in the early morning hours to fully enjoy a wonderful show: the deep blue bottom is truly unique. The environment consists of large stone arches and a beach of fine pebbles. 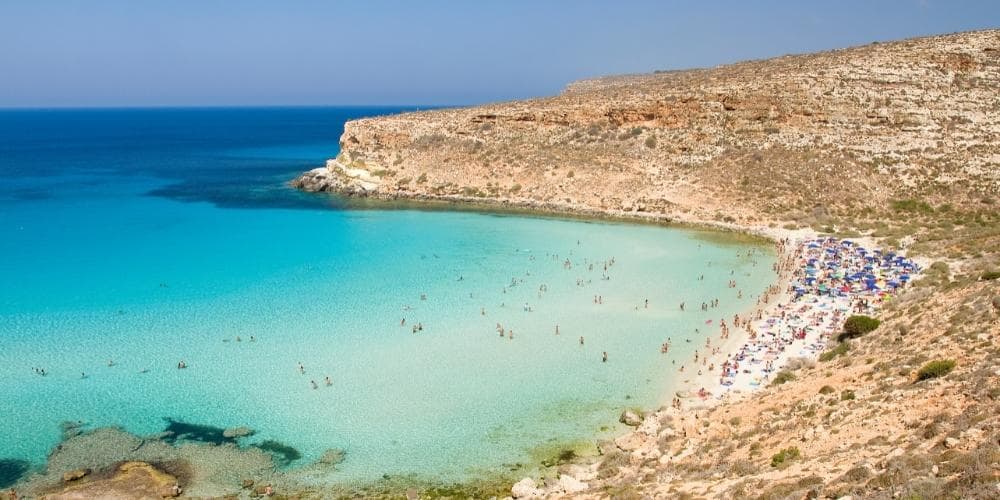 The Spiaggia dei Conigli (Beach of the Rabbits) of Lampedusa is one of the main attractions of the island, with colours reminiscent of the Caribbean seas. In order to reach it, it is necessary to make a long walk, and the entrance is contingent even in pre-covid times.

This is because the wonderful territory of which this beach is part is absolutely to be protected, in fact in it there are no special services or bars. Only the most pristine sea, the sun, and one of the most beautiful beaches in the world.

FIND OUT MORE ABOUT THE BEST ATTRACTIONS IN SICILY❯ 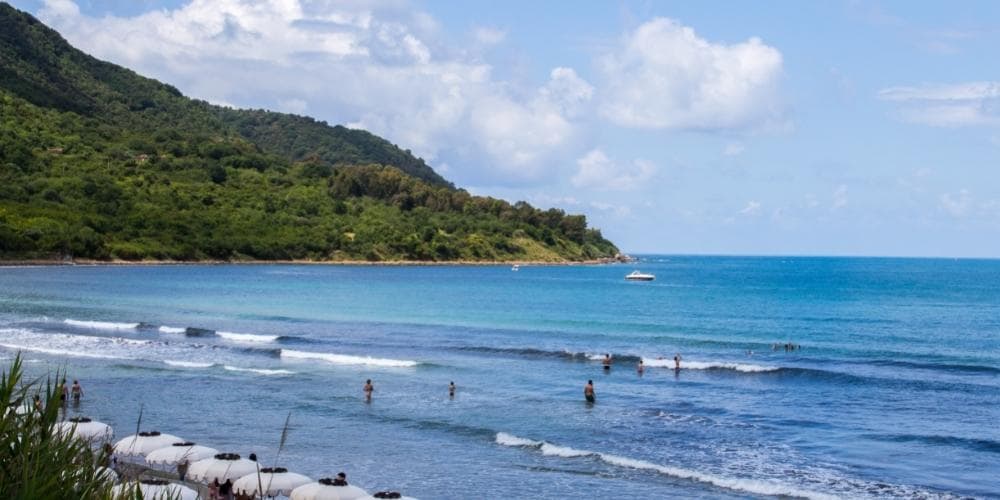 Another beach to discover is located near the coastal town of Agropoli: we are talking about Trentova Bay. Here, a few kilometers from the city (also very beautiful) coming out of the green of the uncontaminated nature rises this place that goes to merge with an extraordinary sea with its shades of blue; a sea always clean, fresh and where you can spend wonderful days strictly with your head under water.

FIND OUT MORE ABOUT THE ATTRACTIONS IN SALERNO'S AREA ❯

The Spiaggia di Rena Majore (Rena Majore Beach) is located in the north-western part of Sardinia, it differs from the first for the thickness and consistency of the sand, much coarser and grainy, almost mini pebbles, which return a unique environment of its kind. The sea, deeper than other bays as La Pelosa, is a paradise for snorkeling: in fact, there is so much flora and fauna in this small corner of paradise.
Rena Majore is located a few kilometres from Santa Teresa di Gallura. You can enrich your day by visiting the surroundings which are also very rich in events. For more information, just consult the Salude & Trigu programme.

The Baia dei Sareceni (Bay of Saracens Beach) It's one of the best known beaches of Liguria and Northern Italy. Characterized by a beautiful bay that overlooks a wonderful crystal clear sea, a unique place enclosed by a stretch of rock and characterized by the wild air. This is also among the ideal destinations for snorkeling, much practiced in these parts. 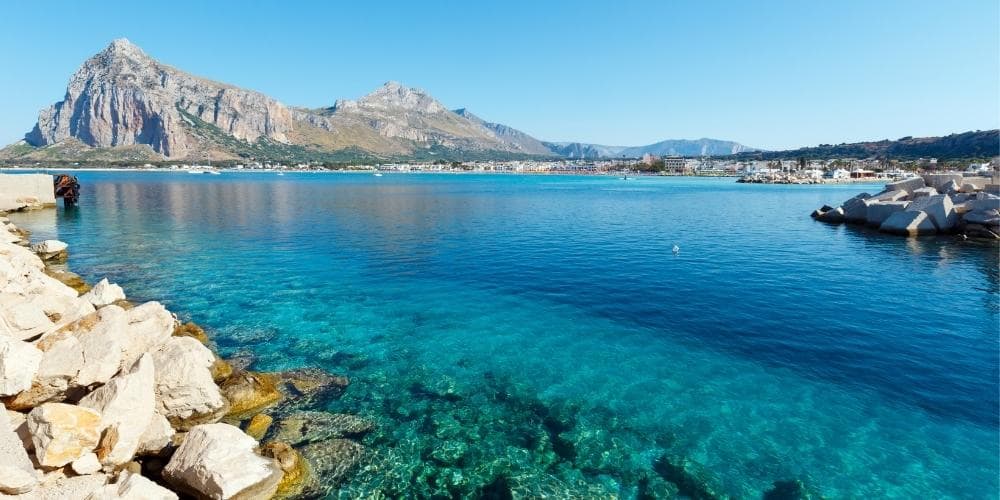 Transparent sea, golden sand, and colours that at sunset make the eyes shine to all those who witness this spectacle. We are talking about the beach of San Vito Lo Capo, a kiss, a moment of passion, between the white houses of the town and the fascinating promontory of Monte Monaco. A true paradise where nature and the Sicilian lifestyle offer unforgettable vacations. A natural reserve that combines with the art and architecture of a historic place and all to be discovered. 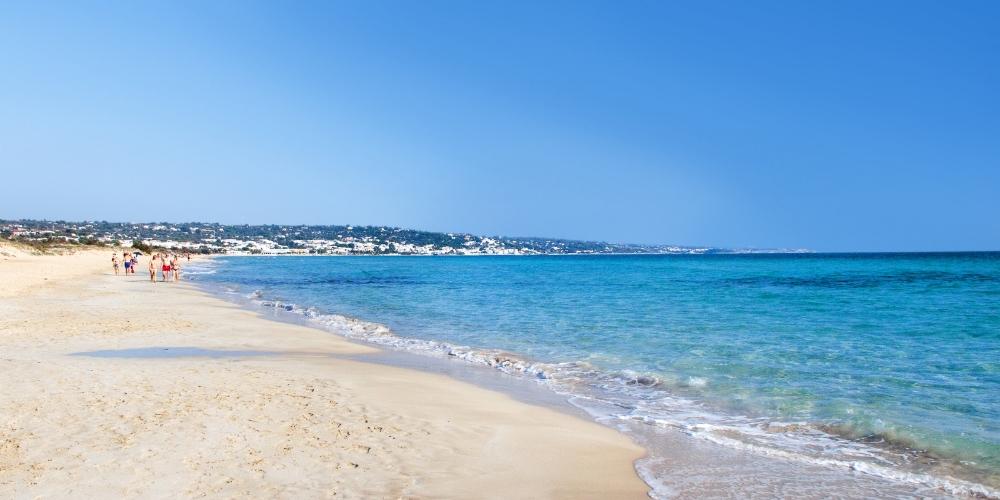 Fine sand, blue sea, and tropical colors, enough for the Spiaggia di Pescoluse (Pescoluse Beach) and other places nearby to be known as the "Maldives of Salento" or even "The Seychelles of Salento". The environment here is mainly sandy but several rocky points of the coast create a natural combination to know and discover. 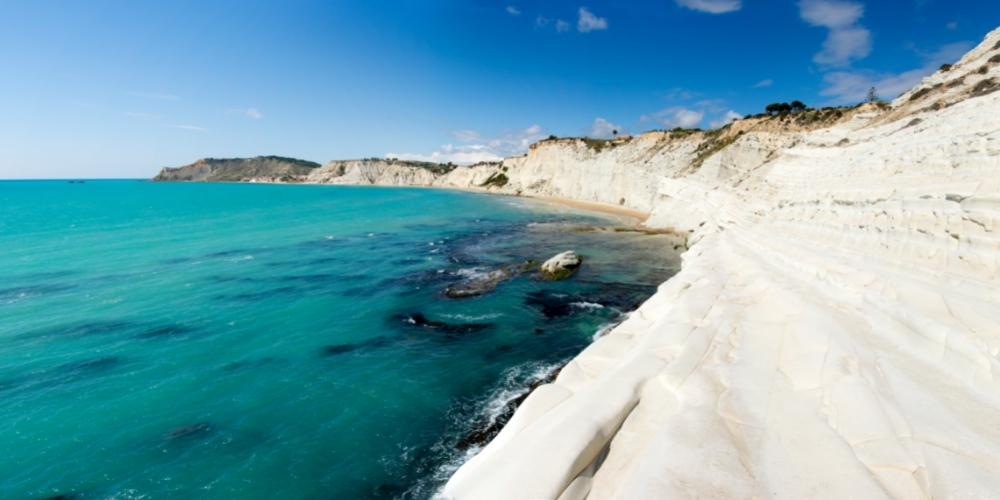 Scala dei Turchi (Stair of the Turks): a magical place, known for its massive white marble cliffs, a place of immense beauty. A spectacular geological site that owes this beauty to a very long natural process. The "staircase" in fact was formed with the succession of rains and winds that have carved over the years this natural white "staircase". It is now called "Dei Turchi" (of the Turks) because improperly the ancient local populations, called with that appellative the Saracens who used to land on these coasts, using the particular rock formation as a staircase to plunder the villages of the coast as the current Realmonte.

FIND OUT MORE ABOUT THE ATTRACTIONS IN SICILY!❯