Vico Equense, Pearl of the Sorrento Coast and Blue Flag 2021 for its crystal-clear sea

Vico Equense is one of the places to admire, discover and rediscover during a visit to Campania. The nature of the place is characterized by a predominantly mountainous territory, with spectacular landscapes overlooking the sea. The sea itself is one of the marvels to be contemplated here, with its intense blue colour, often streaked with reflections ranging from green to lighter azzure.

Vico Equense, one of the pearls of the Sorrento Coast

The Sorrento Coast is one of the places to admire, discover and rediscover during a visit to Campania. The nature of the place is characterized by a predominantly mountainous territory, with spectacular landscapes overlooking the sea. The sea itself is one of the marvels to be contemplated here, with its peculiar intense blue colour, often streaked with reflections ranging from green to lighter blue. Many towns overlook this special territory: from the famous Sorrento to Sant'Agata dei Due Golfi, from the small Massa Lubrense to Vico Equense.

This Place, which is worth getting to know, was also awarded the so-called "Blue Flag" in 2021; an international recognition that takes into account several quality parameters including On-site information and related environmental education, water quality, environmental management, services, and safety, all parameters fully respected on this coastal strip.

The splendid Vico Equense, is actually the largest municipality of the entire Sorrento Coast and extends from one side to the other of the peninsula and is a place rich in architectural, historical, museum, and environmental beauties, and here we are talking about its wonderful sea and its dream beaches.

The Sea of Vico Equense, internationally recognized with the Blue Flag 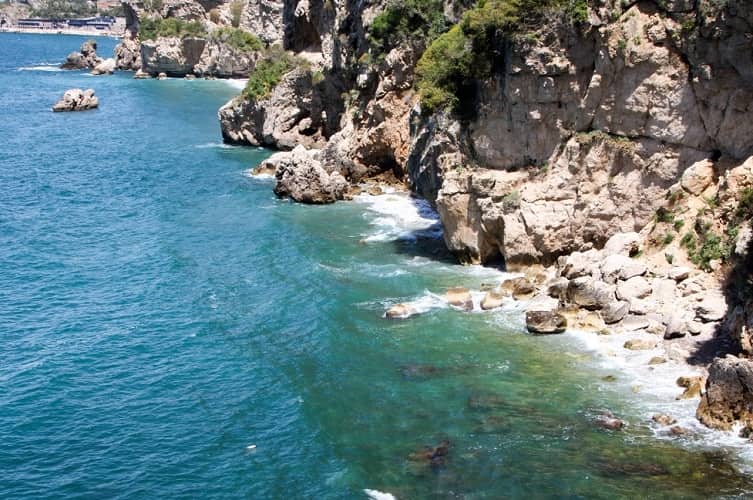 Due to its extension and not too much urbanization, the municipality is distinguished by the presence of numerous small "fractions" or "casali", each of which presents unique environments, from the mountain reliefs to the beaches, to the beautiful panoramic spots and trekking routes.

Famous in these parts is the beach of Scrajo, whose Latin name means steep. This name is not a coincidence and can be a clear example of what the landscapes of the entire Sorrento Coast are in general. This beach is located near a thermal spring and consequently, the water temperature can vary. It is located on the east coast of the peninsula, close to the most urbanized part of Vico Equense; it also has a station of the Circumvesuviana (rail line connecting it with Naples).

Not too far from Scrajo, there is a real paradise for those who practice (or want to practice) diving: Banco di Santa Croce. Here the seabed, at a point not too far from the coast, precisely in the coastal area between Torre Angellara and Punta d'Orlando, creates a unique environment: at that point the seabed rises almost to the surface of the water, creating a "shoal". Right there, there is truly unique biodiversity, which can only exist in those specific conditions, with completely original flora and fauna, which has become the subject of important scientific studies and publications.

A small "wild" beach not too far from these places is the so-called "Tartaruga", so-called because of the shape of rock positioned right in front of the small strip of land facing the sea. This place is located under a rocky wall and is accessible only by sea; in the early morning there is no sun and it is not a suitable place for children given the strong sea currents that agitate these places. However, we are talking about a paradise and if you love nature and a bit of adventure, this is the place for you.

On the diametrically opposite coast, similarly belonging to the municipality of Vico Equense, is the beach of Tordigliano, characterized by rocks and cliffs that fall almost vertically into the water. To reach this paradise it takes almost 20 minutes of descent, strictly on foot, so a minimum of patience and practicality is needed, but the beauty of the place repays even a little effort. Another wild beach, which must be "conquered" after a trek of medium difficulty, the pebble beach, and transparent water will leave you speechless. Vico Equense is truly a paradise waiting to be discovered.