A journey through the 10 most beautiful beaches in Italy in 2022, including hidden bays and stretches of golden sand. Don't miss them!

The Italian coastline, with its almost 8000 kilometres, has countless heavenly beaches. From North to South, the coasts and rivieras take on the most amazing shapes, from small inlets to wide, sandy beaches.

The Italian peninsula and its islands offer unique landscapes, rocky stretches with crystal-clear water and long stretches of golden sand where you can relax and watch sunsets over the sea. Italy is famous all over the world for its small and large seaside resorts, from the Ligurian Riviera to the Costa Smeralda. Today we are going to discover the 10 most beautiful beaches of 2022, although the list would be endless given the countless wonderful shores. 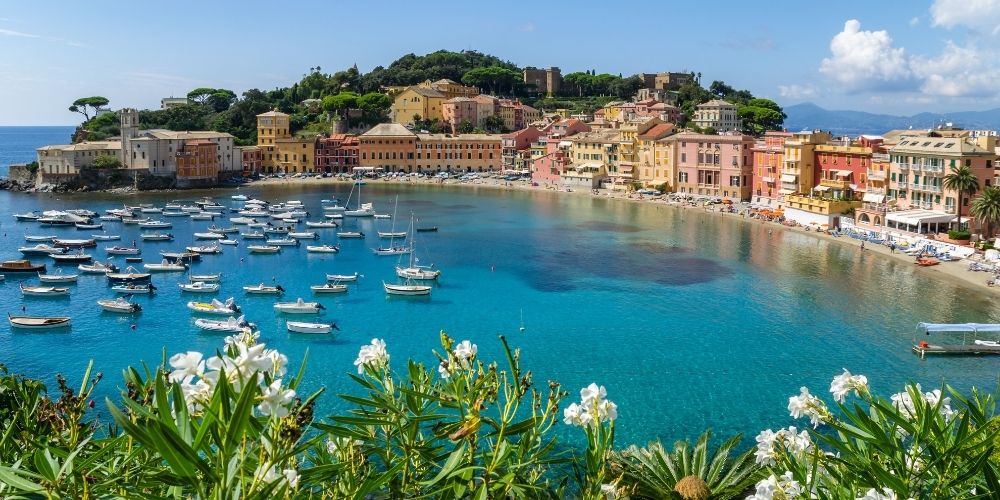 Baia del Silenzio from above

The coasts in Liguria are among the most beautiful in Italy: full of inlets, bays and rocks overlooking the crystal clear sea, they attract hundreds of thousands of tourists every year. One of the most beautiful areas in this region is the Baia del Silenzio (Bay of Silence), in Sestri Levante. This beach is nestled among typical Ligurian colourful houses and important historical buildings and is characterised by fine sand. A dreamlike setting. 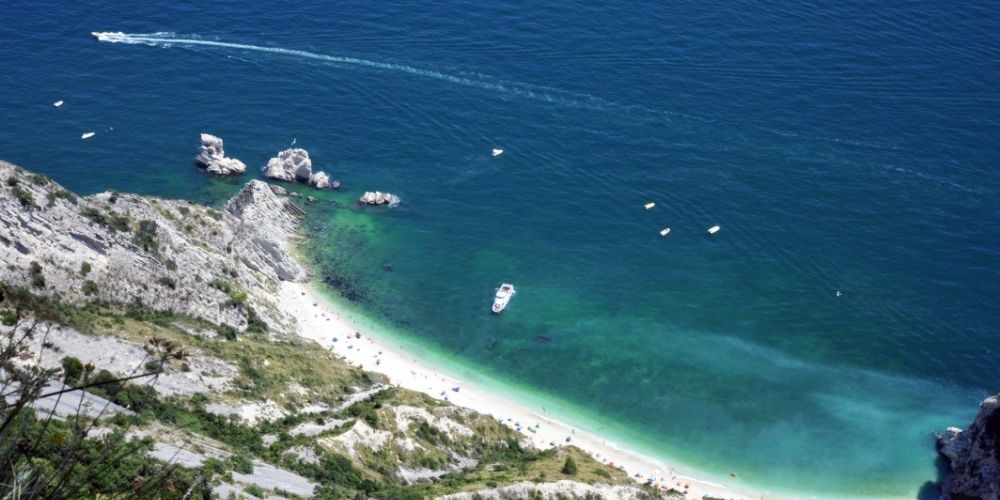 Spiaggia delle Due Sorelle from above

Along the Conero Riviera in the Marche region, there are two imposing white stacks, the Due Sorelle (Two Sisters), which give their name to the adjacent white sandy beach bathed by the crystal clear waters of the Adriatic Sea. A truly breathtaking landscape, where the white rock stands out against the blue of the sky and the sea. This small, wild beach, embraced by the Conero rocks, can only be reached by sea, as the rather inaccessible path down to the sea from the Passo del Lupo viewpoint was banned several years ago due to its danger. 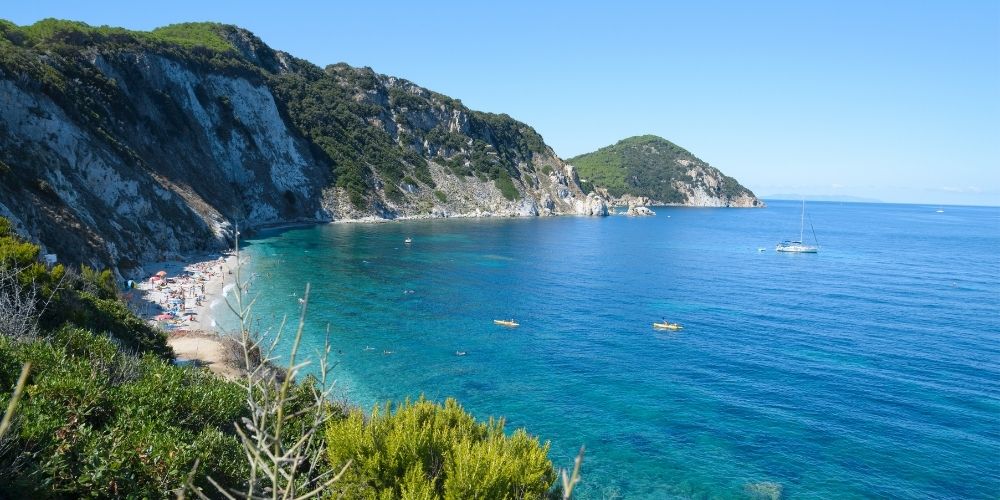 The Elba Island is renowned and much loved by travellers for its wild, unspoilt nature, crystal clear blue sea and beaches of every type and colour. One of the most beautiful beaches on the island is the Spiaggia di Sansone (Sansone Beach) in Portoferraio, a small strip of white pebbles that can be reached by a path starting from the Spiaggia della Sorgente, from which it is separated by a rock. 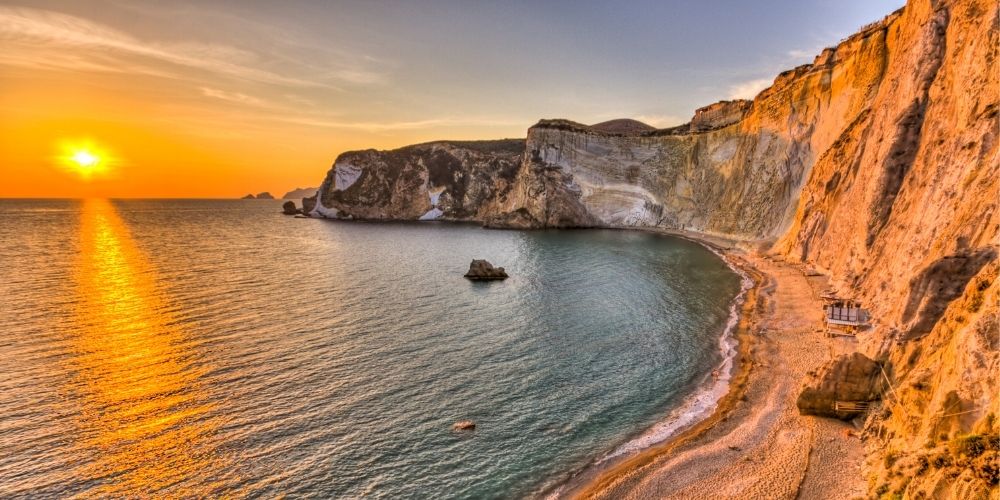 Chiaia di Luna (Moon Beach) is the most famous beach of the Pontine Islands, located on the island of Ponza, the largest island of the archipelago. The beach, a thin strip of sand, owes its name to its half moon shape. The bay is surrounded by high tuff cliffs that overlook the narrow strip of sand that forms the beach. Due to the instability of the rock, the access to the beach has been closed and it can only be seen by sea. A visit is recommended in the afternoon until sunset to enjoy one of the most beautiful natural spectacles. 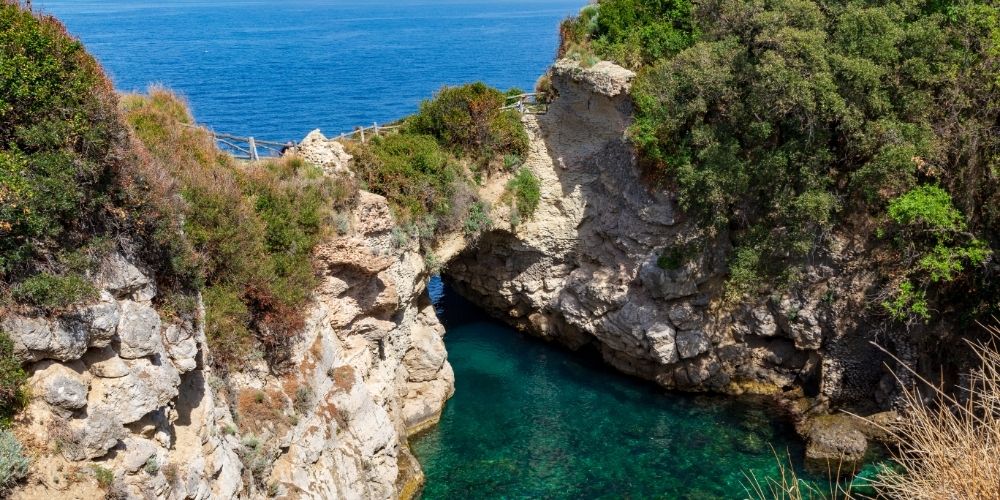 Bagni della Regina Giovanna are one of the most secluded and beautiful beaches on the Sorrento coast and they are located along the rocky cliffs of Capo di Sorrento, near a spectacular natural stone arch and the ruins of a Roman villa. It is a magnificent natural swimming pool just a few steps from the centre of Sorrento, a true natural oasis. The name of the Baths derives from Queen Giovanna II of Anjou-Durazzo who, according to legend, used to spend the summer in Sorrento and spend time with her lovers in these very waters. This part of the coast and its free beach can be easily reached on foot from the centre of Sorrento. The crystalline waters of Salento

Punta Prosciutto beach is the most beautiful and unspoilt area of Porto Cesareo, on the Ionic side of Salento, the southernmost part of Apulia. In this stretch of coastline, the beaches are white and unspoilt and the water is so crystal clear that it feels like you have been catapulted to the Caribbean. This magnificent beach of sand and dunes stretches out for about 2 kilometres and its shallow water makes it ideal for a safe time with your children. 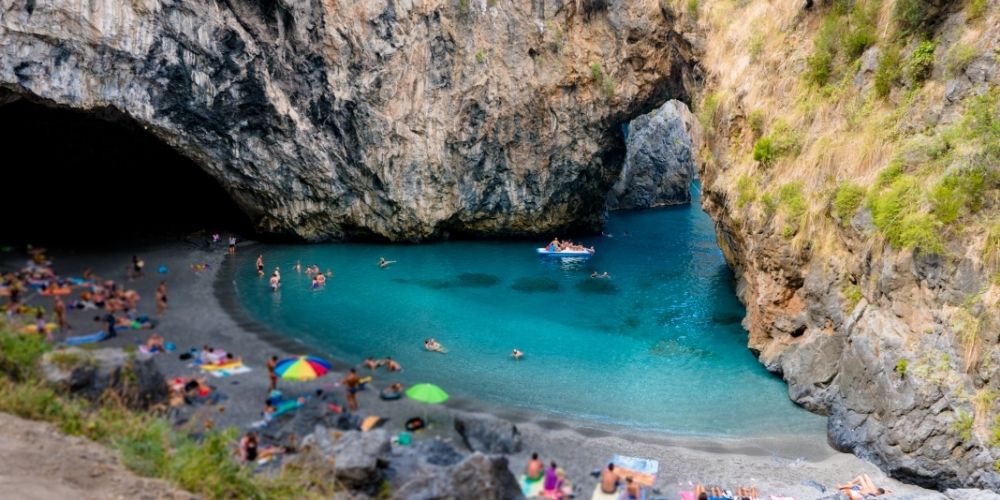 In Calabria, along the Riviera dei Cedri amidst unspoilt nature, lies the beautiful Arcomagno Beach. The beach is a small lagoon about 25 metres long, made up of small pebbles and gravel and washed by a crystal clear sea. Arcomagno Beach owes its name to the presence of a large rock arch that protects it from the sea and makes it unique. The best time to enjoy the beauty of this beach is at sunset when the sun shines through the rock arch, creating a magical atmosphere. 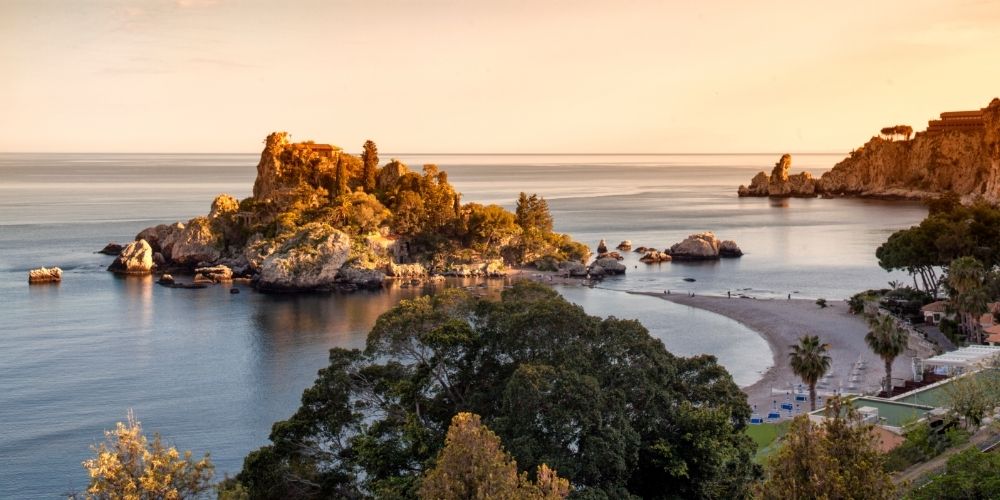 Beach of Isola Bella at sunset

Along the eastern coast of Sicily we find the distinctive Isola Bella beach: a wide bay consisting of two beaches, with a small enchanting island located right in the middle of the two sides of the bay. Isola Bella is certainly the most beautiful beach in Taormina, nestled at the foot of the city, stretching out in front of the small island of the same name, coloured by rich vegetation. The island is connected to the mainland by a thin strip of beach, which disappears and reappears according to the rhythm of the tides. Spiaggia dei Conigli from above

On the southern side of the Lampedusa Island, we find the paradisiacal Spiaggia dei Conigli. Considered one of the most beautiful beaches in Italy, the Spiaggia dei Conigli (Rabbit Beach) is characterised by soft, fine white sand and a very blue sea. The beach is reached by a stairway carved into the rock that descends from the road down to the sea. Access is restricted, to protect the extraordinary and vulnerable coastal environment, and divided into two distinct time slots, 8.30-13.30 and 14.30-19.30, with a maximum of 550 people per shift.

On the east coast of Sardinia, reached by trekking in the Supramonte of Baunei, is the Goloritzé cove, a small but extraordinary beach at the base of a deep gorge in the Gulf of Orosei. The beach is made up of endless white pebbles and the waters that bathe it have incredible shades of blue and turquoise. The scenery is made even more beautiful by the spire of Punta Goloritzé, an arch of rock jutting out into the sea. An entrance fee must be paid to access the cove.