10 Italian Guinness World Records that will leave you speechless

8 November is Guinness World Record Day that celebrates records in a wide variety of categories. There is no shortage of such awards for Italy and Italians.

The Guinness World Records is a book that has been published annually since 1955 and collects all world records.

The idea of collecting every possible kind of record came from Sir Hugh Beaver, the then managing director of the Guinness brewery in Dublin. On 4 May 1951, during dinner, he thought some golden plovers during their haunting trip had escaped because of their speed. A discussion arose among those present as to whether or not the golden plover was the fastest bird in Europe.

Sir Hugh thought that these discussions must be commonplace and had the idea of creating a book in which anyone could satisfy their curiosity about records. So he turned to Ross and Norris McWhirter twins, who specialised in athletics records, and entrusted them with the first edition of the Guinness Records Book.

The book was published on 27 August 1955 and was an immediate success. Even today, after the demise of the McWhirters, it is still the best-selling copyrighted book in the world and the third best-selling book after the Bible and the Koran. Having sold more than 100 million copies in 100 different countries, the book itself is a record!

Italy certainly does not fail to shine within this recognition, especially when breaking culinary records. We at Visit Italy have selected the ten that left us almost speechless!

10. The world's most giant pumpkin (Redda in Chianti, Tuscany)

It is one of the latest records achieved in Italy. In Radda in Chianti, in the province of Siena, farmer Stefano Cutrupi won the record for the giant pumpkin in the world with his 1,226-kilo pumpkin. Great joy was achieved after 14 years of treatment, thus surpassing the world record that had until recently been held by Belgian Mathias Willemijns with 1,190.50 kilos.

9. The most miniature theatre in the world (Vetriano of Pescaglia, Tuscany)

Still in Tuscany, in Vetriano of Pescaglia, in the Lucca area, there is the most miniature theatre in the world. It is only 71 square metres in size but has everything a public theatre should have: curtain, balcony and 75 seats. It was made out of a 19th-century barn, restored in 1997 and included in the FAI (Fondo per l'Ambiente Italiano - Italian Environment Fund).

Pizza is one of Italy's best-loved foods, a feather in our cap that for years has also allowed us to put ourselves to the test in the Guinness Book of Records.

The record made by the pizza makers of Naples was in 2016. During the Pizza Village event, they filled the promenade along Lungomare Caracciolo with no less than 1,853.88 metres of dough, achieving the record for the longest pizza in the world. Unfortunately, this record was broken by the American town of Fontana, near Los Angeles, which beat Naples with a pizza of 1,930 metres.

However, the Neapolitan pizza makers didn't give up. The following year they won the record for the longest fried pizza in the world: 7.15 metres with 80 kg of dough topped with ricotta, fiordilatte cheese, crackling, tomato and pepper.

The last record in the world of pizza was this year (2021) in Rivarolo Canavese (Turin). They made 38 metres of pizza in pala (the typical Roman pizza, different from the Neapolitan one), winning the prize for the longest pizza in pala in the world.

Panettone is a typical Christmas cake, born in Milan and eaten throughout Italy. There are many variations, but traditionally it consists of a soft sweet bread baked in the oven and often topped with sultanas and candied fruit.

Italy celebrates Father's Day on 19 March. The symbol of this holiday is the San Giuseppe's Zeppola. This typical Neapolitan cake is made with flour, sugar, eggs, butter and olive oil, enriched with custard, icing sugar and black cherry.

In 2019, on the occasion of the holiday, in the historic Caffè Gambrinus, chef Stefano Avellano will prepare the world's largest zeppola. The super zeppola weighs 84 kilos, has a diameter of about one metre, and has 25 kilos of cream and sour cherries. A real bomb of deliciousness!

5. The longest tiramisù in the world (Milan, Lombardy) 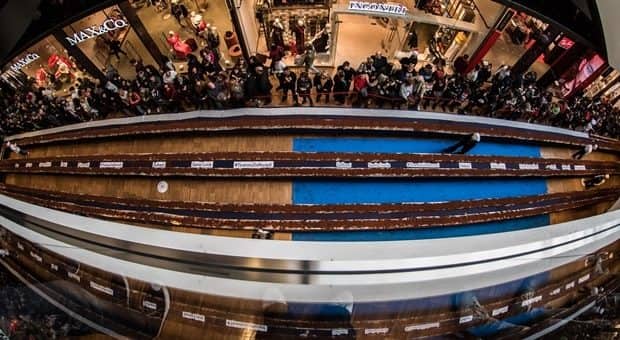 In 2019, Milan set a new record by making the longest tiramisu in the world. Tiramisu is one of the most popular desserts in Italy. Its ingredients are Savoiardi biscuits, coffee, mascarpone cream, eggs and cocoa.

This record-breaking dessert measured 273.5 metres. It was prepared by 30 pastry chefs, using 50,000 ladyfingers, 500 kg of mascarpone cheese, 300 litres of coffee, 65 kg of sugar, 60 kg of egg yolk, 70 kg of egg whites and 65 kg of bitter cocoa. With these quantities and ingredients, the city of Milan managed to beat the previous record of 266.9 metres achieved the year before in Friuli Venezia Giulia.

Fifteen thousand portions came out and then donated to canteens in Lombardy, Tuscany and Emilia Romagna. In short, a gluttonous event but also one of solidarity! 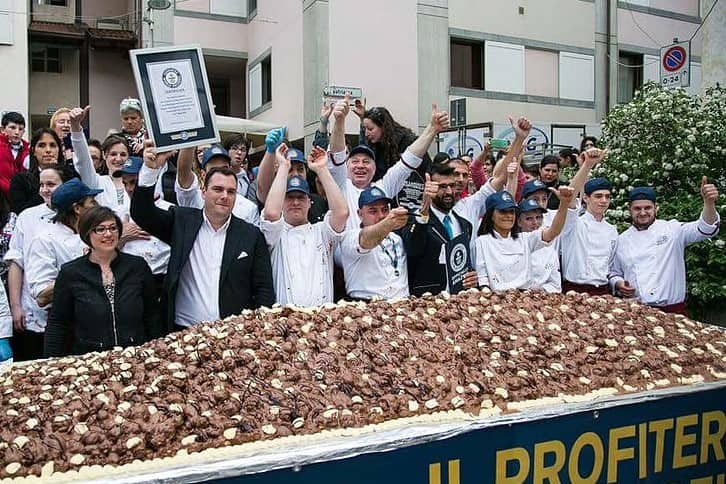 Profiterole is a dessert that originated in France. Also, the Italians love it—made with several cream puffs mixed with custard, chantilly cream, cream or ice cream, and chocolate cream.

Although the origin of the dessert is French, the record, however, is made in Italy. In fact, on 15 September 2019, the largest profiterole in the world will be made in Latina: 430 kg of spoon cake, made with 9,000 cream puffs, 200 kg of Chantilly cream and 200 kg of chocolate icing. It beats the previous Swiss record in Airola (253 kg).

The record is of the Neapolitan barista Francesco Costanzo, who prepared 703 coffees with lever machines in one hour.

The event took place on 23 September 2019 in Piazza Municipio in Naples. 703 coffees were validated, regularly served in 25 ml cups with a saucer and teaspoon. To these must then be added 23 other coffees that the supervising judge discarded.

In August 2020, in Forlimpopoli, in the province of Forlì - Cesena, in Emilia Romagna. During the Artusiana Festival, which celebrates 200 years since the birth of the gastronome and scholar Pellegrino Artusi, the people made the longest puff pastry rolled out with a rolling pin in the world. 177.72 metres, breaking the previous record of 125 metres set the year before at Fico Eataly World, the food theme park in Bologna.

More than 100 "sfogline" and "sfoglini" (the people responsible for "rolling out the dough" by hand): from the 96-year-old lady to the 16-year-old girl.

1. The world's most extended work of art (Massa, Tuscany) 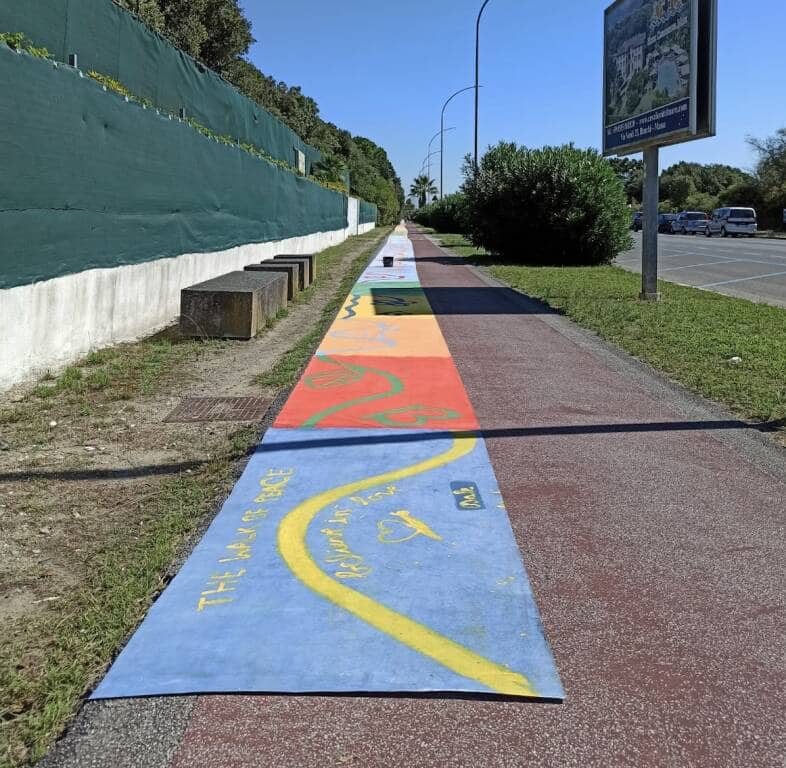 In May 2021, an Italian will have created the most extended work of art in the world. The artist is Luca Fruzzetti, aka Dale. The latter made the most prolonged work of art in the world created by a single individual. It is called "The Walk of Peace" and was completed in Massa during the pandemic for a certified length of 5,310 metres, surpassing the previous US record of 3,300 metres.

The work was created to achieve a record and leave an important message of hope for art, culture, and more! It took months of work and over sixty volunteers to complete. The work covered the entire seafront from Fonte Dei Marmi to Massa: a rainbow in which graceful butterflies fly. The result intends to convey positivity, lightness, and many other symbols: empathy, diversity, environmental sustainability, and inclusion.

During these months, the work has toured Italy, adorning some of the most significant Italian cities: the Coliseum in Rome, the Dante Museum in Florence, the Palazzo Delle Esposizioni in L'Aquila, the Rocca di Fontanello in Parma and many others. And finally, it crossed national borders with the exhibition at the EXPO in Dubai.

And you, what do you think: did you know these records? Which is your favourite?