Siena has been a UNESCO World Heritage Site since 1995 when it was recognized for its extraordinary ability to preserve and its historical authenticity, which allows those who visit it to almost take a journey through time and Italian history. 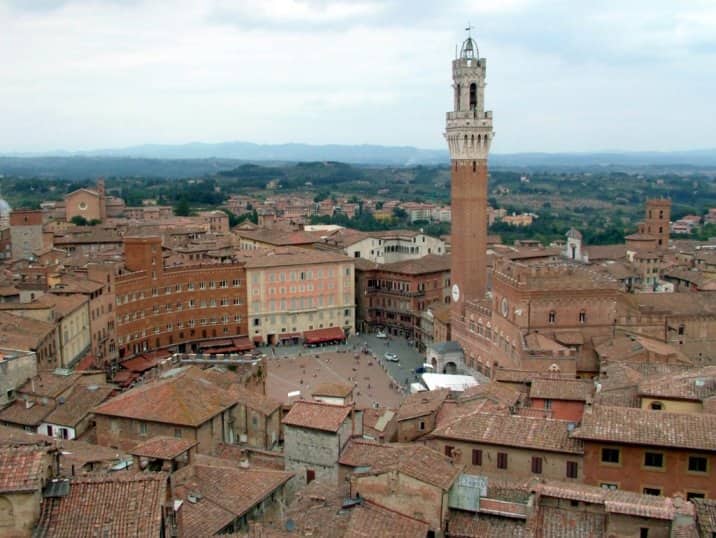 It is a city that has fixed its medieval soul in time infinitely and indelibly, preserving architecture, culture, and traditions through the centuries. Siena has been a UNESCO World Heritage Site since 1995, and the reason for this choice is its extraordinary ability to preserve and its historical authenticity, which allows those who visit it to almost take a journey through time and Italian history.

The center of the city and of its culture: Piazza del Campo

It is advisable to start from the monumental "Piazza del Campo", the true hub of city life. It is easy to recognize because of its iconic shell shape, slightly downhill: it is where the famous Palio of Siena is held.

Here a short parenthesis on the "Palio" di Siena can help us understand what it means to "preserve" a tradition over time. It is a horse race held twice a year, on 2nd of July and 16th of August. Both dates are chosen because of religious customs and celebrations of Christian worship. Of course, other extraordinary dates can be added, linked to events of a different nature.

The Palio was born in the Middle Ages and competed against all the "contrade" of the city of Siena: Aquila, Bruco, Chiocciola, Civetta, Drago, Giraffa, Istrice, Leocorno, Lupa, Nicchio, Oca, Onda, Pantera, Selva, Tartuca, Torre and Valdimontone.

This is one of the many things that make Siena, Siena. Its historical link with the Middle Ages does not at all indicate a lack of modernity but rather a healthy attachment to the positive values of centuries and centuries of history.

Facilitating this 'time travel' is also the fact that the current population of around 50,000 inhabitants is not too far removed from that of the great cities of the 11th and 12th centuries.

From here, we can understand a life that flows at a different speed, more on a human scale than Italian and European metropolises.

This is the value of time that has been perfectly preserved in the city. Its inhabitants have another extraordinary (and historical) strength: the beauty of Art.

Being a 13th-century city, Romanesque and Gothic art and culture are very abundant and prevalent in the city. In this style, one of the most beautiful sights not to be missed in Siena; we are of course talking about the city's Duomo, in which both excellent craftsmen and artists of the caliber of Michelangelo, Donatello, Giovanni, and Nicola Pisano worked.

With the unmistakable architectural style that sees it rise forcefully to the top, it nonetheless has one of the most beautiful floors in the entire history of Italian art on which several Sienese artists worked except for Pinturicchio (who came from Perugia). What is surprising are the techniques used in the creation of this floor: the 'graffito' and the 'commesso marmoreo'. The first of these involved hatching over slabs of white marble; thus grooves were created with a drill and chisel which were then filled with black stucco. The commesso marmoreo, on the other hand, is the next technique in which colored marble was added in a similar way to the wooden inlay. Whoever arrives at the Cathedral of Siena thinks of looking upwards when in fact the most precious treasure is right under his feet.

A small parenthesis must be opened on Sienese Art, a "school" that between the 13th and 15th centuries gave birth to illustrious figures such as Duccio di Buoninsegna, Simone Martini, Ambrogio Lorenzetti, Stefano di Giovanni (known as Sassetta), and many others.

The latter were true representatives of the city, which thus became a famous artistic center in Europe before the hegemony of nearby Florence (especially since the Renaissance).

This is another reason why Siena's historical center is studded with architectural and historical-artistic beauties of great value: think of the Torre del Mangia (so-called because of its first custodian, Giovanni di Duccio, known as Mangiaguadagni), the Palazzo Pubblico (which today houses a beautiful Civic Museum), the Baptistery (where Donatello, Jacopo Della Quercia, Lorenzo Ghiberti, and others worked) or the Palazzo Buonsignori (which houses the National Picture Gallery of Siena, an authentic jewel).

A final digression should be made about museums because this small city can now show precisely what it means to 'preserve and protect through muse making. The many extraordinary works that over the centuries were kept in public buildings, churches, and other places risked being lost forever or even just taken out of their context. Thanks to the creation of museums, some of them of state importance, it is now possible to protect, preserve, exhibit, and teach all those who will come about the beauty of a unique place, capable of leaving its visitors speechless.