The love affair between coffee and the Italians has been going on for more than six centuries. The 1 October is the right day to tell it!

Coffee is Italy's iconic drink and, without it, it is difficult to start the day. Having a coffee at the bar is more than just a pleasant habit. It is a ritual, a tradition of the whole country from north to south, and few can do without it. There are many ways to ask for a coffee...Let's see them!

Every year on 1 October, the world comes together to celebrate coffee and recognise the millions of people across the globe - from farmers, to roasters, baristas, coffee shop owners and more - who work hard to create and serve the beverage we all love.

This year we're on a collective mission to help coffee farmers around the world receive a fair, living income.

The spread of the Ottoman Empire also allowed coffee to spread rapidly to many countries around the world. In Italy, coffee first arrived in 1570, when Prospero Alpino from Padua brought some packages to Venice from the East . Initially, it was sold in pharmacies but it wasn't considered as a drink until the 18th century. The first shop selling coffee was opened in Venice in 1683 and a few years later, in 1763, shops became 218 . Coffee was changing from being a mysterious object to a drink appreciated by the people, love was about to blossom. Between 1800 and 1900, shops selling coffee became places of cultural exchange, salons to talk about literature and politics. Only with the creation of the 'Italian bar' coffee became a daily appointment from North to South of the country, symbol of pleasure and conviviality.

In 1884, the first patent for the coffee machine was registered. The inventor of the machine was Angelo Moriondo, who presented his work during the Universal Exhibition in Turin. Coffee machine became a commercial product and began to be mass-produced only in the early 1900s. In 1933, Alfonso Bialetti invented the moka coffee maker, the traditional machine popular in every Italian kitchen. Over the years, more than 105 million different models have been registered.

Let's see how the Italians make their coffee 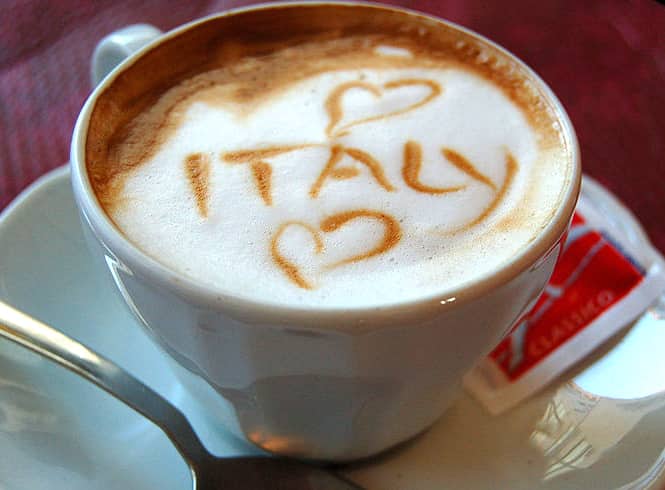 Caffè/Caffé Normale/Espresso: it almost sounds like a password, there's nothing else to add. A normal coffee is served in a cup and bitter.

Caffè macchiato caldo: a normal coffee spotted with a drop or two of hot milk on top.

Caffè macchiato freddo: a coffee with a spotted with a drop or two of cold milk on top.

Caffè schiumato: a cup of coffee with steamed milk.

Caffé Marocchino (or Espressino): a bit of cocoa powder, a small layer of foamed milk, and then some more cocoa. In some cases, some layers of Nutella cream chocolate are spread around the sides of the glass...

Caffè corretto: a coffee served with a few drops of either grappa, Sambuca, or rum.

Caffè d'orzo in tazza piccola: caffeine-free and made from barley, served in a small cup.

Caffè d'orzo in tazza grande: caffeine-free and made from barley, served in a bigger cup.

Caffè lungo: it is something between a normal coffee and a small American coffee

Caffè ristretto: it has a strong, concentrated taste

All the mentioned "caffè" can be served also in glass.

Caffè Shakerato: Coffee shaken up with ice in a cocktail mixer and, depending on preference, with added sugar.

Remind that the coffee you order at the bar in Italy is always espresso. If you prefer an American coffee, in a large cup, it should always be specified.