The 5 tastiest street foods in Rome

In Rome, as in most Italian cities, there are famous street foods. Visiting the beauties of the Eternal City enraptures tourists from all over the world who reserve little time for lunch between stops.

Rome 'eternal culinary city'! Roman street food has ancient roots. At the time of the Roman Empire, people were already eating in the street markets that offered bread, pancakes, sausages and vegetables and sauces such as Garum and Defrutum. Garum was a fermented fish sauce and Defrutum was a sauce that was a condiment of grape must. These two sauces are also found in the collection of books "De re conquinaria" written by Marcus Gavadius Apicius who was a Roman gastronome and writer.

The story goes that the word supplì comes from the French word SURPRISE (surprise). It is said that a French soldier was walking through the streets of Rome and when he ate a fried rice ball in the shape of an egg and found a piece of mozzarella inside, he was surprised because for him it was a surprise! So then over time the word SURPRISE was Italianised into SUPPLÍ. On the phone because when you break the supplì in two, the mozzarella is as stringy as a long telephone wire.To prepare the supplì, the rice is cooked in vegetable broth, then passed in a nice meat sauce and allowed to cool. Then you take a spoonful of rice and put a piece of mozzarella in the middle, close it with a little bit of rice and shape it like an egg and let it rest for half an hour, then fry it in sunflower oil. Supplí are sold in all the rotisseries in Rome.
Supplì should not be confused with arancini or arancine, which are typically Sicilian and have a different shape and filling.

The name of the sandwich is "Ciriola"! Ciriola with porchetta! In order to eat a good sandwich with porchetta, you have to go to the "porchettari", the street vendors that are especially found in the streets of the Castelli Romani, for example the Via dei Laghi, which is the road that leads to Castel Gandolfo, Rocca di Papa, Nemi and Ariccia. In fact, the most famous porchetta is the one from Ariccia. The porchetta is a small-boned piglet, stuffed with spices, then rolled up and cooked whole. It is sliced warm or cold.

Roman-style fried cod is usually prepared on Christmas Eve: if you go into the narrow streets of Trastevere, there are kiosks that sell it every day as street food and moreover, it is also served in trattorias as an appetiser.
There are two types of cod, which come from Norway and are salted and cured.
The salt cod arrived in Italy via the northern markets. In all Italian regions cod is eaten, but each region has its own traditional recipe.
Before using cod, it has to be rehydrated and desalinated. Soak the cod in water and leave it for at least 2 days, changing the water every couple of hours.

In Lazio, and especially in Rome, it is fried in a batter made of sifted flour, sparkling water and a pinch of yeast, then left to rest for half an hour. The cod is then dipped in the batter and fried in sunflower oil.

Every tourist who has been to Rome has surely eaten a piece of pizza in a pan because it is one of Rome's delicious street foods. In the historic centre, at every corner you can smell the fragrance of these freshly baked pizzas. They come in many different flavours.

Pizza in the Roman style pan has very specific characteristics. It is a high-hydration dough. The flour must be pizza flour 0 or 00, it must contain between 75% and 100% water of the weight of the flour, very little yeast and a little salt. The ready dough is first left for an hour at room temperature and then placed in the refrigerator; it is left to rise for at least 40 hours and then rolled out into a classic 60x40 baking tin. The thickness of the pizza must be between 15 and 30 mm across the entire surface.

After baking, the pizza in a Roman baking tin must have a very light and crumbly crust underneath, so that it can be enjoyed in all its variations. 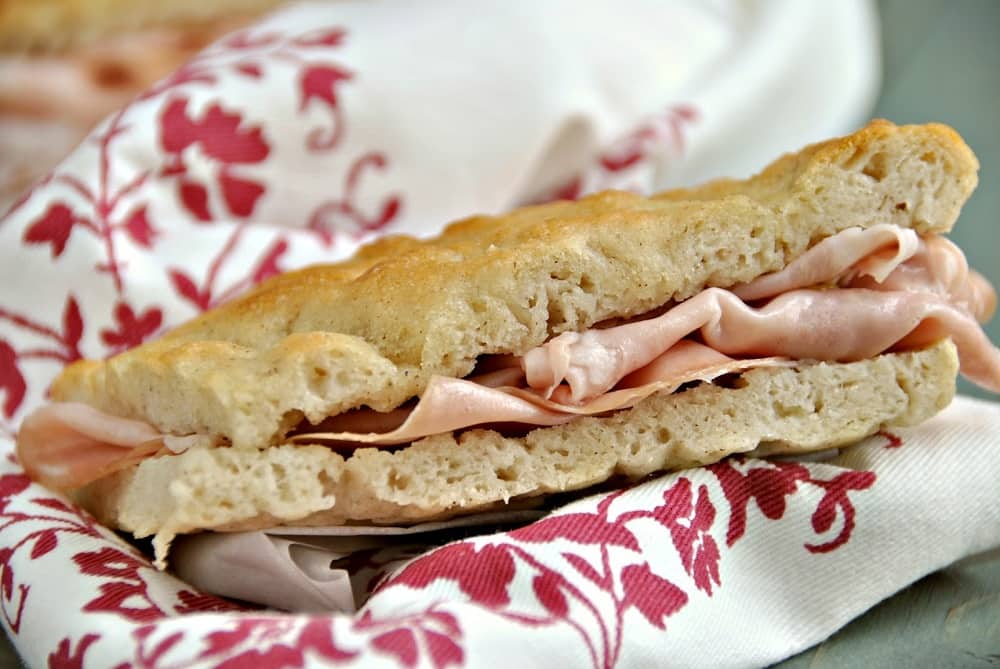 Another excellent Roman street food is the pizza bianca con la mortazza (mortazza is mortadella). White pizza with mortadella is a good snack or a tasty lunch to eat while sitting in front of a beautiful monument in Rome and enjoying all its charm.

Here is the procedure for the white pizza.
After mixing the ingredients, the dough is left to rise for half an hour, then rolled out on a work surface and folded several times. It is then left to rise overnight in the fridge. Then the baking tray is greased with oil and the dough is spread over the entire surface of the tray. Then a mixture of oil and water is applied to the surface. Press down with your fingers, then leave the white pizza to rise for at least 20-30 minutes and bake it at 220 degrees for 30 minutes. When cooked, leave to cool, cut into large rectangles and stuff with a couple of slices of mortadella.