The 15 most beautiful train stations in Italy

People always travel to look for beauty. By train, you can see the beauty from the outset, and some statins are very iconic and suggestive spots of the cities. Here, the Visit Italy Top 15 of the most beautiful and essential stations in Italy.

Trains are wonderful...To travel by train is to see nature and human beings, towns and churches and rivers, in fact, to see life. 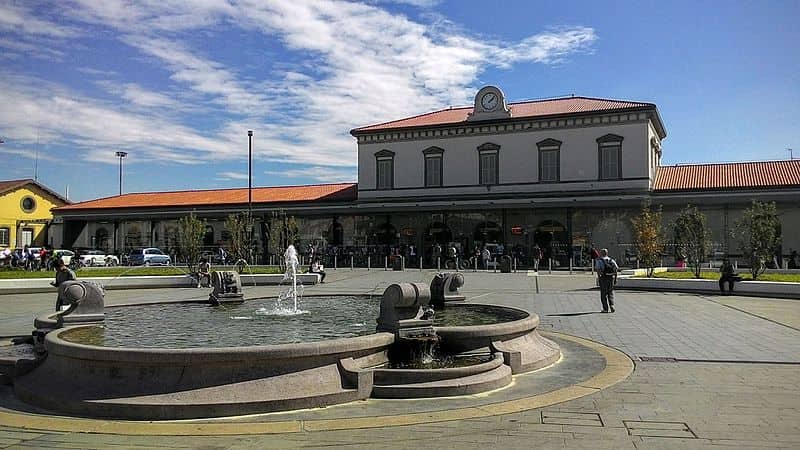 Bergamo Station stands out for the services that it offers and for the incredible punctuality of its trains. It is located in the city centre, covers the Lecco - Brescia line, and is the final train line stop for Milan and Seregno.

Built in 1857, the station was part of King Ferdinand's railway project, which linked Milan to Venice. Nowadays, it is the central pole of connection between Milan and Bergamo's hinterland.

A fountain on the station's square opened on the 15th of June 1912 with a water show that amazed everyone. The rush was an innovation for Bergamo because, before then, they had never seen so much water. Indeed, they build the fountain to celebrate a vital happening: finishing the new Algua's aqueduct, a project to free the city from the insufficient water supply.

The gateway to Venice, Venezia Santa Lucia train station, is, with 16 rails, the eighth biggest station in Italy. It stands out for its trains punctuality: 93% of them leave in time. A record, not just!

Venezia Santa Lucia is a typical terminus station, located in the city centre and daily averages 82thousand people, totally about 30thousands of people per year.

Venezia Santa Lucia station's building project lived ups and downs before reaching the version of a definitive solution. It was concluded after the Second World War by the architect Paolo Perilli. 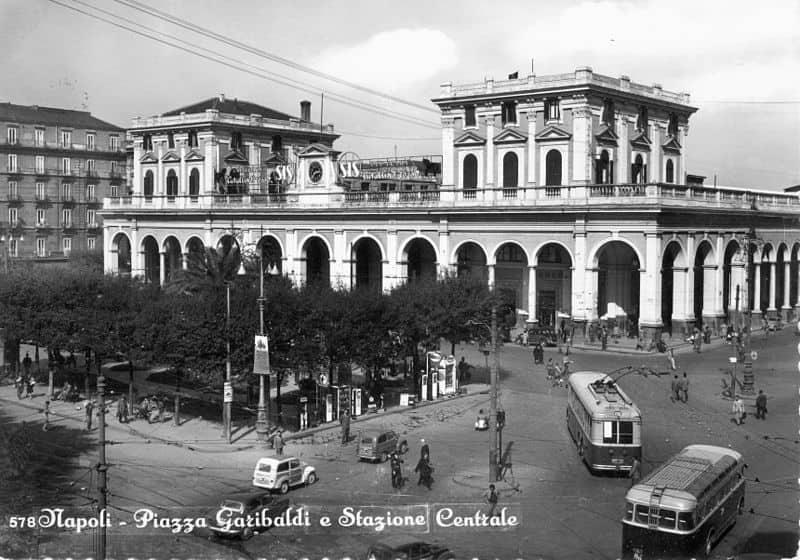 The Napoli Centrale - Garibaldi Station is famous, not for its beauty, but its history. It was the first Italian station, from where the first train of Naples - Portici railway line left. It was designed by the engineer Armando Giuseppe Bayard and financed by the artist Edgar Degas family.

The railway line opened on the 3rd of October 1839: the train had a steam locomotive called Vesuvio and eight wagons. The first road lasted nine minutes and a half.

Nowadays, Napoli Centrale station is the third of the best train stations in Italy for the chart 2021. According to their number of passengers who transit, the services offered and comfort guaranteed on the place. Among the services provided in Napoli Centrale, there is free Wi-Fi, a great link with public transport and parking (absolutely not trivial). 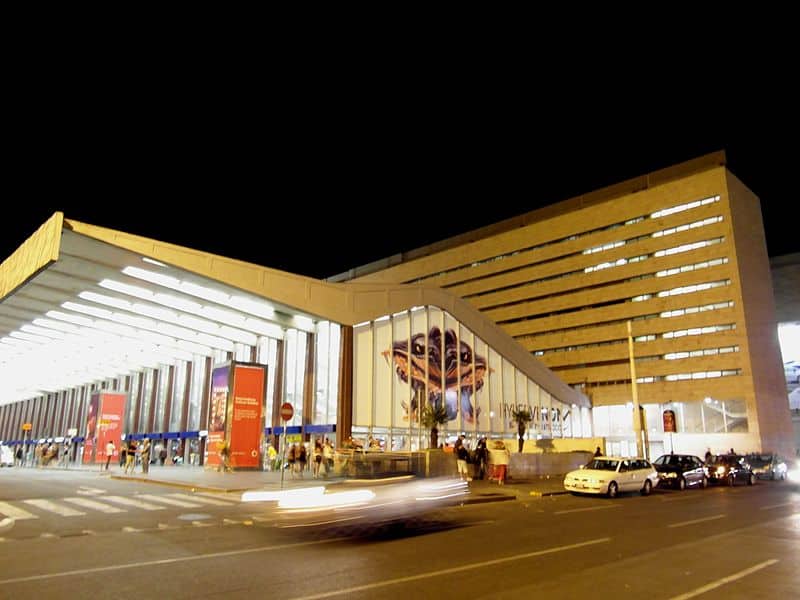 Roma Termini is the most significant Italian train station. It is the "main entrance" to Rome.

Architecturally it doesn't offer much, just a curved reinforced concrete canopy, popular known as the dinosaur (because of its shape). The commercial services and restaurants in the gallery are an excellent reason to shop here.

The top reason is the proximity to some of the must-see attractions in Rome. If you cross the street, you reach the Terme di Diocleziano and National Museum. Giojosa Marea is a small station in Gioiosa Marea, a small village in Sicily. It covers the regional routes Palermo - Messina railway line.

It doesn't stand out for its architectural aspect, but for the beautiful landscape that it offers. It is a railway close to the sea. From this small station, you can quickly get off the train and reach one of the most beautiful beaches in Sicily in a few seconds. 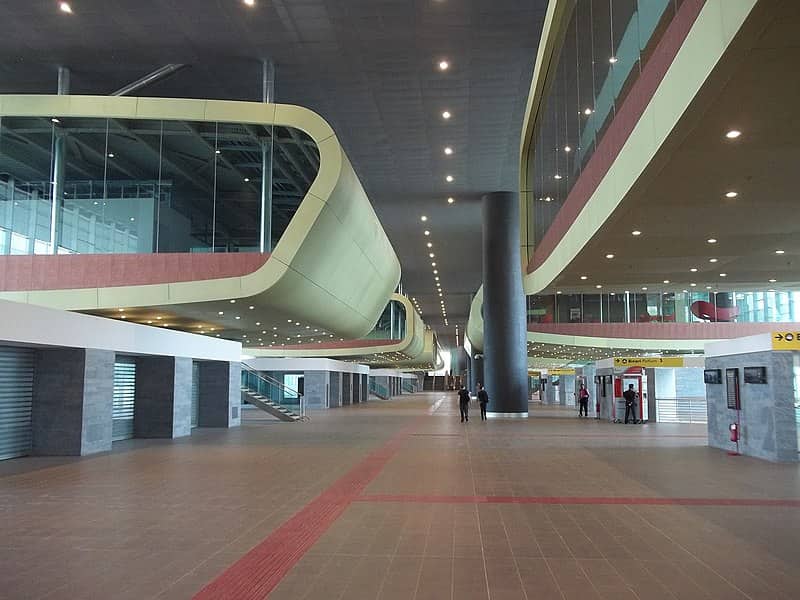 Roma Tiburtina is a station that divides the audience for its architectural style: there is who loves it and who eats it. One thing is sure: Roma Tiburtina represents a rare symbol of contemporary architecture in Rome with the Nuvola by Fuksas and Ara Pacis.

The opening of the station was in 2011. It was dedicated to Count Cavour, and considering its modern style, it is rather weird. The works lasted for four years.

In addition to serving the railway, it also serves as a linking bridge (completely in glass) between the neighbourhoods of Nomentano and Pietralta, historically isolated each other just because of the railway line.

Bologna Centrale station is the fifth Italian station, which links North Italy with the Central.

It doesn't stand out for its architecture, but its symbolic aspect is crucial: its watch stopped to the 10:25 of the 2nd of August 1980. That day, during that exact moment, a bomb exploded and killed travellers, passersby, and people in Piazza Medaglie d'Oro (the station's square) ready to leave or say goodbye to their dear ones.

The watch is a memorial to mourning, memory and solidarity for all those extracted by the rubble. Nowadays, on the entry of the station waiting room, there is a giant marble tombstone to remember the victims of that day.

Initially, the name of this train station was Chiaia. It opened on the 20th of September 1925 with the activation of the road of the so-called "metro" Pozzuoli Solfatara - Naples. In 1927, it took the current name of "Napoli Mergellina".

The passenger building of this station is one of the most beautiful buildings in Naples. The outer part is decorated with stucco, pillars and columns; the ground floor with rusticated ashlar.

The station has three entries: two sides with arches richly decorated and a central one with a watch held by angels and a cast-iron cantilevered roof. The station welcomes the travellers with two saloons, arrivals and departures, covered by barrel-vaulted with typical Liberty decorations and glass block.

With Roma Tiburtina, Reggio Emilia AV Mediopadana is the most ambitiuos 2000s architectural railway in Italy. It opened in 2013, and it is the Reggio Emilia's high-speed station.

The station is a project of the famous Spanish architect Santiago Calatrava. Firstly, the project was called Le Vele (the sails), for the shape it had to take. Then, he replaced it with a futuristic wave structure.

Moreover, the complex's train station includes bridges on the A1 motorway and a new motorway exit. It is a futuristic project in the middle of Pianura Padana, which has made Reggio Emilia a critical stopping place during the trip between Bologna and Milan. 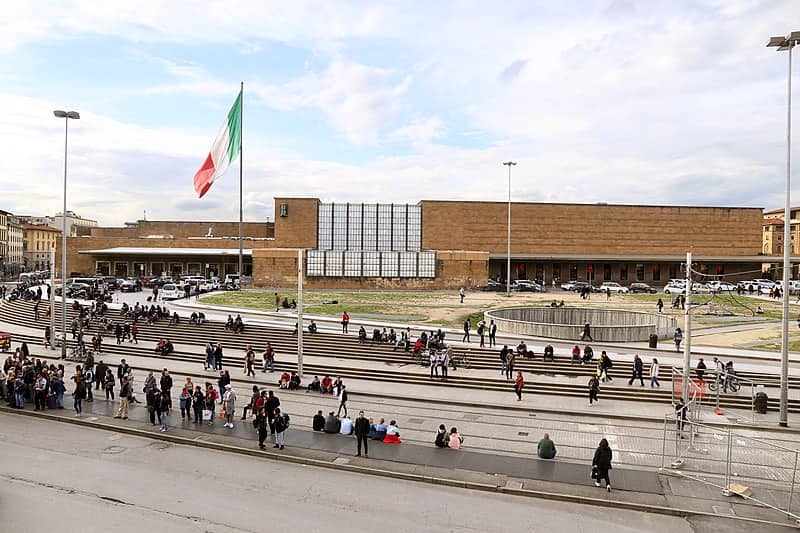 The building of Firenze Santa Maria Novella station divides the public opinion: who eats it and, instead, who considers it a masterpiece of Italian Rationalist style. It was built during the Fascist era, in the 30s, following a public call. Although the beliefs of Rationalist architects weren't the same as the monumental fascist, the same Mussolini expressed great appreciation for the obtained result.

Since Mussolini's time, trains have been on time, and everything was in order! To get the trains to arrive on time, you didn't need to make him head of government. It was enough to make him stationmaster. 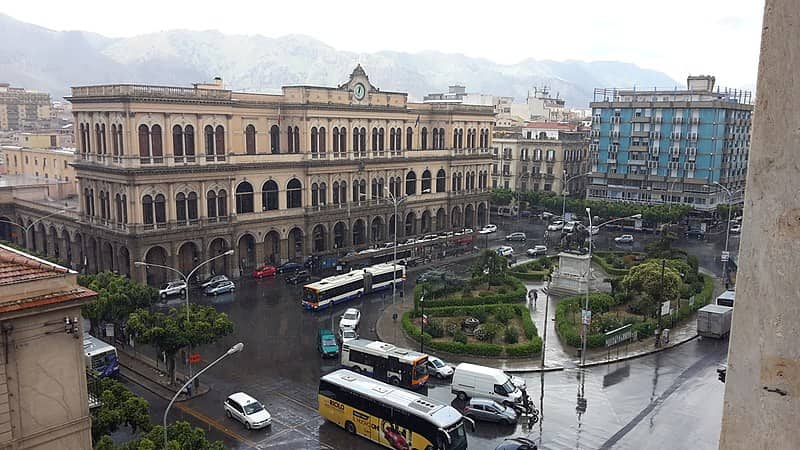 Palermo Centrale Station was built in 1885, and it is one of the oldest still working Italian railway stations. It serves all of Sicily by train, and it is very close to the city centre, sea and Palazzo Dei Normanni.

Its monumental facade is precious proof of the Eclectic style typical of the late 19th-century Palermo. The outside preserves almost the original aspect, except for the elegant glass and iron roof, which was demolished to extract the metals needed for World War II.

For the inside decorations, they rework the classical-Renaissance elements, such as ironwork, cuttings of the stones of Bagheria and Cinisi, furnishings in the representative and furnishing rooms. The station is a project of the architect Di Giovanni, with decorations made by Rocco Lentini.

Torino Porta Nuova station has a history that parallelly "travels" with that one of the Unification of Italy, starting from the same year of birth, 1861. At the time, Turin was the capital of Italy. Like that, its train station had to communicate the power of the city immediately.

The station is the engineer Alessandro Mazzucchetti's work: a project that combined the functional quality with the typical monumental characteristics of the buildings on the square, Piazza Carlo Felice. Nowadays, Torino Porta Nuova is the central train station of Turin and the third of Italy, after Roma Termini and Milano Centrale.

The station hides a waiting room frescoed in 19th-century style: the Sala Gonin, reserved for the Savoy royal family. This is only open to the public on certain special days, such as the spring days of the FAI (Fondo Ambiente Italiano - Italian Environmental Fund).

Genova Brignone is the second-largest station in the city, after Genova Piazza Principe. It is an exciting building built in the style of the architectural renaissance, the French school of the very early 20th century.

Not far from the city centre, it is located a stone's throw from Via XX Settembre and connects Genoa with Italy and Liguria. In the beginning, the station was nothing more than a wooden building; it was later renovated for the World Exhibition of 1905. The building was completed in just three years, and considering its impressiveness, this is a short time.

Milano Centrale is Italy's second-largest railway station (after Roma Termini) in terms of passenger volume. It is considered by many to be beautiful and exciting, especially from an architectural point of view.

Work began at the behest of Vittorio Emanuele II in 1906. Six years later, a competition was held for a design inspired by Leipzig and Stuttgart stations: a covered tunnel accessible to vehicles. This is how the so-called 'Galleria Delle Carrozze', designed by architect Ulisse Stacchini, took shape. Due to the stoppage caused by the First World War, the station was not opened until 1931.

Milano Centrale is an example of the contamination of Art Nouveau, Art Deco and rationalism. The large public areas are lovely: Galleria di Testa, Biglietteria Centrale and Galleria Delle Carrozze recalling the monumental architecture of Rome. The façade is divided into five iron and glass volumes, the work of engineer Alberto Fava.

Its platform 21 is famous: it first housed the Sala Reale, the waiting room of the Savoy family, and then became a symbol of universal memory. During the Second World War, Jews were deported from this platform to concentration camps. Today, the Shoah Memorial can be seen right next to the forum.

Nicknamed the Gateway to the South, the Napoli Afragola high-speed train station was inaugurated in June 2017 and is considered by many to be the most beautiful station in Italy. The station was designed by Anglo-Iraqi Archi-star Zaha Hadid and distinguished by its sinuous architectural line and bridge structure.

Excavations for the station began in 2003 but were immediately halted for more than a year due to discovering an ancient Mycenaean village dating back to 1500 BC.