The Historic Centre of Rome, the Second Unesco World Heritage Site in Italy

The Roman UNESCO Heritage: from the Colosseum to the Trevi Fountain, the Basilica of Santa Maria Maggiore, the Imperial Forums, Piazza di Spagna, Via Veneto, the Capitol, Piazza Venezia and the timeless places of the Eternal City.

Italy, as we all know, is the country that alone holds approximately 70-75% of the world's artistic and cultural heritage.

UNESCO, the United Nations Educational, Scientific and Cultural Organisation, is committed to protecting, safeguarding and promoting the sites of exceptional value and beauty registered as World Heritage Sites.

Together with China, our country holds the record for the largest number of World Heritage Sites in the world, boasting no less than 55 properties, distributed in different regions. 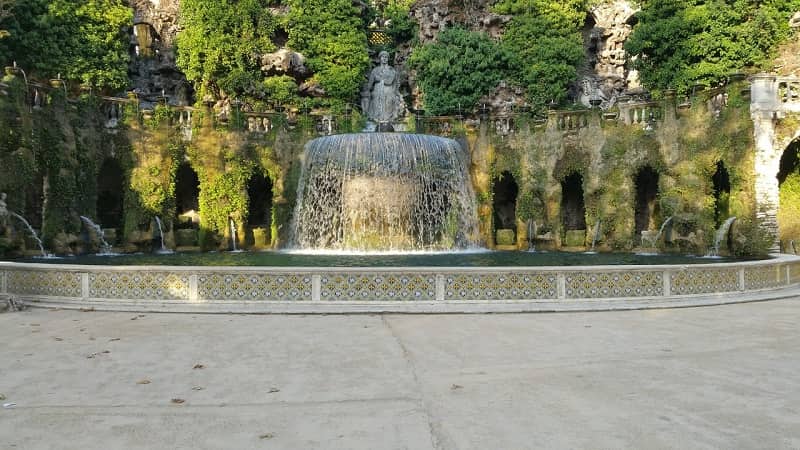 Here as follows, the 6 current sites of Latium recognised on the World Heritage List:

• Historic Centre of Rome (included in 1980), the Properties of the Holy See in that City Enjoying Extraterritorial Rights and Basilica of San Paolo Fuori le Mura (then included in 1990)

• Villa Adriana (Tivoli, in the Province of Rome) included in 1998;

– Machine of Santa Rosa (Viterbo) included in 2013 as part of the Intangible Cultural Heritage of Humanity;

– Monte Raschio beech forest (located at Oriolo Romano, inside the Regional Natural Park of Bracciano and Martignano) and Monte Cimino beech forest in Soriano del Cimino, both part of the Ancient and Primeval Beech Forests of the Carpathians and Other Regions of Europe included in the list in 2017.

The historic centre of Rome as UNESCO World Heritage Site 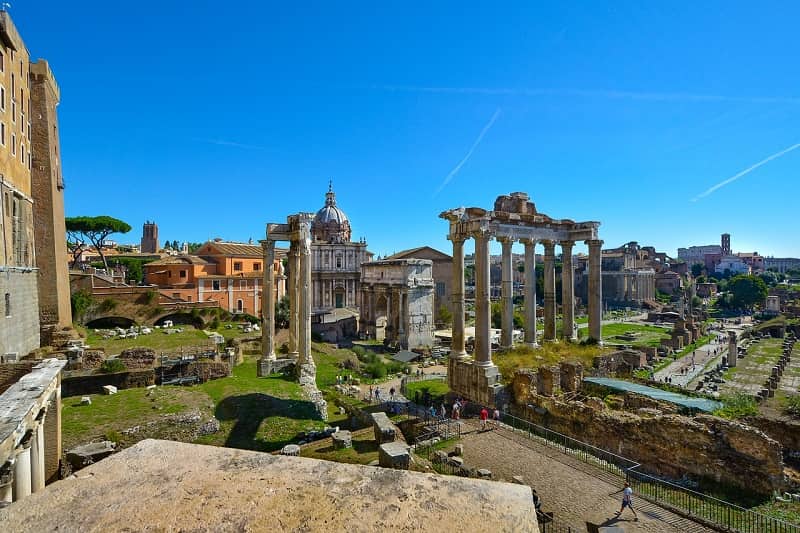 The historic centre of Rome was inscribed on the UNESCO list in 1980 during the work of the 4th session of the Commission in Paris, and was recognised as a World Heritage Site due to the following criteria:

criterion I: The property includes a series of testimonies of incomparable artistic value produced over almost three millennia of history;

criterion II: over the centuries, the works of art found in Rome have had a decisive influence on the development of urban planning, architecture, technology and the arts throughout the world;

criterion III: the value of the archaeological sites of Rome, the centre of the civilization, is universally recognized;

criterion IV: the historic centre of Rome as a whole, as well as its buildings, testifies to the uninterrupted sequence of three millennia of history;

criterion V: for more than two thousand years, Rome has been both a secular and religious capital, being the basis of Western Culture.

Subsequently, in 1990, upon request of the Holy See the Site was finally extended to the he Properties of the Holy See in that City Enjoying Extraterritorial Rights and to the Basilica of San Paolo Fuori le Mura. 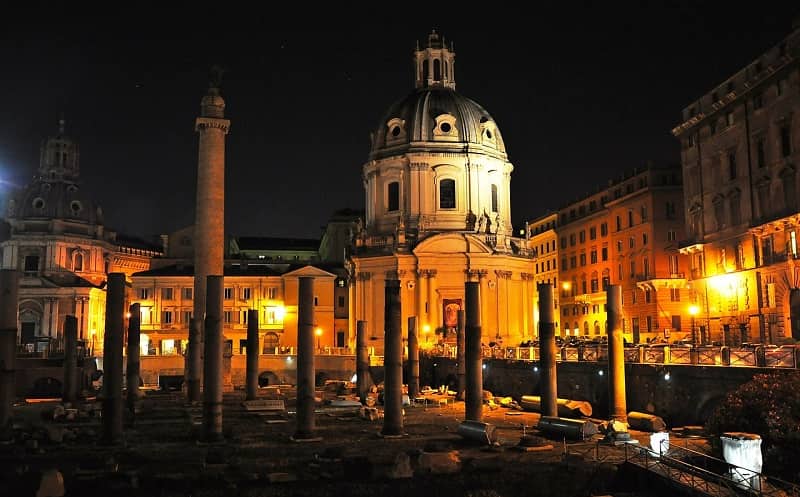 There is no doubt that the historic centre of Rome is a complex of structures and buildings of inestimable value that winds its way inside the city walls (with the exception of the Basilica of San Paolo which, as its name indicates, is located outside the Aurelian walls), covering about three millennia of history.

A journey through time, from the monuments of ancient Rome such as the Colosseum, Palatine, Roman Forum and Imperial Forums, through the urban projects of the Renaissance and Baroque eras, up to modern times (think of the trident connecting Piazza del Popolo to Piazza di Spagna). An incomparable stratification of centuries of history, where the sacred and the profane cohabit and coexist between religious buildings (the three Major Basilicas: Santa Maria Maggiore, San Giovanni in Laterano and San Paolo Fuori le mura) and structures for civil use (Campidoglio, Palazzo Farnese, Palazzo del Quirinale and the Ara Pacis) that guard riches (both pictorial and sculptural) created by the greatest artists of all times.

Itinerary through the 22 Rioni or districts of Rome

Covering a total of 14.692 sq. kms (of which about 14.308 sq. kms fot the Italian part and about 0.38 sq. kms for the Holy See), the site covers all 22 historic Rioni or districts (with the exception of a portion of the Borgo and Prati districts).

It is not easy to establish a criterion according to which describing these wonders could be possible: listing the monuments chronologically according to when they were built, by type of use (religious or civil) or even district by district. We will carry out a more practical excursus district by district which, even if not paying justice to its inestimable heritage and value, can at least give a rough idea to understand the importantce of the site itself. 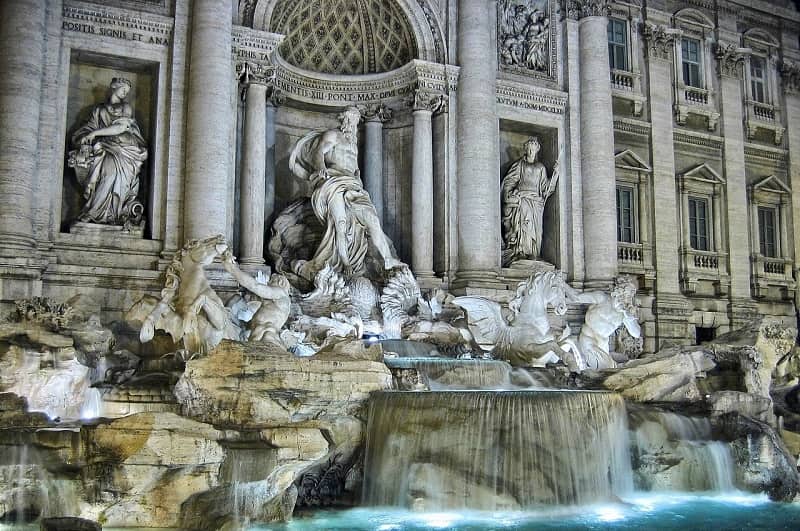 Then, there is also Rione Trevi with its famous Trevi Fountain, the Triton Fountain, Barberini Palace and the Quirinal Palace.

In Rione Colonna, whose name comes from the famous Marcus Aurelius coloumn, there are Piazza della Rotonda, Montecitorio Palace, Chigi Palace and the Palace of the Propagation of the Faith.

The district dedicated to the god Mars, Rione Campo Marzio, is home to the Spanish Steps, Piazza del Popolo, the Fountain of the Port of Ripetta, the famous Trident -consisting of Via del Corso, Via di Ripetta and Via del Babuino- and the Ara Pacis.

Piazza Navona, Piazza della Chiesa Nuova, the Theatre of Pompey, the Palace of the Chancellery and Palazzo Pio (otherwise known as Palazzo Orsini Pio Righetti) are located in Rione Parione. 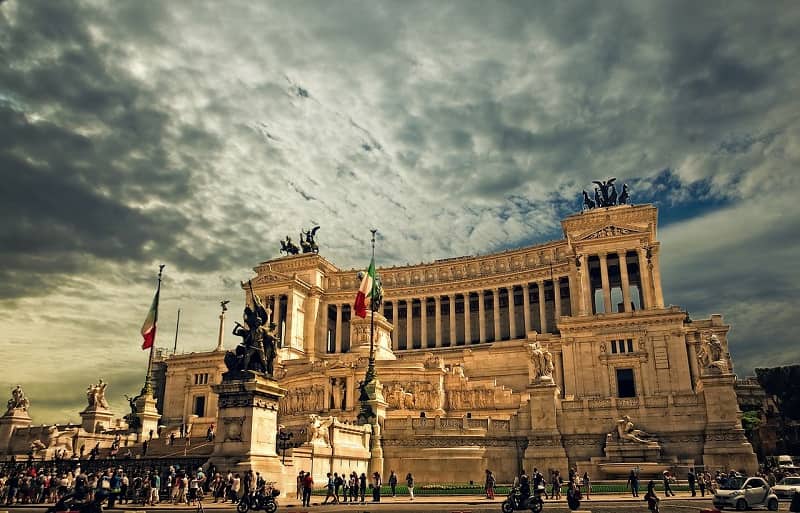 In Rione Pigna, we can admire the Pantheon, Venice Square, the Vittoriano Complex and Palazzo Maffei.

Walking through Rione Campitelli, we come across the Piazza del Campidoglio, the Roman Forum, the Capitoline Museums, the Mamertine Prison, the House of the Vestal Virgins and the Ara Coeli Insula.

In Rione S. Angelo, we find Piazza dei Calcarari, the Jewish Ghetto, the Theatre of Marcellus, the Turtle Fountain and the Portico of Octavia. 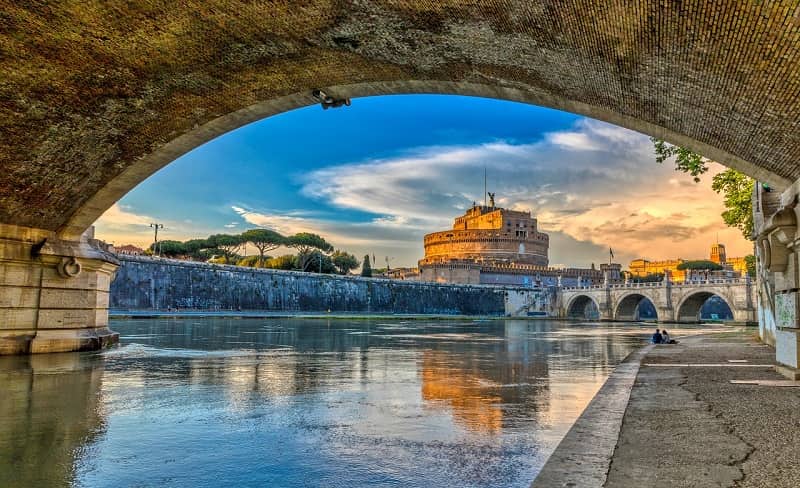 On the Esquiline, there are Piazza Vittorio Emanuele, Porta Maggiore, the Nymphaeum of Alexander Severus, the Temple of Minerva Medica and, among the religious buildings, the Basilica of Santa Croce in Gerusalemme. 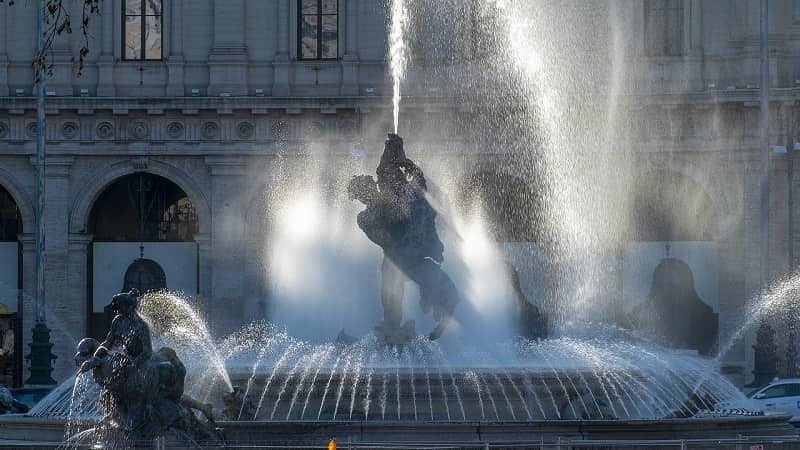 In Rione Ludovisi, we find Porta Pinciana, the Fountain of the Bees and Via Veneto.

The Horti Sallustiani, among the most beautiful gardens in Rome, are located in the district named Rione Sallustiano.

In the Castro Pretorio district we have: the Opera House, the National Roman Museum, Porta Pia, the Fountain of the Naiads, the Acqua Felice Fountain, the Baths of Diocletian, Piazza della Repubblica, the Basilica of Santa Maria degli Angeli e dei Martiri and the Basilica del Sacro Cuore di Gesù. 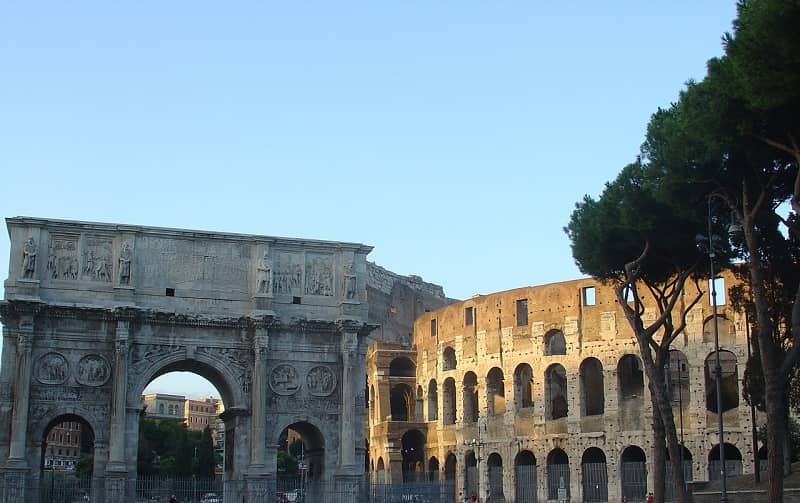 On Rione Celio, whose name comes from the hill, there are the Colosseum, the Arch of Constantine, the remains of the Ludus Magnus and, among the religious buildings, the Basilica of Saints John and Paul and the Basilica of the Santi Quattro Coronati.

A symbol of Romanity, Rione Testaccio includes the Cestia Pyramid, the Amphora Fountain, the Non-Catholic Cemetery and the remains of the Porticus Aemilia.

Finally, the Prati district includes Piazza dei Quiriti, Piazza Cavour, the Museum of the History of the Carabinieri, Piazza della Libertà and Via Germanico. 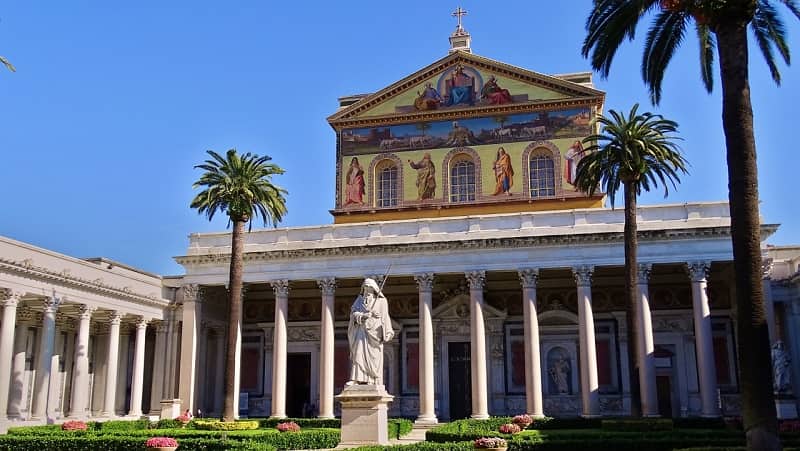 Dulcis in fundo, to close the circle, or rather, outside the Roman walls, the Basilica of San Paolo fuori le Mura, the second largest basilica after St Peter's in the Vatican, stands along the Via Ostiense.

As you can guess, such a vast area full of riches, treasures and priceless goods deserves to be described more deeply and with greater attention. This is only the beginning of an itinerary that will see the UNESCO sites of the Caput Mundi and Lazio as authentic protagonists.

Rome is an example of what happens when the monuments of a city last too long.


If you liked this article, don't miss the complete guide to Italian UNESCO sites, region by region!