Sicily: Arab-Norman Palermo and the Cathedrals of Cefalù and Monreale Unesco site since 2015

The Arab-norman itinerary through Palermo, Cefalù, and Monreale was inscribed in 2015 in the World Heritage List of UNESCO.

Sicily, with its treasures of historical, cultural, and natural importance, boasts seven sites listed in the World Heritage List of UNESCO (it is the region with most sites of all Italy).

The cultural, social and artistic value of the itineray

The site represents the perfect example of socio-cultural, artistic, and religious fusion among the occidental culture, the Islamic and the byzantine one.

It concerns nine historical buildings (two palaces, a bridge, three churches, one cathedral in Palermo plus other two cathedrals in Monreale and Cefalù, two little villages near the country seat) that show how brilliant and clever were Muslims, Normans, and Byzantines but also the heterogeneity of architectural elements which were part of different cultures with opposite styles.

For ages, Palermo is the expression of multiethnicity and integration, and the historic and artistic itinerary tells us how the city connected different cultures and religions so that diversity becomes a source of economic, social, and civil development.

The criteria for recognition

The site Arab-Norman Palermo and the Cathedrals of Cefalù and Monreale was registered in the UNESCO World Heritage List on the basis of two criteria:

CRITERION II Show an important interchange of human values, over a long time span or within a cultural area of the world, on developments in architecture, technology, monumental arts, urban planning, and landscape design. “ Arab-Norman Palermo and the Cathedrals of Cefalù and Monreale is the material testimony of a particular political and cultural condition characterized by the fruitful coexistence of people from different backgrounds (Muslim, Byzantine, Latin, Jewish, Lombard and French). This exchange generated a conscious and unique combination of elements derived from the architectural and artistic techniques of the Byzantine, Islamic and Western traditions. This new style has contributed to the development of the architecture of the Tyrrhenian side of southern Italy and has spread widely throughout the medieval region of the Mediterranean ”.
CRITERION IV Constitute an extraordinary example of a building typology, of an architectural or technological ensemble, or of a landscape, which illustrates one or more important phases in human history. "Arab-Norman Palermo and the Cathedrals of Cefalù and Monreale is an exceptional example of stylistic synthesis that has created new spatial, constructive and decorative concepts through the innovative and coherent reworking of elements from different cultures". 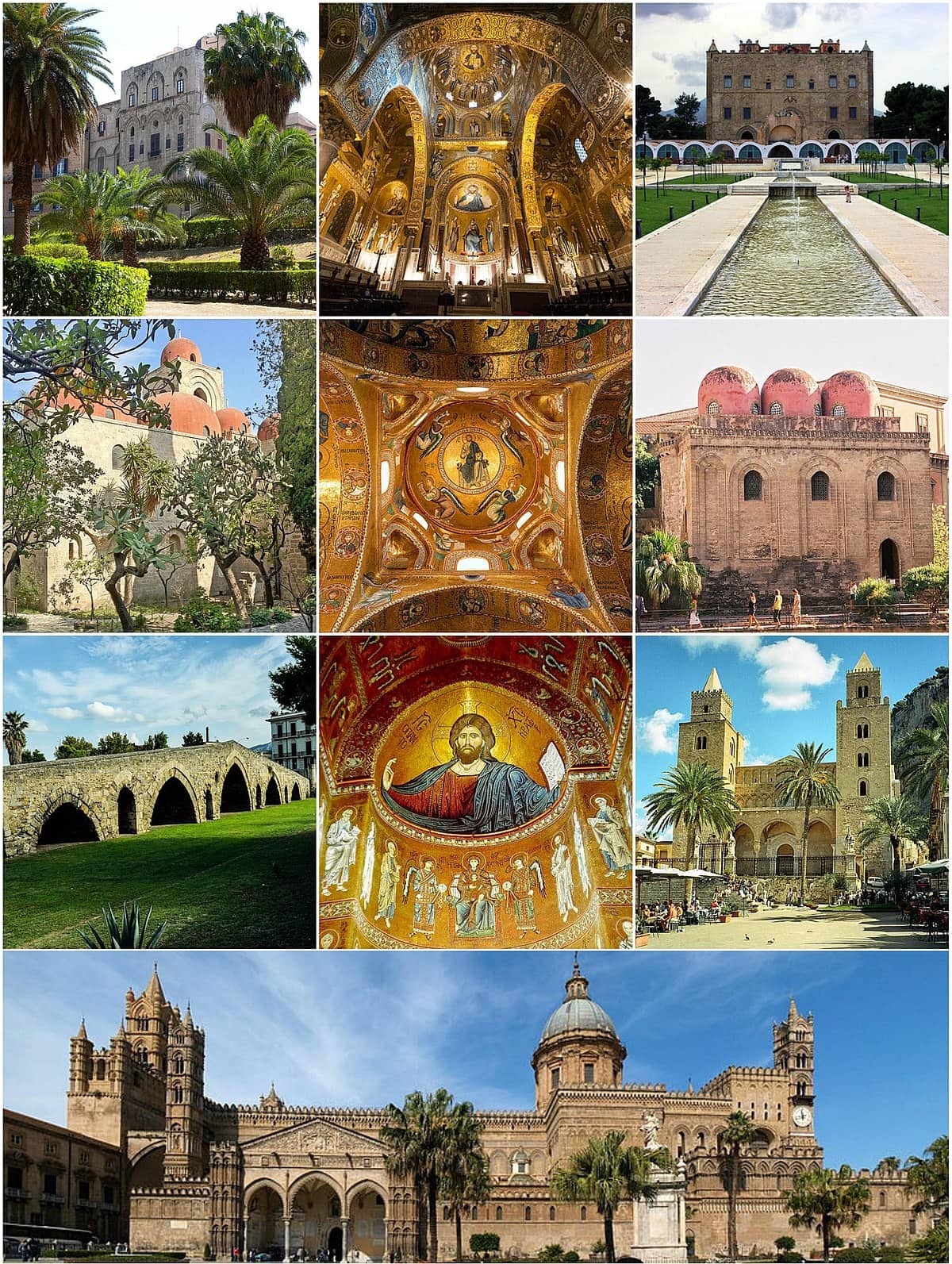 The Royal Palace (or also known as the Norman Palace), the headquarters of the Sicilian regional council, stands in the most ancient point of the town, on the ruins of a Punic village. It is the most ancient abode in Europe.

2. The Palatine Chapel, on the first floor of the Royal Palace, as defined by Guy Maupassant’s words “the most beautiful religious jewel ever dreamed by human thought”. The chapel shows three different architectural styles and cultures, the Islamic, the byzantine the Latin one. Its mosaics are among the most beautiful Byzantine art production, they have no equal in any church of Constantinople. The most ancient mosaics, that is the Christ Pantocrator in the dome, the angels surrounding him, and the Evangelists absorbed in their studies, stand out among the others.

3. Palermo Cathedral, dedicated to the Virgin of the Assumption, stands on the first Christian basilica of the sixth century. It treasures the Sarcophagus of king Federico the 2nd and the Treasury of the Cathedral (one of the most precious pieces is the crown of Constance of Aragon). It is possible to visit the Cathedral rooftop also by night. From here, you can admire some lovely aerial views of the church itself, as well as of the city of Palermo more broadly.

4. The Church of San Giovanni degli Eremiti represents maybe the most “iconic” building of Palermo thanks to the red domes which depict its exotic appearance. 5. The Church of Santa Maria dell’ Ammiraglio, located in the earth of the ancient Palermo, is also known as the Martorana in memory of Goffredo and Eloisa de Marturano, the founders of the nearby Benedictine convent. The church was built in 1143-1185 by the Greek admiral George of Antioch, who wanted to thank the Virgin Mary for her help and protection.

6. The Church of San Cataldo was built in 1154, under the kingdom of William the first. It is the perfect example of the wonderful Arabian-Norman architecture: originally it was the chapel of a complex of buildings, now disappeared. From its blind recessed arches to the floor in porphyry and serpentine, the church simple and elegant is another heritage of the cultural mix between the Islamic and the normal art.

7. The Zisa Palace (from the Arabic term El-Aziz, which means the "Splendid") was founded by King William I, but completed under the reign of William II in 1190 ca. it was inspired by Islamic gardens such as Riyad of Persian origin. A fine example of Moorish architecture, the castle was the king's summer residence and still maintains that feeling of space and relaxation reinforced by the presence of trickling courses of water. Today, the Zisa houses the museum of Islamic Art.

8. The Bridge of the Admiral was built under Roger II (in 1132) and owes its name to the founder George of Antioch, admiral of the kingdom in the service of King. This bridge connected the city to the gardens beyond the Oreto River, is the oldest stone bridge built after the Fall of the Western Roman Empire.

9. The monumental complex of Monreale consisting of the church, the Benedictine convent, and the royal palace, was built at the behest of King William II, between 1172 and 1176. It is part of the Arab Norman itinerary since it is maybe the second biggest byzantine building in the world after the Hagia Sophia in Istanbul. The mosaics cover 6400 meters of walls and they tell some biblical scenes.

10. At the end of the path, there is the Cathedral of Cefalù. It was founded together with the diocese by King Roger II in 1131; there are three naves covered by wooden ceilings, of which the central one retains some remains of the original pictorial decoration with plant and figurative motifs, the work of Islamic workers in Sicily. The central apse, the walls of the presbytery, and the vault of the choir are covered with mosaics made by Byzantine workers (the figure of the blessing Christ Pantocrator stands out).