Lombardy is a region rich in history, monuments and castles. The paths in search of castles are potentially endless. There were many wealthy personalities who, in order to control the territory or to express their power, raised mighty fortresses and manors. Especially between the Middle Ages and the Renaissance, military buildings flourish in practically every city and village. 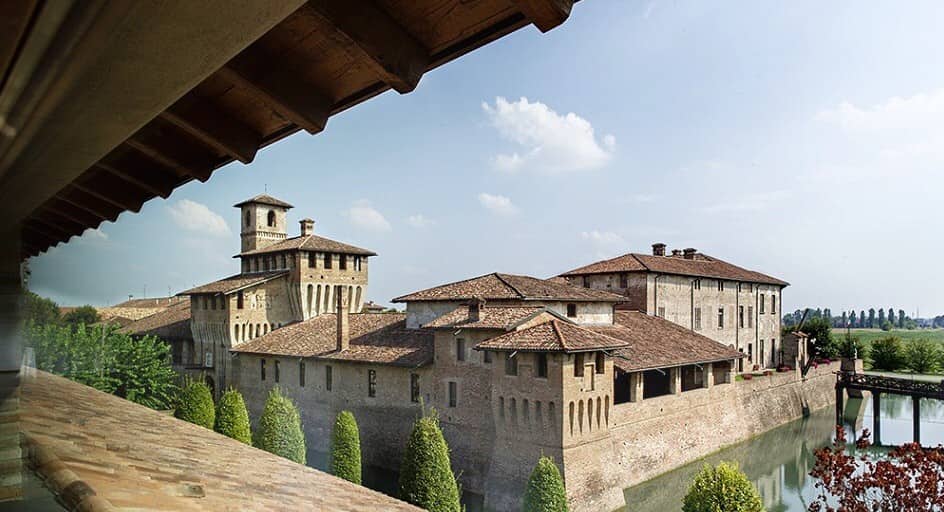 The castle of Pagazzano is located in the province of Bergamo and the original structure dates back to the fourteenth century. Although only two of the four original corner towers remain, the restoration allows you to admire it in all its monumentality. All the patrol walkways and buildings inside the walls are covered by pitched roofs. The external facades are animated by battlements, arches and loopholes, while the interior houses an elegant porch overlooking a beautiful courtyard. The entire fortification, accessible by a bridge (once a drawbridge), is surrounded by a huge moat, still full of water. It was originally a military building, then converted into an aristocratical residence and finally into a villa, as evidenced by the refined interior decoration of the rooms.

The castle of Sirmione is one of the most complete and best preserved castles in Italy. It is also known as Rocca Scaligera, from the name of the Scaligeri dynasty (also called Della Scala), governors of Verona. In fact, in the thirteenth century, when the fortress was built, this territory belonged to Verona, while today it is in province of Brescia. Its peculiarity is the placement within Garda Lake, a strategic control point on the border. It is bathed by water on all sides and accessible from the village via a bridge. It is defended by solid crenellated walls and three towers, plus the Keep 47 meters high. It is a very rare example of lake fortification, and therefore offers a truly pictoresque scenario.

The castle of Vezio, in the province of Lecco, is a picturesque medieval fortress of more than a thousand years old, overlooking the center of Lake Como. It is built on a high promontory and overlooks the entire body of water. The view that was once a necessary strategy of military control, is today a breathtaking panorama. Through a drawbridge you can in fact climb the watchtower. The landscape you can admire is particularly rich in typical vegetation, including a large olive grove, quite unusual for these areas. Yet the oil produced here is very renowned: the d.o.p. (Protected Designation of Origin) "Laghi Lombardi Lario". 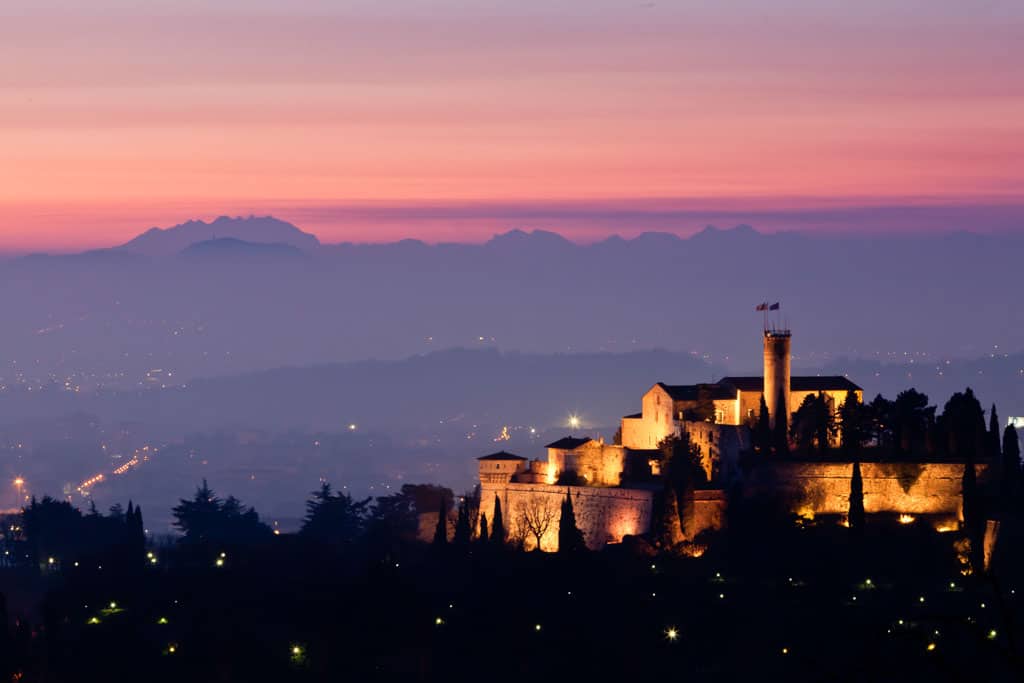 The castle of Brescia, an ancient medieval fortress, is located next to the historic center of the city. It was built from the thirteenth century by the Visconti, who wanted to strengthen the defenses and revalorize the ancient village of Roman origin. The castle occupies an area of 300 meters, making it one of the largest ones in the country. The profile of its mighty walls and high ramparts, is the main feature of the historic center. You can enter the castle through a monumental portal sixteenth century, while you can climb the walls through two drawbridges. Even the rooms are rich and well valued. In fact, they house the Museum of Risorgimento, the one of weapons, and the one of railway models of the "Club Fermodellistico Bresciano". 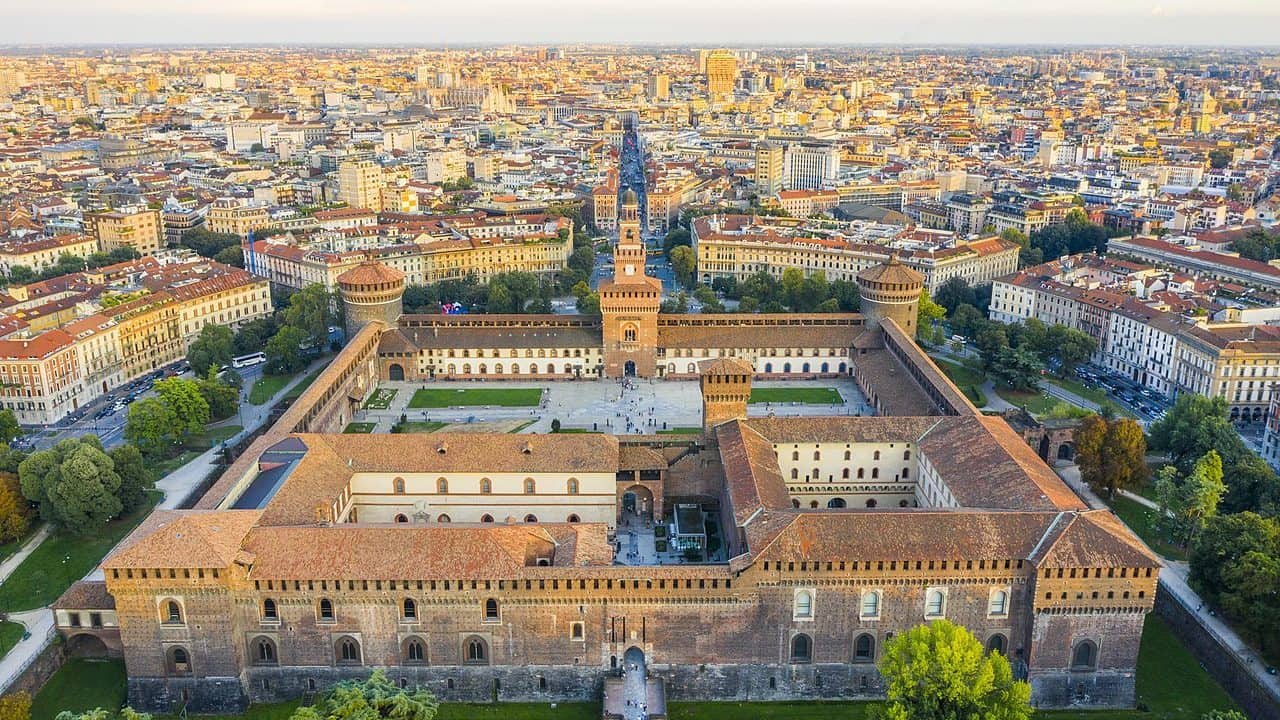 It is impossible to speak about Lombard fortresses without mentioning the Sforza Castle in Milan. In addition to being the most famous and visited of the Region, it is also an emblem of the city itself. Built at the end of the fourteenth century and restored during 1900, it tells a fundamental part of the Italian Renaissance. Its rooms have seen dynasties such as Visconti and Sforza and still house works by geniuses such as Bramante and Leonardo. Do not miss the Sala delle Asse, with the vault completely frescoed by the hand of Da Vinci. Lose yourself in the paths on the patrol walkways, in the basements and be enchanted by the masterpieces preserved in its many museums. And think that Napoleon was going to tear it down completely to make way for a square...

In the middle of a dense forest, a castle gave refuge to those who the night had surprised on the way: knights and ladies, royal processions and simple travelers. I went through an uneven drawbridge...