In Italy, many events related to pop culture and folk traditions are spectacular and engaging for all participants. Let's discover the best ones!

From north to south, from east to west to the islands, all Italian regions have more or less ancient but truly fascinating popular traditions and customs worth getting to know. Many cities and towns on the peninsula organise festivals to celebrate their cultural roots, and often even the smallest villages are enthusiastic about telling their origins and customs through festivals and re-enactments. There are not only 10, but here you will find a selection of some traditional Italian festivals that are impossible to miss. 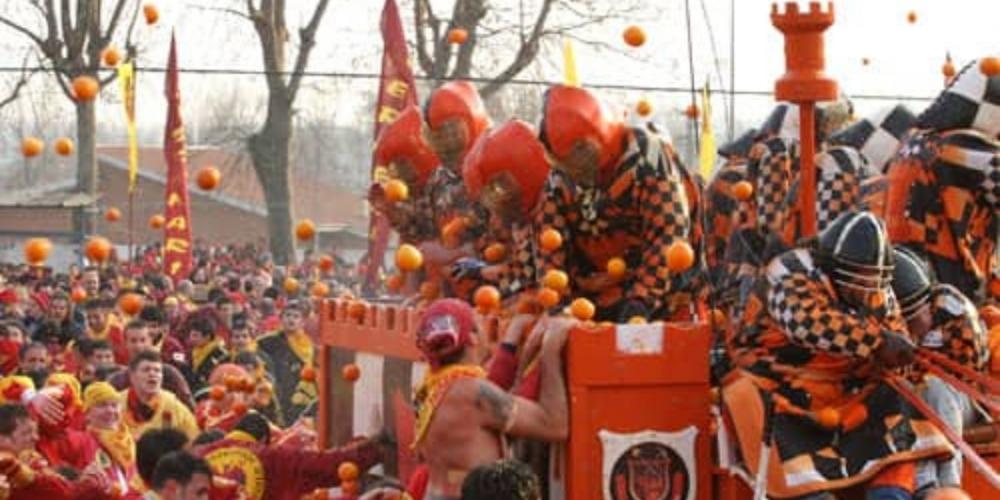 Carnival is a very popular celebration in the Peninsula. It is an opportunity to enjoy the city with colour and fun, wearing traditional clothes that often symbolise traditional events. In Ivrea, Piedmont, the carnival coincides with the famous 'Battle of the Oranges' between the city's contrade (districts in medieval Italian).

The inhabitants of the four contrade of Ivrea wear the typical colours of their township and, as they ride through the streets of the town on floats, throw large oranges at each other as if they were water balloons, which inevitably also hit the spectators walking through the streets.

This festival is linked to the ideals of freedom of the French Revolution, so all participants are required to wear a red Phrygian cap, and those who don't wear it are targeted by the orange-throwers on the floats.

The heroine of the festival is the "Mugnaia", identified by sources as Violetta, the miller's daughter, who was dragged to the castle by the local lord who demanded the "ius prime noctis", a medieval practice that obliged girls to spend their wedding night with the feudal lord; legend has it that Violetta got the lord of the castle so drunk that he fainted before consummating the act, she cut off his head and started the popular uprising to free the town from an oppressive government.

9. Alba, Palio of the Donkeys 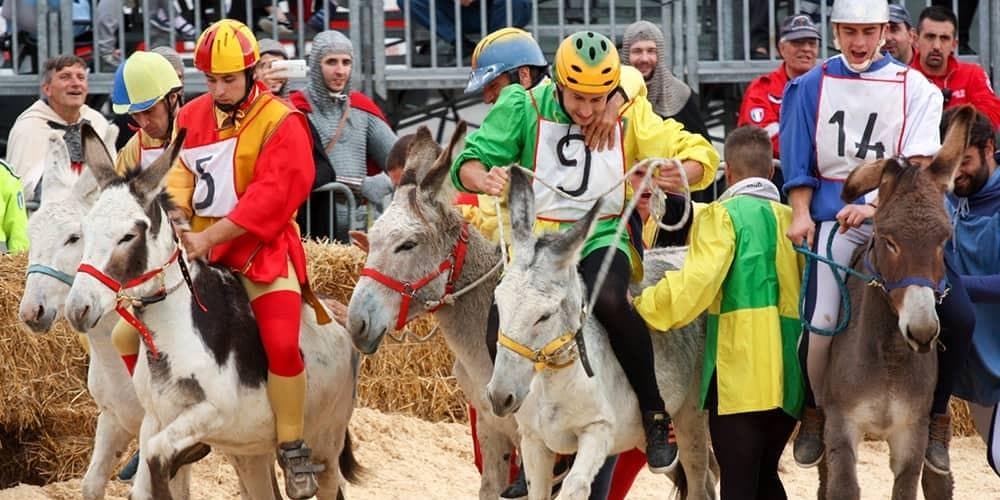 On the first Sunday in October, noble ladies, brave knights, commoners, peasants and flag-waver’s flock to the streets of Alba to celebrate a fun and traditional goliardic event: the Palio degli Asini.

This is a hilarious challenge that takes place on the backs of donkeys that trot through the streets of the city, in a cheerful and very folkloric competition. This challenge celebrates the historical tradition of the city of Alba in the context of the International Fair of the White Truffle of Alba: fun and taste will be the protagonists of these beautiful days in the hills of Piedmont where there will be the excellent wine of the area such as Barbaresco and Barolo. 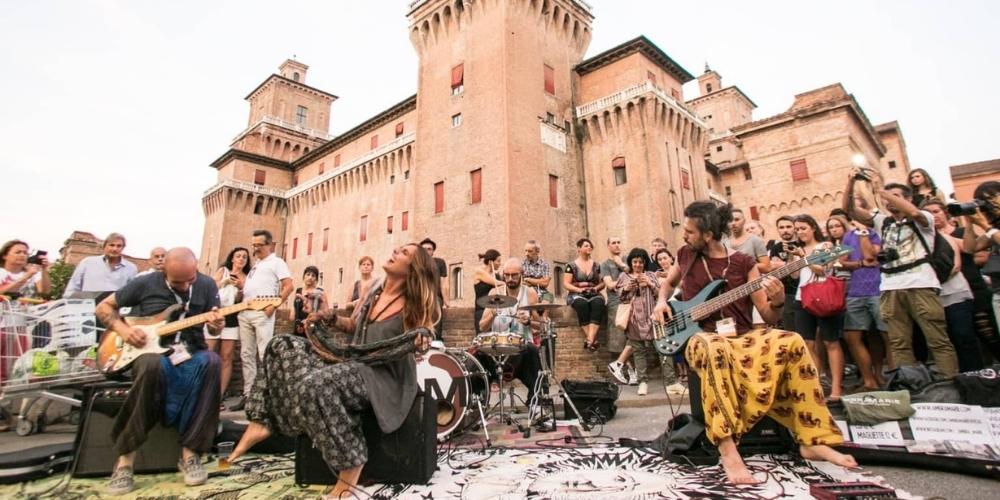 The most beautiful street festival in Italy takes place in Ferrara at the end of August and will leave you breathless with wonder: the medieval city of Emilia is completely dressed up and in every street you can find a young artists who will delight you with all kinds of art, from music to acting, from visual arts to circus.

Street art has a long tradition in Italy, where creativity is often displayed outdoors, taking advantage of the architectural and scenic beauty of our country. The circus and street art tradition will involve and transport you into a world of ancestral fascination, where grace and harmony are displayed in the streets and squares of the city, within everyone's reach. 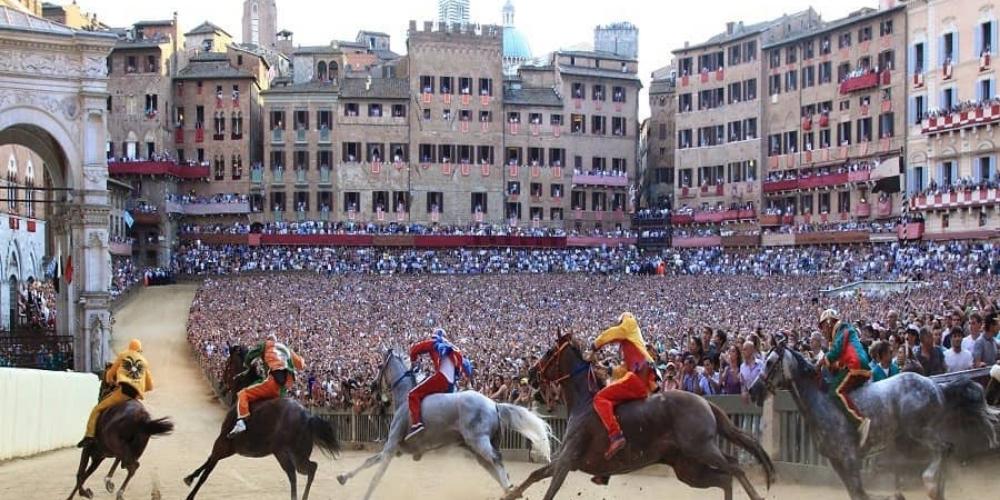 The Palio di Siena is a competition involving the city's seventeen contrade and takes place in the form of a medieval equestrian joust.

The race takes place twice a year (on 2 July and 16 August) in the marvellous Piazza del Campo and sees tourists and inhabitants flocking to every possible corner of the area, to the grandstands, to the balconies of the houses that are 'rented' by the inhabitants for the occasion and wherever there is a chance to watch the race.

The first recorded Palio dates back to 1633 and since then it has been held on an annual basis (except during the world wars) and over the centuries has created precise relationships of alliance or rivalry between the various contrade: the alliances involve real exchanges of gifts and visits, sharing of celebrations in the event of victory and favourable treatment during the negotiations preceding the Palio, while the rivalries are expressed mainly during the competition.

The Palio in Italy is an ancient form of entertainment, and other cities besides Siena preserve this fascinating tradition. A true plunge into the knightly Middle Ages! 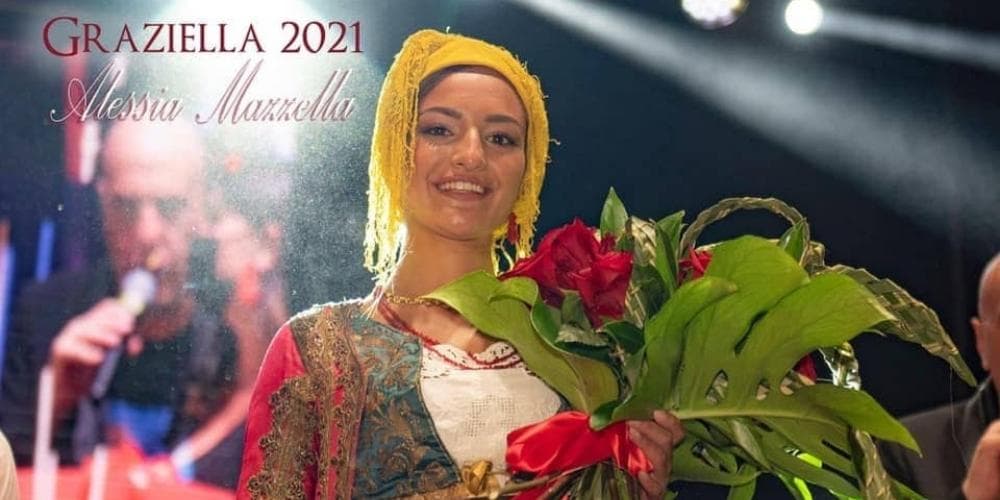 Alphonse de Lamartine, like many other intellectuals of his time, made the ritual trip to Italy during his youth, which brought young people closer to classical culture and Renaissance beauty.

From his stay in Campania he took inspiration for his famous novel 'Graziella', and from his work the inhabitants of Procida took inspiration for their traditional Sea Festival that celebrates the island's indissoluble bond with the marvellous sea that embraces it. The culmination of the celebration is the election of 'Graziella', the most beautiful girl on the island. A summer festival not to be missed, traditionally held in July in the beautiful setting of the Italian Capital of Culture 2022! 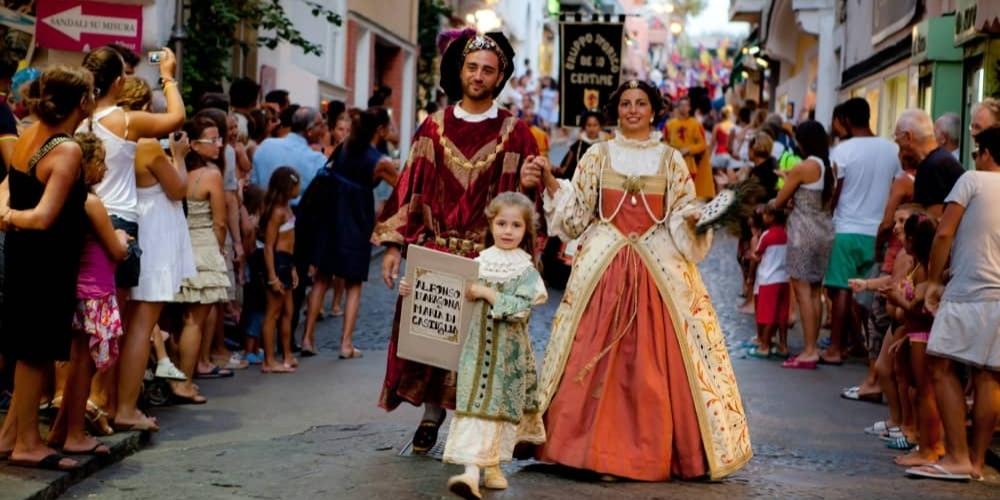 Also in Campania, on the enchanting island of Ischia, there is the annual festival of St. Alexander on 26 August, during which a colourful procession of participants parade through the narrow street in traditional costumes, starting from the Aragonese Castle and ending at the port.

Among the participants, you will be able to identify the Greek colonists of Pithecusa, the Romans in their purple robes and the fluffy stately clothes of the families that ruled the island for centuries, such as the Ferrante, Colonna and Borboni families.

Among the participants, you will also recognise those who pay homage to the island's typical trades such as fishermen, farmers and fan weavers. At the end of the procession, a mass is held in Borgo Sant'Alessandro, after which you can celebrate with a rich banquet of traditional products. 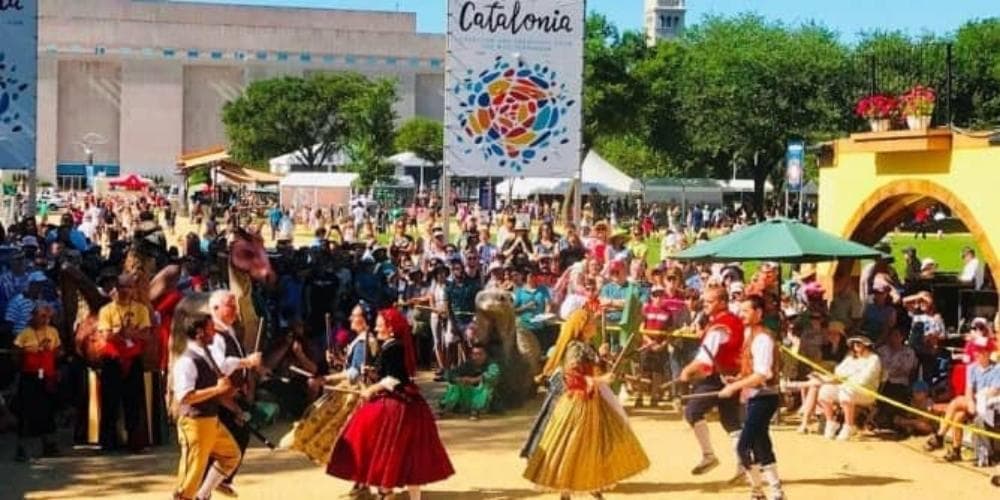 In the fantastic Coral Riviera in the north of Sardinia lies the town of Alghero, a wonderful urban centre overlooking the sea where the architecture, language and customs are based on the Catalan tradition. The Sant Miquel Festival, a folk festival in homage to the city's patron, takes place in this stunning setting in mid-September.

The calendar of events is extremely varied, from music concerts featuring artists like Antonello Venditti, and completely original events such as the Cooking Cup (a sailing and culinary regatta), to street performances with clowns and puppets. In addition to these, editorial reviews, author aperitifs, and appointments dedicated to the future of tourism, such as workshops focusing on gamification to promote the city's cultural heritage through the dynamics of game design.

One of the most important festivals in Sardinia, straddling past and future. For more information, consult the calendar of Salude & Trigu, the Sassari Chamber of Commerce project created to highlight all the most fascinating events in the North of the island.

3. Feast of the Blessed Virgin of Defence in Stintino 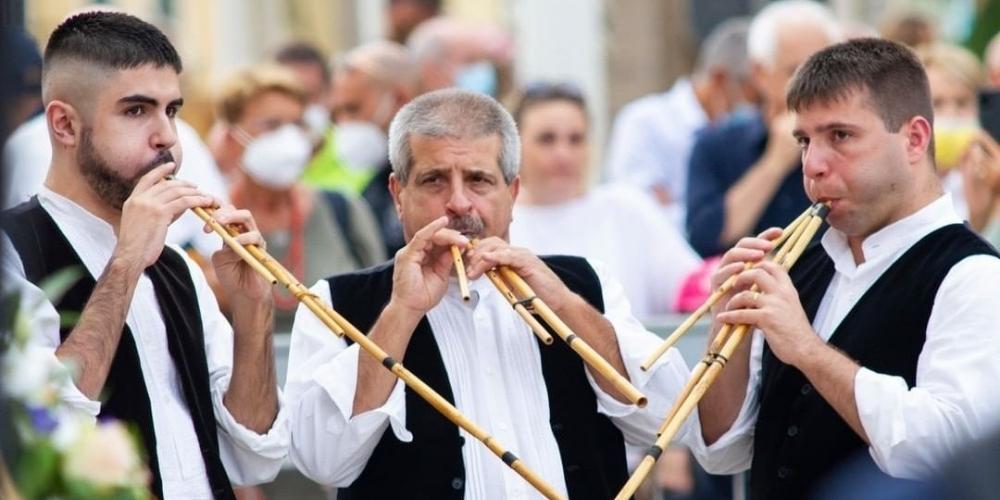 Sardinia is a land that boasts a popular culture rich in traditions and events. Here, the village of Stintino rises in one of the most beautiful settings on the island and was founded by 45 families from Asinara who were forced to leave their homes.  The patronal feast of the village, celebrated on 8 September, is dedicated to the Beata Vergine della Difesa (Blessed Virgin of Defence). It commemorates when, in 1885, the simulacrum of the Virgin was carried by boat from Asinara to Stintino.

The 'procession at sea' is attended not only by the inhabitants and representatives of the religious confraternity 'Beata Vergine della Difesa' in their typical dress but also by local authorities and Sardinian folk groups. It is also a very evocative moment for visitors who can participate in a traditional festival that includes shows, entertainment and the inevitable Sagra del Pesce (Fish Festival) in Piazza dei 45. 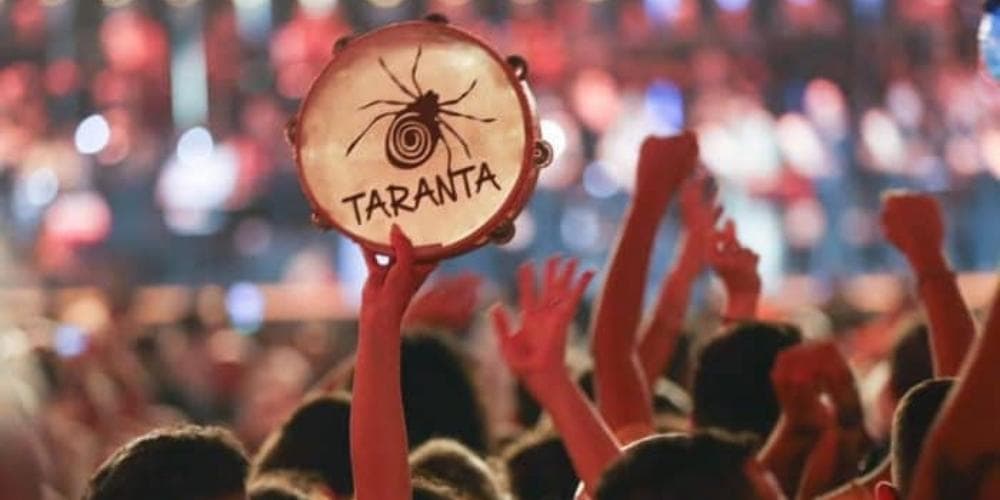 The Notte della Taranta is one of the biggest festivals in Italy and one of the most significant manifestations of popular culture in Europe.

The event takes place every year in August in Salento in the municipality of Melpignano, in the esplanade of the Augustinian convent, and attracts many Italian and international musicians as well as large crowds of tourists who are spending the summer in Puglia.

The event is mainly dedicated to the promotion of traditional music from Salento and its fusion with other musical categories such as rock, jazz and symphonic music.

The main protagonist is the 'pizzica', a lively dance that goes back to the ancient tradition of the ritual of healing from the bite of the tarantula, a spider present in the region during harvest time.

Its bite caused a general malaise that could only be cured with music: the sick person would start to shake from head to legs, crawling on his back, keeping close to the ground and thus identifying himself completely with the figure of the spider and thus recovering from its bite. 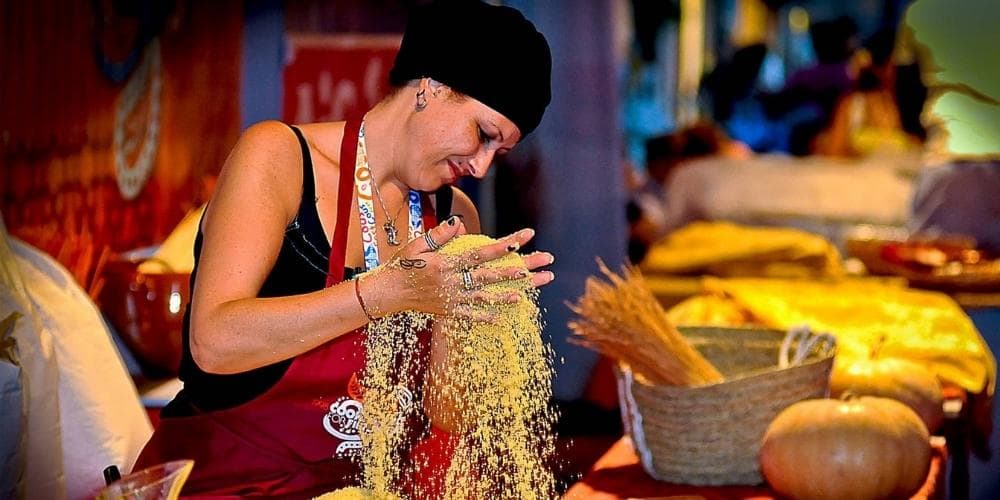 To celebrate Italy's cultural traditions, we cannot forget our Mediterranean origins, especially in Sicily. On this sunny and beautiful island, one of the typical dishes is couscous, a traditional Maghreb dish found nowhere else in Italy except in Sicily, which thus manifests its strong link with North Africa.

Over the years, the event has consolidated its position as a festival of cultural integration, with the grains of cous cous semolina becoming a symbol of brotherhood between peoples but also of the enhancement of regional peculiarities.

However, the event is not just about food, there are also wonderful concerts, cultural activities and shows. Immerse yourself in the folkloric heart of the Mediterranean and experience being halfway between the European and African continents! The Cous Cous Festival is held annually in the second half of September.