The history of its foundation must be traced back to the Middle Ages. The hermitage is prior to the 11th century and was restored by Pietro dal Morrone, the future Pope Celestine V, around 1250. He settled here around 1274 for at least two years, on the return of his trip to Lyon made to obtain from Pope Gregory X the recognition of his Congregation of the Celestines.

We are in the municipality of Roccamorice, a few steps from another hermitage, that of Santo Spirito a Majella, here it is located on a rocky spur of about 50 meters at 700 m above sea level in the Majella, the hermitage of San Bartolomeo.

The history of its foundation must be traced back to the Middle Ages. The hermitage is prior to the 11th century and was restored by Pietro dal Morrone, the future Pope Celestine V, around 1250.

He settled here around 1274 for at least two years, on the return of his trip to Lyon made to obtain from Pope Gregory X the recognition of his Congregation of the Celestines.

The hermitage consists of a chapel and two rooms dug into the rock for the hermits. Access can be via four different stairs, always dug into the rock. The one to the north consists of 30 steps while the one to the south is longer and more irregular. There are also two stairs in the centre of the balcony, one of which is called the Holy Stairs. Along the balcony there is a basin for the collection of rainwater.

The façade of the church has traces of frescoes severely damaged by the weather and inscriptions that have scratched the surface. The portal of the church consists of a simple stone architrave.

The interior of the church is rectangular, with a length of 7.70 m and a minimum width of 3 m and maximum width of 4 m. Lighting is provided by a French window, while a second window has been transformed into a semicircular niche.

The niche of the altar houses a statue of St. Bartholomew depicted with a knife, the motif of this representation must be traced back to his martyrdom, in fact the saint suffered flaying. The statue is the object of an intense religious devotion, on August 25th the faithful lead it in procession after going down to the Capo la Vena stream to bathe according to a very ancient ritual, and then take the effigy of the saint to the village church, where it remains until September 9th.

If you feel like walking in the luxuriant nature of the Majella woods, there are two different routes that will lead you to your destination: the first one descending from Valle Giumentina will allow you to see the hermitage hidden among the rocks, while the second route descending from Roccamorice, ends with a suggestive tunnel carved in the stone that leads to the structure.

How to get to the hermitage of San Bartolomeo in Legio? 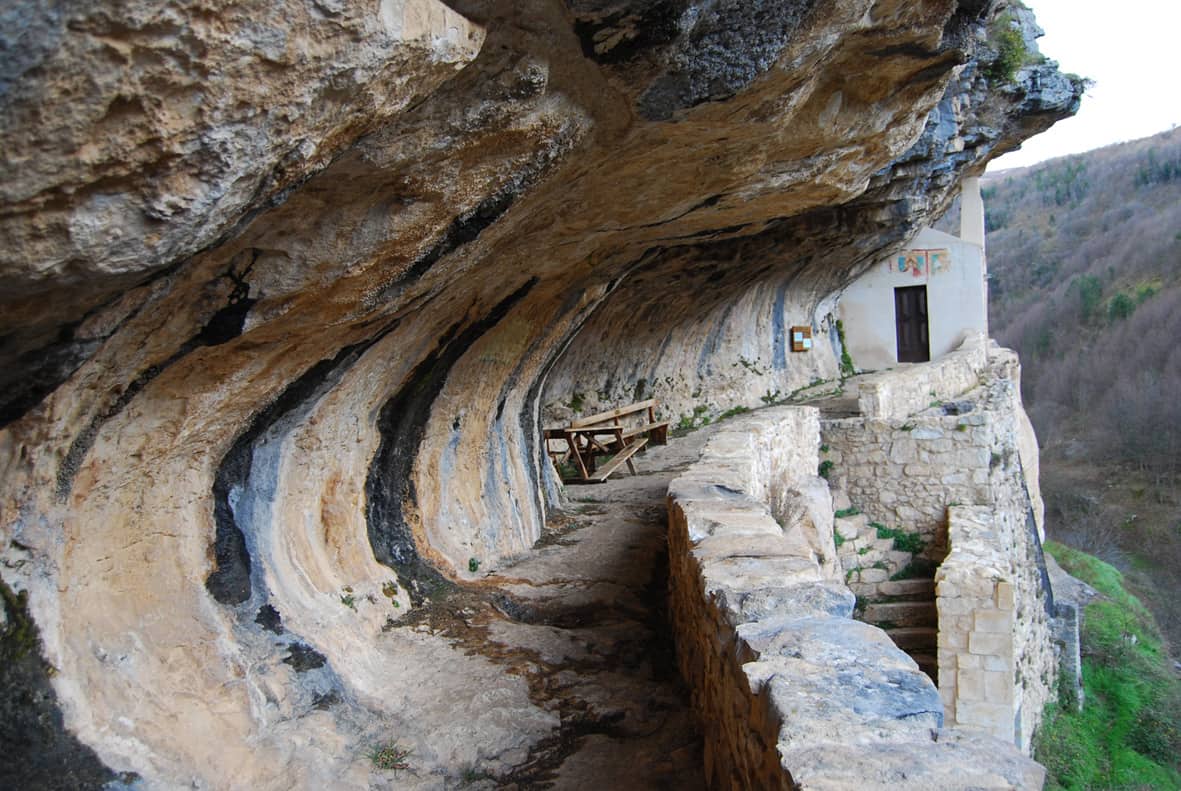 Some information may be useful to know how to get there. First of all we say that the hermitage is located 13 km from Caramanico Terme which is the road to Roccamorice.

From Pescara you can take the equipped axis in the direction of Manoppello. From there you have to continue to Scafa and once you pass the village, you have to turn left to Caramanico/Roccamorice/San Valentino in Abruzzo Citeriore. The signs are clear and at a certain point take the SP 22 to the village of Roccamorice, from where the signs for the Eremo follow one after the other.

Alternatively, to speed up the route we suggest you take the A25 towards Rome and exit at Alanno/Scafa. The Eremo is about 10 minutes from Roccamorice, in Macchie di Coco.

The route is classified as family-friendly. So you can take your children with you, so they can have a unique experience. We advise against strollers because they are not suitable for the type of route. For the rest, put on suitable footwear and set off on this fantastic adventure. The hermitage awaits you!