The 12 most beautiful waterfalls in Italy

The natural beauties in Italy are endless: today we are going to discover the most beautiful waterfalls in the Bel Paese.

The most famous waterfall in Italy is undoubtedly the gigantic and evocative Cascata delle Marmore in the Valnerina, in Umbria, but from north to south, all over Italy, there are countless waterfalls that create breathtaking spectacles. Here there is a list of the 12 most beautiful waterfalls in Italy; beautiful natural waterfalls but also ingenious man-made waterfalls, from the best known and most photographed, such as the picturesque Cascate del Mulino di Saturnia, in Tuscany, to the spectacular Cascata di Capo Nieddu, on the west coast of Sardinia. Prepare yourself for a trip to discover these wonders set in Italy's most beautiful natural sceneries. The Orobic Alps surrounding the waterfalls

Among the high mountains surrounding the upper Val Seriana, in the province of Bergamo, there are the Serio Falls. Formed by the Serio River, at a short distance from its source in the Orobic Alps, the Serio Falls are located at an altitude of about 1750 m, the tallest waterfall in Italy. In order to reach the best observation point, you should start from Valbondione and continue along the road in the direction of the Antonio Curò Refuge, along a trek that takes about two hours. It is possible to admire this spectacle five times a year, from May to October on scheduled days, when the mass of water is released from the Barbellino dam. 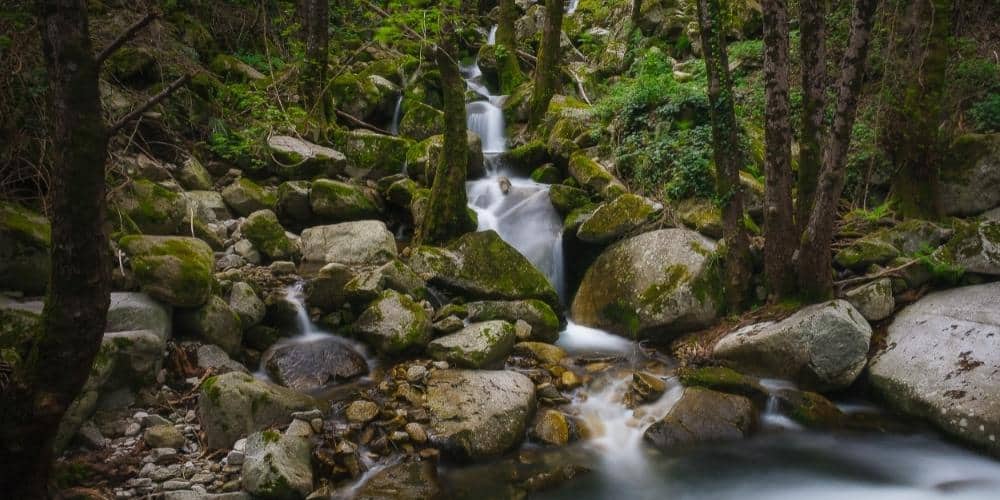 The Marmarico waterfall within its forests

The highest waterfall in Calabria and in the whole Southern Apennines is the Marmarico waterfall. The waterfall is 114 metres high and springs from the waters of the Stilaro River, in the Folea Valley. The Marmarico waterfall is part of the Serre Regional Park, located near the municipality of Bivongi, in the province of Reggio Calabria. A waterfall formed by 4 jumps that ends in a crystalline lagoon, full of dragonflies and butterflies: a small corner of paradise. 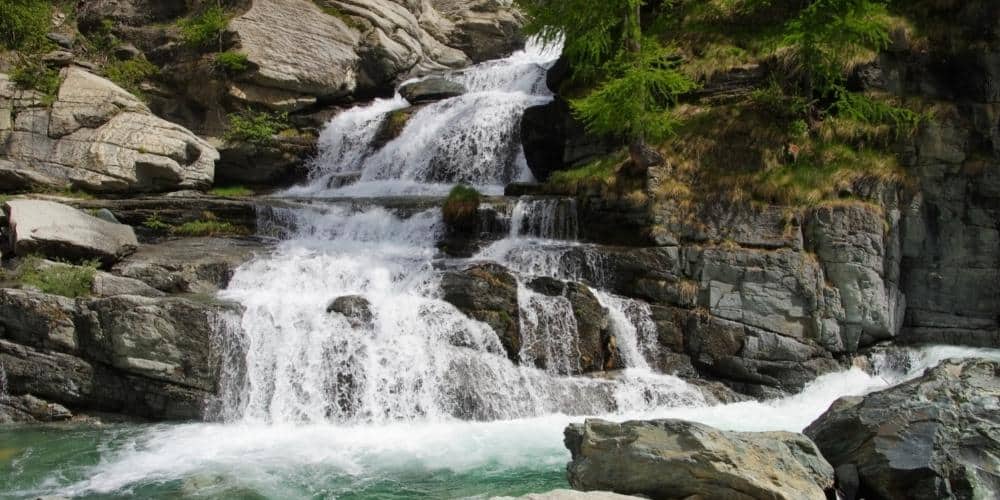 The final jump of the Lillaz waterfalls

On the other side of Italy, in the far north of the peninsula, we find the Lillaz waterfalls, in Aosta Valley. Located in the heart of the Gran Paradiso National Park, in the municipality of Cogne, these three-tiered Alpine waterfalls are a true spectacle of nature. The waterfalls can be admired after a simple 10-minute easy walk from the village of Lillaz. These famous waterfalls are characterised by three jumps of water from the Urtier Stream, for a total height of 150 metres. 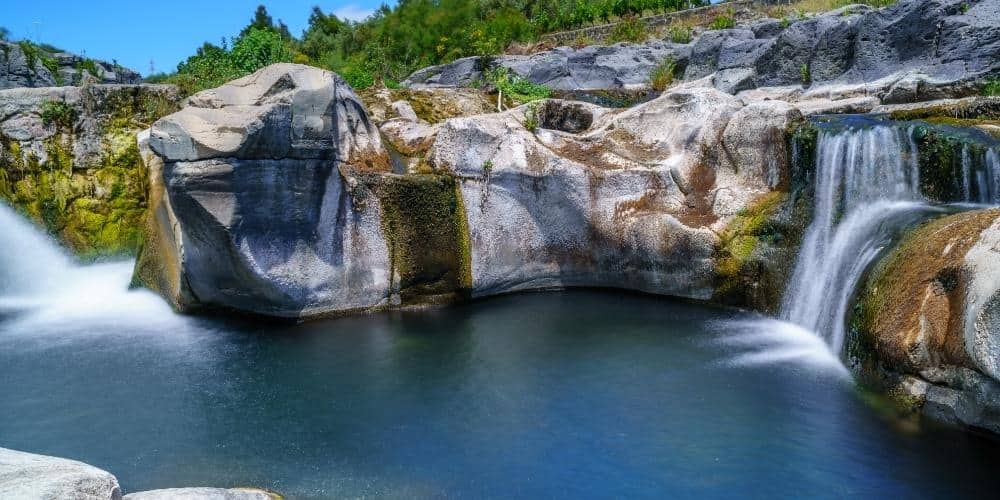 The two waterfalls that feed the gurna

In the Sicilian hinterland, just a few kilometres from Taormina, there is a spectacular place, the Alcantara Valley. In the stretch between Castiglione and Francavilla di Sicilia, the Alcantara River, thanks to its incessant erosive action carried out over thousands of years on the lava flows, has created a series of small round lakes known as Gurne. The park has created a nature trail that can be followed on foot and which allows visitors to visit some of these gurne; among them, there is one in particular that is considered the most important: the Gurna della Passerella. This gurna is fed by two waterfalls of about 5 metres high. 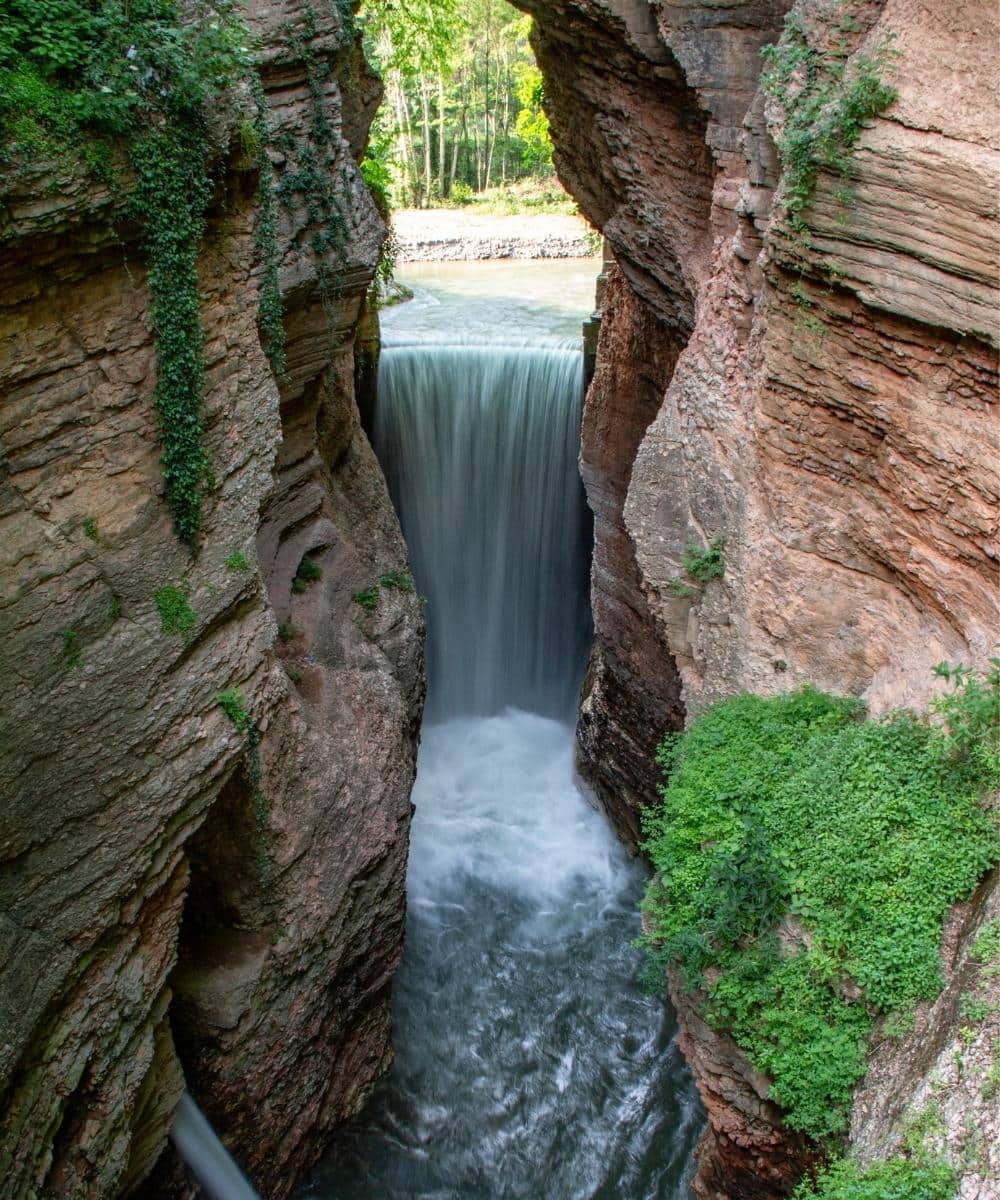 One of the two waterfalls of the Gorge of Ponte Alto

Among the many waterfalls present in Trentino, there is a very special place: the Gorgre of Ponte Alto. At a short distance from Trento, you can admire two beautiful waterfalls of over 40 metres plunging into a narrow canyon between the rocks. From the train station you can take an extra-urban bus to reach, in less than half an hour, the Gorge of Ponte Alto, a spectacular canyon carved by the tumultuous waters of the Fersina Stream. It is possible to walk along a path between the rocks, only accompanied by expert guides, in order to admire the waterfalls up close. Waterfalls gushing through the ferns

In Campania, among the many natural beauties of Cilento, we find the Cascate dei Capelli di Venere (The Hair of Venus waterfalls) in Casaletto Spartano, which seem to come out of a magic tale. The Capelli di Venere (Hair of Venus) waterfalls, in the Capello area, rise from the waters of the Rio Bussentino. They are so called because in the oasis where they are located there is a type of fern called Capelvenere (venus hair fern). The waterfalls create natural pools where you can refresh yourself and where the bravest can bathe, considering that the water temperature is only 6/8 degrees. 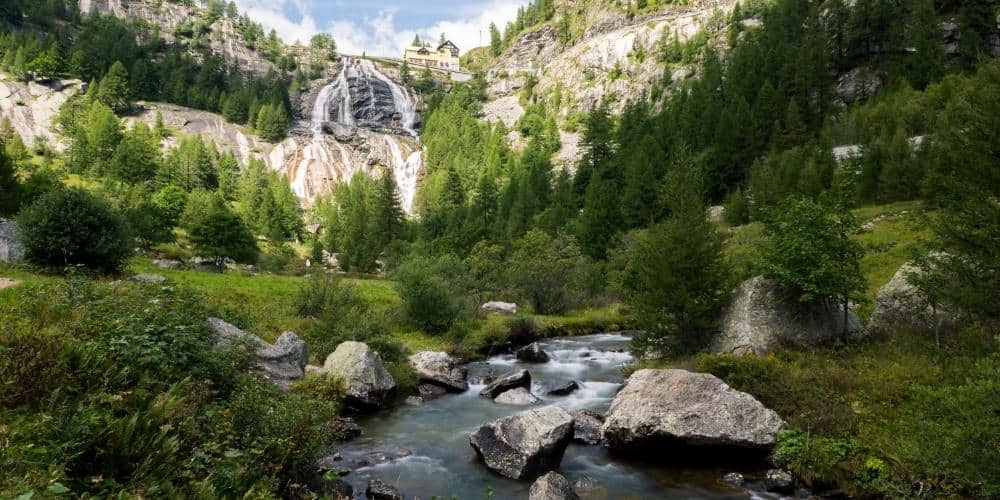 The landscape surrounding the Toce Waterfall

The Toce Waterfall in the Formazza Valley is described as "the most beautiful, the most powerful waterfall in the Alps". However, this spectacular 143-metre waterfall is only completely visible in summer months, during certain hours, as its waters are used for hydroelectric purposes. At the top there is a fantastic observation point: a small wooden balcony stretched out over the waterfall, from which it is possible to observe all the power of the Toce River. 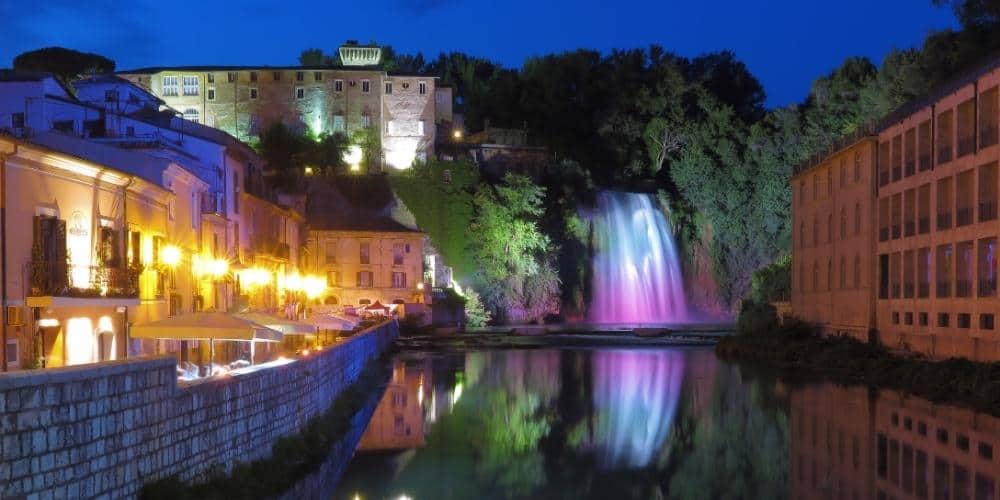 In Lazio, in the province of Frosinone, it is possible to admire a waterfall that is perfectly integrated into a city context. In the small municipality of Isola del Liri, in Ciociaria, you will find the Cascata Grande del Liri. This beautiful town in the province of Frosinone boasts a marvellous historic centre, which was created on an island formed by the Liri River which, at the height of the Boncompagni-Viscogliosi Castle, plunges 30 metros in a rectangular shape. A real urban waterfall that leaves the spectator breathless in front of a water spectacle that is, to say the least, picturesque. 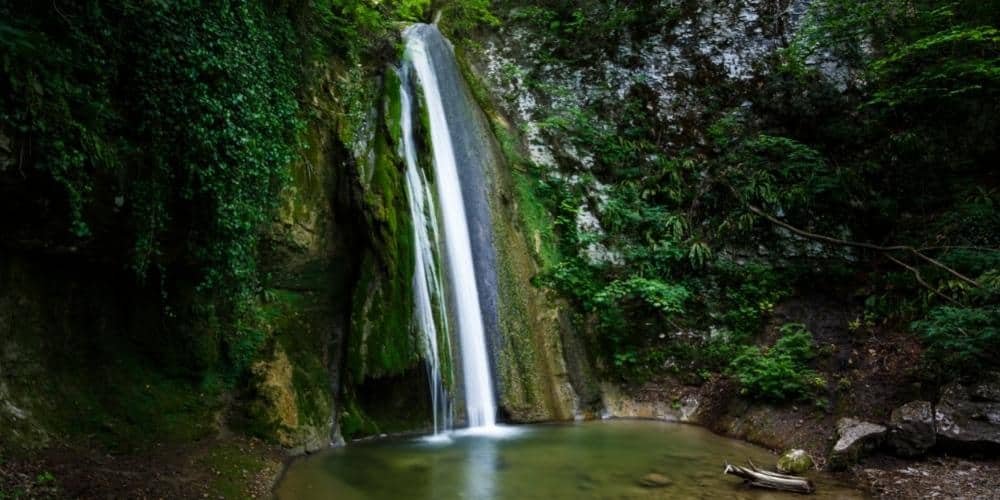 One of the various waterfalls in the park

In the province of Verona, there is the Molina Waterfalls Park, a natural oasis of 80,000 square metres rich in waterways and characterised by a very varied flora and fauna. Inside the Waterfalls Park there are three itineraries suitable both for families and for the more adventurous explorers, which will allow you to walk among the numerous waterfalls present in the park. In front of the Cascata Nera (Black Waterfall) there is a swing that will allow you to soar through the sky towards the waters of the beautiful waterfall, a unique experience for young and old alike. The Capo Nieddu waterfall plunging into the sea

One of the most spectacular waterfalls on this list is undoubtedly the Capo Nieddu waterfall, located on the west coast of Sardinia. The waters of the Cabu Nieddu waterfall plunge directly into the Sardinian Sea, making a 40-metre drop and creating a spectacle that is almost unique in Italy. We are precisely on the Montiferru coast, in central-western Sardinia, where the Salighes Stream catapults into the sea. The spectacle is most visible in spring, thanks to the winter rains. 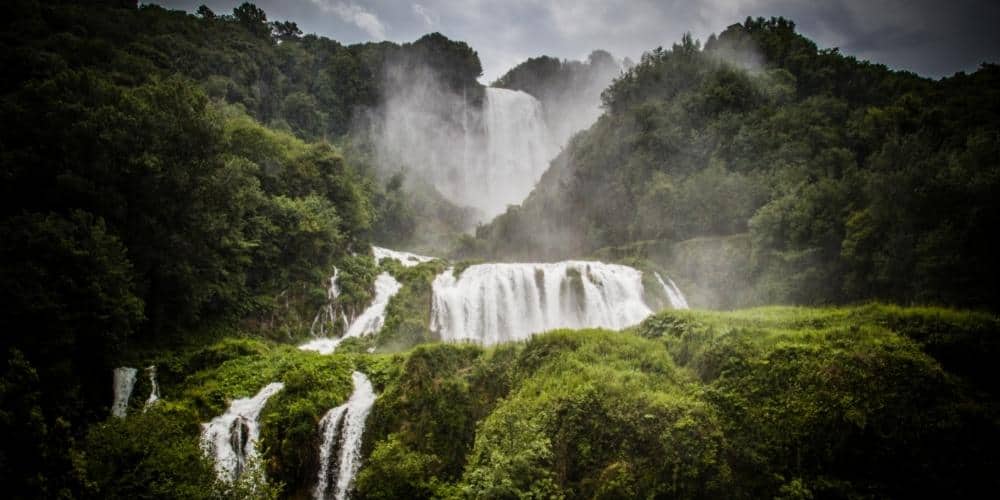 View of the Marmore waterfall from below

Here we are at the most famous waterfall in Italy: the Marmore Falls. The waterfall is located about 7 km away from Terni, in Umbria, almost at the end of the Valnerina Valley. Created at the behest of the Roman consul Manio Curio Dentato, with its 165 metres, divided into three jumps, this flow-controlled waterfall is the highest artificial waterfall in the world. There are numerous paths to follow in the natural park, as well as view points from which you can admire it. If you're lucky enough, you'll be able to admire its rainbow, which forms on sunny days when the water of the Velino River is fully released. 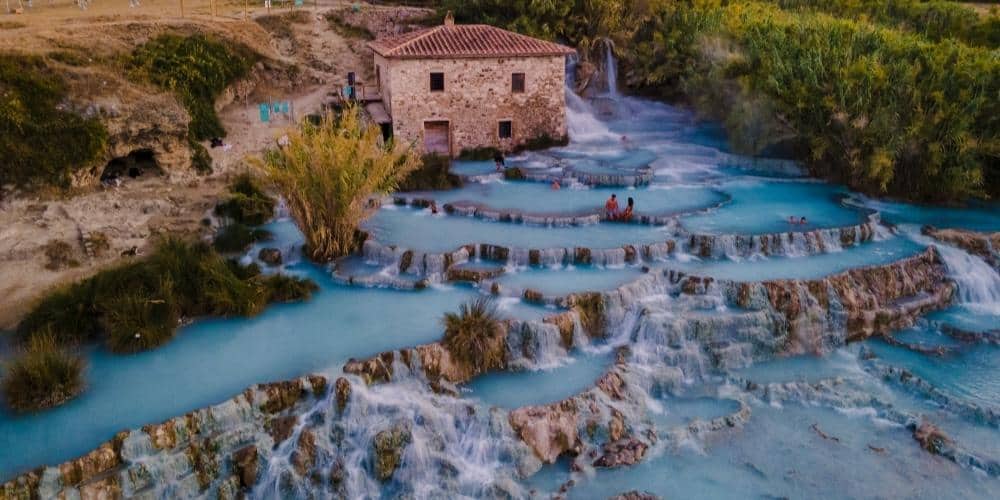 The thermal waterfalls of Saturnia

We conclude our list with the Cascate del Mulino di Saturnia (Saturnia Waterfalls), one of the most unique and spectacular waterfalls in Italy. In the heart of the Maremma there is a place that was created naturally by the action of a waterfall of sulphurous thermal waters generated by the Gorello thermal stream: the Cascate del Mulino di Saturnia. Included on the list of the destinations to see at least once in a lifetime by the New York Times and The Guardian, in the Gorello waterfalls the water flows naturally at a temperature of 37.5°C. The falls, being a natural and free place, are open 24/7, even in winter, and the admission is free.