Discovering Sicily: itinerary of the island in 10 steps

Sicily offers tourist experiences of all kinds. From a nature tour to exploration of ancient ruins. Arab, Norman and Byzantine influences have given life to a region with a strong cultural identity. Its beauties and traditions are the result of a history that has very ancient origins.

Sicily, elegant cities, crystal clear sea, mountains and archipelagos. The largest Italian island has surprised travelers since ancient times. Like all seaside places, it has historically united various cultures, creating a truly unique melting pot of art and traditions. In this corner of Paradise, immersed in the Mediterranean, evidence of the occupations of the peoples of the past unite with harsh and uncontaminated territories and traditions and cultures rooted in time.

Arab, Norman and Byzantine influences have given life to a region with a strong cultural identity. You want to explore it all, and stop and admire every corner. Let's see, therefore, the main itineraries to visit Sicily and learn about its ancient culture.

HERE YOU CAN BOOK ALL THE ATTRACTIONS OF SICILY ❯

10. Temples of Segesta and Selinunte 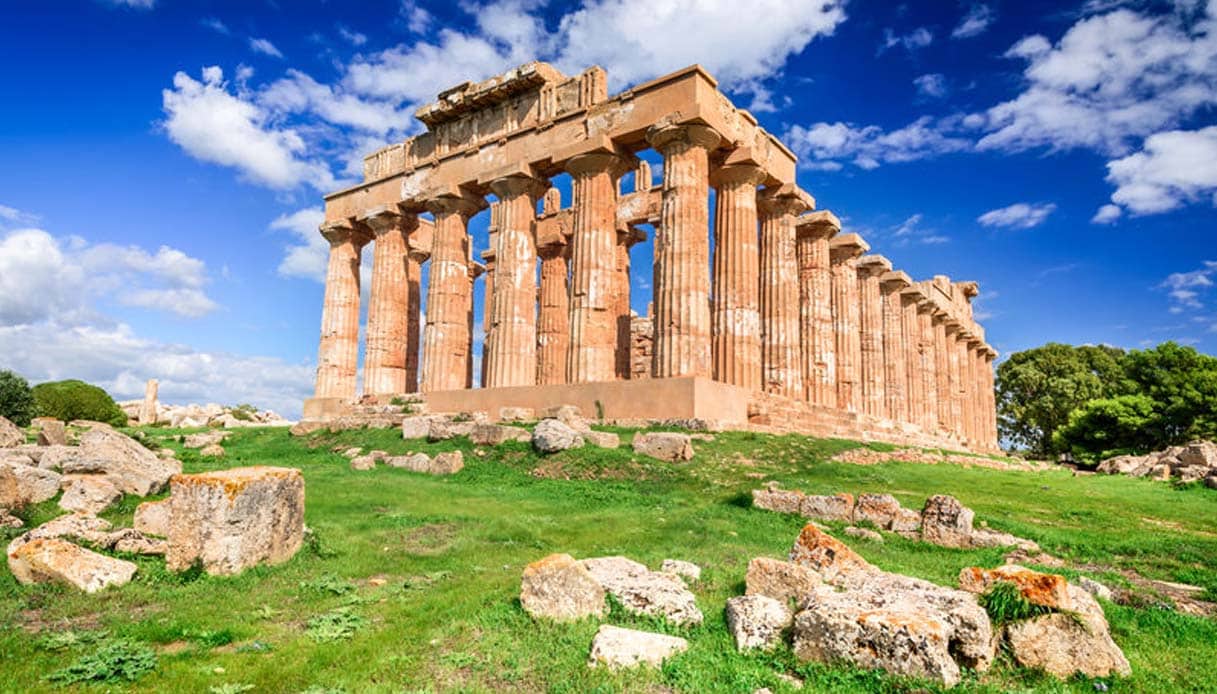 An important stop in archaeological Sicily are the temples of Segesta and Selinunte. In the first, the famous Doric style temple and the Hellenistic amphitheater take us back in time to the 5th-3rd century BC. Its historical rival was the city of Selinunte, a Greek colony founded in 650-628 BC. the Doric temples of the archaeological park remain as majestic as they were in antiquity. Traces of the important past of Magna Grecia. 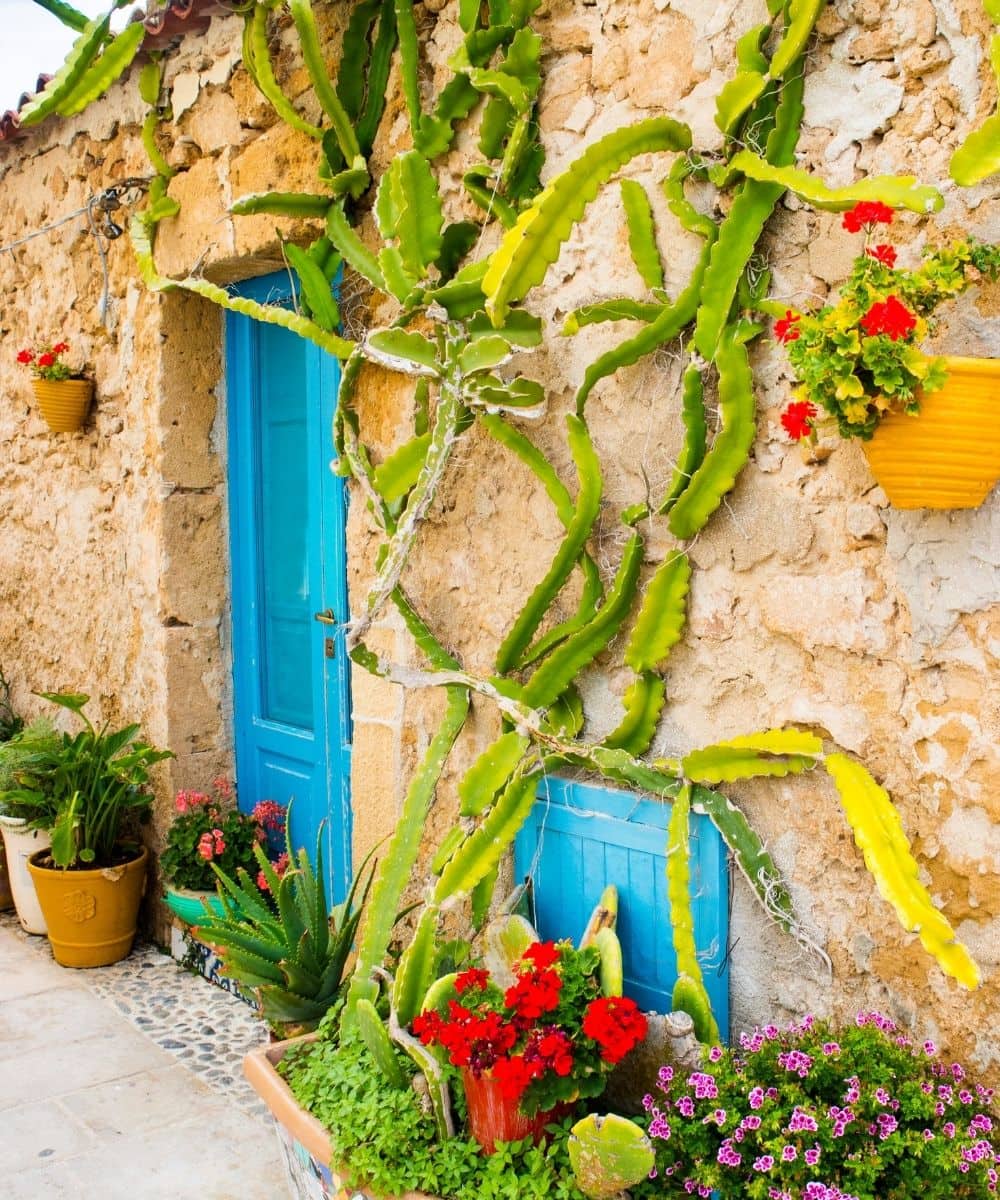 Three baroque cities all included in the UNESCO World Heritage List. Just get lost in the historic centers and alleys to savor the charm of south-eastern Sicily.

Beware of the greedy for sweets!! Modica is also the city of chocolate, obtained with a particular cold processing that keeps the organoleptic properties of cocoa unaltered! Here is also the oldest chocolate shop in the entire region. Not far away, the small village of Marzamemi is also worth a visit, even just to take a photo of the postcard views of the fishing village and taste the local fish products.

On the east coast of Sicily is the city of Syracuse with the fascinating island of Ortigia which forms its historic center. Here you can breathe a fairytale atmosphere, among restaurants, small craft shops, fountains and the ancient acropolis of the Greek city. Among the main attractions, is the Cathedral of the Nativity of Holy Mary, an ancient Greek temple converted, and the  Arethusa Fountain which, according to the myth, houses the body of Arethusa, transformed into a fountain by the goddess Artemis to protect her from the unwanted attention of Alpheus. .

In the modern part of Syracuse, an attraction to visit is the archaeological park of Neapolis with its Roman amphitheater, the Greek theater and the Ear of Dionysus. If you visit in the right season, you can witness Greek tragedies staged in the same theater used by our ancestors!

It is worth visiting the archipelagos that surround Sicily: the Aeolian, Egadi, Pelagie, Pantelleria and Ustica. The Aeolian Islands, the most famous, are located in north-eastern Sicily and include the islands of Lipari, Panarea, Stromboli, Vulcano, Salina, Alicudi and Filicudi. If you love boat trips, it would be ideal to explore them all, perhaps accompanied by those who know the place and know how to organize an all-round experience. 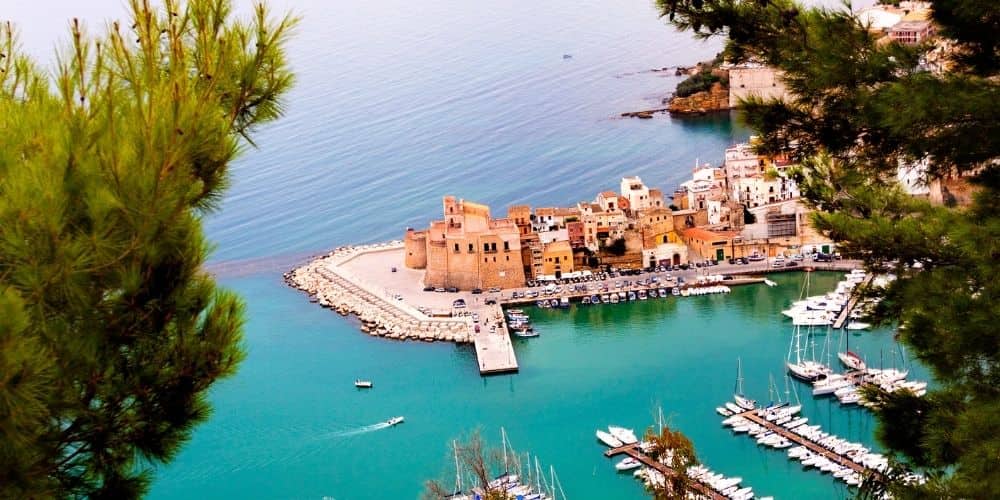 Often used as a base, the city of Trapani was once the heart of the maritime trade routes that linked Carthage to Venice. Churches and squares decorate the village, suitable for relaxing walks. Moving away from the city you arrive at the nature reserve of Saline di Trapani and Paceco, a natural area managed by WWF Italy. Not far away is the medieval village of Erice, protected, according to mythology, by the goddess Venus. Not to be missed is the Castle of Venus, perched on a mountain and surrounded by unspoiled nature. 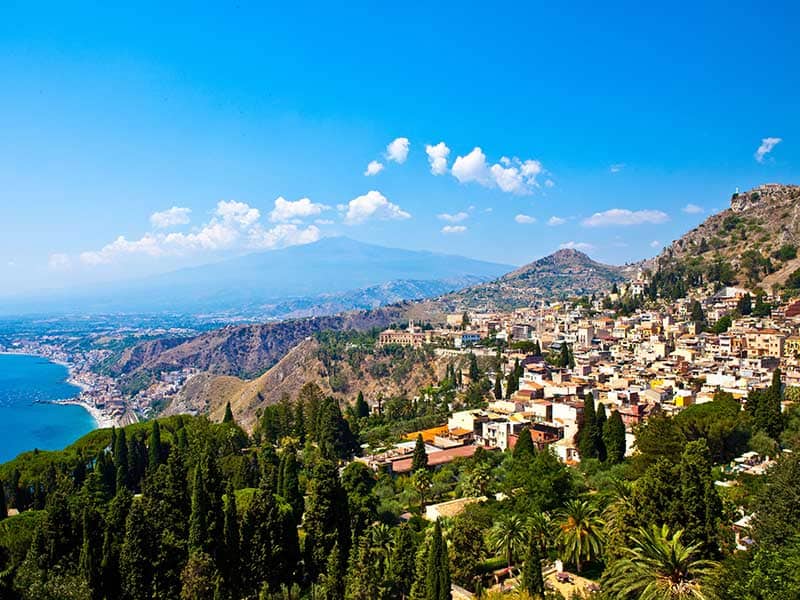 The "pearl of Sicily" has rightfully earned this title. Its extraordinary position on a terrace of Monte Tauro, the nearby beaches and the restaurants that populate the well-kept city center, contribute to making this destination a real rare stone. In short, an unmissable stop, with its Greek Theater and the beautiful historic buildings.

BOOK HERE YOUR ATTRACTIONS IN TAORMINA❯ 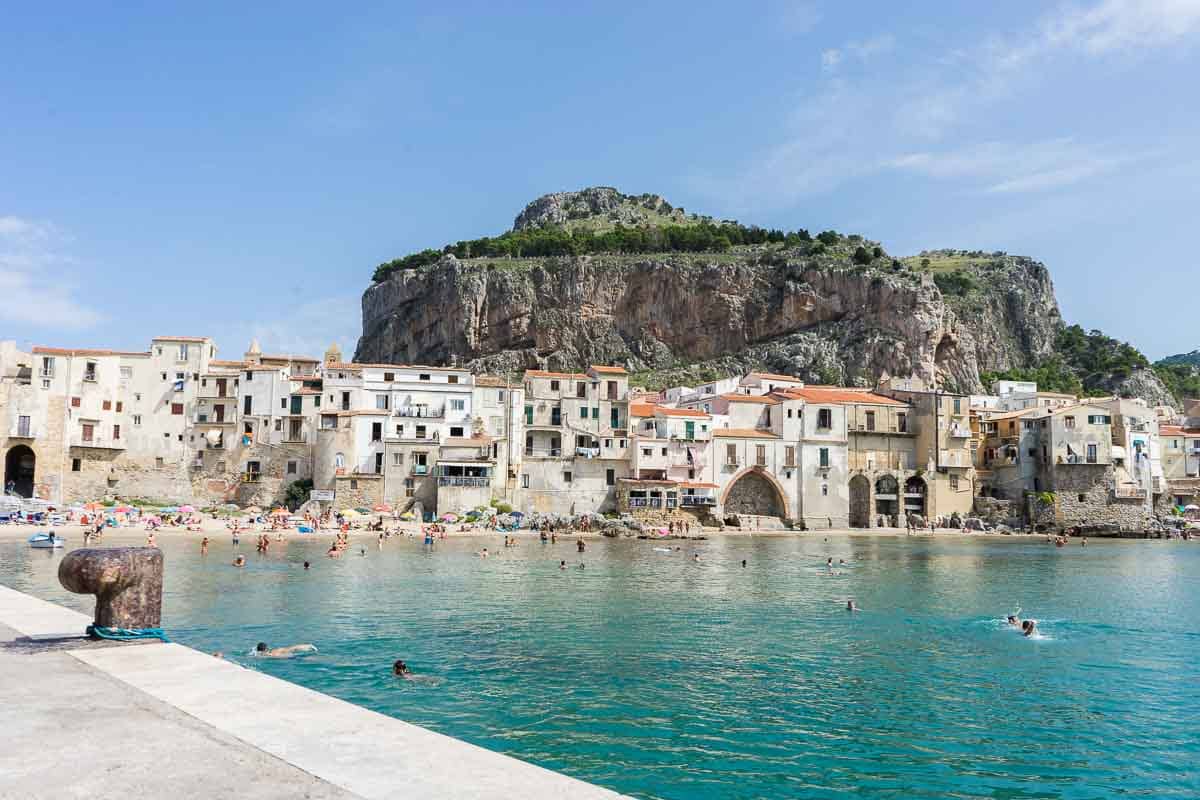 It is a characteristic fishing village along the northern coast of Sicily. The houses are positioned on several levels close to a suggestive beach dominated by a rock. Although it is the atmosphere that captures, the city does not lack cultural attractions not to be missed: the Cathedral, a masterpiece of Arab-Norman architecture; the Salita Saraceno, at the end of which there is a breathtaking panoramic view, and the fortress 270 meters above sea level which dominates the whole landscape.

3. The Valley of the Temples and Scala dei Turchi The Valley of the Temples, near the city of Agrigento, is the most famous archaeological site in Sicily. The valley is populated by 8 temples that can be visited, but the two best preserved are undoubtedly the temple of Concordia and the temple of Hera.

The best time to visit it is at sunset, with the sun's rays creating fascinating plays of light on the ruins.

In the same province, we find a completely different but equally evocative spectacle: the ice-white rock of Scala dei Turchi plunges directly into the deep blue sea, creating a unique and inimitable view.

BOOK HERE YOUR TOUR INTHE VALLEY OF THE TEMPLES ❯

Impossible to miss a trip to the island's volcano: Etna. The imposing mountain is visible from various viewpoints located between Catania and Taormina, but it is even more exciting to climb directly to the top to see its huge crater up close. The best thing to do is to opt for a one-day or half-day excursion, equipped with suitable shoes and equipment. The route with expert guides who will lead you into the barren nature of the volcanic territory is recommended.

At the foot of the volcano, moreover, it is possible to visit Catania, the second largest city in Sicily after Palermo. Nicknamed the black city for its buildings built in lava stone, Catania enchants with its numerous squares and architectural beauties.

Let’s start from the North-West, from Palermo, the regional capital. It is also the liveliest city on the island. Populated by Baroque and Rococo buildings and picturesque local markets, it includes numerous attractions such as the Cathedral, the Teatro Massimo, the historic markets of Ballarò, Il Capo and the Vucciria, the Norman Palace and the Martorana Church.

Not far away, Monreale with its Cathedral. It is an architectural masterpiece of extraordinary beauty and historical importance. One of the highest artistic manifestations of the Norman period and of the italian Middle Ages. Famous for its wonderful Byzantine mosaics (compared to those of Hagia Sophia in Istanbul), it captures the visitor at first glance, surrounding him with the shining gold of its decorations.

BOOK HERE YOUR ATTRACTIONS IN PALERMO❯ 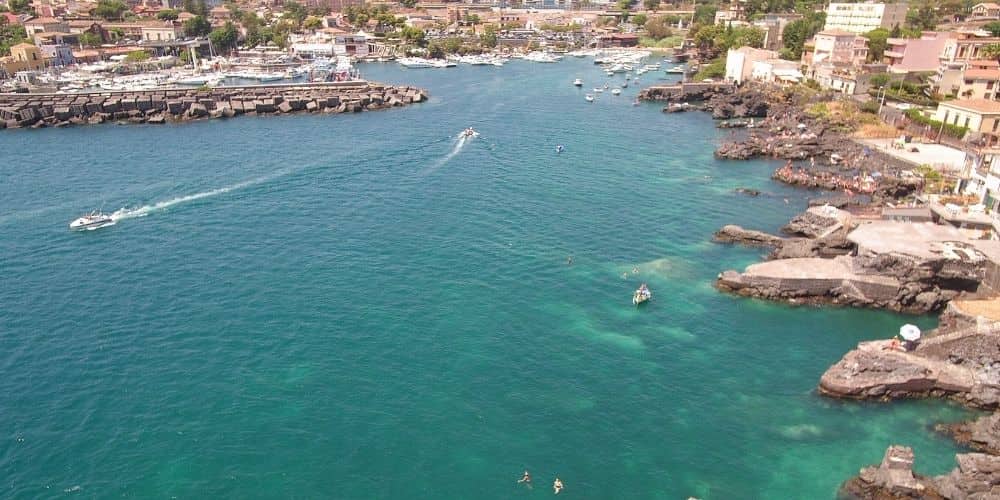 What better way to visit the island if not accompanied by those who, with passion, transmit the love for these places every day? Sciality Viaggi welcomes you to this land to be explored and accompanies you on your journey assisting you in your every need. From olfactory and gastronomic experiences to a real experiential tourism, organize the trip tailored for you, holding you by the hand among the citrus groves of Sicily towards the blue of its sea.