What to do in Trentino Alto Adige: 10 unmissable places

The must-visit list of Trentino Alto Adige can never be exhaustive. The natural and artistic beauties are endless. Below, we have selected 10 of the unmissable places in this spectacular region.

Trento has Roman origins, of which it preserves evidence in its subsoil. It has a particular history, made of clashes for its dominance. The city was the focus of conflicts during the difficult years that led to the Unification of Italy and the First World War. Today, Trento is a city rich in historical testimonies and keeps breathtaking natural beauty.

The Cathedral of Saint Virgil overlooks the main square of Trento and is dedicated to the patron saint of the city. Over the centuries, the structure has undergone numerous modifications and additions. Today, it is a building in which Gothic and Baroque elements harmonize perfectly. From 1545 to 1563, the Cathedral hosted the Council of Trento, convened by the Catholic Church to react to the spread of the Protestant Reformation in Europe.

The Castle of Buonconsiglio

Together with other buildings, the Castle of Buonconsiglio is one of the most important museums in Trentino Alto Adige. It keeps rich collections of artworks related to Trento culture and art history.

Mount Bondone, easily accessible from Trento, is dotted with many beautiful trails surrounded by alpine nature. From here, you can admire evocative views, such as the three peaks of Cornet, Dos d'Abramo and Cima Verde. The Mount also has a rich offer of activities to do, both in winter and in summer. Ski slopes, ice-skating rinks, mountain biking and walking tours, horseback riding, paragliding, hang-gliding: there is something to suit everybody's fancy!

8. A trip to Brenta Dolomites, province of Trento

Included in the Adamello-BrentaPark, the Brenta Dolomites are the only Dolomite group located west of the Adige River. Here, you will find enchanted places where silence becomes music. Not surprisingly, the Brenta Dolomites are often chosen as the setting for I Suoni delle Dolomiti (The Sounds of the Dolomites), the high altitude music festival that gathers musicians performances immersed in the majestic natural landscape every summer. The echo of silence marries with the music giving a highly evocative experience. We also advise you to see the majestic Lake Tovel, where the crystal clear water reflects the magnificent smooth walls of dolomite rock, typical of the place. In addition, the lake is a popular destination for skiers, mountaineers and hikers. Finally, among the main tourist resorts in the area, we recommend visiting the delightful Madonna di Campiglio, a village where you will find an infinity of hiking trails. Among the most popular, we recommend the itinerary at low altitude towards the beautiful Vallesinella Waterfalls. Suitable for families and children, the path is immersed in the intense green of the woods of the Adamello-Brenta Nature Park.

7. Discovering the secrets of Val di Fassa, province of Trento

Val di Fassa is one of the most characteristic valleys of the Dolomites. It houses numerous natural terraces from where you can admire the spectacular alpenglow, a natural phenomenon due to the chemical constitution of the Dolomites (mainly magnesium and calcium carbonate), which makes the rock walls particularly capable of reflecting the sunlight. The peaks of the Dolomites turn pink, orange and purple at every sunset and sunrise. We suggest reaching the Sass Pordoi Viewpoint (around the Pordoi Pass) to enjoy this stunning chromatic show. Here, you will find the famous 2950 meters high Terrace of the Dolomites. You will feel you can touch the sky!

The spectacular view keeps an unsettling geomorphological history related to the territory. Sass Pordoi was once the bottom of a primordial ocean. The landscape, then, changed thousands of years ago: the gigantic sea has retreated and has left the indelible marks of its passage on the rocky walls.

The legend of King Laurin

Val di Fassa is particularly linked to ancient fairy tales and legends. Among the most famous about the Dolomites, it is worth knowing King Laurin's tale. The story would reveal the reason why the enchanting phenomenon of coloured peaks is repeated at each sunset. According to the legend, Laurin was the ruler of a dwarf population living on Mount Rosengarten and kept a beautiful rose garden of which he was very jealous. One day, the king fell in love with Princess Simile and kidnapped her with the help of a cloak of invisibility that he possessed among his treasures. When the princess betrothed destroyed the rose garden, King Laurin tried to face him but was imprisoned. Enraged by his unjust fate, King Laurin cursed his beloved garden: he turned it into stone so that no one could ever admire it, neither day nor night. However, Laurin did not take into account the dusk. So, since then, the so-called pale mountains are tinged with a magnificent rose at each sunset.

6. Moena and the green tourism 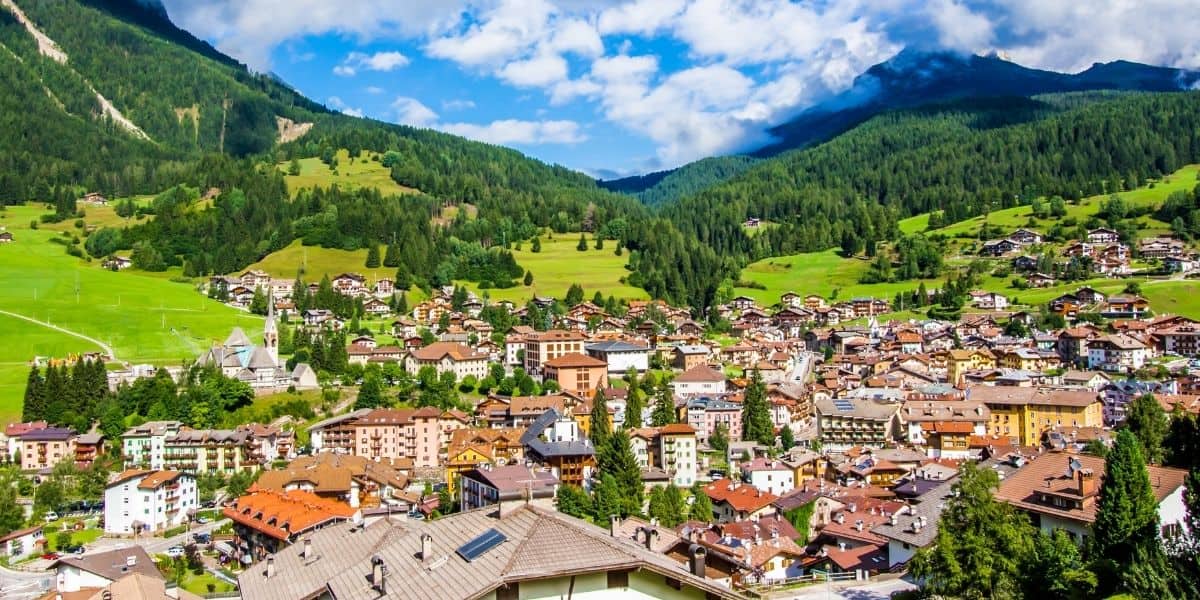 Moena is the largest town in Val di Fassa and is known worldwide as the Fairy of the Dolomites, a name emphasizing the charm of its landscape. Recently, Moena has become a Perla Alpina (Alpine Pearl), an association founded by alpine resorts to promote sustainable tourism. The village is very classy, and here you can do trendy shopping among the most refined shops. In winter, the snowy town transports you into an almost enchanted atmosphere. On the other hand, the village is the perfect place for long summer walks in nature, both on foot and by bike. 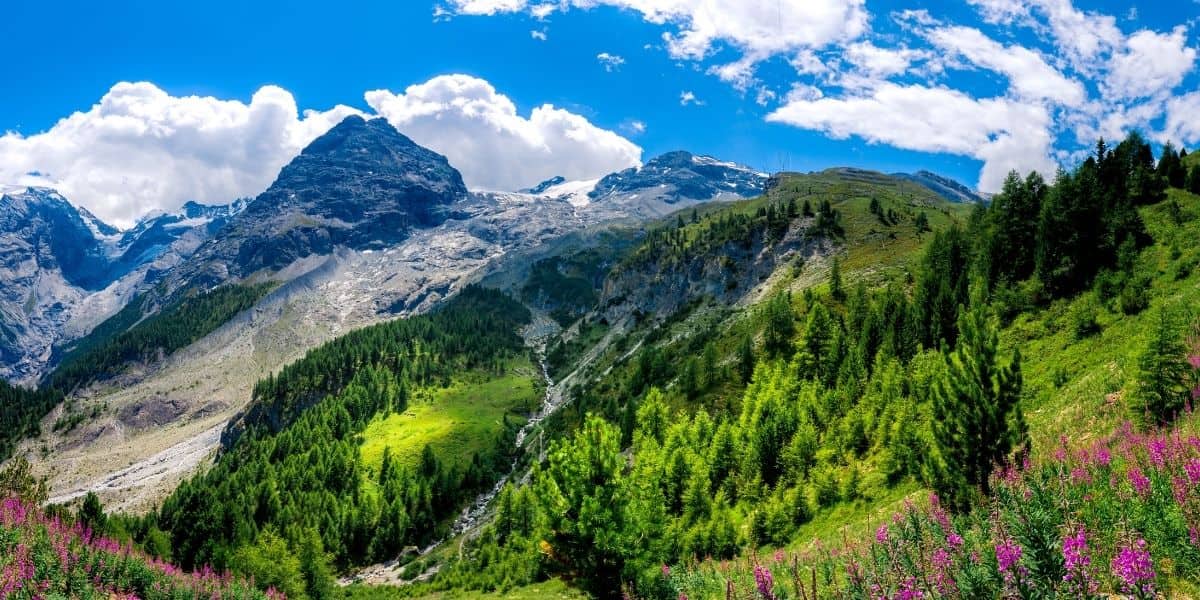 Val di Rabbi is one of the most majestic alpine valleys in Trentino. Partially included in the magnificent Stelvio Natural Park, the Val di Rabbi reflects exactly a mountain valley as it is in a common imagination: rich in dense forests, streams of freshwater, small villages, wooden chalets, immense green meadows. Among the activities to do here, we recommend:

• a walk through the beautiful path of Valorz, a corner of green paradise;

• visit the Venetian Sawmill, an extraordinary work of mechanical engineering that exploits the power of water to cut plants. Among the prerogatives of the Val di Rabbi, there is undoubtedly the wealth of natural water sources;

• cross the suspended Tibetan Bridge over the Ragaiolo torrent. The bridge inaugurated in 2016 is about 100 meters long and 60 meters high. Crossing it is an experience full of charm and adrenaline, both for adults and children. 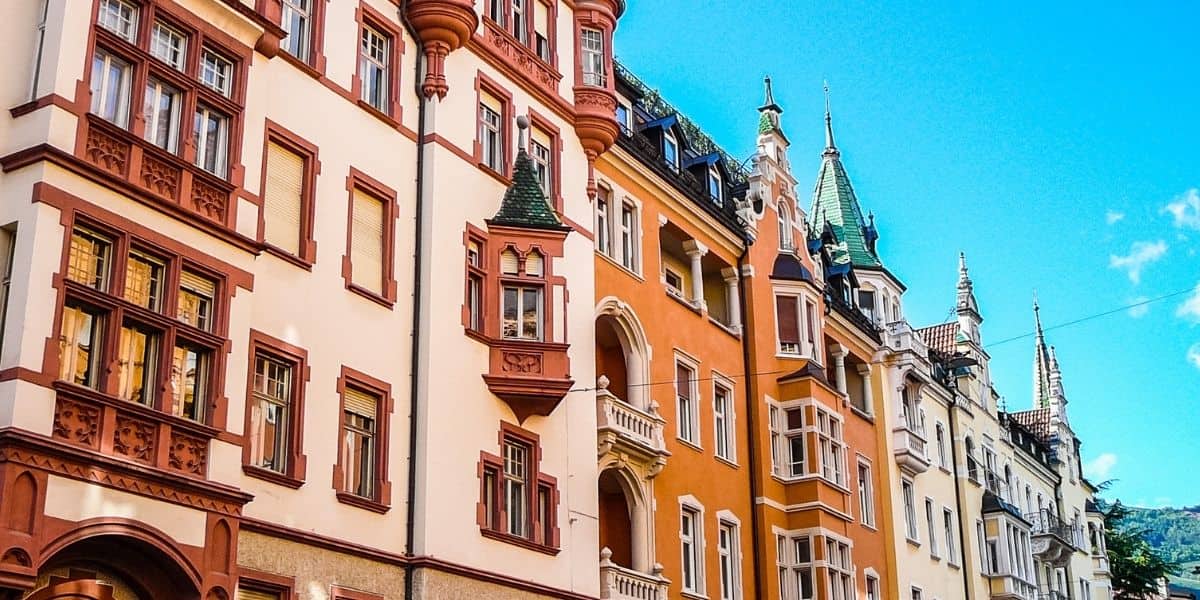 Bolzano is located in the far north of Italy, on the border with Switzerland and Austria. It is rich in historical buildings, churches, monuments and the castles that dot it. Its medieval arcades are the real living room of the city where you can have a break after a long shopping walk among the most beautiful shops in the town.

The Bolzano Cathedral overlooks Piazza Walther and dominates it with its particular green and gold roof. The structure was finished in the fifteenth century, but it has much older origins. It is built on three overlapping churches, dating back to different historical periods. The exterior facade is made of red and yellow marble. Inside, the fascinating Gothic pulpit will amaze you. In addition, the cathedral houses part of the original frescoes of Giotto’s workshop.

Castel Firmiano rises in a panoramic position, perched on a rock that dominates the entire Bolzano. However, the Castle now retains very little of the ancient original structure, dating back to the year 1000. The Cathedral has a remarkable historical value: it was from here that, in 1957, the South Tyroleans raised their protests to reclaim autonomy from the city of Trento.

On a pleasant hike from the city centre, you can reach the pretty Rencio district of Bolzano, surrounded by a beautiful landscape full of vineyards. The Rencio represents the heart of the wine area of Bolzano: from here start the major productions of local wines, such as red La Schiava.

3. A bike tour around the Lake Carezza, province of Bolzano

The Carezza Lake is located in Val d'Ega, about 25 km from Bolzano. The surroundings of the lake are easily practicable for both walking and cycling. The beauty of the place will captivate you: it is surrounded by a forest of spruce and white firs, which frame the alpine lake like a picture. Given the spectacular colours of the place, the expanse of water is known as the Rainbow Lake. This denomination, however, is also linked to a legend. It is said that a beautiful mermaid inhabited the lake. A sorcerer fell in love with her and created a rainbow to attract her to him, but the siren was frightened and took refuge in the deep turquoise lake waters. The enraged sorcerer destroyed the rainbow and threw the pieces into the lagoon. Today, the statue of the mermaid Ondina stands in the middle of the lake in memory of this legend.

In Bressanone, in the province of Bolzano, tasting a good grappa

Bressanone is located in the Isarco Valley, in the heart of South Tyrol. The town is famous for the imposing Baroque Cathedral and the characteristic medieval arcades that cross the historic centre. The surrounding landscape is rich in orchards, vineyards and chestnut groves surrounded by a spectacular natural landscape. Bressanone is a versatile municipality: here, you can choose among a wide range of cultural proposals and various outdoor activities to relax and enjoy the healthy mountain area.
A must for anyone visiting Bressanone is the Novacella Abbey, which, as well as being a place with great historical charm, is the ideal place to taste a good grappa and excellent wine.

1. Knowing the story about Lake Resia and the bell tower Curon (province of Bolzano)

The majestic Resia Lake is located in Val Venosta, near the Resia Pass, located in the western part of South Tyrol. Its emblem, now a major tourist attraction, is the bell tower that rises in the middle of the lake. The Resia Pass was first composed of three natural lakes. The large dam created around the end of the 1940s joined two of them and submerged the small village of Curon Venosta, leaving the bell tower rising from the water. According to the legend, you can still hear the bells ringing from the bottom of the lake on some days. However, in addition to this picturesque attraction, the lake also offers the opportunity to practice sports along its shore, including running, nordic walking and bike ride. Also, you can practise water sports, including kitesurfing and sailing sleigh in the winter months.