Verona, a Unesco city for lovers

Verona, the provincial capital of Veneto, is often called a city for lovers. Shakespeare set right here his masterpiece "Romeo and Juliet" and there are hundreds of couples who every day queue to visit the famous balcony from which the author took inspiration. But Verona actually has other attractions that can make you fall in love and that classify it as a UNESCO World Heritage Site.

Verona, founded already in pre-Roman times probably by Veneti (ancient Italic people), is an incredible concentrate of history! Just walk through its streets to fall madly in love with it. The monuments, the variety of the architecture, the art and the many squares are an incomparable “background” to countless clubs, taverns and typical places with a welcoming and traditional mood. Among the unmissable places are the Cathedral and the Basilica of Saint Zeno, in splendid Romanesque style. And then the Scaliger Arches, a funerary complex of the 14th century intended for some exponents of Della Scala family, among the most significant examples of Gothic art. While among the civil architecture stands the Palazzo della Ragione with its Lamberti tower. But the most beautiful view of Verona is perhaps from the outside of the old town, coming from the bridge that connects directly to Castelvecchio, by crossing the Adige river. The Arena of Verona is certainly the most famous and well-known monument, which has become a symbol of the city itself. It testifies to the magnificence of Verona in Roman times, of which many other testimonies remain. It is an amphitheater of the 1st century AD, second in importance in Italy only to the Colosseum of Rome. Since the century ‘500 it has been subjected to continuous restoration, which have guaranteed the excellent state of conservation in which it is presented. There is not much evidence of the ancient events that took place there, but it seems that the amphitheater remained in operation for much of the Middle Ages. Anyway, today the Arena of Verona is one of the most important and frequented stages for musical and theatrical (as well as sports) events in the whole world. It has been a step for the greatest artists of all time, from Frank Sinatra to Pink Floyd, from Bob Dylan to Paul Mccartney and hosts continuously events of international importance. When there are no scheduled concerts, it is worth to enter for a visit and admire it in its fascinating archaeological aspect. 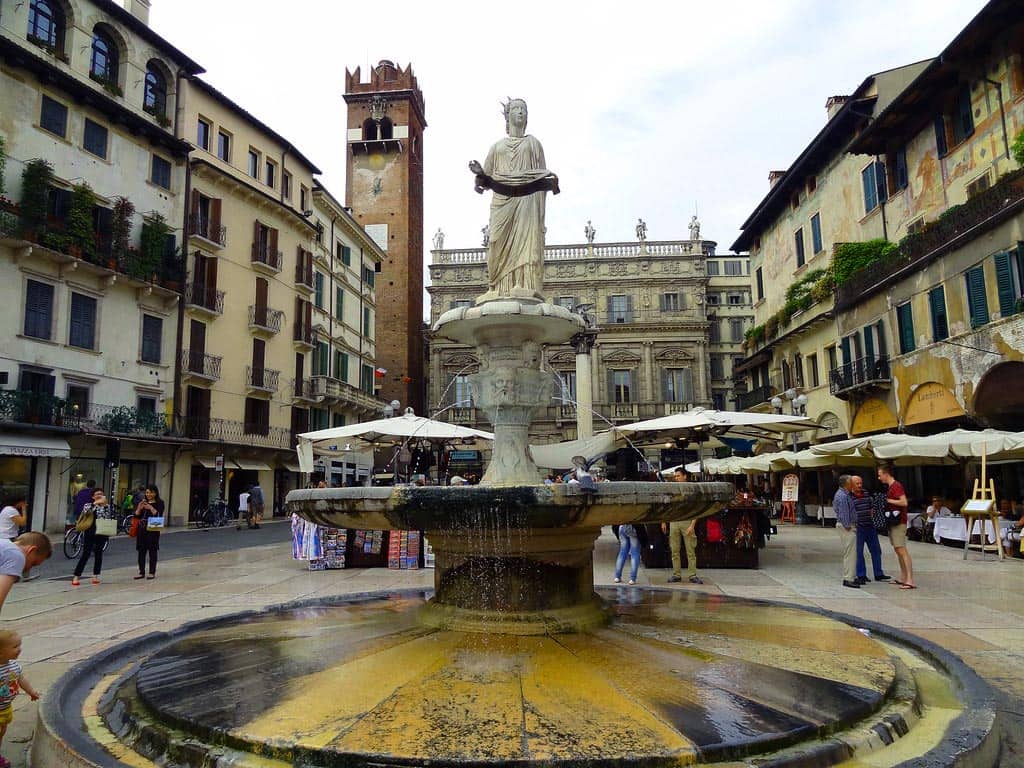 Piazza delle Erbe (herbal square) is the main square of Verona and is also the oldest in the city. It rises directly on the ancient Roman Forum, of which it conserves the plan, even if most of the current buildings are from the Middle Ages. To characterize the layout of the square there are the house of the Judges, Palazzo Maffei and the houses of the Mazzanti, terraced buildings with beautiful frescoes in the facade, on the north and west sides. On the south side is the Merchant’s House. At the center of the square is Madonna Verona, a 14th-century fountain surmounted by the statue of a Holy Lady. It is the most ancient monument of Piazza delle Erbe, together with the Capitello, that is a marble canopy, not far away. The name of the Square obviously comes from the market that was held historically, as it happens for many squares in Italy. It remains that ancient charm that really makes it an enchanted place, where you can immerse yourself. It is not by chance that it is one of the most loved Italian squares in the world. 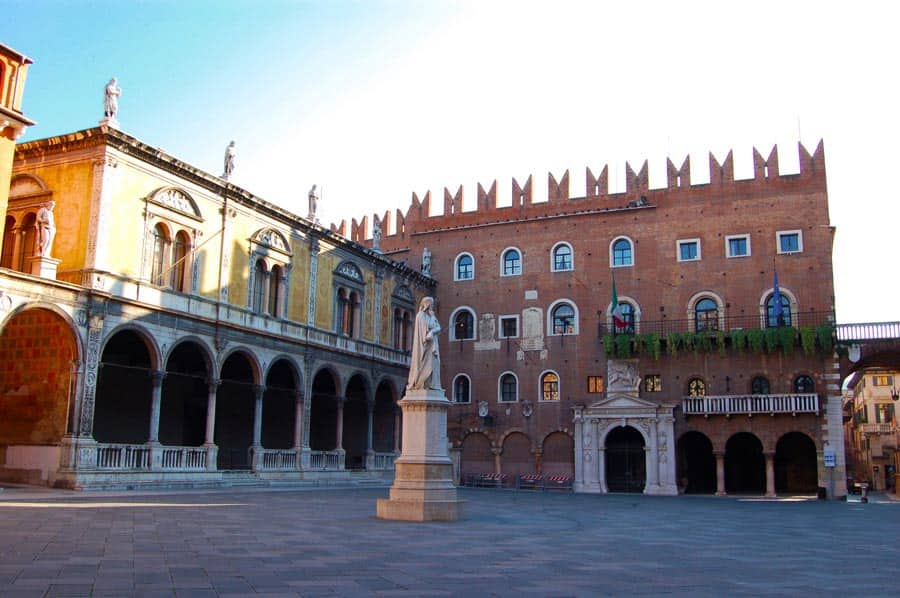 Immediately to the east of that of the Herbs there is Piazza dei Signori (Lords Square), separated from the first one by the Palazzo della Ragione (Reason Palace). Together they form the beating heart of Verona. Piazza dei Signori is also a unique concentration of art and architecture. Here there are two other important palaces: the Palazzo del Podestà, built by the Scaligeri, next to the Church of Santa Maria Antica; and the Palazzo di Casignorio, another member of the Della Scala family, which in this place expressed their prestige. Then there is the Loggia del Consiglio, a meeting place wanted by the City of Verona itself. It is also called Loggia di Fra' Giocondo, for the presence of a relief depicting a friar traditionally identified as Friar Giovanni Giocondo from Verona. In the middle of the square there is also a beautiful statue dedicated to Dante Alighieri, who stayed for a period in a palace of the square. It was erected in 1865 in occasion of the 600 years since the birth of the poet. For this reason Dei Signori Square is also known as Dante Square. 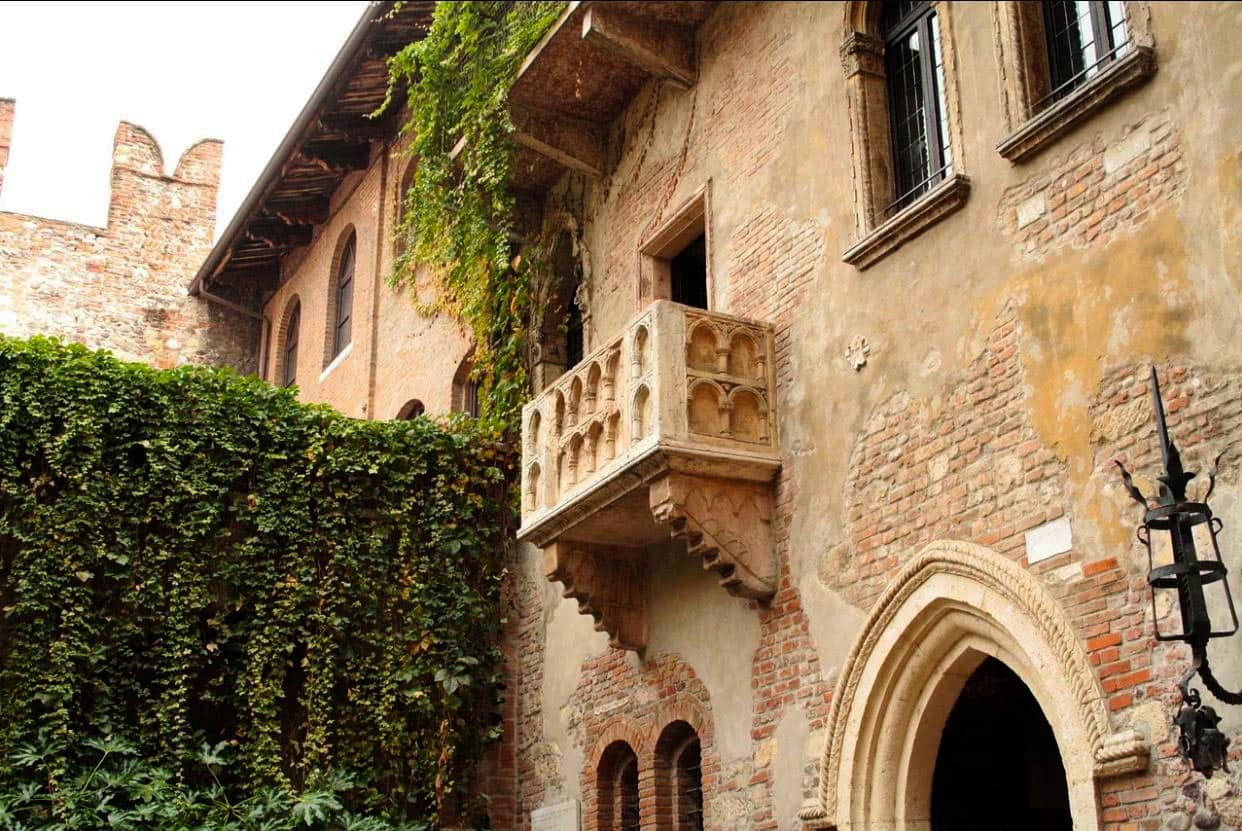 Verona has been included in the UNESCO World Heritage List since 2000. It is specifically aknowledged for the integrity and authenticity of its historical structures. The criteria with which the recognition took place are the 2nd and the 4th, that are the architectural and artistic development of a cultural area and the representation of a typology of architecture particularly important in human history. Specifically, UNESCO describes Verona as an “outstanding example of a town that has developed progressively and uninterruptedly over 2,000 years, incorporating artistic elements of the highest quality from each succeeding period”, and it “also represents in an exceptional way the concept of the fortified town at several seminal stages of European history”.