Football in Italy: a journey through the history of the most famous sport in the world

The football game is part of the life of every Italian, often becoming a natural religion. Don't you believe it?

Since its creation, football has had great success, both for the simplicity of its rules and the show it manages to offer.

In Italy, it has become a genuine faith with fans born with the myth of football. Italian teams, including the national team, have always distinguished themselves worldwide, winning trophies in every competition. Italian football has a very long history, made up of great triumphs and epic defeats. Scroll down a few lines, and let's retrace them together.

Some people think football is a matter of life and death. I assure you, it's much more serious than that.

The origins of football in Italy

There are historical references that tell about games very similar to football already in the times of the Greeks and Romans, as well as during the Florentine Renaissance, in which there was even a game called "the game of football", modern football history in Italy is at the end of the 19th century. Genoa's oldest Italian team, founded on 7 September 1893, followed by Alexandria in 1896, Juventus in 1897 and Milan in 1899.

The Thirties: the first decade of Italian glory

The thirties are the years of the first great glory for Italian football. Today's Serie A was born in these years, won for the first time by Giuseppe Meazza's Inter.

The Thirties marked the golden age of Italy, which was led by Vittorio Pozzo on the bench and Inter's scorer, Giuseppe Meazza, won its first official international trophies. The first title came in 1934 as hosts in the final against Czechoslovakia in overtime 2-1. In 1935, Italy won the international cup against Austria, also defeated in 1936, which delivered Olympic gold in Nazi Berlin.

In 1938 Italy won its second world title in France by beating Hungary 4-2 with a brace from another great protagonist of Italian football: Silvio Piola.

After Juventus' golden five-year period in Italy came the rise of Bologna, which was also the first Italian team to win internationally. In 1932 and 1934, Bologna won the Central European Cup, the oldest European club football competition.

The Sixties: the triumphs of the Italian teams

Gianni Rivera at Milan in 1969

The 1960s collect the legacy of Grande Torino, Gianni Agnelli's Juventus and AC Milan of the Scandinavian trio Gre-No-Li, Gunnar Gren, Gunnar Nordahl and Nils Liedholm. However, the decade was marked by the beginning of the epic of the "Grande Inter", trained by Helenio Herrera, which, in a few years, won 4 league titles and two times the European Cup against Real Madrid and Benfica and was crowned World Champion twice.
But Inter were not the first team to win the European Cup; Nereo Rocco's Milan won their first European Cup by beating Eusebio's Benfica in London, becoming the first Italian club to win the competition.

Milan also brought Italy the first Italian Golden Ball, Gianni Rivera, who with a scudetto won, a second European Cup won in Madrid against Ajax and, for the first time, victories in the European Cup. Cups, against Hamburg and the Intercontinental Cup became the best footballer in 1969.
In 1968, led by Ferruccio Valcareggi, the Italian national football team returned to the top of football with the victory of the European championship, played at home. The final against Yugoslavia was played twice. It ended in a draw the first time, leading to a repeat two days later. The second match was won by Italy 2-0, with goals from Gigi Riva and Pietro Anastasi, winning the first European title in our history.

The Eighties: the most beautiful championship in the world

The 1980s brought Italy back to the top of the world. In 1982, in Spain, the national team led by Enzo Bearzot won the world title for the third time.

Italy won 3-1 against West Germany, with the goals of Paolo Rossi, Marco Tardelli and Alessandro Altobelli. This victory in Madrid sanctioned the rebirth of Italian football and especially of Serie A, which was declared the most beautiful championship in the world.

Those were the years of the greatest footballers in the world who played in Italian teams. In those years, Michel Platini played in Juventus, competing for the title with Falcao and Bruno Conti's Roma, in record-breaking Inter the German Karl-Heinz Rummenigge, in Fiorentina Socrates and Daniel Passarella. At the end of the decade, the Dutch of the Milan with the trio Ruud Gullit, Frank Rijkaard and Marco Van Basten faced the Napoli of the "pibe de Oro" Diego Armando Maradona.

These last two realities have brought Italian football to its top. Napoli has won their only two league titles and a UEFA Cup, thanks to the strongest footballer in football history, Diego Armando Maradona. Instead, Milan, coached by Arrigo Sacchi and led on the pitch by the Dutch trio, has won any trophy it could win, becoming, according to everyone, the best team of the century.

The Nineties: Italy of the Seven Sisters

The 1990 world championship inaugurated the nineties. The world championship of 'magic nights' was played in Italy but won by West Germany, with the Azzurri third. The Italian clubs won all the official international trophies in the same year. Arrigo Sacchi's AC Milan took home the European Cup, the UEFA Super Cup and the Intercontinental Cup; Sampdoria won the Winners' Cup, while Juventus won the UEFA Cup.

In recent years, Italian football has always excelled in Europe, and in 1993 Juventus brought the new Champions League to Italy with Roberto Baggio. He won the third Italian Golden Ball after Gianni Rivera and Paolo Rossi.

Also, in this decade, Milan dominated in Italy, especially in Europe, with Fabio Capello. The latter took over from Arrigo Sacchi and once again won everything, defeating the opponents and creating the myth of the invincibles of Milan.

Even the Italian national team continues its triumphal path even if it has to surrender in the final on penalties against Brazil with the iconic missed penalty by Roberto Baggio in the USA '94 World Cup.

In the second half of the nineties, the myth of the seven sisters was born i.d. Fiorentina, Inter, Juventus, Lazio, Milan, Parma and Rome, who competed for dominance at the helm of Italian football. Especially in Europe, Juventus of Alessandro Del Piero and Zinedine Zidane played in three consecutive Champions League finals and won only the 1997 one.

In recent years, Serie A will host many champions such as Ronaldo at Inter, Batistuta at Fiorentina, Crespo at Parma and Maldini at Milan and many others. 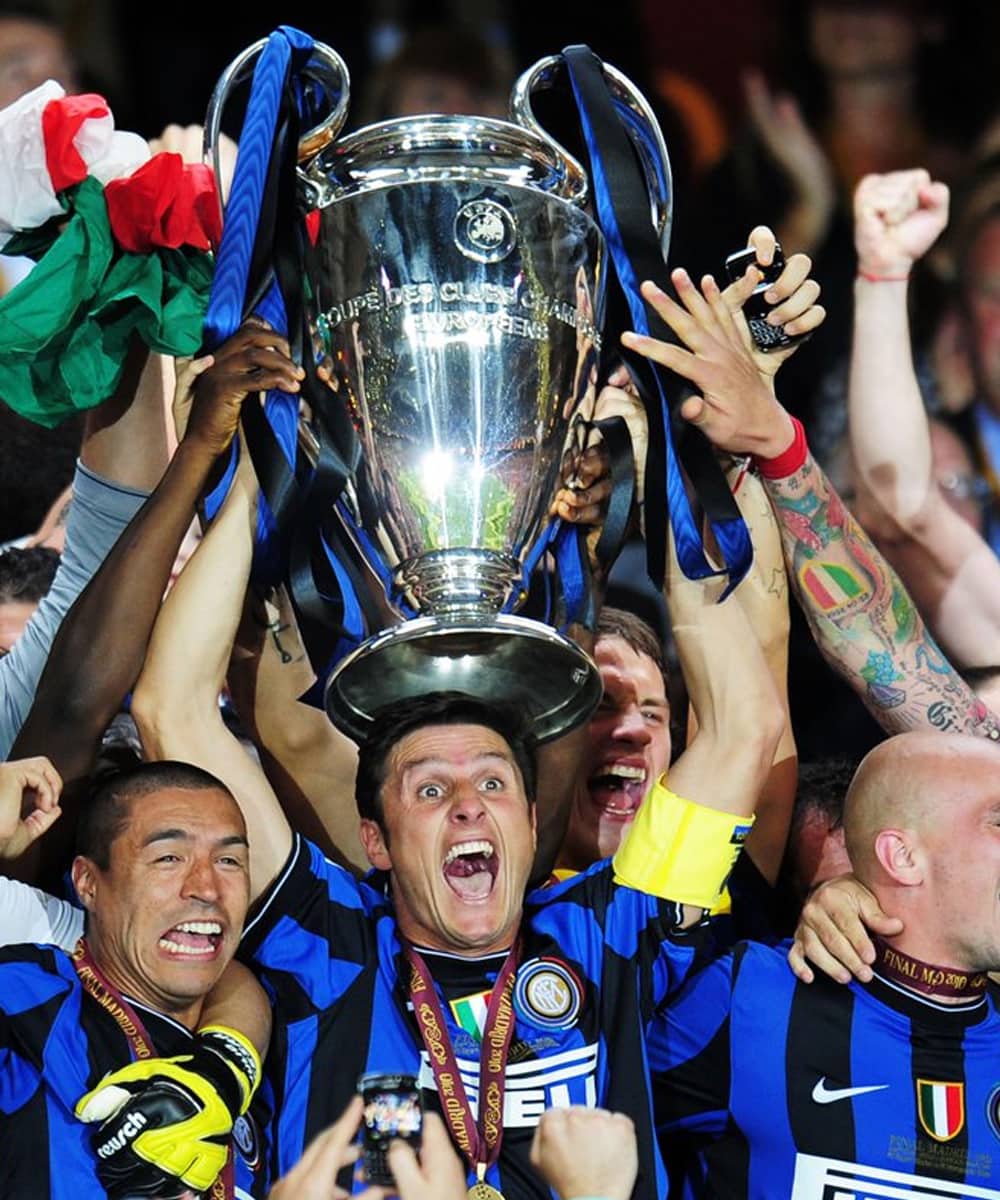 The new millennium saw Rome on the roof of Italy with Cragnotti's Lazio and Totti's Rome. They fought for the title of Italian Champion on several occasions before giving way back to the duel between Juventus and Milan. In the only all-Italian Champions League final, he also returned to Europe, won by the Rossoneri.

In recent years, Italian football has lived on the glories of the past. It brings two more golden balls to Serie A with Pavel Nedved at Juventus and Andriy Shevchenko at Milan, who fuel the duel between Milan and Juventus.

Italian football experienced the tragedy of calciopoli that brought Juventus to Serie B and sanctioned the return of another great Italian: Moratti's Inter. They, after dark years, won the championship three times in a row. At the same time, Kaká's Milan also he Ballon d'Or, in 2007 he won his seventh and, so far, the last UEFA Champions League, against Liverpool, the UEFA Super Cup and, for the first time for an Italian club, the FIFA Club World Cup, becoming for a few years the most successful club in the world.

The 2000s ended again with Josè Mourinho's Inter, who in 2010 won the first triplete in the history of Italian football (UEFA Champions League, Championship and Italian Cup).

In these years, the national team achieved excellent results. Dino Zoff's expedition of the national team, at EURO2000, reaches the final against France, where they had been in the lead but lost with Trezeguet's golden goal in the last extra time.

In 2004 Claudio Gentile's Olympic football team brought Italy back to the Olympic podium with the bronze medal.

But the pinnacle of these years for Italian football was the conquest of the fourth world title in 2006 in Germany. A triumphal path that saw the Italians, led by Marcello Lippi, and the best Italian players of the last 20 years, beat two historical opponents such as Germany in the semifinals and France in the final on penalties with Fabio Grosso's decisive football. In December of the same year, the Italian captain, Fabio Cannavaro, won the Golden Ball and the FIFA World Player.

The 10's of 2000: Italian football enters in the alpha generation

The '10s were marked by the undisputed domination of Juventus, guided again by the Agnelli family, who won 9 consecutive league titles from 2012 to 2020. The only team to win besides Juventus was Milan in 2011, with the last title of the epic by Silvio Berlusconi.

Italian football has not experienced great European campaigns in recent years, with only Juventus reaching the Champions League final twice in 2015 and 2017 and Inter losing the UEFA Europa League final against Sevilla in 2020.

In 2018 Serie A returned to welcome one of the greatest footballers in history, Cristiano Ronaldo, from Real Madrid.

The pandemic marked the last championship of the decade due to COVID-19, which forced the tournament to stop for three months. The only other suspended league was 1914-15, interrupted due to the First World War.

The Italian national team did not stand out for victorious but mostly disappointing sporting results in the same years. In the 2010 and 2014 world championships, the Azzurri, led by Marcello Lippi and Cesare Prandelli, did not pass the initial phase in very affordable groups. The only final played is Euro 2012, with the Azzurri defeated by the Spanish Red Furies with a 0-4 result.

The Twenties of 2000: the year of Italian sport

Italy raises the European Championship in 2021

The 1920s saw the end of Juventus' Serie A victories to the advantage of Inter. The Nerazzurri were guided to the conquest of the title by the former Juventus player Antonio Conte. For the first time in history, the triumph of Inter marked the victory of Serie A by a foreign owner.

The Italian national team has returned to winning also at the continental level after 53 years from the last triumph. The Azzurri, coached by Roberto Mancini, won Euro 2020 (postponed to 2021), the first travelling European, facing the hosts of England in the final at Wembley stadium and beating them on penalties with an outstanding performance by Gianluigi Donnarumma, the best player of the event and best European goalkeeper.

Football in Italy has been one of the most practised sports for more than a century. Indeed, no exponents or clubs have been named in this short historical ex-course that have raised the name of Italy: from Sampdoria in the early nineties to Turin. of the twins of the goal Pulici and Graziani, up to Franco Baresi, Giacinto Facchetti, Gianpiero Boniperti and many others.

There is no other place in the world a man can be happier than in a football stadium.