10 Ideas for celebrating Halloween in Italy

Halloween has also become a regular event in Italy, where there is no shortage of themed proposals. Some criticise it and those who love it. But there have always been traditions linked to the Day of the Dead (the 2nd of November) in Italy...

Halloween in Italy: an export product?

When you say Halloween in Italy, there are still those who turn up their noses because we give space to a product and a holiday that does not belong to us. But are we sure of this?

We all know that it's an American holiday with an Irish tradition dating back to Celtic times. But there is a good chance that Halloween in Italy existed before the Celts existed in prehistoric times.

Some experts in folk traditions claim that Halloween already existed in Italy but under a different name. It was an ancient agro-pastoral festival called Dodekaemeron (12 days). It marked the end of agricultural activities and the beginning of the cold season, which was also the season of the dead—twelve days, straddling the end of October and the beginning of November when they believed that the dead could return to the world of the living.

In addition, there is a little story going around the streets of Little Italy in New York that sees the symbolism of the holiday competing between two products of the earth: the pumpkin and the turnip. Using pumpkins for Halloween was an Italian idea. An Italian emigrant suggested it to Irish emigrants who continued to celebrate by carving turnips: pumpkins were much easier to cut and full of seeds, full of symbolism and representing life reborn after death and the end of the cold season!

That said, does it make sense to celebrate Halloween in Italy? If your answer is yes, here are the "most terrifying" ideas chosen for you by Visit Italy!

In this town we call home, everyone hails to the pumpkin song!

10. In search of monsters in the Park of Bomarzo (Lazio) 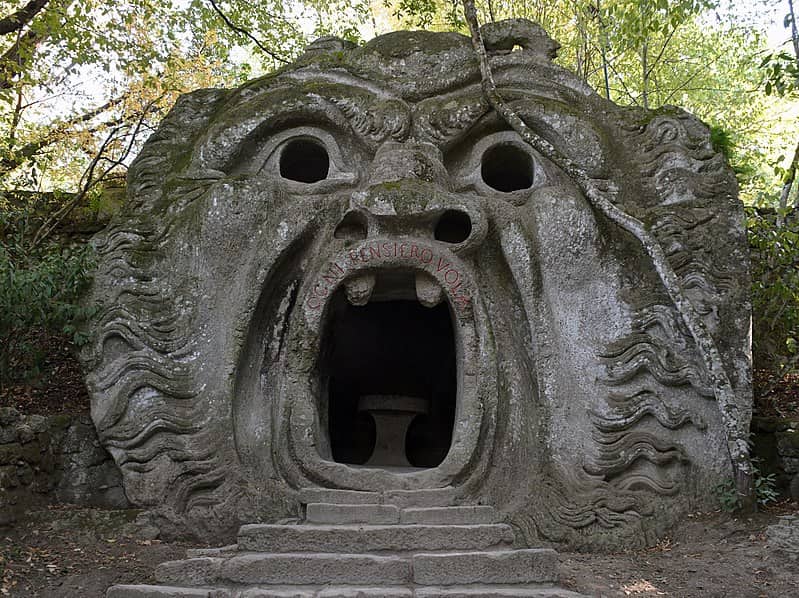 The Park of Bomarzo or Sacred Wood of Bomarzo is a natural park in the province of Viterbo, also known as the Monster Park. Inside there are giant stone sculptures depicting monsters, mythological animals and gods: a path to immerse yourself in magic.

Like a labyrinth unique in the world, in which to try to unravel symbols and mysteries of the park, still unknown today, the perfect idea to celebrate Halloween in Italy with children!

Another perfect place to celebrate Halloween in Italy is the Langhe in Piedmont. This hilly area gives its best in autumn, thanks to the magnificent colours of the vineyards. This period is also charged with a mysterious charm that brings to light ancient legends and beliefs.

In fact, it is said that the Langhe is home to the Masche, the mischievous and vindictive Piedmontese witches who still frighten the local farmers. They are not evil, but it is better not to make them angry!

There are also magnificent castles in the Langhe that are said to be haunted by ghosts. Such is the case of the Castle of the Conti Roero in Monticello d'Alba: it is said that the spirit of Chiara, a young woman in despair at the death of her husband, was killed during the wedding, haunts the castle. A dark guided tour is usually organised here on Halloween evening!

8. Festival of the Witches of Corinaldo (Marche)

Corinaldo is a medieval village full of historical charm and traditions in the hinterland of Ancona. The best-loved Halloween festival in the Marche region happens here: since 1998, La Festa Delle Streghe (The Witches' Festival) has taken place. An event for young and old alike, full of stands and themed attractions, such as the Tower of Transformations and the Tunnel of Fear.

The Miss Witch contest is an event within the event, which elects the Witch of the Third Millennium. Anyone can take part...men included!

In the village of Orsara di Puglia, in Foggia, a sort of "against-Halloween" because it doesn't take place on 31 October but the day and throughout the night of 1 November, All Saints' Day. It is the ancient festival of Fucacoste and Cocce Priatorije (bonfires and heads of purgatory). A peculiar and old custom: the sharing of food in the street by the fire. Each local family organises a bonfire and banquet to share with relatives and friends.

As a representation of the heads of limbo, the centre's streets with hundreds of pumpkins carved to resemble humans and holding candles inside. It is an evocative event. Still, you won't find any witches or monsters asking you to "trick or treat": the Fucacoste are a moment of sharing and remembrance dedicated to the dead.

The suitable alternative for those who don't particularly like Halloween!

6. The descent into the abyss at Pozzo di San Patrizio (Umbria)

In Orvieto, the Pozzo di San Patrizio (St. Patrik's Well) is a very suggestive place dedicated to the famous Irish saint. Built during the Renaissance and, according to legend, represented the descent into the Underworld. At the time of its construction, the name was "Pozzo Della Rocca" (Fortress' Well) because it was part of the fortified fortress of the Albornoz Fortress.

It assumed its current name during the 19th century to symbolise the spiritual journey of the human soul. The legend of the Irish saint says that St Patrick was the guardian of a bottomless cave - the well - where the faithful people believed in the atrocities of the pains of Hell. Only those who managed to reach the bottom, by overcoming a series of adversities, would obtain remission of sins and access to Paradise.

Today the well has lost its primary function and has become one of Orvieto's best attractions. So why not visit on Halloween and strengthen the bond between Italy and Ireland! Scipione Castle, also known as Pallavicino Castle, is a medieval manor house located in the tiny hamlet of Scipione Castello in Salsomaggiore Terme, in the province of Parma.

Every year on the occasion of Halloween Night, a suggestive candlelight tour takes place. A guided tour during which you will discover and meet mysterious characters from the distant Middle Ages: ghosts and light games in time to the music.

The 15th-century prison and the secret door to the Devil's Drawing Room are exceptionally open to the public for the occasion. There will also be decorations with carved pumpkins!

4. The Devil's Bridge in Borgo a Mozzano (Tuscany)

We are in Tuscany, and in Lucca, all comics lovers know for sure that during this weekend takes place the Lucca Comics, the most influential comics fair in Italy and Europe. If the monsters and evil villains of the world of comics and manga are not enough for you and you feel like real Ghostbusters, read on because we have the right idea for you!

Not far from Lucca is Borgo a Mozzano, a small town in the Serchio Valley, the actual Tuscan capital of Halloween. The village is famous for the Devil's Bridge, characterised by asymmetrical arches. Since 1993, the town has hosted Halloween Celebration, a series of themed events culminating on 31 October. Every year the legend of Lucinda, a noblewoman from Lucca who sacrificed her lovers to the devil to be eternally young and beautiful, is relived. There will also be a zombie parade, vampire-themed role-playing games, and many other frightening activities. It is not for children.

Here's a place that seems to have come straight out of Stephen King's pen and that Stranger Things fans will probably love!

We're in Consonno, in Lombardy's Brianza region, and here we find an abandoned and decidedly creepy "non-place": Italy's ghost Las Vegas. An ambitious project that began in the late 1960s to transform a quiet town into a lively, consumer-oriented place, but it never got off the ground because the forces of Mother Nature gutted it several times until the final abandonment.

Consonno today is an absurd collection of abandoned and kitsch buildings: pyramids, pagodas, towers in mock medieval style and the remains of the casino, hotel and funfair that once made it up. The entrance sign still welcomes you with the words, "A Consonno è sempre Festa" (In Consonno is always a party!). A chilling party!

2. Naples: The secrets and mysteries of the underground...and more (Campania) 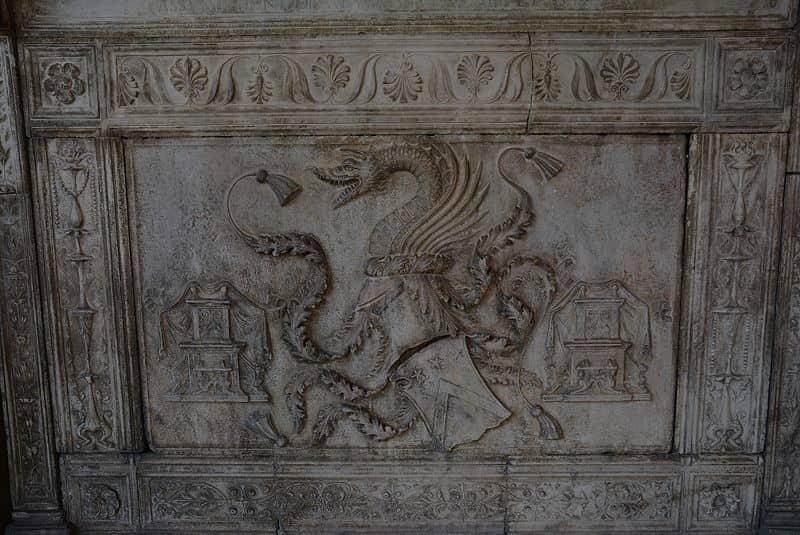 Perhaps it is because of the strong superstition that characterises the Neapolitan people, but Naples is undoubtedly an intensely magical city worth visiting even on Halloween! Witchcraft, haunted places, damp catacombs and deconsecrated necropolises. The city's most occult secrets are waiting to reveal on the scariest night of the year.

Just a visit to the Fontanelle Cemetery with all its skulls ('Capuzzelle') provides the right spooky and mystical atmosphere. And what about its Museo Delle Torture (Naples Torture Museum), the most impressive exhibition of torture instruments in southern Italy.

Discover the beautiful and elegant Posillipo district and go on the trail of its mysteries and ghosts: the palace by the sea and the spirit of Donn'Anna Carafa, Palace of the Spirits at Marechiaro, the cursed villa on the island of Gaiola, etc.

Last but not least, the crypt of the most famous vampire in the world is in Naples: Count Dracula! The tomb is inside the precious Monumental Complex of Santa Maria La Nova, precisely in the Minor Cloister of San Giacomo Della Marca. Moreover, the Irish author Bram Stoker himself lived in Naples in 1875.

1. Venice: Palazzo Dario, the legends of Cannaregio and the Island of Poveglia (Veneto) 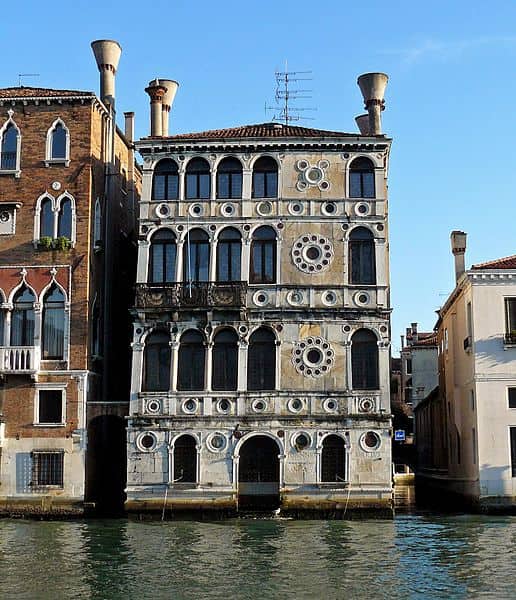 Because of its rich history and unique atmosphere, Venice is probably the Italian city with the most secrets. The Cannaregio district alone hides incredible legends of ghosts and mysterious crime stories waiting to discover.

Also famous is the secret surrounding Ca' Dario, a splendid palace overlooking the Grand Canal with a peculiarity: all its owners and tenants seem destined to die a violent or sudden death. Recent victims include financier Raul Gardini and Who bassist John Entwistle.

Venice hides many other legends and mysteries, like those of the Rialto and Castello areas.

In the Lagoon, there is also the mysterious Poveglia Island, wholly haunted by ghosts (there are even 160,000 souls). During the plague, they left plague victims and corpses on this island. In the 20th century, here built an asylum, where a doctor is said to have tortured and experimented on the patients until he fell to his death from the bell tower window one day. Accident, revenge or the power of the spirits?