Visiting Monza in one day

Monza is a small treasure trove of history and art. Its beauties are concentrated near the characteristic historic center. From the Duomo to the Villa Reale, you can get lost walking through the streets and parks. You walk accompanied by historical figures who have made it great and who have left traces of their deeds in the precious remarks.

A few kilometers from Milan, we find Monza, a treasure trove of art and history that tells the past of this region. The capital of Brianza has a very important past. Its origins date back to the Celtic era, but it was in the Lombard period (seventh century AD) that the city assumed its maximum splendor. In these years, Monza became the most important political and cultural center of the kingdom. Above all thanks to the exploits of Queen Teodolinda who converted the people to Christianity and enriched the city with numerous artistic and architectural beauties.

Currently the visitable center is quite concentrated, it is possible to get around the city walking comfortably and without having to take vehicles. So let's see how to spend an ideal day in Monza. Before visiting in depth the historical attractions of the city, you cannot miss a walk in the characteristic streets of the historic center. The main road is Via Italia which connects the heart of Monza to the center of Milan. Along the way, numerous symbolic buildings of the city with classic Lombard architecture.

Among these, the Arengario is perhaps the most significant. The building stands on three rows of massive arches under which, once, the city market took place. From the portico it is possible to admire one of the many squares of the city, a meeting place for citizens of all ages. A macabre detail: the faces of those sentenced to death were painted on the main facade of the building. On the opposite side is the Parlera, or the balcony from which the mayor of the city issued the provisions of interest to the citizens.

Moving to Piazza Duomo, you can admire the facade of the main church of the city, precisely the Duomo, recently freed from the restoration scaffolding. On the square there is also a Crocicchio dating back to the period of the plague, which allowed the sick to see the cross and pray from inside the house, without having to go to the church.

Another of the main squares of the city is Piazza Trento Trieste with the war memorial in the center. The Town Hall overlooks it. Not far away is the Church of San Maurizio, formerly Santa Margherita, in which it is said that Virginia de Leyva, the Nun of Monza from the famous Manzoni novel (Promessi Sposi) was ordained.

Of particular interest is the Ponte dei Leoni, which bears this name for the four statues of lions found at its corners. Ideal for photos during the walk.

Along the Lambro river, there is an ancient mill which is the seat of the Monza Brianza Ethnological Museum. 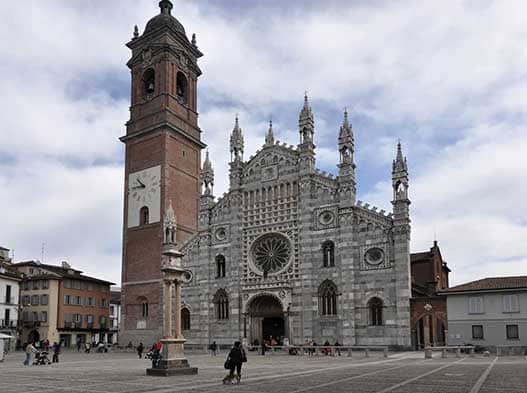 We come to the most important building in the city. The church was erected as a palatine chapel of the royal palace which stood nearby. It was the Queen of the Lombards Teodolinda, wife of King Autari, who wanted it. It was she who wanted the conversion of the Lombard people to the Catholic religion. The deeds of this historical figure are still celebrated by the local population. Every year, at the beginning of July, the city organizes a historical procession that parades in period clothes to the Piazza del Duomo where light shows, dances and historical re-enactments are celebrated.

The treasure of Teodolinda is preserved inside the Cathedral: precious gold dating back to the Lombard period, including the famous iron crown of the queen. Also not to be missed is his private chapel, where 45 episodes of his life and his important deeds are depicted. In the fourteenth century a new facade was erected in Gothic forms, in marble, with horizontal white and green stripes, the work of Matteo da Campione (1396). Next to it is the 80 meters high bell tower, built in 1606 by the architect Ercole Turati.

Royal Palace and Park of the Villa Reale 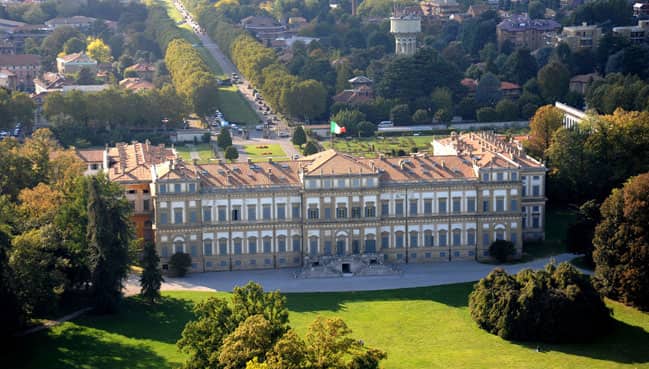 The Reggia di Monza or Villa Reale was built in 1777 by Ferdinand of Habsburg. Subsequently, the villa became the property of the royal family who used it in the summer.

The works were carried out by the architect Piermarini, a pupil of Vanvitelli, who also worked on the construction of the Royal Palace of Caserta and who built the Teatro alla Scala in Milan.

Inside, the royal apartments were furnished during the reign of Queen Margherita and King Umberto I. The reception rooms are perhaps the most majestic. On the upper floor, however, you can access the Belvedere, an exhibition area for temporary exhibitions of design and modern art.

The Reggia di Monza is an example of innovation and progress: just think that it was also the first building with centralized heating systems!

Connected to the Reggia is the Park of the Royal Villa of Monza, built in the Napoleonic period to be the largest urban park in Europe (it still is). It is a huge English garden composed of hills, artificial lakes and wooded areas. Within the huge expanse of green, there is even the Autodromo Nazionale which was built in the 1920s and is now a historic monument in the history of Formula 1.

Monza offers fun and beauties of all kinds that you can visit in a single day, better to set the alarm early in the morning to be able to enjoy this heritage calmly, but surely, after a visit to this beautiful historic city, you will return home more rich than the royals who made it great!