What to do in Piedmont: 10 unmissable places

An austere and elegant region with a noble past, Piedmont is extraordinarily rich in art, culture and natural areas of breathtaking beauty. It is an iconic destination for lovers of wine and good food and an essential stop for mountain and winter sports enthusiasts. Finding ideas for your itineraries around this land is a simple task. Here are a few suggestions.

10. Chianale, in the Woods of Virgil

Chianale is a small slate-house village immersed in the Provençal culture and placed in an ancient forest mentioned by Virgil in the Aeneid. It is an enchanting place crossed by the Chemin Royal, the old salt road travelled by traders to reach France. Chianale is also included in the Borghi più belli d’Italia (most beautiful villages in Italy). The heart of the village is the stone bridge that crosses the Varaita, a stream that effectively divides Chianale into two parts. Not far away, you'll find the 14th-century church of Sant'Antonio: together with the Calvinist temple (now Casa Martinet), it bears witness to the religious past of the village, the only one in the valley where freedom of worship was permitted in the 17th century. The Church of San Lorenzo is more recent and dates back to the 17th/18th century. Here, there are many outdoor activities to enjoy: Nordic skiing and ice climbing in winter, canoeing and windsurfing on Lake Pontechianale in summer. Other things you can do: excursions to Monviso, trekking, and walks in the Wood of Alvè. 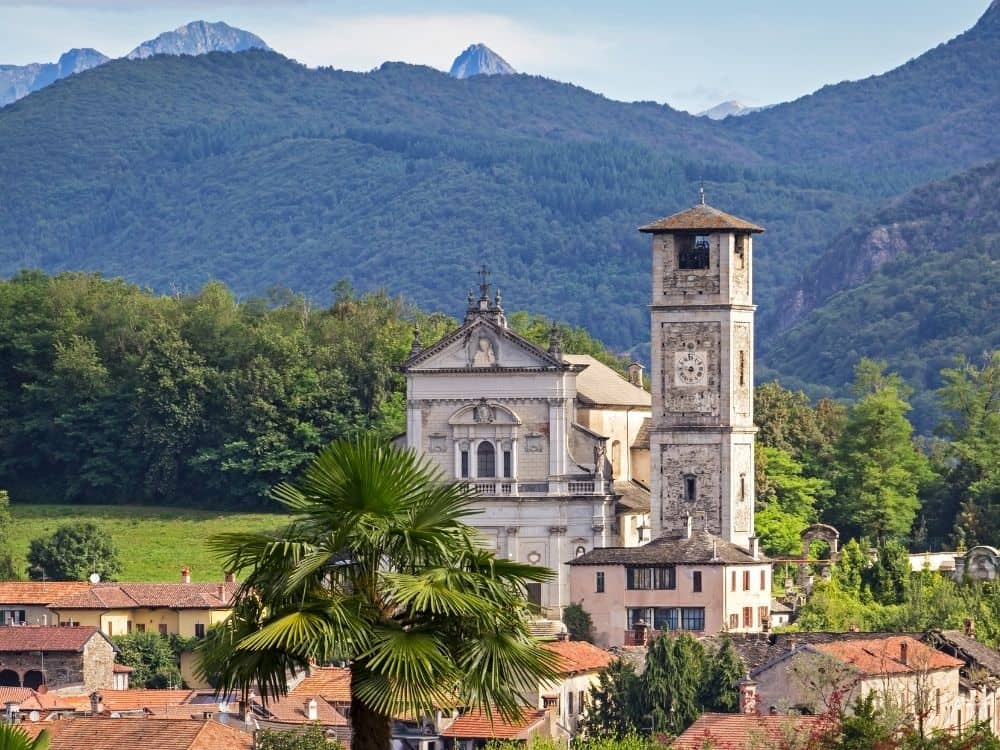 Are you looking for the perfect escape from the hustle and bustle of the city? A trip to the lakes of northwest Piedmont is the right choice, whether you want a dynamic and sporty weekend or prefer to enjoy the dreamy atmosphere of these places in complete relaxation. Lake Orta is an oasis of peace where you will find tranquillity and beauty. A tour of the surrounding villages is a must: Miasino, with its elegant mansions, including Villa Nigra; Omegna, the birthplace of writer Gianni Rodari (there is also an educational park dedicated to him, the Parco della Fantasia); Orta San Giulio, a delightful Orange Flag town with characteristic stone streets. Enjoy your stay on the shores of Lake Maggiore, among the villas and flower gardens of Stresa and Arona and the enchantment of the Borromean Islands. Want some adrenaline rush? Why not try a flight overlooking the lake while suspended 350 metres high along a zipline. Passionate about sailing? You won't struggle to find courses, regattas and organised excursions. Would you rather relax under the sun to the sound of the waves? Treat yourself to a day on the Stresa shoreline. 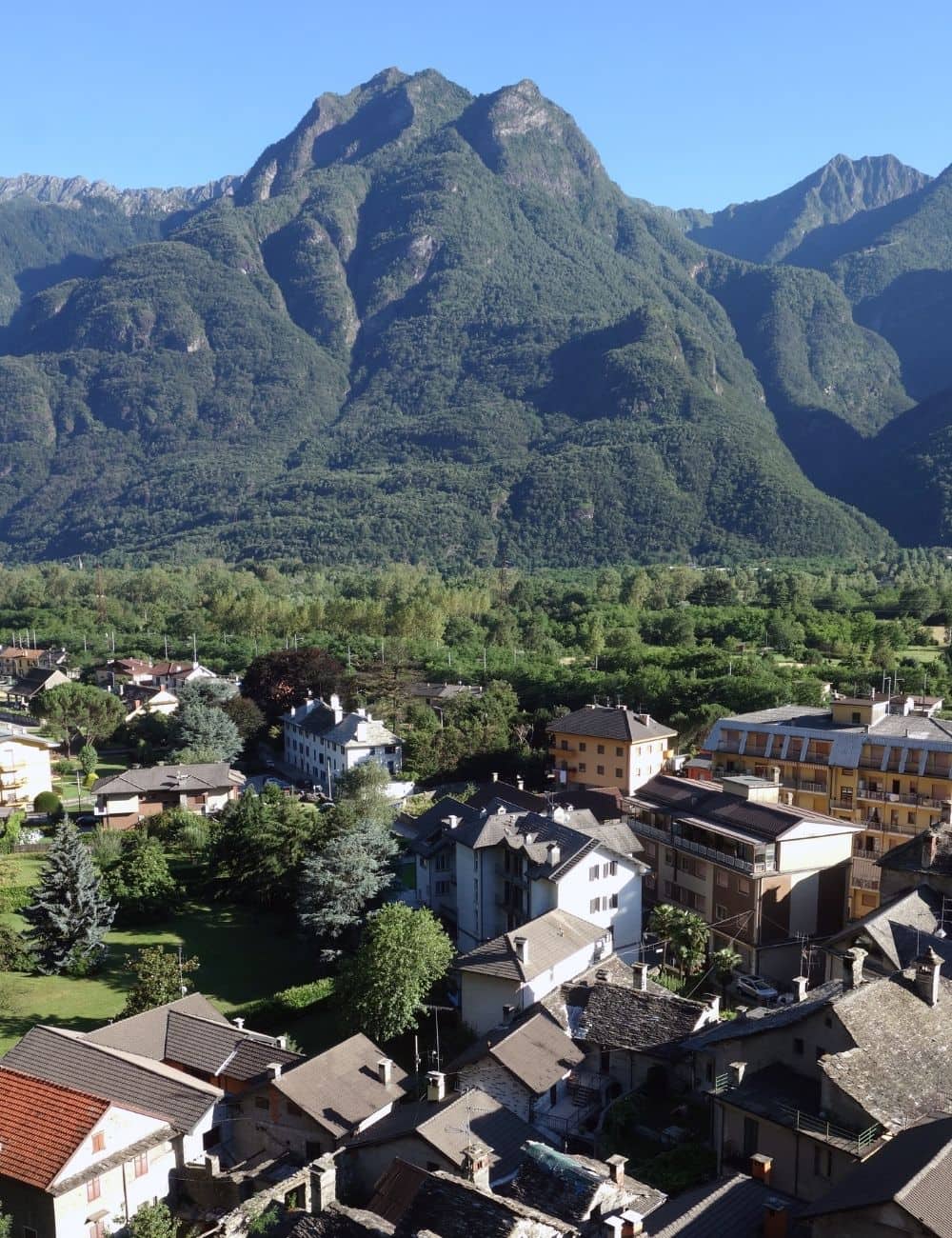 A charming borgo in the Val d’Ossola whose origins date back to Roman times, Vogogna is one of the most beautiful villages in Italy. Strolling through the cobbled streets and stone houses of this small town of only 1700 inhabitants will be like stepping into a time machine: Vogogna still preserves its 14th-century medieval architectural structure. Highlights including Palazzo Pretorio, a building dating back to 1348 that houses the Celtic Mascherone (a 3rd century BC find); Villa Biraghi Losetti (1650); the small church of Santa Marta; Casa Marchesa, the oldest noble residence (1350); Palazzo dell'Insinuazione; Piazzetta del Pozzo. The showpiece is the Castello Visconteo, an imposing 1348 structure that used to be a military garrison. To get there, you have to walk up a small road that gives you a suggestive view of the town. Continue your tour of Vogogna with a walk to Genestredo, a hamlet with typical stone masonry houses and stone-slab roofs embellished with medieval decorations. Not far away, you will reach the remains of the Longobard fortress, an imposing 5th-century fortification that dominates a vast mountain panorama. 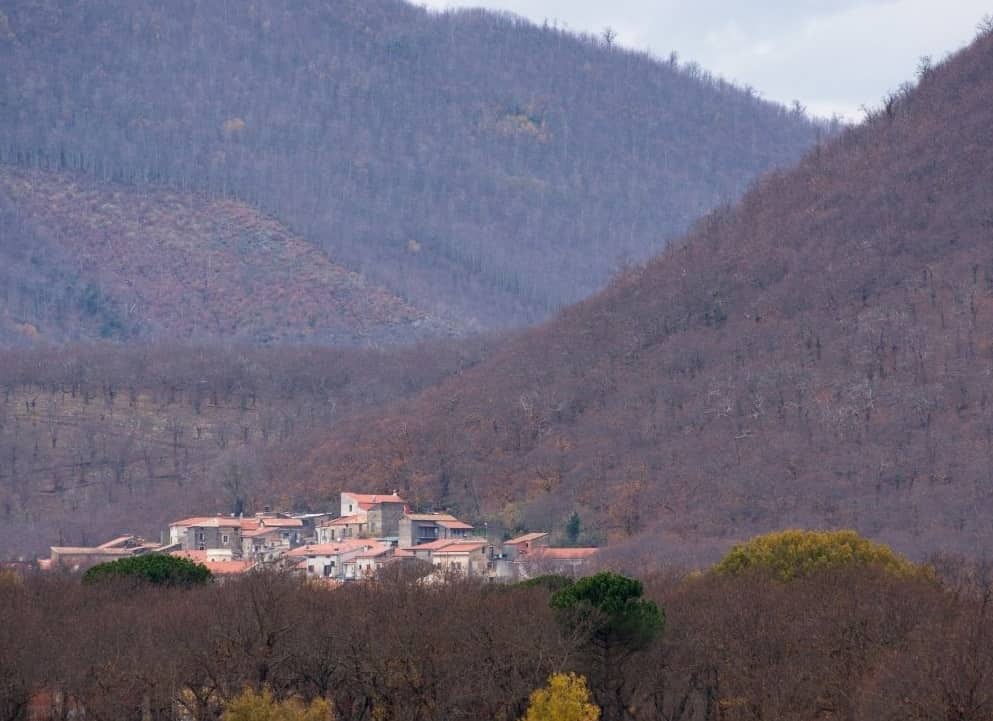 In the heart of the land of Barolo, Fontanafredda is a village with a singular history, whose events are steeped in wine, love and nobility. Its fame began in 1858 when King Vittorio Emanuele II bought 54 hectares in Serralunga d'Alba as a gift for his beloved Rosa Vercellana. The "Bela Rusin" thus became Countess of Mirafiore and Fontanafredda. But it was the couple's eldest son, Emanuele Alberto, the creator of the winemaking business; after the foundation of his company in 1878, a village arose that housed the employees' families. As you stroll through Fontanafredda, you will find information panels at every corner, illustrating the 160-year history of this little jewel of the Langhe (also use the app, which will give you access to the map and various multimedia content). Plan a guided visit to the Castle of Serralunga d'Alba, a splendid medieval fortress dating back to the 12th century, and a walk through the Bosco dei Pensieri (Forest of Thoughts).

6. Cycling in Novara through rice fields A city divided between Piedmont and Lombardy, Novara is sometimes unfairly snubbed by travellers, perhaps because of its reputation as an industrial hub of little interest. Actually, both the historic centre and the surrounding area have much to offer to those who explore these places. Among the architectural beauties not to be missed are the Duomo, the Baptistery, Antonelli's Dome and Palazzo Tornielli Bellini, now a bank building. Wandering on foot or riding a bicycle through the narrow streets and rice fields is a great way to discover Novara hinterland. Find hidden treasures such as the Oratory of Santa Maria in Garbagna Novarese, which houses frescoes by one of the leading local artists of the 15th century, Tommaso Cagnola. The alternative idea? A bicycle itinerary on the "tracks" of Alessandro Antonelli through the nine municipalities where the great architect left his mark with his works. This area is also the custodian of a rich ecosystem and a refuge for many animal species: equip yourself with binoculars and spot storks, herons, waders and ibises on one of the many nature trails. 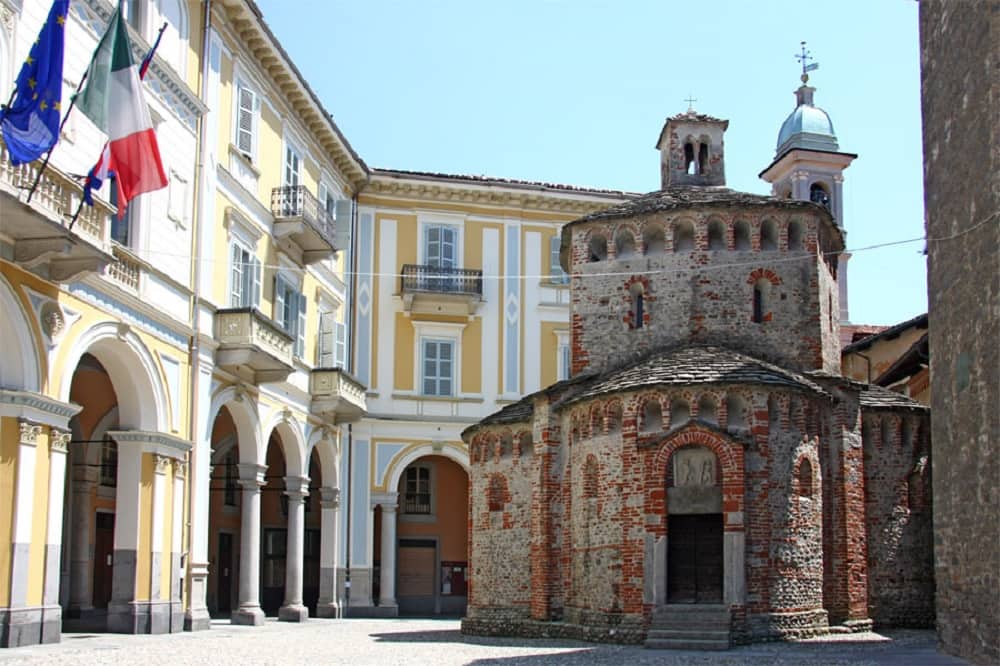 Biella, the "city of wool and beer", will be a pleasant surprise for those who decide to spend a day there (but it deserves an entire weekend). Wander around and discover its two urban cores: the upper (the Piazzo), with its medieval houses, cobbled streets and low arcades, and the lower (Piano), with its 19th-century atmosphere. Over time, Biella's textile tradition has become an integral part of the cultural "fabric" of this city surrounded by mountains, with its former textile factories now reinvented into centres of art and creativity. Not to mention the gastronomic scene, where beer is the main "dish",  as evidenced by companies and microbreweries dotting the area. The landscape surrounding Biella is enchanting: you won't be disappointed by a walk through nature and the villages nearby. Hike to the UNESCO World Heritage Site of Sacro Monte and the Sanctuary of Oropa, or take the cable car to Monte Mucrone for a high-altitude walk. At a short distance, there are two other stops to add to your itinerary: the fortified medieval citadel of Candelo and the Oasi Zegna (the colourful Conca dei Rododendri is enchanting in spring).

4. A journey through taste in Langhe, Roero and Monferrato 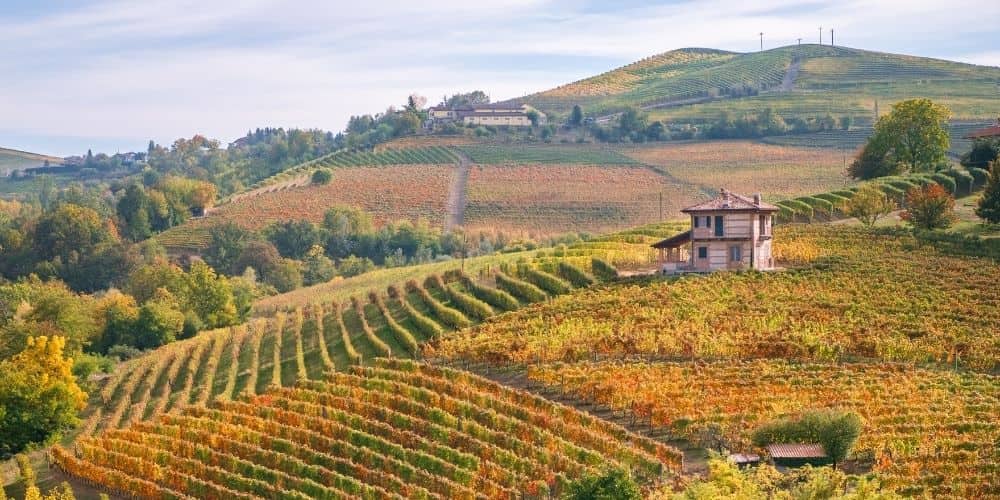 Let's make a journey into taste amidst green, hilly landscapes that will stuff your eyes with wonder and your belly with goodness. Food and wine culture is a serious matter here; there is even a university dedicated to it, promoted by the Slow Food association (the University of Gastronomic Sciences, in the medieval village of Pollenzio). So, why not discover Piedmont through its cuisine and its most typical and renowned products? First and foremost, His Majesty the Truffle. From Montà d'Alba, you might set off on one of the truffle routes under the guidance of expert hunters and their ever-present trained dogs. In Nizza Monferrato, famous for "hunchbacked" thistles and Nizza DOCG, try Bagna Cauda, a soup made with salted anchovies, oil and garlic. In Mombaruzzo, look for Amaretti, pastries made with almonds, egg whites, sugar and apricot kernels. In Murazzano, taste the DOP cheese made from the milk of Langhe sheep (a breed at risk of extinction) and, in Roccaverano, eat the famous Robiola, Italy's only historic goat's cheese. Between the Langhe and Monferrato, visit the characteristic cellars that are now UNESCO heritage sites: the Underground Cathedrals of Canelli and the Infernot in the medieval village of Vignale Monferrato.

Standing majestically on Mount Pirchiriano and hanging over the sweeping view of the Susa Valley, the Sacra di San Michele is a monumental religious complex that inspired Umberto Eco's bestseller "The Name of the Rose". The abbey is the first Italian stop on the Via Francigena, an evocative place surrounded by woods and trails trodden for millennia by pilgrims and travellers. There are various ways to reach the Sacra: by car (the nearest car park is a 10-minute walk away); by train (from the station in Avigliana, where a shuttle service is available); on foot, choosing one of the four main routes; by bike. And if you are particularly daring, you could try to "conquer" the landmark of Piedmont by climbing one of the most spectacular "ferrate" (iron steps) in the valley. Many are the spots to pay attention to, such as the Portal of Carlo Felice; the Stairway of the Dead; the statue of St. Michael the Archangel, more than five metres high; the tower of Bell'Alda; the rooms of the House of Savoy; the astonishing library, which holds about 10,000 volumes. 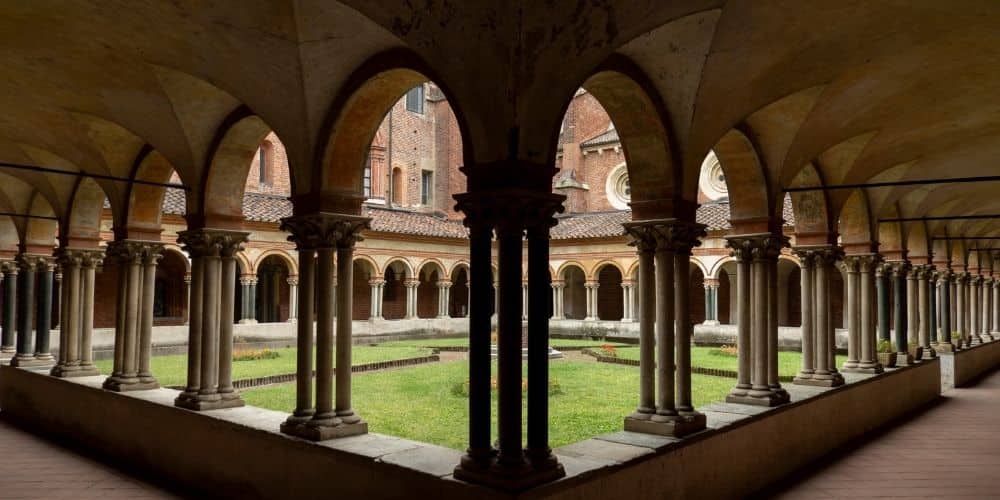 Famous for being -- along with Novara -- the Italian capital of rice, Vercelli was founded by the Celts, colonised by the Romans and dominated by the Lombards. Over the centuries, this city has undergone several domains and seen many rulers, noble families, and foreign powers. Beautiful to visit when it is clad in the colours of autumn and spring, fascinating in winter under the snow. The station is a good starting point for a day tour on foot or by bicycle. Just nearby, Piazza Roma will be the first stop on your itinerary: visit the Basilica di Sant'Andrea, the Cathedral of Sant'Eusebio, the Biblioteca Capitolare, the Pinacoteca and the Museo dell'Opera del Duomo. Continue until you reach the Synagogue and the Borgogna Museum. Other points of interest include Piazza di Palazzo Vecchio, Piazza Cavour, and the Church of San Bernardo.

Italy's first capital, a refined city with an industrial soul that has reinvented itself as a cultural and artistic centre, Turin is one of Italy's most beautiful places (and the homeland of the aperitif, too). This is well known by the floods of travellers who flock in greater and greater numbers to its monumental squares (such as Piazza San Carlo, Piazza Castello and Piazza Carignano); unmissable museums (the Egyptian Museum, the Museum of Cinema and the MAO); cafés and porches. Today, Turin is amid an architectural and urban innovation giving a new look to buildings and neighbourhoods. Its history is inextricably linked to the Savoy family. You'll tangibly realise this as you wander around the city and the surrounding municipalities among the timelessly fascinating structures that make up the splendid Corona di Delizie, a UNESCO World Heritage Site. Also, consider a bike tour: a ring of cycle paths through the beautiful landscapes around Turin links the stately royal residences. Our advice: try the "Bicerin", a traditional hot drink native to Turin made with espresso, drinking chocolate, and milk cream.