What to see in Emilia Romagna: 10 unmissable places

Created from the union of Emilia and Romagna, Emilia Romagna stretches from the Apennines to the mouth of the Po River. The Adriatic Sea washes it to the east. Emilia Romagna is famous for its hospitality and good food, including tagliatelle, Parma ham, tortellini and Parmigiano Reggiano.

But its wealth is not only its gastronomy and hospitality. The beauty of its varied landscapes is also remarkable: from the rolling hills to the sparkling Riviera Romagnola and then the beauty of its cities of art. It is no coincidence that the well-known American guidebook Frommer's has judged it the best region in Italy.

We at Visit Italy have chosen to show you what we consider to be the must-see places in Emilia Romagna...Too good and beautiful to miss!

Less well known than other cities in Emilia Romagna, Reggio Emilia is a little gem of undiscovered treasures worth exploring, starting with the fact that this is where the Italian tricolour was born. In fact, among the things to see here are the Sala del Tricolore and the Museo del Tricolore.

Also not to be missed are the Basilica della Ghiara, which houses works such as Guercino's Crucifixion and the majestic Teatro Municipale, the city's symbolic building and one of Italy's leading opera museums. Strolling through the city centre, you will notice its beautiful squares: Piazza Prampolini, Piazza San Prospero, Piazza Martiri di 7 Luglio.

Stop also to admire its crazy hilly landscapes and lush nature. Here, one of the best productions of Parmigiano Reggiano in the region.

If you have time, not far from Reggio Emilia is Gualtieri, known as the City of Water. It lies on the right bank of the Po and the left bank of the Crostolo Torrent. Here you can visit the Bosco del Caldarèn, a nature reserve rich in plant and animal species and the "oldest" lowland forest in the floodplains of Reggio. 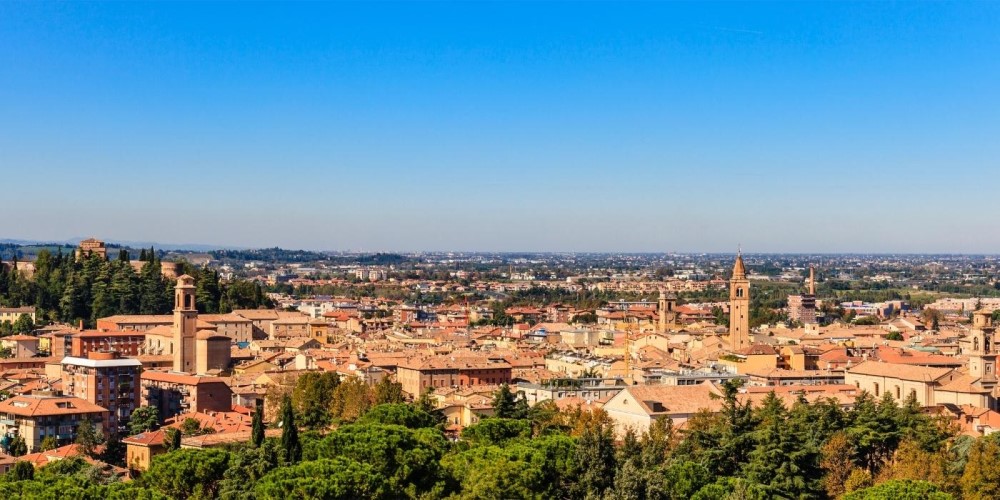 In the centre of Romagna and not far from each other are the towns of Forlì and Cesena. Two genuine localities located just a stone's throw from the Riviera, rich in monuments and historical buildings, including their medieval fortresses considered the most beautiful in Italy.

Among the other main monuments to visit: in the main square of Forlì (Piazza Aurelio Saffi), there is the Abbey of San Merculiale. In Cesena, on the other hand, the Abbey of Santa Maria del Monte is a religious symbol not to be missed.

Other points of interest worth visiting include the Indian Cemetery in Forlì, which commemorates the Native Americans who fell in Italy during the Second World War, and the Alessandro Bonci Theatre in Cesena.

We recommend an excursion to the Parco delle Foreste Casentinesi (Casentino Forests Park) to the Campagna and Falterona mountains for trekking enthusiasts. Located on the ridge of the Tuscan-Emilian Apennines, this is one of Italy's most beautiful and evocative parks.

Finally, one of the main reasons for visiting these two superb locations is gastronomy. Taste fresh egg pasta, Piadina, Cassone Romagnolo, cold cuts such as culatello and mortadella. 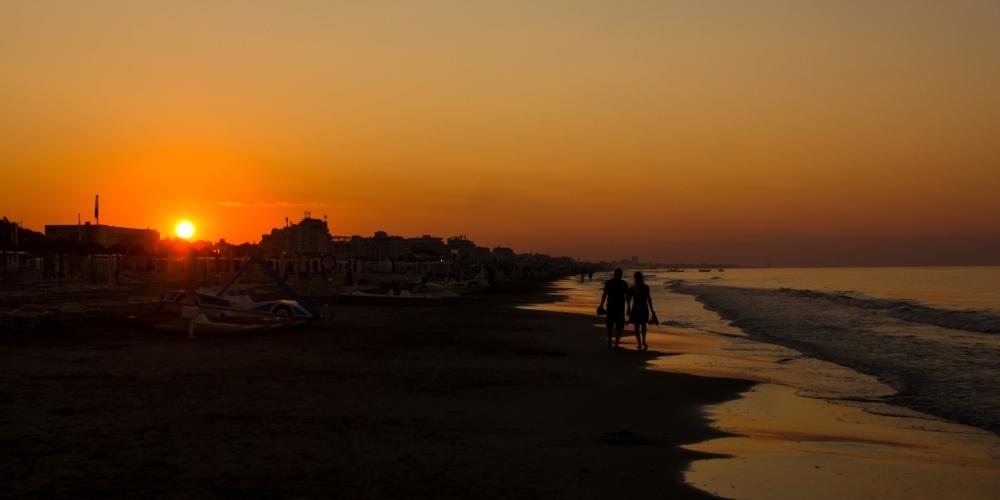 However, we also want to have fun after so much art and culture! And so we suggest the sparkling Riccione, one of the most popular summer destinations in Italy, especially for young people and nightlife lovers. The fulcrum of the summer Movida is Viale Ceccarini, full of clubs and shops, which leads directly to the sea and its beaches.

But as much as Riccione is the Olympus of Italian summer fun, there is also a lot of culture and history hidden here. An example is its old town full of historic shops and small cafés. You will find the Castello Degli Agolanti, built around the middle of the 14th century and now the venue for numerous exhibitions and events.

For lovers of architecture, in Riccione, you can discover and admire its many Art Nouveau villas. Most date back to the early 1900s, when the city established itself as a holiday resort. For nature lovers, one of the most exciting things to see in Riccione is the Alboreto Cicchetti: a former nursery turned into a multifunctional space, home to several social cooperatives and housing a greenhouse, a planetarium, a park and fair trade shops.

If you have time to spare, plan a trip to Gradara, a picturesque medieval village with a "divine" history behind it and adorned with beautiful street artworks.

Piacenza is a large, very modern city. Still, it has retained an attractive historic centre with medieval and Renaissance buildings to admire. The jewel in the crown is the Palazzo Gotico in Piazza dei Cavalli, a beautiful 13th-century palace in marble and red brick. Piazza Duomo is also worth a visit with the Cathedral of Santa Maria Assunta and Santa Giustina, the city's principal place of worship.

Take advantage of your visit to the city also to visit the nearby medieval villages of Gazzola and Bobbio. Gazzola is a small ancient village where the magnificent Castello di Rivalta stands, a medieval castle of military architecture characterised by an elegant 15th-century cylindrical tower. Bobbio is on Mount Penice in the Trebbia Valley. Here, you can admire the Ponte Gobbo or "Ponte del Diavolo" (Devil's Bridge), which recalls the legend of Saint Colombano. 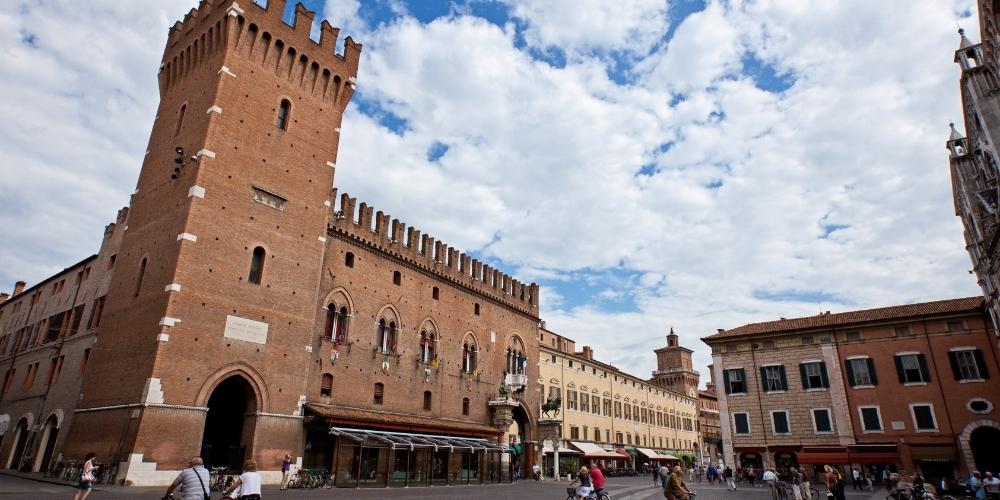 Ferrara is in the lower Emilian plain, 50 km from Bologna. Here the glorious memories of the Este family are preserved intact.

On the last Sunday in May, the Palio di San Giorgio is held, the oldest Palio in Italy, instituted by the city council in 1279 and modified in 1471 to greet the entry into Ferrara of Duke Borso d'Este on his return from Rome, where he awarded the title of duke. Even today, during the Palio, the fifteenth-century procession that welcomed the duke is reproduced, with no less than eight hundred characters in period costume.

Ferrara is rich in beautiful historical architecture, such as:

- The Palazzo dei Diamanti (Palace of Diamonds), so-called because of the over 8,500 marble blocks that make up its rustication and give it a unique and original shape;

- The Estense Castle, the symbol of Ferrara and surrounded by the typical moat of medieval castles;

- Villa Boccaccini: located a short walk from Lido Degli Scacchi, it dated back to the 1700s and became famous in the 1970s as the location for Pupi Avati's controversial film La Casa delle Finestre Che Ridono (The House of Laughing Windows). Today it has been transformed from a great house into an abandoned palace. It is still possible to breathe in a ghostly and magical atmosphere. 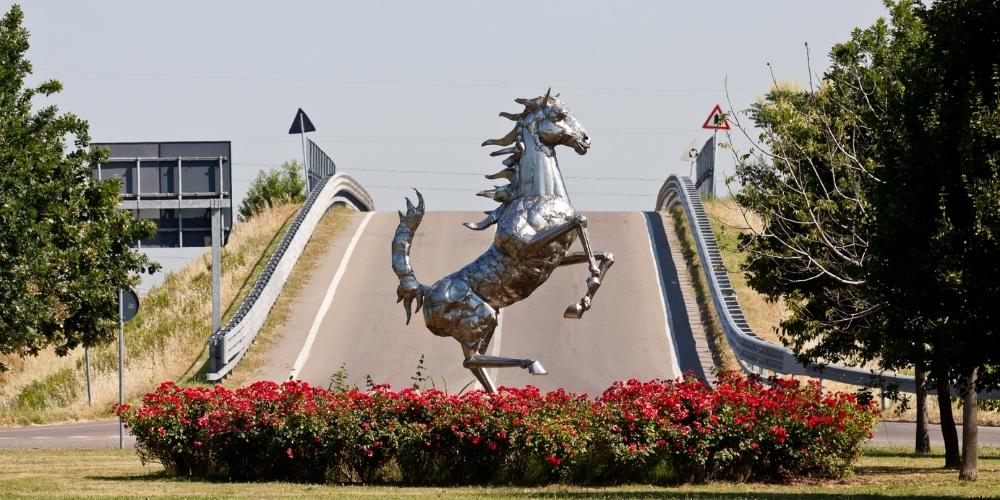 Modena is undoubtedly not to be missed on the places to see in Emilia Romagna. A beautiful city where art and culture come together, thanks to the presence of numerous magnificent architectures and noteworthy museums.

It is undoubtedly its Cathedral with its Ghirlandata Bell Tower, a UNESCO World Heritage Site and the highest expression of Romanesque culture. But, museums are also mentioned, such as the Galleria Estense, the Civic Art Museum, the Museum of Zoology and Comparative Anatomy, and the Museum of Figurines.

Emilia Romagna is also known as the land of motors. Ferrari, Lamborghini and Ducati were born here. It is why lovers of the four wheels, and not only, cannot miss a visit to Maranello, where Ferrari was born and where happens production and testing every day. Here is the beautiful Enzo Ferrari Museum, where you will see the monumental Prancing Horse, the trophies of the victories and many spectacular vintage cars.

Elected Capital of Culture in 2020, Parma will enchant you with its beauty and remote territories. Some of its most beautiful monuments include the Baptistery, the Charterhouse, the Ducal Palace and the Regio Theatre.

And this is only for what concerns its historical centre because if you decide to go into the surroundings, you will discover:

- The Bardi Castle: for more than a thousand years on a spur of red jasper, a very ancient stone, known for its vermilion veins;

- The Torrechiara Castle: one of the fascinating castles in the whole region, where the Middle Ages and the Renaissance blend perfectly;

- The Labyrinth Fontanellato or della Masone: with a star-shaped plan covering seven hectares, it is the most extensive labyrinth in the world made entirely of bamboo plants;

- The Respighi Thermal Baths in Tabiano: known as the breath spa for its sulphurous waters, considered among the best in Europe. It is also worth visiting the town of Tabiano (not far from Salsomaggiore), rich in elegant and well-preserved historical buildings.

Parma is also a well-known destination for gastronomic tourism, so don't miss the opportunity to taste Parma ham and Parmigiano Reggiano cheese. 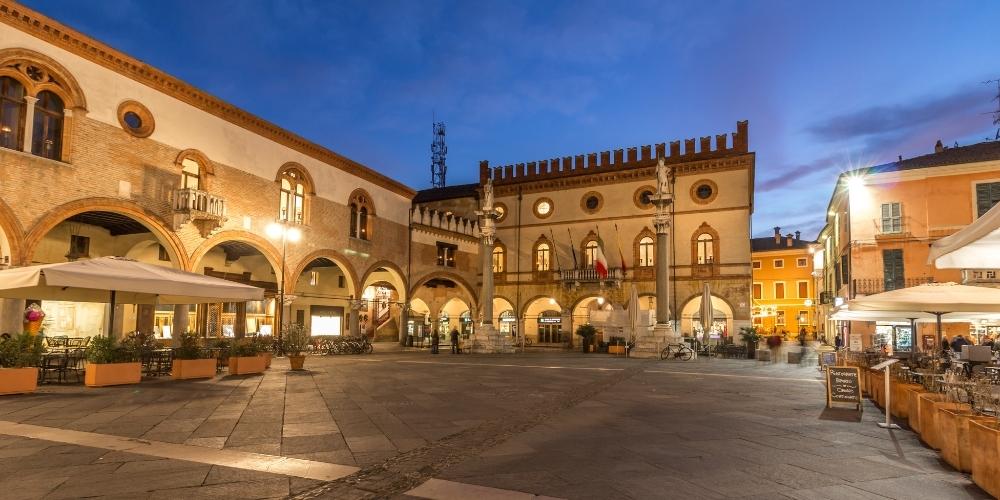 Ravenna is the most historically significant city in Emilia Romagna. Since 1996, eight of its monuments have been UNESCO World Heritage Sites. Among the most famous and visited places in the town are Piazza del Popolo and the Duomo.

If you have time to spare, don't miss the opportunity to visit the nearby medieval village of Brisighella (equally distant from Florence) and part of the most beautiful villages in Italy. Built on three hills stand three small fortresses, all reachable on foot. 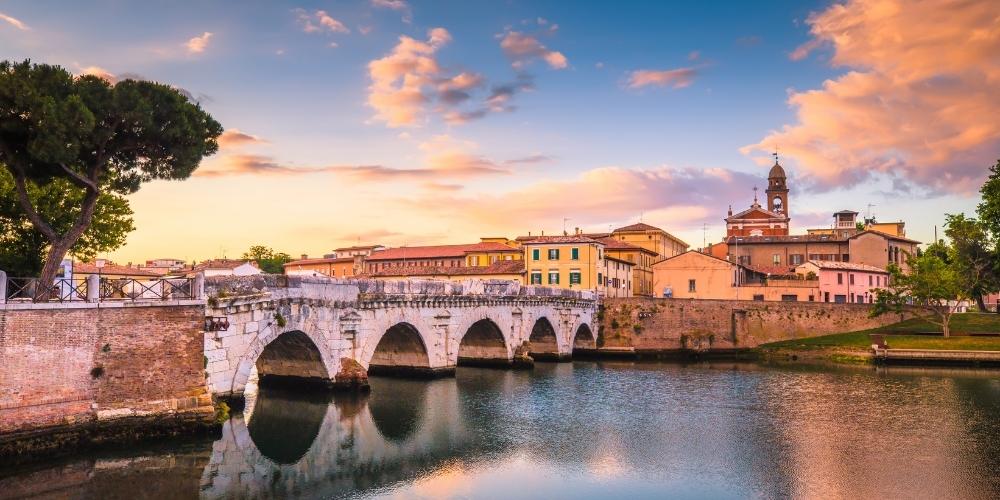 Rimini is the epicentre of the Riviera Romagnola and the region's social life hub. Here was opened that the first Italian bathing establishment in 1843.

But Rimini is not only sea, beaches and fun...it is much more! There are many attractions of historical interest such as:

- Augustus Arch: the largest in northern Italy and the arrival point of the Via Flaminia;

- The Roman Forum: where Julius Caesar made his famous speech after crossing the Rubicon;

- The Surgeon's House: one of the most important archaeological discoveries in recent years with a complete collection of surgical instruments from antiquity;

- The Malatesta Temple: where there is Giotto's wooden Crucifix;

Rimini is also the birthplace of film director Federico Fellini, to whom the murals in the colourful Borgo San Giuliano are dedicated.

And at the top of the list is here: Bologna! The "learned", "fat", "red"... these are just some epithets that the city has inherited over time, each with a specific meaning. The capital of Emilia is home to the oldest university in Italy and one of the most prestigious.

The historical centre adorns by beautiful Portici (entrances), which have recently become a UNESCO World Heritage Site. Good food is a constant in Bologna, and the nightlife is in no way inferior to that of the great European metropolises.

Not to be missed: the Two Towers (the Garisenda and the Asinelli), Piazza Maggiore, the Neptune Fountain, the Basilica of San Petronio, the Sanctuary of San Luca. But also art museums such as the Pinacoteca Nazionale and MAMBO (Museo d'Arte Moderna di Bologna), dedicated to new trends in contemporary art.

While you're there, plan a trip to the nearby painted village of Dozza, with its medieval fortress towering over the streets and walls adorned with beautiful murals.

Che col peggior spirto di Romagna | trovai di voi un tal, che, per sua opra, | in anima in Cocito già si bagna | ed in corpo par vivo ancor di sopra. (I found one of you with the worst spirit of Romagna, who has already bathed his soul in Cocito and seems still alive in his body.)