Modena and its Cathedral, Torre Civica and Piazza Grande: UNESCO World Heritage since 1997

In the heart of Emilia-Romagna in northern Italy, a city of art, home to tasty gastronomy and land of motors rises. Due to the ancient history of its foundation, Modena looks stuck in medieval times. Its architecture gained a deserved place on the UNESCO world heritage list in 1997. Let’s discover together the secrets of this stunning city! 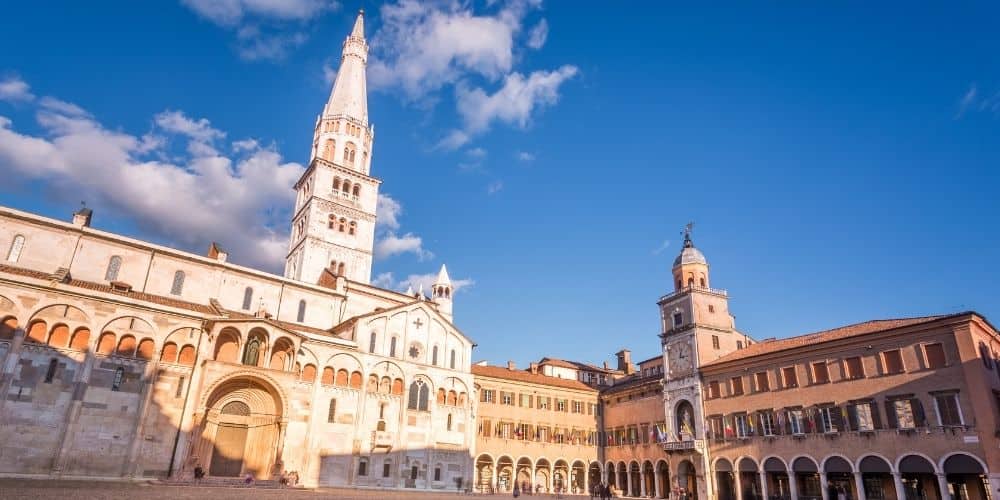 The origins of Modena are uncertain and probably date back to the Etruscan period. The first historical reports coincided with the expansion of the Roman Empire (2nd century BC), when the Romans created the great artery of the Via Emilia and proclaimed the ancient Mutina Roman colony.

Like many other Italian cities after the crisis of the Empire, Modena also went through a long period of famine and degradation. The construction of the Cathedral marked the restoration of the city. The works began in 1099 to accommodate the remains of the patron, San Geminiano. At the time, the episcopal seat was vacant. This curious circumstance points out the obstinate desire of people for rebirth even when there was no authoritative ecclesiastical power to prepare the commission of such an architectural work.

The influence of the Este family

During the centuries, Modena saw several prominent royal families ruling the city; that is why it was enriched with numerous religious and civil buildings, the same that today give it a solemn appearance. During the Renaissance, the House of Este gave glory to the city, transforming it into the capital of the duchy and giving it the title of città estense (city of Este) par excellence at the end of the sixteenth century.

Modern Modena: the rumble of engines

Today Modena is a modern city thanks to a revival of urban planning used between the nineteenth and twentieth centuries. In particular, the period after World War II saw this city ride the wave of economic boom with the birth of major automotive industries such as Ferrari and Maserati. Even if you are not passionate about car racing, it is worth visiting the Enzo Ferrari Museum. Opened in 2012, the museum tells the story of the birth of the red legend with its dominant roar and unique design.

In addition, as every respectable Italian city, Modena has a gastronomic tradition of excellence, both PDO (Protected Designation of Origin - DOP in Italian spelling) and PGI (Protected Geographical Indication - IGP in Italian spelling). The Emilian city is home to traditional products strongly linked to the territory and considered Made in Italy excellences appreciated and known worldwide.

Here are some of them:

•Modena DOP and IGP balsamic vinegar is the result of painstaking work by skilled hands, unique climatic conditions and the processing of grapes grown exclusively on the territory;

• Parmigiano Reggiano DOP is the King of cheeses. Made from the milk of cows grown on the territory and fed with fodder from the area of origin, it is probably the most famous cheese in the world. From production to packaging, all the constituent phases of Parmigiano Reggiano DOP are carried out exclusively in Modena, Mantua, Bologna, Parma and Reggio Emilia;

• Lambrusco Modenese DOP is a sparkling red wine with a fresh and delicate flavour. Known all over the world, Lambrusco DOP is one of the bases of the economy of Modena;

• Prosciutto di Modena is a cured meat made from the thigh of white pigs reared exclusively in Italy. This product gets trademark protection only after 14 months of seasoning.

Modena and the music

Finally, it is worth mentioning that Modena was the birthplace of the world’s most famous Italian tenor, Luciano Pavarotti. It doesn’t seem a coincidence that one of the most appreciated voices in the world was born right here. Modena has established a deep bond with music since the House of Este era. The passion and love for singing have always been cultivated in schools, musical institutes and theatres. Today, the same dedication is carried on through a rich program of musical events in the theatres and squares of the city.

The UNESCO Site of Modena

The magnificent 12th-century Cathedral of Modena, Piazza Grande and the Civic Tower are a triumph of Romanesque art by two great Italian artists, Lanfranco and Wiligelmo. The complex is a symbol of Romanesque art in Italy and throughout Europe. For this and other reasons, it was included in the UNESCO list of World Heritage Sites in 1997.

Founded in the twelfth century, the Piazza del Duomo took on the name of Grande only five centuries later. It represented the place where political, civic and religious power was managed. It was also the space prepared for the market. Here, the market was a place of trade, exchange of opinions, gossip and curiosity about the city life. In essence, Piazza Grande was the real beating heart of the city. Solemn religious processions, sacred representations and joyful feasts in honour of the patron took place in Piazza Grande, sometimes overlapping the sacred and the profane. In addition, the square was also the scene of masked parties during the carnival and other fairs, tournaments and shows with which the acrobats entertained the audience.

The airy and majestic Piazza Grande is framed by the Civic Tower (also called Ghirlandina), the Cathedral and the porch of Palazzo Comunale.

As already mentioned, the Cathedral of Modena was heartily desired by the citizens to preserve the remains of the patron, Saint Geminiano. The work began in 1099 and was completed in the fourteenth century by the Masters Campionesi, who were entrusted with the interior and the Civic Tower.

In just seven years, the Italian architect Lanfranco managed to finish the architectural structure of the mammoth church. The sculptural decoration of the facade was entrusted to the master Wiligelmo, who worked side by side with the Lombard architect. The sculptor sculpted the numerous figures placed on the Cathedral facade, depicting sacred and profane images that summarized the mysteries and uncertainties of faith typical of medieval man. Through the eternal struggle between good and evil, men are led to face the difficulties of daily life, always keeping in mind the great divine plan; this is narrated through solemn forms and figures that refer to complex biblical and theological meanings, typical of the time.

The facade of the Duomo is decidedly monumental. Wiligelmo’s inspiration explodes in the decoration of the Major Portal, where the master perfectly synthesized the vision of the world of his time: existence is a troubled path whose only goal is heavenly salvation. The medieval metaphor of life is perfectly represented by a continuous struggle that opposes the believer to medieval beasts (even fantastic) such as lions, dragons and centaurs. The figures of the Patriarchs and Prophets, on the other hand, represent the coming of Christ and the only way of salvation to redeem oneself and escape the temptations of the devil.

The large central rose window gives the dim internal light of the Duomo, which illuminates the way to the crucifix placed on the altar. The darkness contrasts with the whiteness of white marble, giving the interior spaces a solemn atmosphere.

The tomb of San Geminiano is kept in the crypt.

Here is a fun fact: The Cathedral of Modena is also called La Bibbia di pietra (The Stone Bible). In medieval times, common people were illiterate, and the images and sacred symbols in the magnificent Cathedral covered a didactic function for them.

The symbol of Modena is the Civic Tower, which stands next to the Duomo. With its almost 90 metres in height, the tower was retitled La Ghirlandina (the little garland) by citizens, emphasizing the sculptural mastery of the double circle of balustrades that embrace the spire making it look like marble garlands. The exterior of the Ghirlandina consists of a majestic sculptural apparatus built with materials from the ancient Roman Mutina.

Inside, the tower hides a spiral staircase. On the fifth floor, there is the so-called Torresani Room, where the tower guardians once lived. Going up to the top, then, you can enjoy a magnificent view of Modena from a truly unique perspective.

In ancient times, the ringing of the bells marked the city life, signalling moments of danger and calling to collect the population when necessary.

Here is a fun fact: The chronology of the building of the Ghirlandina is still being studied. There are no direct historical sources regarding the very first constructive phases.

Below, some of the criteria that have allowed these spectacular architectural works to become a UNESCO World Heritage Site.

Criterion (I): «The joint creation of Lanfranco and Wiligelmo is a masterpiece of human creative genius in which a new dialectical relation between architecture and sculpture was created in Romanesque art».

Criterion (II): «Between the 12th and 13th centuries, the monumental complex represented one of the principal forming grounds for a new figurative language, destined greatly to influence the development of the Romanesque in the Po valley. [...] At the European level, the sculpture of the Cathedral of Modena represents a privileged observatory for the understanding of the cultural context accompanying the revival of monumental stone sculpture. Only very few other monumental complexes, such as Toulouse and Moissac, can claim to be so important in this respect».

Integrity: «Over time, Modena’s monumental complex has retained its historical, social and artistic features that define its Outstanding Universal Value. The works carried out over the centuries on the World Heritage monumental complex were always aimed at keeping the buildings efficient and useful while basically preserving the spatial proportions and volumes, prolonging its life without altering its physiognomy and functions».