Ferrara, city of the Renaissance and its Delta del Po, UNESCO World Heritage Site since 1995

The city of Ferrara and its delights in the surrounding area owe their fame to the important work of the Lords who ruled here: the Este family. Even today, the historic centre and the countryside bear witness to the work of qualification that led this Emilian centre to become one of the most important cities of the Renaissance.

Ferrara, the city of the Renaissance, is one of the most prestigious historical centres in northern Italy where, even today, walking through the streets, you can appreciate the authenticity of a glorious past as told by its imposing castle, noble palaces and alleyways that still speak of the history of this place.

Located in Emilia Romagna, it is not only famous for its architectural beauty: of equal interest is the surrounding area, the river Po Delta, which was named a World Heritage Site a few years later (1999) as a cultural landscape of great interest.

Ferrara, city of the Renaissance, history The beauty of the city of Ferrara is closely linked to its history and that of the powerful families that have ruled over it. Founded in the 7th-8th centuries by the Lombards, the town grew considerably in the Middle Ages, enriching itself with Romanesque buildings and monuments.

But it was with the Dukes of Este, lords of the city from the thirteenth century, that the urban layout of the centre underwent its most important changes, changes that earned Ferrara the title of Renaissance city. The architects of the Dukes aimed to give overall harmony to the entire historic centre by creating plays of perspective and balance between the buildings. The rule of the Este family lasted for a long time (until the 16th century) and ended when the city came under the rule of the Papal States. The Renaissance was indeed the golden age of the city, which became one of the most powerful centres in Italy.

This period was followed by French domination and annexation to the Kingdom of Sardinia until the present day, when Ferrara became an important tourist centre in Emilia.

Ferrara, city of the Renaissance, the historic centre 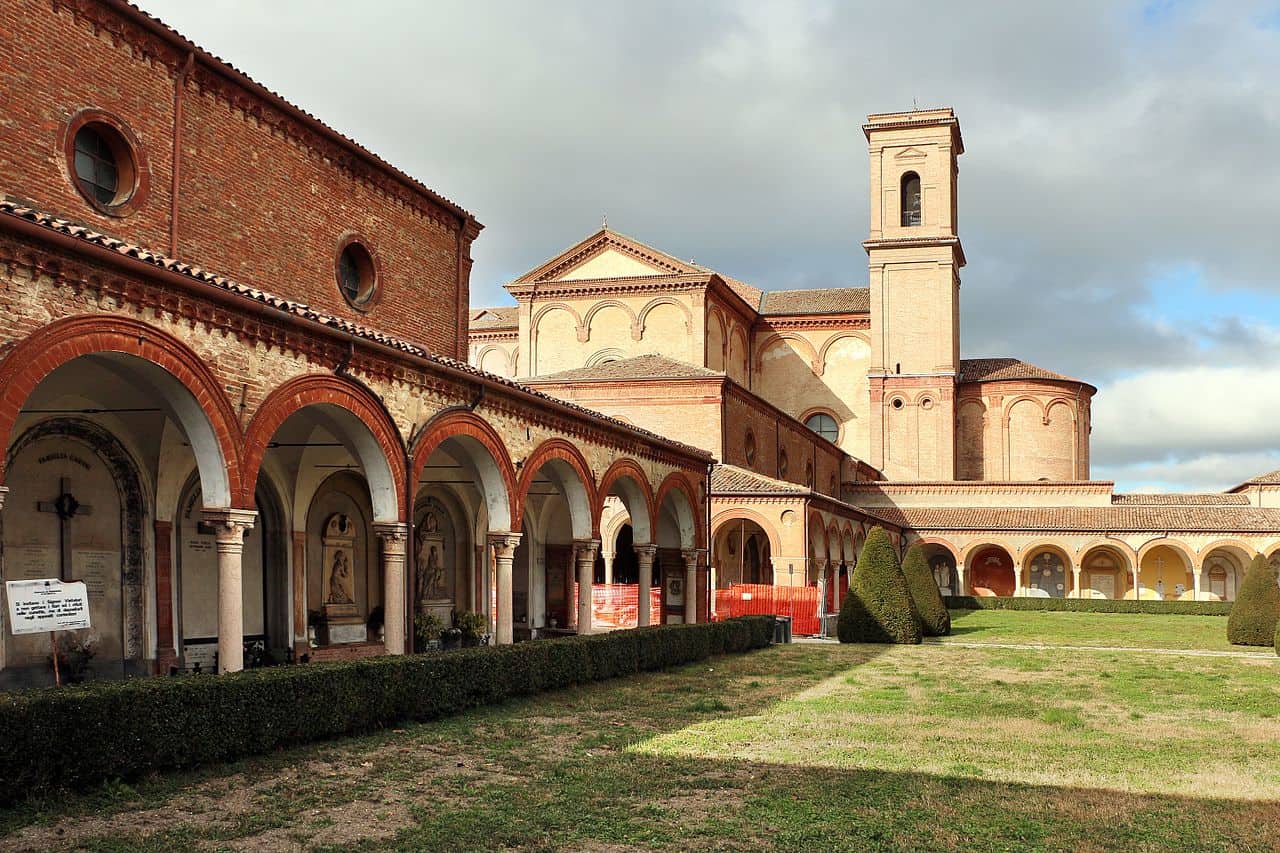 The city of the Renaissance is also known as the "city of bicycles", the ideal way to visit the quiet and cosy historic centre and reach the numerous points of interest. Among the attractions that have earned Ferrara World Heritage status is the famous Este Castle, built in 1385 and used initially as a military and defensive fortress and later as a noble residence. The fortress is solid, imposing and surrounded by a moat; it stands out in the city centre no longer to repel enemies but to welcome visitors. Another noteworthy building is the Cathedral dedicated to St George: its façade with its loggia and sculptural decorations of enormous value is unique in Italy, particularly for the theme represented on the main portal, the Last Judgement. The church overlooks the famous Piazza delle Erbe, the town's meeting place for the fruit and vegetable market. From here you can walk along the "listone", a 12-metre wide and 120-metre long pavement ideal for stalls and long walks. From the square, the streets lead to the city's numerous noble palaces, each with its own identity and very strong characteristics: the Palazzo dei Diamanti, so called because of the unusual decorative motif of its façade made up of 8500 marble blocks, is currently an art gallery; and Palazzo Schifanoia with its beautiful Salone dei Mesi, a cycle of frescoes on astrological and mythological themes. Continuing through the historical centre, the most suggestive corner of the city is certainly Via delle Volte, a 2km-long cobblestone street named for the arches that decorate it; where today we find the typical Emilian trattorias, the street was once a route of commerce and even racketeering, leading to the Jewish ghetto, another important medieval quarter of the city.

Near the Po River 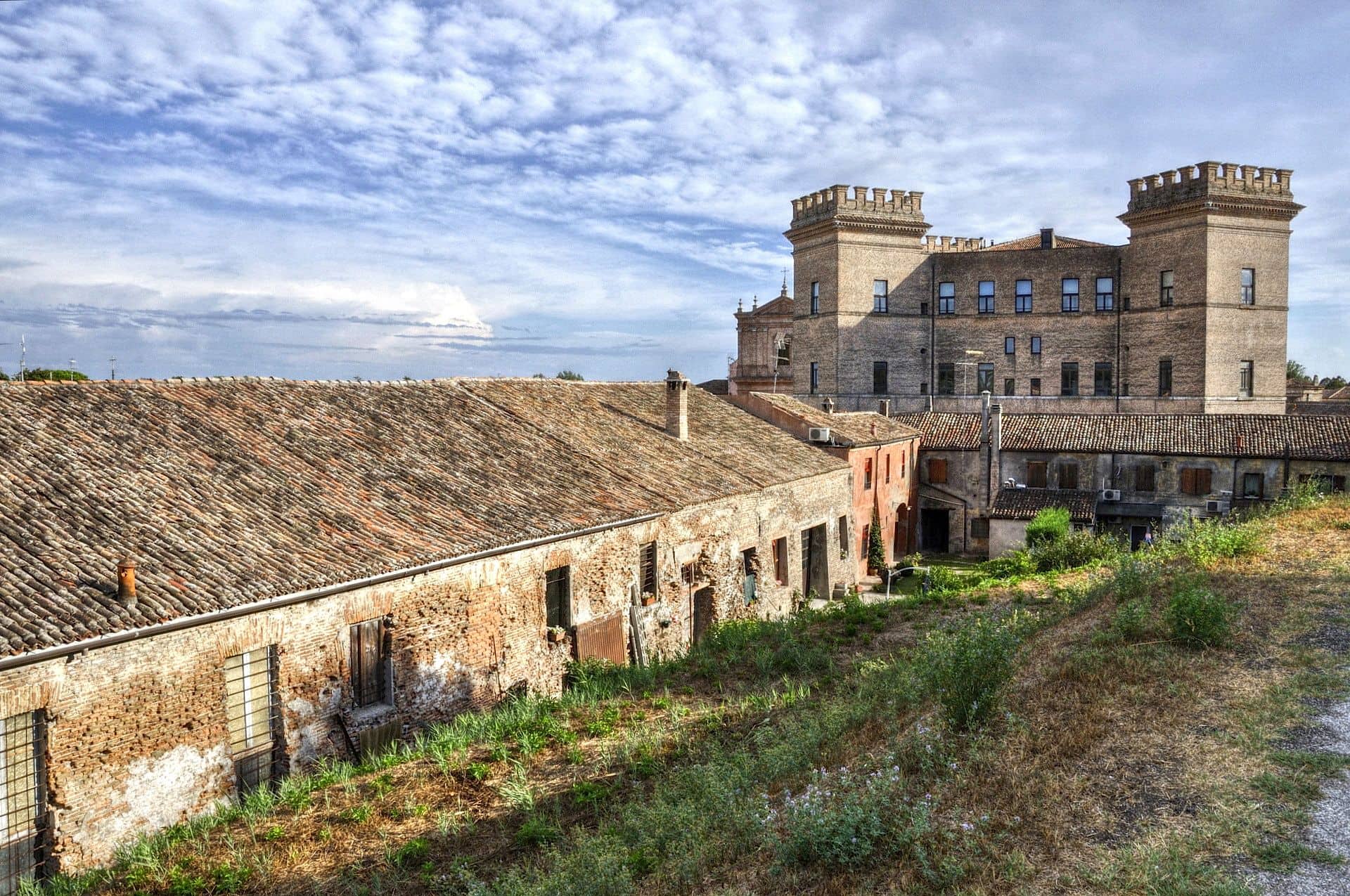 But the greatness of the Dukes of Este did not stop at the historic centre of Ferrara alone.

Between the fourteenth and sixteenth centuries the family undertook a major transformation of the marshy area of the Po Delta by reclaiming the land surrounding the city.

New canals and roads were created, as well as the so-called 'castalderie', valuable agricultural estates decorated with large gardens. To these were added the Este "delizie" (delights): palaces and noble villas reflecting the magnificence of Ferrara's aristocratic families. The villas were frescoed by the most famous Renaissance artists and had elegant salons where the nobles passed the time between parties and moments of leisure and culture. Each delizia had its own characteristics, ranging from the ornamentation of the gardens to the numerous decorated rooms. Among these, which can still be visited today, are the Este Castle della Mesola, where deer hunting was practised, Villa della Mensa, the favourite residence of the Bishops, Delizia di Belriguardo with its 300 rooms, Delizia del Verginese with its fruit trees and aromatic herbs and Delizia della Diamantina, open on special occasions.

The estates and luxurious palaces were connected by a dense network of waterways to the centre of the Emilian city, which is why the entire Po Delta area underwent a redevelopment that still earns it the title of World Heritage Site as a cultural landscape. It is no coincidence that one of the symbols adopted by the Este family was the unicorn, the symbol of reclamation and purity.

A large part of the 52 Delizie ferraresi have now disappeared, although they leave traces of the ambitious project of the Lords of Ferrara, who succeeded in bringing together land, water and architecture with a view to rebirth.

The UNESCO Commission has defined the 'Renaissance City' as 'an admirable example of a city designed in the Renaissance, which preserves its historic centre intact and expresses canons of urban planning that have had a profound influence on the development of town planning in subsequent centuries'. Ferrara, with its urban planning that has remained unchanged over the centuries and its Renaissance spirit that still hovers among the palaces and castles, is one of the most famous heritages of northern Italy. Anyone who visits it is fascinated, not only by its architectural beauty but also by the authentic atmosphere, cuisine and suggestive views.

Moving into the surrounding area, one encounters the Delizie: "the residences of the Dukes of Este in the Po Delta illustrate in an exceptional way the influence of Renaissance culture on the natural landscape".

With these words, the UNESCO commission emphasises once again how the combination of landscape and architecture creates something unique in this area. A world heritage site between history and nature.

Did you know that in Italy there are 58 Unesco Sites? If you want to know everything about these incredible places, don't miss Visit Italy's complete guide to Unesco Sites, region by region!