The capital of the Middle Ages, Gradara, pays tribute to the figure of Francesca da Rimini and her cursed love with Paolo Malatesta through the artistic and contemporary expression of street art.

Gradara: the capital of the Middle Ages

As we have already told you in a previous article, Gradara is a medieval village in Pesaro - Urbino. It is part of the group I Borghi più Belli d'Italia (Italy's Most Beautiful Villages). It has won the title Capital of the Middle Ages.

Gradara's main attraction is its castle, located at the highest point of the town. It was built in 1150 by the De Griffo family and then passed to the Malatesta family, who created the 800-metre-long town wall, still standing today.

It is in this castle that the cursed love story between Paolo and Francesca takes place. It is also the room where the tragedy recounted by Dante in the fifth canto of the Inferno of the Divine Comedy took place.

The love story of Paolo and Francesca

Unlike Romeo & Juliet, born from the brilliant imagination of William Shakespeare, Paolo and Francesca are two real-life characters. However, the historical events are still full of gaps: little biographical information has come down to us.

On the other hand, many literary and artistic versions have spoken and taken inspiration from them: Dante, Boccaccio, Petrarch, D'Annunzio, Pellico, Zandonai, Scheffer, etc. All of them have enriched the narrative with the addition of their characters. They all increased the description with fascinating details, to the point of confusing history and legend.

Francesca da Polenta was the beautiful daughter of Guido Minor, Lord of Ravenna and Cervia. In 1275 Guido planned to wed his daughter Francesca to Giovanni Malatesta, or Gianciotto, also known as Gianne lo Sciancato because he was ugly and lame. Her father owed him the favour of having driven enemies out of his lands.

Considering Gianciotto's unattractive appearance and Francesca's possible rejection, Guido and Malatesta da Verucchio, known as the Mastin Vecchio or the Centenario (Gianciotto's father) plotted a deception. They sent Paolo, known as Il Bello - The Handsome (Gainciotto's brother), to Ravenna, making Francesca believe that he was the one she was going to marry.

Discovering the reality of the facts only on the wedding day, Francesca resigned herself to her fate. Paolo, regretting his deception, often visits his sister-in-law. One day, although they were both married, they fell in love and began a clandestine relationship.

One of the brothers, Malatestino dell'Occhio (Malatestino of the Eye), was so-called because he only had one eye (from which he could see very well). He spied on them and reported their meetings to Gianciotto. And so, one night in September 1289, Giovanni finished them both off with his sword: Francesca died in front of her beloved Paolo in the act of saving him.

Galeotto was the book and he who wrote it.

In his Divine Comedy, Dante Alighieri places the unfortunate lovers in Inferno because they are guilty of adultery, a grave sin, but he makes them wander together. We are in the circle of the Lustful. Unlike the other damned souls, they do not fly separately but together and seem extraordinarily graceful.

While Paolo remains silent and weeps, it is Francesca who tells their story to Dante. Dante portrayed Francesca as a noble and gentle soul creature, described with detachment and coldness, unlike the other lustful women. Who, although damned, feels the desire to pray for Dante to find comfort and peace. Francesca's words explain an idea of love that recalls Amor Cortese and, to a large extent, Christian theology: no loved person can fail to reciprocate love, and the love that each person gives to others always returns.

In the course of history, Francesca was first a negative figure, a traitor for bigots. Slowly, finally, she became the image of freedom, of those who believe in themselves and face everything, even death: passion, sin, freedom, beauty, the end.

Love, that on gentle heart doth swiftly seize,100 Seized this man for the person beautiful That was ta'en from me, and still the mode offends me. Love, that exempts no one beloved from loving, Seized me with pleasure of this man so strongly, That, as thou seest, it doth not yet desert me; Love has conducted us unto one death. 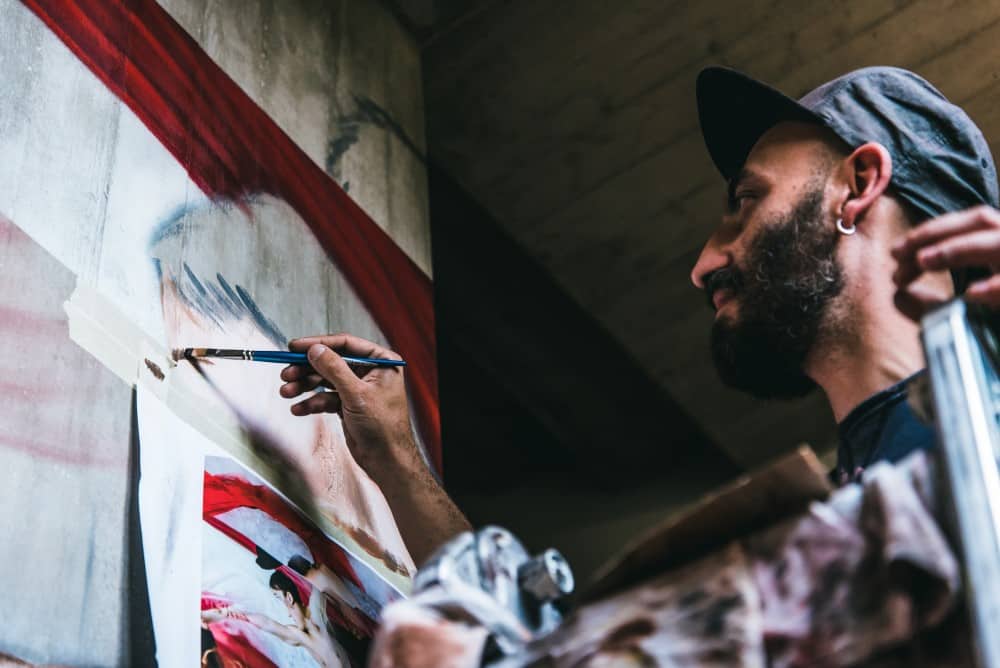 It is from this last thought that the Oltre Le Mura project comes to life. A three-year project came to life in Gradara in September 2018, during the tenth edition of the International Study Days on Francesca da Rimini. The challenge is to tell the story of this woman again in a modern way.

Francesca is no longer a symbol of a mere sinner, but as an ambassador of individual freedom, as a woman, to choose who to love, thus inevitably becoming an icon of gender equality and freedom of choice.

Gradara aims to create a union between the past (Francesca da Rimini as a historical inhabitant of the Rocca) and the present (through the language of street art and the ideology of "Girl Power"). The idea is by the Comune di Gradara in collaboration with the Gradara Innova tourist information centre and under the artistic direction of Sabrina Gennari, with funding from Regione Marche.

Street Art in Gradara: a word from the artists 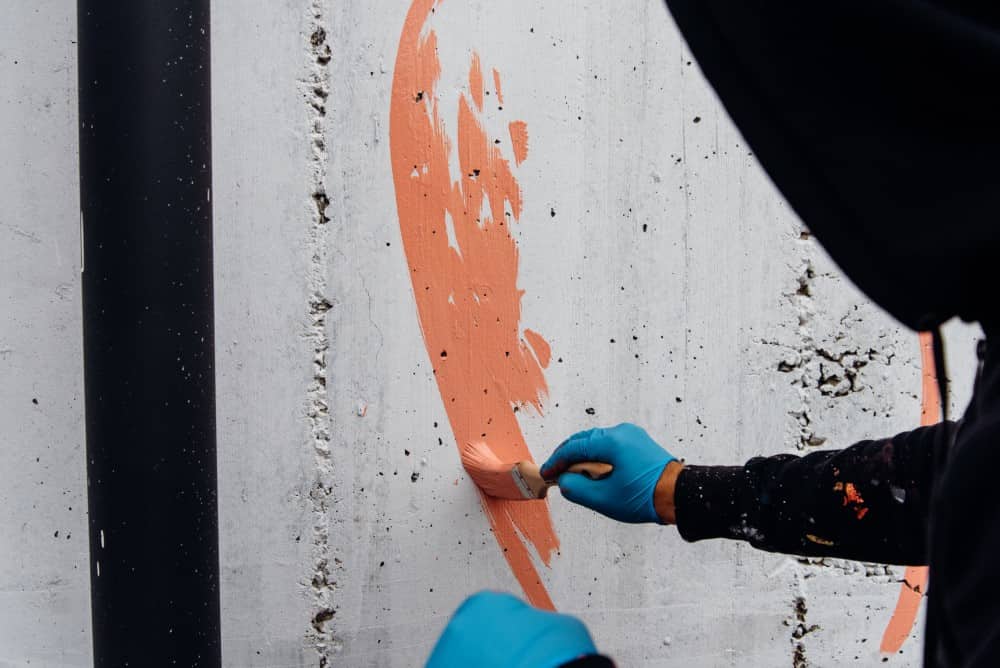 Therefore, the street art of Gradara wants to tell the love story of Paolo and Francesca in a contemporary language and, in particular, to represent the "new Francesca". To do this, six Italian Street Artists, known at the national and international level, have been chosen.

Andreco, Tellas, Gola Hundun, Paolo Psiko, Burla and Finnano Fenno have given their interpretation to the dramatic event and have enhanced the history of Gradara with their works. A veritable open-air museum/trail that has upgraded some forgotten areas of the town: the six pieces are all located outside the walls.

Here is the meaning of the works and where to find them (starting from the castle). 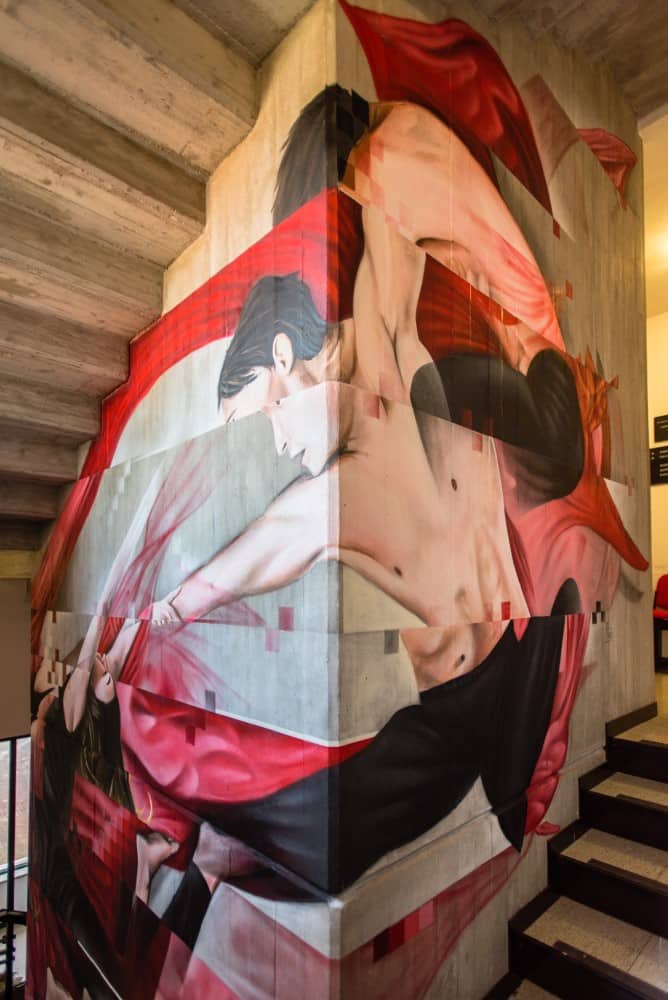 Paolo Psiko's artwork is in the internal staircase of the Gradara Town Hall, just opposite the entrance to the walls. The artist represents Paolo and Francesca as involved in a dance that is a valid symbol of freedom. The body moves to the music and can finally express its inner strength free of all constraints.

Passion is essential for dancing. It is why a red drapery wraps the two lovers. Red has always been considered the opposite of black, and white came to form the medieval triad. Even today, the colour represents love, passion, sensuality and vitality. And it is passionate love that drives us to let ourselves go body and soul with the person we desire, to the point of dying for them. 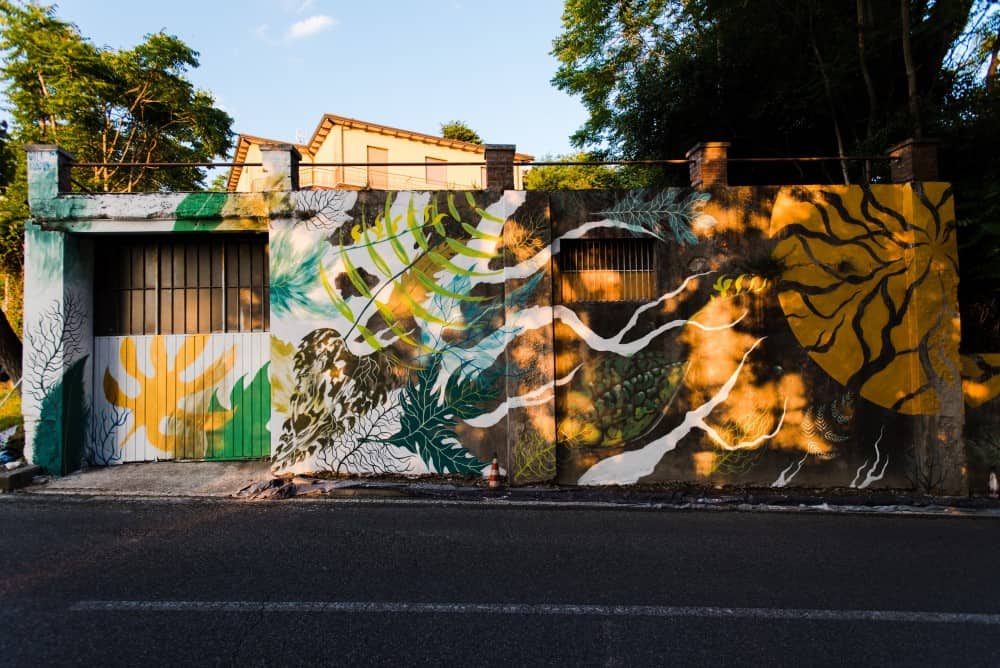 In Gola Hundun's work, the protagonist is natural freedom. This passion permeates Francesca when she decides to choose whom to love. A transposition between the force of nature and Francesca's power.

The passion of a woman who chooses and, in doing so, breaks the mould and social "constraints". The artist represents Francesca as a forest that grows wild and reappropriates what would already be hers by nature. 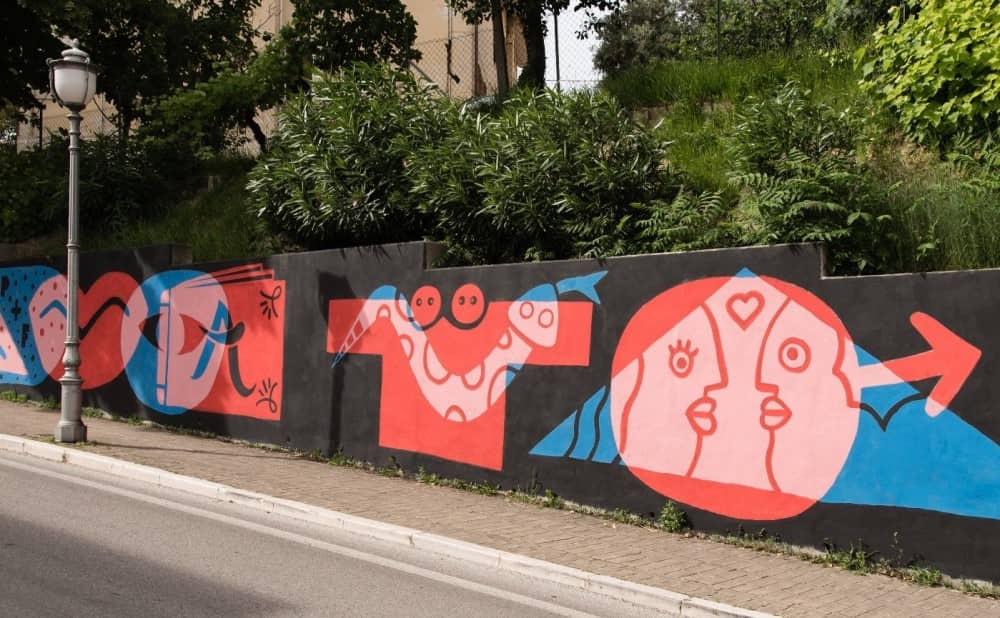 On the first wall of the middle school, the artist Carlo Giardina, alias Finnano Fenno, plays with optical effects and creates an interactive artwork.

Each letter of the inscription represents a symbol of their love story: hell, woman, freedom, Gianciotto's knife, a kiss, tears, sin, the castle of Gradara, emancipation and others. 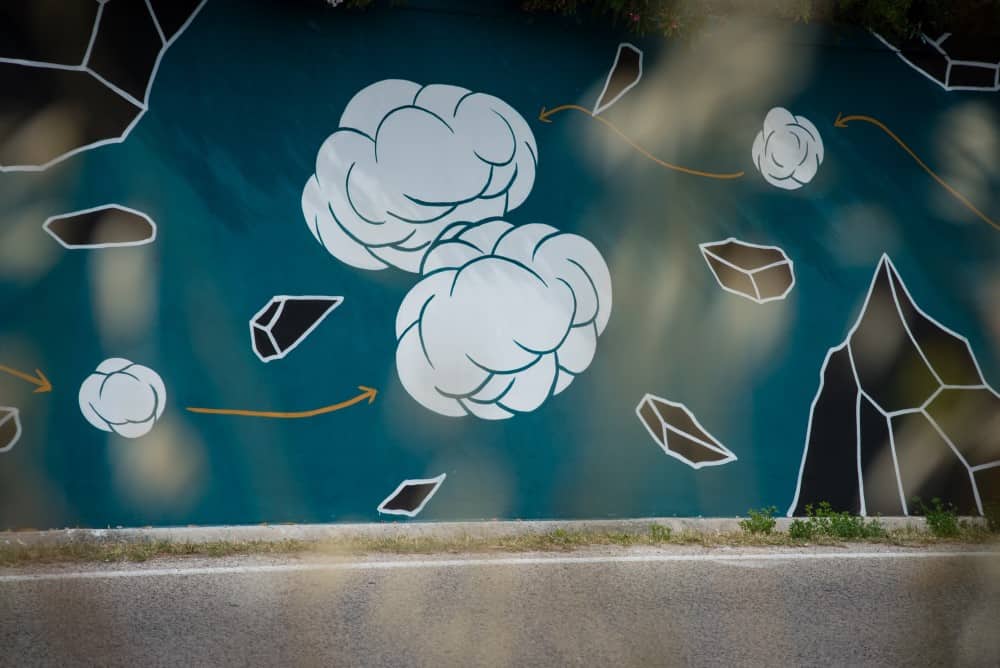 Andreco's work is on Provincial Road 47, at the junction with Via Cattolica. The result takes inspiration from the fifth canto of Dante's Inferno of the Divine Comedy, dedicated to the lustful.

Paolo and Francesca are like two clouds flying close together. The cloud symbolises freedom, and while all the other clouds follow a precise direction, they emerge from the wake. The painting pays homage to actions driven by passion and the desire for freedom.

But there are also many other symbolic elements in work: the Alpha representing the motion of the clouds; the letters P and F representing the initials of the two lovers but also Potere (Power) and Forza (Strength); the letter A standing for Andreco, Amore (Love) and Anarchia (Anarchy); the Rho indicating the physical density linked to the solid-state of the rocks and the gaseous state of the clouds. 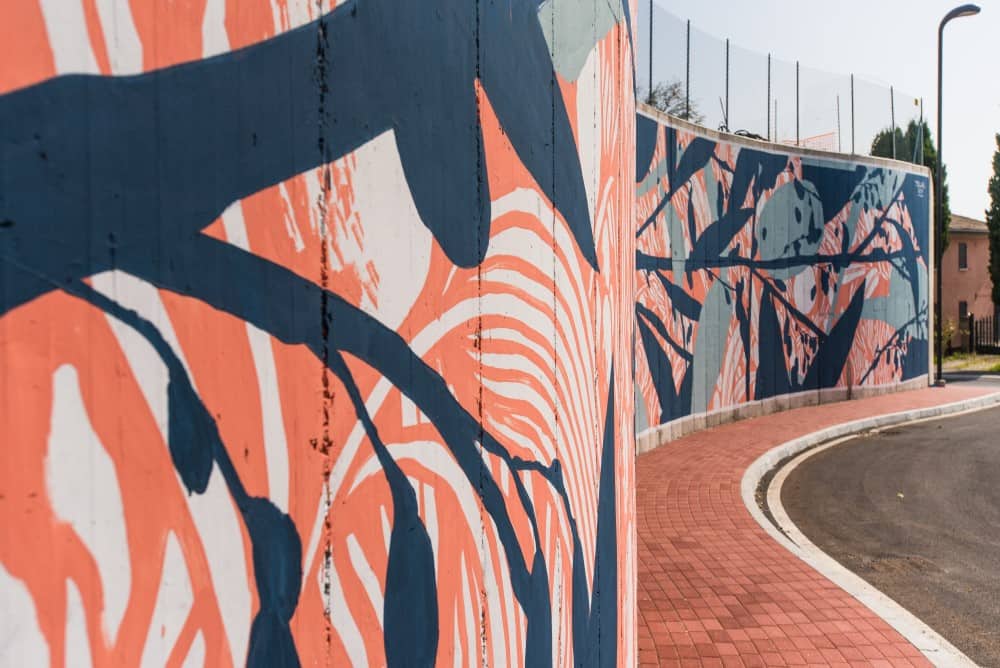 Tellas' work is in the retaining wall at the roundabout intersection of Via Tavullia and Via S. D'Acquisto. Francesca is symbolically on the shape of the native elderberry plant.

This plant is the protagonist of several stories. The elder symbolises betrayal - it is said to have been the plant from which Judas hanged himself - but at the same time, it represents spiritual elevation and purification.

For Tellas, Francesca enjoys the same duality: a woman who betrays but loves and, thanks to this, redeems herself and rises to pure love. 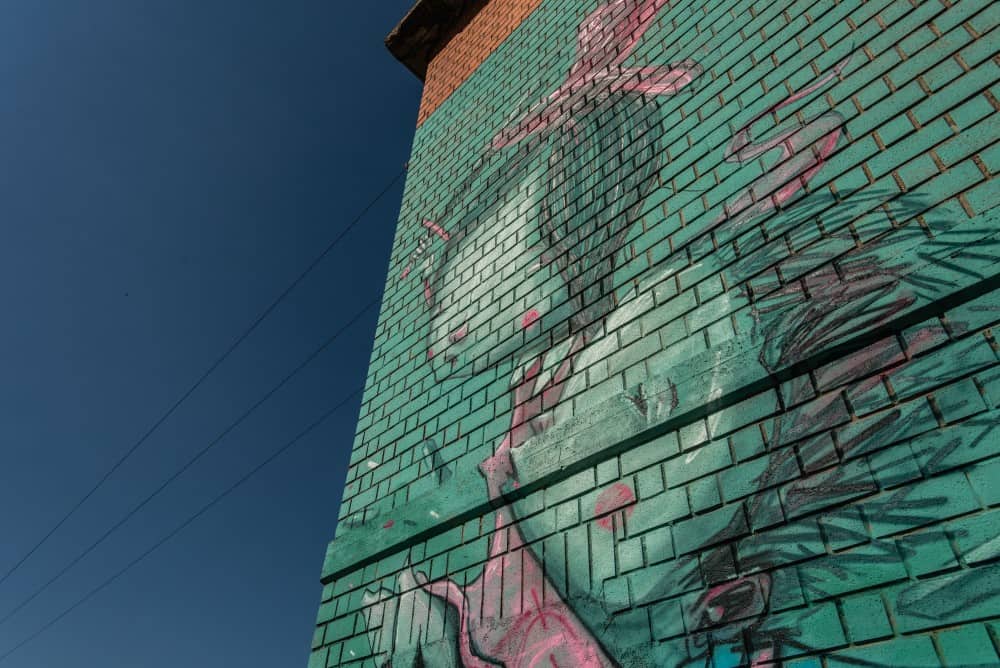 Burla's work is located in Fanano, a hamlet of Gradara, on the Enel tower between Via Raffaello Sanzio and Via Caravaggio. Painted on all four sides of the tower, the artist offers us a version of Francesca as a heroine, self-confident and ready to defend herself and her beloved. She wields a sword and wears a suffragette hat on her head to emphasise her freedom of choice.

On one side of the turret is the inscription "Fight for your rights". There is a castle symbol of construction, norm and form on the back, shaken by a fuchsia tree growing inside it—a sign of girl power that shakes everything up and changes the shape of things.

The Gradara Innova tourist information centre has kindly provided information and photos on the works.