Exploring the amalfi coast: Positano, everything you need to know.

Positano is a jewel set among rocks, with a unique charm and impossible to be confused with other places, it is a holiday place since the Roman Empire, as many scientists had proved various archaeological findings.

On a trip, the destination has massive importance, and it is often a difficult choice, however, do not be afraid, we are here to help you. Today we will talk about one of the most popular tourist destinations in the south of Italy, Positano.
It is a town of the Amalfi coast famous for its narrow streets full of shops and cafes, for its unforgettable sunset, for the scent of citrus, for the pastel colour shades of the houses built in height.
Positano is a jewel set among rocks, with a unique charm and impossible to be confused with other places, it is a holiday place since the Roman Empire, as many scientists had proved various archaeological findings.

«Make room in your suitcase for comfortable shoes, there’s no time to stand still.»

This place is not like the others. Indeed, Positano is not a city which needs to be visited, it needs to be lived, walking throughout the street, visiting shops, reaching the beaches and claiming the high number of climbs and steps.
Of course, there are also some unmissable visits in this journey, such as the Church of Santa Maria Assunta famous mainly for its the dome covered with coloured majolica which with yellow and green colours recall the vegetation of the city. The church's name reminds us of the town, inside the building there is the Black Madonna with the Child in which hides a legend, as follows: the image belonged to a cargo of a ship from the East, and once it came to the bay of the land it could not be taken back to the sea, because of a sudden calm.  While the sailors were busy trying to move and leave, the captain and his men instead heard a voice urging them to drop anchor: "Posa Posa", said the spokesperson, from where the name of the city comes, Positano.
Another peculiarity is that beneath the church were found many remains of a Roman villa which was buried by ash during the eruption of Vesuvius in 79 AD (the one of Pompei).

Where to sleep in Positano? 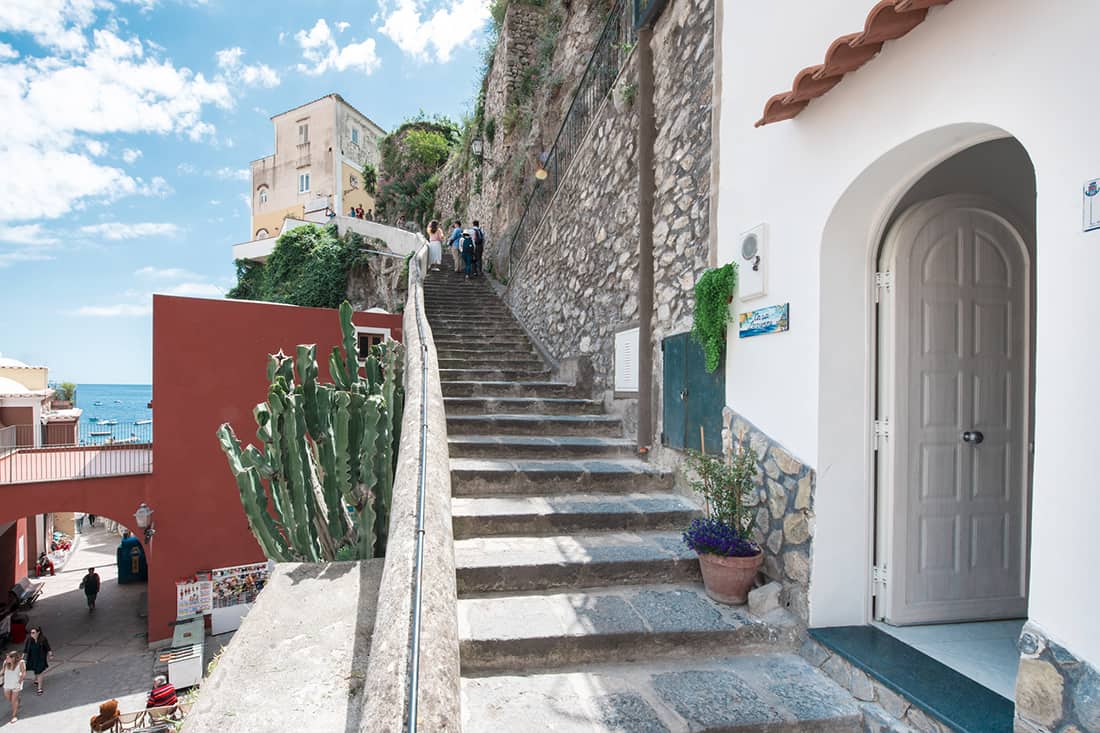 On a trip, the destination is essential, but it is also a crucial choice of reasonable accommodation. Among all bed&breakfast in the area, one of the best is undoubtedly Casa Lucienne. It is situated in the centre of the city, in one of the most car-free famous squares with shops. Therefore, the structure is only a few metres away from many places, such as the sea, the beach, some restaurant and traditional pubs. Casa Lucienne has new and modern furnishings, with a well-organized kitchen and living room, it was planned with three bedrooms, which one of them has a bathroom included. Each room is equipped with air conditioning, free wi-fi, flat-screen TV, and a minibar. However, the place is easy to reach, either by car ( where there can be a chance to park it in a charged private parking area not far away) or by sea. You will be in the area of significant interest, therefore including cultural sites, it is possible to visit the wealthy Roman villa located two minutes away from the apartment and the Church of Santa Maria Assunta. During your stay, the staff will be available to help you organize transfers to Naples, Pompeii, Ravello and other cultural sites; boat excursion along the Amalfi Coast, Capri and custom places.

What to eat in Positano.

The delights of this place are many and do not feel lost if you do not know where to start, we'll help you. Unmissable is the mozzarella in lemon leaves, or pasta to colatura of Cetara anchovies, chocolate eggplant, limoncello and lemon delight with sponge cake soaked into limoncello and over a thin lemon cream frosting.

Do not waste time, Casa Lucienne will be the perfect place for your unforgetttable holiday in Positano. Be curious, and you will not regret it!