Deemed an outstanding example of a Mediterranean landscape by Unesco, the Amalfi Coast is one of Italy's most memorable destinations.

Usually called “Pusitan” in resident dialect, it was named Posidonion by the ancient Greeks (as Poseidon, god of seas). But it’s not only the fabolous coast to attract tourists: here in fact, they can visit several typical churches as Santa Maria Assunta, with its famous Majoloca Dome.

City grows vertically, so a great will to move is needed to visit it: moving around stairs and uphills of Positano is so revealing even a good physical exercise!

A name saying alot is the Pathway of Gods, a panoramic walk in one of the most typical – and charming – stretch of Costiera Amalfitana. Advised stages: Spiaggia Grande and Fornillo. Right here, one of the saracen towers built as fortification to fend against attacks by the sea, whose several witnesses can be found here. 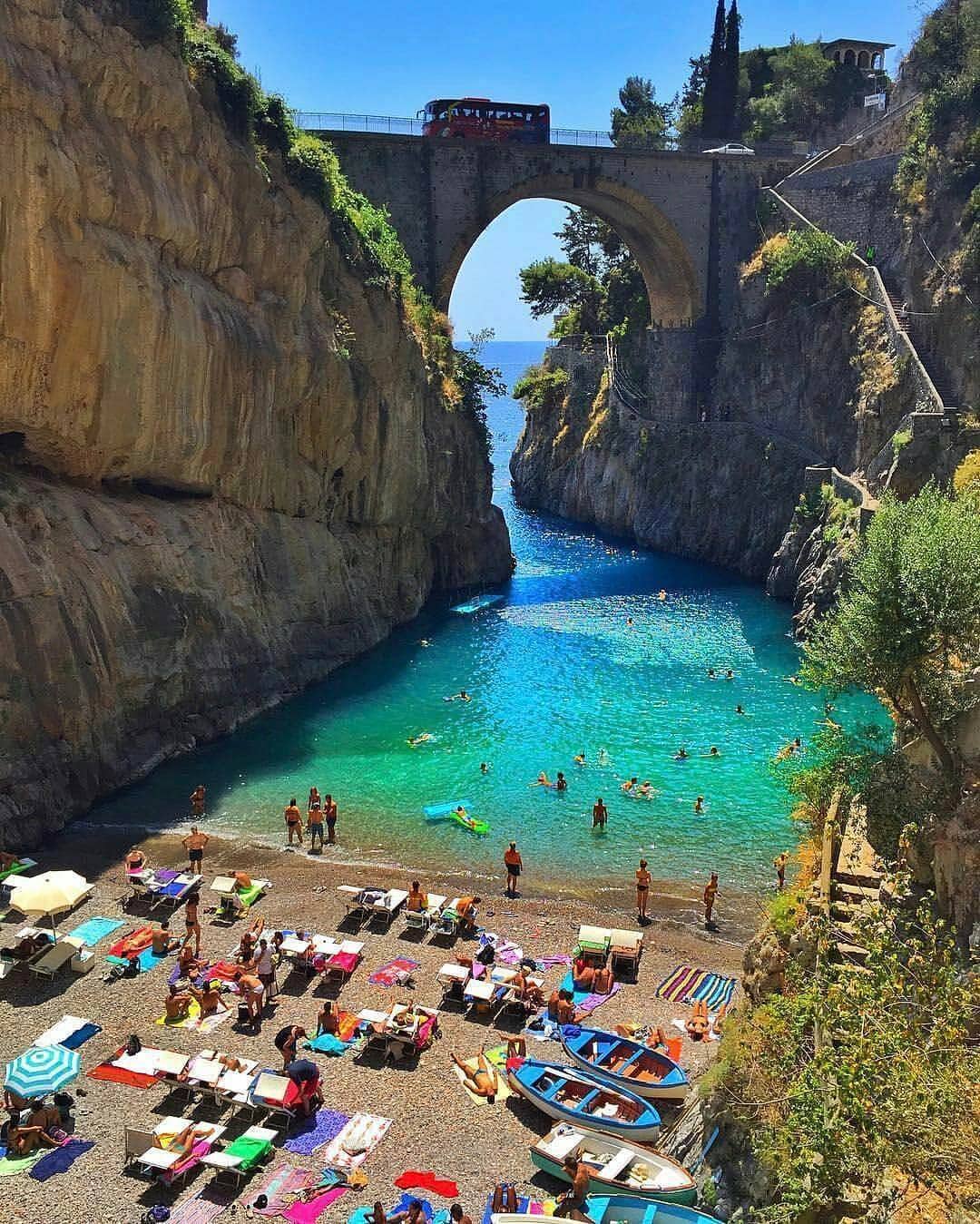 As the whole Amalfi coast, Furore belongs to Unesco World Heritage and even to the “Most beautiful villages of Italy” club.

Territory physical formation is the actual particularity of the village: here is possible to see in fact the only Italian fjord.

The place, once known as “Terra Furoris”, takes its name right by the noise of waves furiously breaking over the reef of the small fjord, overtaken by the highway trough a 30 meters high suspension bridge.

Right here, each summer, is set a stage of the world championships of dives from great heights.

Here you can even visit “Stenditoio” and “Calcara”, two buildings used for the local productions. 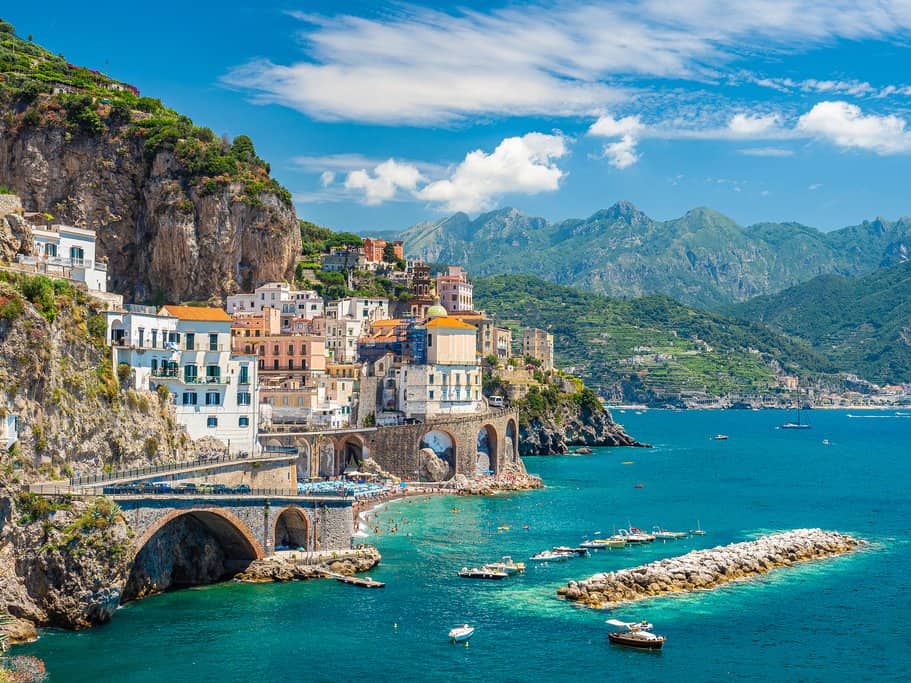 Also Amalfi, of course, is to be included in this list. The town was the oldest of the Maritime Republics. For a long time, it was also one of the stages of the Grand Tour. For this reason, Ferdinando II of Borbone built a coastal road going from Vietri sul mare to Positano.

The Duomo is considered the most important monument of the town. The monument dates back to the 9th century, although, through the time, it has been remodeled over and over again.

Another important testimoniance is the Ancient Arsenals, where the warships of the maritime republic were built. Famous is also Piazzetta dei Dogi, on which the characteristic shops overlook.

In Amalfi there is also the Paper Museum and a long tradition related to the paper processing by hand, the “bambagina”.

Ravello, unlike most of the towns on Amalfi Coast, is not located by the sea. It is in fact positioned less than 10 km from Amalfi, at the foot of Monti Lattari.

Ravello has always attracted large numbers of intellectuals and artists such as Virginia Woolf, Richard Wagner and Winston Churchill.

In piazza Vescovado, Villa Rufolo – built in the second half of 1200 – must be mentioned.

In 1800, the Villa was purchased by botanist Francis Neville Reid, who was responsible for the restoration of the gardens.

Ravello also boasts a beautiful Auditorium and fantastic gardens on the cliffs. 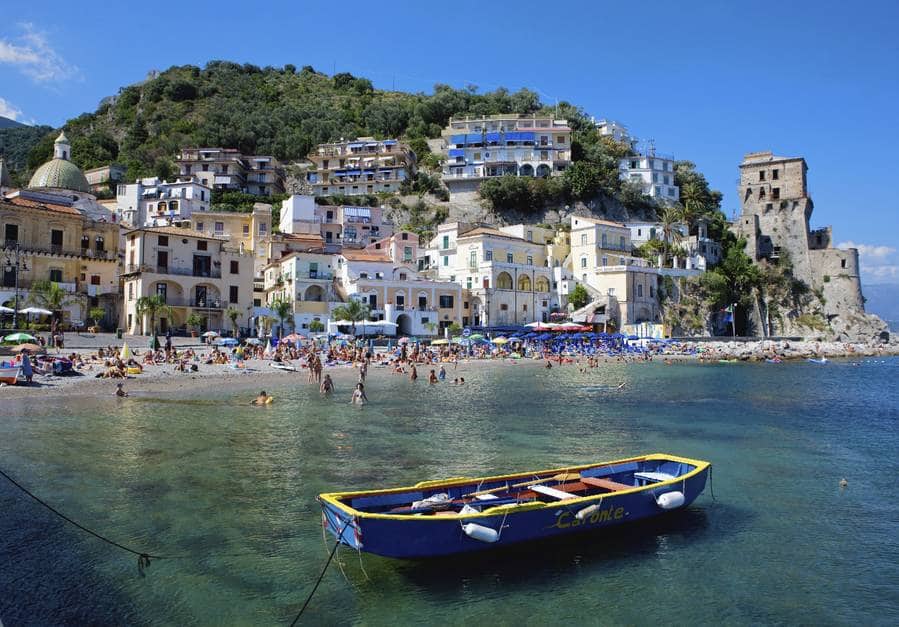 Cetara is located at the foot of the Falerio mountain and stretches out in a deep valley, lined with vineyards and citrus groves.

The name Cetara comes from the latin Cetaria. This small town is traditionally linked to fish processing.

The “Colatura di alici” and the valuable Cetara tuna are appreciated worldwide.

The town is a very characteristic seaside village where admiring fishing boats, traps and beautiful landscapes. 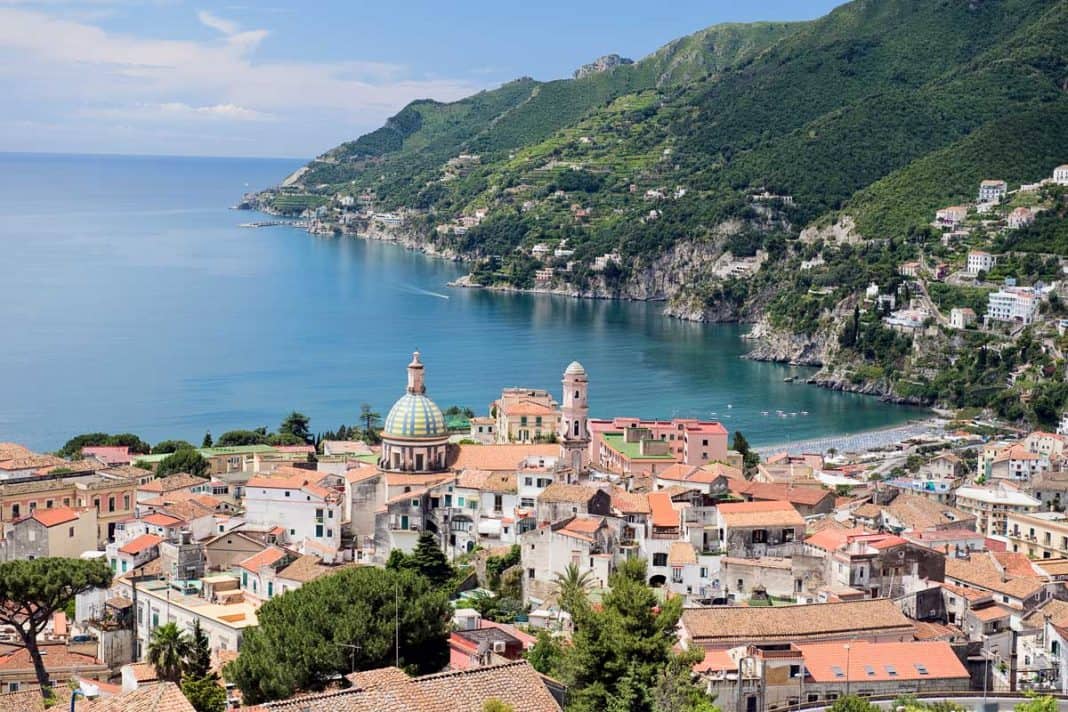 Famous because of richness, charme and luxury, Marcina was even celebrated in ancient times for the cult of arts and development of maritime and land trade.

The place features a massive presence of beaches and coves, dream deastination of a lot of tourists. From the Two Brothers, reefs symbol of Vietri, to Crestarella beaches, with its '500 dated tower, trough Bagnara, Marina d'Albori, Acqua del Fico and Fuenti.

Otherwise the several natural beauties, the city is even known for the handmaking of artistic ceramics. Inside Villa Guariglia is the Provincial Ceramics Museum, where admiring many collectons, from crockery to holy items.

Of course, you can visit the Amalfi Coast in total independence.

Altough, for a more complete experience, it's suitable to rely an experienced tour operators such as AmalfiDriver.

AmalfiDriver has a tour dedicated to the Amalfi Coast, called "Tour Amalfi Coast" consisting of a visit "Ravello+Amalfi+Positano".

AmalfiDriver is known for the friendly relationship established with the customer. They provide a "guide on board" service consisting of giving historical and cultural information on the places visited, together with advice on the most beautiful things to see and places to eat.