7 days in the Marche Region: 7 places to visit

The Marche is a region located in central Italy that presents a perfect combination of places of art, natural landscapes and seaside. Here in this article you will find a 7-day itinerary proposal in this area.

Fermo is a city rich in history, a medieval town that will amaze you. The central square, the cathedral towering over the town, a view from the sea to the mountains and the largest Roman drinking water cisterns in the world after Istanbul. The square is very welcoming with its little cafés and bars.

Several buildings dominate the square: the Palazzo dei Priori, the Loggiato di San Rocco and the Palazzo degli Studi. It is possible to visit the fascinating Roman Cisterns: you can walk in the basement and visit the 30 rooms where the Romans collected water to drink.

Not to be missed is Fermo's belvedere, from where you can enjoy a wonderful view.

Other must-sees in Fermo are the Library with 15,000 antiques and the magnificent 1713 Mappamondo hand-drawn by Amazio Moroncelli, a talented cartographer from Fabriano, and the Teatro dell'Aquila, a masterpiece of the 18th century in the Marche region.

The places of Giacomo Leopardi: here it is possible to visit the places that served as the cradle and inspiration for the famous poet from the Marche region, that is the House of Giacomo Leopardi and the House of Silvia (actually, Teresa) located at the piazzuola of the Saturday of the Village where the homonymous poem was set; the Park of Collo dell’Infinito, from which Leopardi draws inspiration for his famous poem; Giacomo Leopardi Square, enclosed between a coast of the Church of Saint Domenic and the church of Saint Augustine: its bell tower is the ancient tower sung in the Solitary Sparrow. From the Giacomo Leopardi High School it is possible to have a suggestive view of the Conero. Here and there along the streets of the city hang on the walls of the shops, framed by old wooden pallets, fragments of the composer's best known poems.

Loreto is the destination of many pilgrimages due to the presence of the Basilica of the Holy House: in 1291, with Nazareth and all of Palestine under the dominion of the Mamelukes of Egypt, according to the tradition some angels took the Holy House and flew it to present-day Italy. According to some historical and archaeological researches, the venerated Holy House seems to be the abode of Nazareth where Mary was born, educated and received the angelic announcement. After several moves desired by the angels (first in Ancona, then Banderuola) the three stone walls that compose it were transported to Loreto in 1294 when the crusaders were expelled from Palestine. Documents and archaeological excavations confirm the hypothesis that the walls of the Holy House were transported to Loreto on a ship, on the initiative of the noble Angeli family, who reigned over Epirus. From the mid-1400s, to protect these humble stone walls and to accommodate the growing crowd of pilgrims visiting the sacred relic, work began in Loreto for the construction of the magnificent sanctuary. The marble cladding that surrounds the walls of the Santa Casa was commissioned by Julius II and made to a design by Bramante (1507). Later Cristoforo Roncalli painted the Treasure Room and the dome, Francesco Selva who decorated the Atrium of the Sacristy, while Tiburzio Vergelli built the majestic baptistery. Upon completion of the work, Carlo Maderno created in 1600 the fountain that adorns the square of the sanctuary, while in 1700 Luigi Vanvitelli built the bell tower that stands on the left side of the basilica. There were other interventions also in the XIXth and XXth centuries, including, in the sixth centenary of the Translation of the Holy House, the promotion by the Universal Congregation of the Holy House, founded in 1883; of the decoration of seven apse chapels with the offerings of the faithful of a language or a nation. 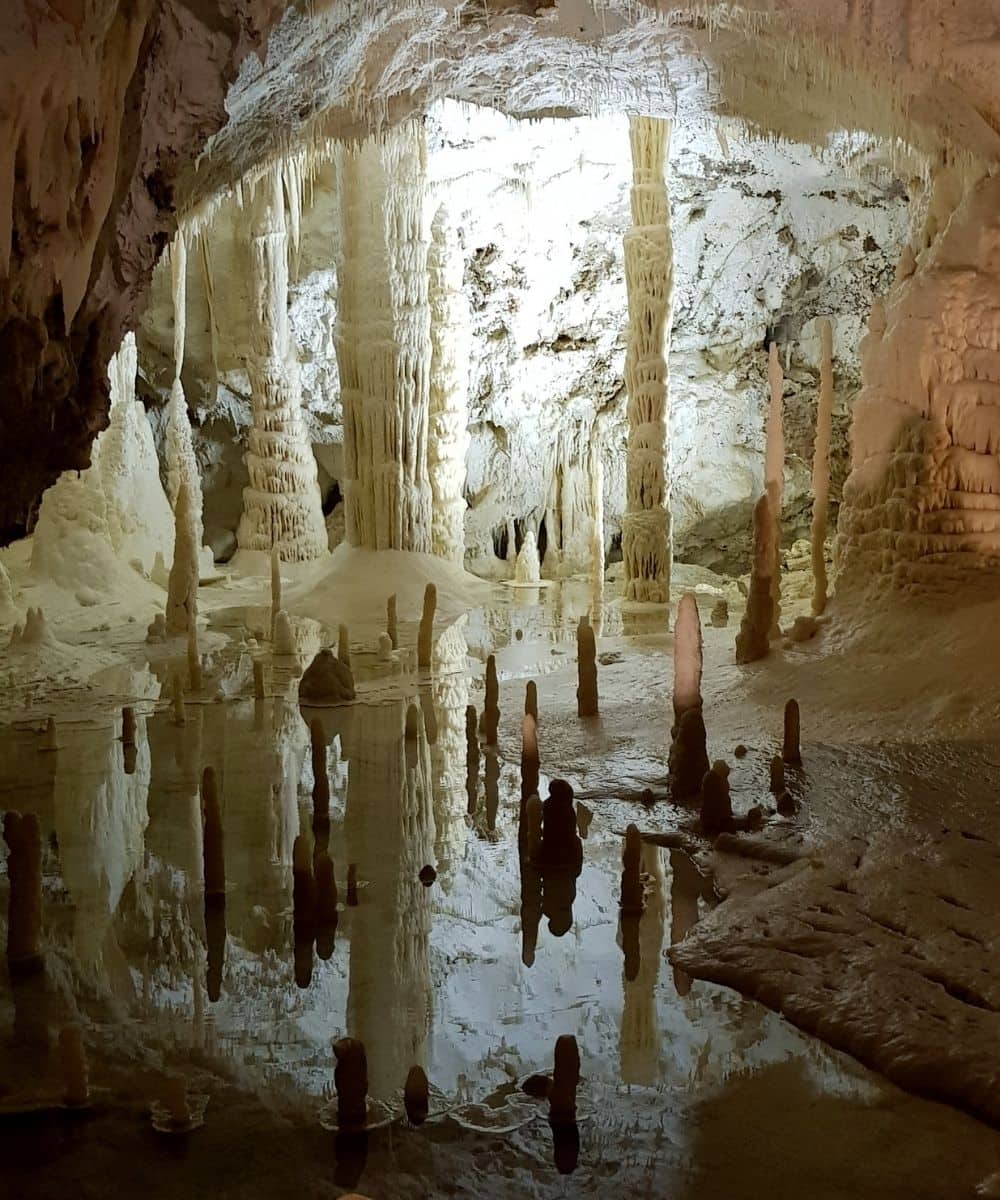 The Frasassi Caves: they are located within the Gola della Rossa and Frasassi’s Regional Natural Park. The entrance to the cave was only discovered in 1948 by the Marchigiano Speleological Group of Ancona and, subsequently, in 1966 and 1971, the branches leading to all the other connected rooms were discovered. These explorations have brought to light new tunnels, shafts and impressive tunnels, for a total of about 5km. It’s a complete underground ecosystem, in which it is still possible to observe the formation of concretions, the drops that dig and build their own architectures and in which life has continued undisturbed for millions of years. The overall length of the Frasassi Caves has been estimated at 30km and its largest environment, the Ancona Abyss, has a volume of approximately 1,000,000 cubic meters, with a height of 240 meters. Two must-haves of the city of Urbino!

The National Gallery of the Marches: housed in the Ducal Palace of Urbino commissioned by Federico Montefeltro, its construction took some time: the most known period is that of the architect Luciano Laurana. With a royal decree of 1921, the National Gallery of the Marches was officially established, and it hosts masterpieces by artists such as Guido Reni, Piero della Francesca and Raffaello Sanzio, as well as architectural wonders such as the Studiolo of the Duke.

The Oratory of Saint John Baptist: the first records of this structure date back to 1365, which indicate that there was previously an hospital and a place of reception for pilgrims. Its construction was completed in 1396 and already in 1416 it was frescoed with stories from the life of Jesus Christ and St. John the Baptist by the brothers Lorenzo and Jacopo Salimbeni according to the gothic-flowery style of the time.

Are you a fan of churches and cathedrals? Here is what you will find in Urbino for you!

The Baptistery of Saint John: in Romanesque style, the structure is based on that of a baptistery of the V-VIth century, In turn, built on the remains of the walls of a Roman pagan temple on the east side: the current structure dates back to the XIIth century. The octagonal shape, symbol of baptism, recalls that of the Arian baptistery of Ravenna. Inside there are traces of a baptismal font from the XIV-XVth century, suitable for baptizing children, which replaced that of the V-VIth century, used instead to baptize adults.

The Cathedral of Saint Emidio: built on the remains of an ancient civil basilica of the Roman forum, the building underwent several adaptations until the XVIth century when the new altar and the facade were built based on a design by Cola dell’Amatrice. Inside there are various works of art and the crypt built-in 1504.

The Church of Saint Mary of Charity: probably built in the XIVth century, it was the former seat of the Confraternity of the Discipline, in fact, the church took on the nickname 'della Scopa (Broom)’ due to the use of broom-shaped whips on worshippers during processions. The work began in 1532 under the direction and design of the architect Cola dell’Amatrice but was only completed towards the end of the XVIIth century, undergoing Baroque influences as the style of the time dictated.

The Gradara Castle: known among literature enthusiasts for being the theater of the myth of Paolo and Francesca, the famous couple of the V canto of the Divine Comedy, at first it was a medieval fortress built in the XII century according to the will of Pietro and Ridolfo De Grifo; later it became the residence of the Sforza family, whose member Giovanni surprised the famous couple mentioned above at the origin of the legend. In the lovers' room it is also possible to observe the dress that actress Eleonora Duse wore in the play 'Francesca da Rimini'. Other points of interest of the castle are the Courtyard of Honor; the Hall of Sigismondo and Isotta, members of the Malatesta family who succeeded the De Grifo family in the XIIIth century; the Room of Passion, Lucrezia Borgia’s Room, the Bishop's Room and the Room of the Cherubs.