If you are a great lover of contemporary art, and you are visiting Italy, here are the places and the cities that I recommend you to explore. Several towns, each with its own charm but all with an extremely contemporary soul. Let's start our wonderful ride adventure!

Milan is a very great city for connoisseurs of contemporary art and architecture. Over time its skyline has enriched by the greatest names of present architecture like Zaha Hadid, César Pelli, Daniel Libeskind, Arata Isozaki and many more. New exhibition spaces have been created, mostly Fondazione Prada and Hangar Bicocca. Fondazione Prada is an institution dedicated completely to contemporary art and culture. From 1993 to today, the Fondazione has organised many solo shows at its exhibition spaces in Milan and Venice, conceived as a dialogue between the public, the institution and internationally renowned contemporary artists. Hangar Bicocca is a site for contemporary art exhibitions, located in the Bicocca district of Milan, Italy. The building used to be a Pirelli factory, where trains were produced. It was converted into exhibition galleries in 2012. The permanent work that will leave you breathless will be "The Seven Heavenly Palaces" by the German artist Anselm Kiefer. Seeing is believing!

Turin is an important commercial and cultural centre in northern Italy. The city has a rich culture and history, being known for its many art galleries, art museums, churches, palaces, theaters, parks, libraries and other places. The main museum of contemporary art is located inside an ancient castle in the nearby city of Rivoli, a short distance from Turin. The peculiarity of the place is the incredible contrast between ancient and contemporary. The castle was probably built in the IX-X century. Morover two important hub of contemporary arts must be mentioned: Fondazione Sandretto Re Rebaudengo and OGR (Officine Grandi Riparazioni, in italian). The contemporary turin will amaze you!

One of the best destination about contemporary art in northen Italy is the Museum of Modern and Contemporary Art of Trento and Rovereto (MART) in the Italian province of Trento. The centre is the main site is in Rovereto and contains mostly modern and contemporary artworks, including works from renowned italian artists like Giorgio Morandi, Giorgio de Chirico, Felice Casorati, Carlo Carrà and Fortunato Depero. Also Fortunato Depero's house in Rovereto (known as Casa d'Arte Futurista Depero) is a part of the Museum. The permanent collection contains more than 15,000 artworks, including paintings, drawings and sculptures. 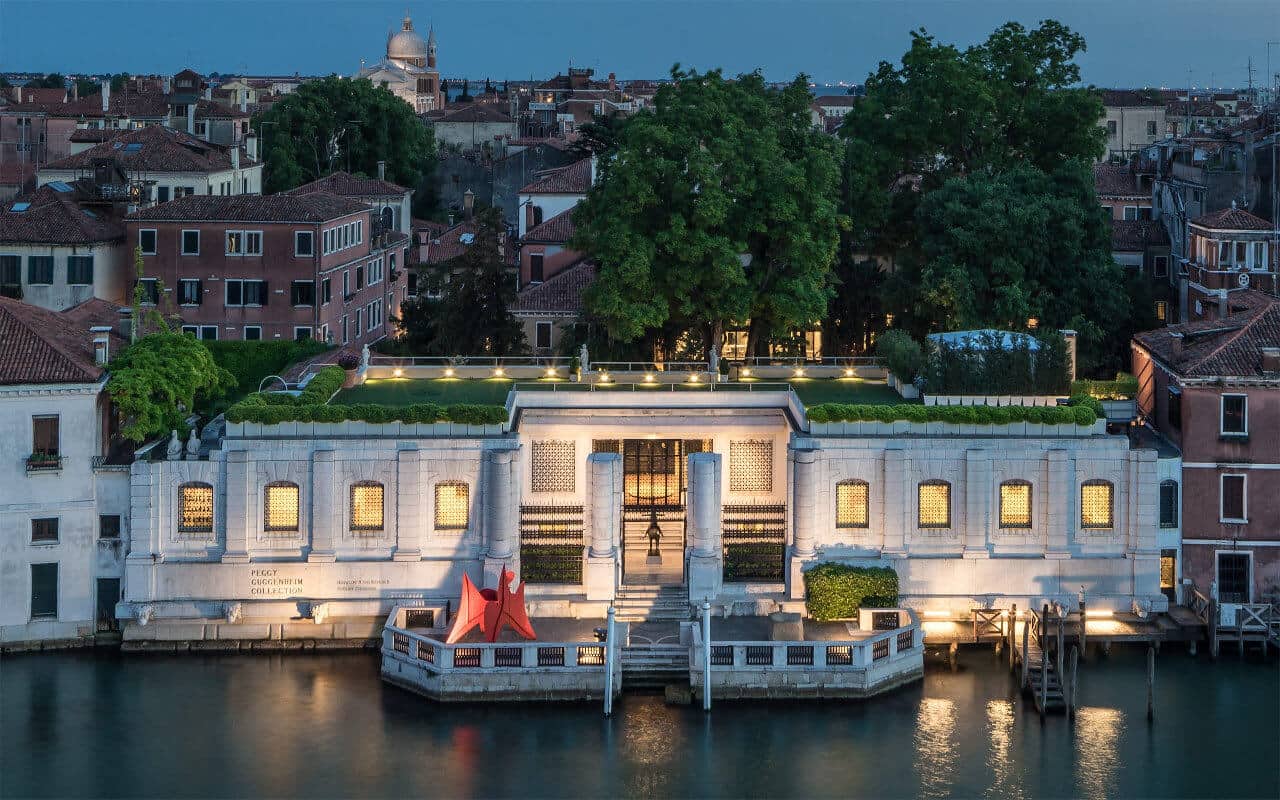 Venice is a very important city for the contemporary, also because it hosts the famous "Biennale" which is the oldest exhibition of contemporary art in the world (opened in 1895).

Also the collector Peggy Guggenheim was in love with the city of Venice, where she lived for most of her life, also creating the Peggy Guggenheim collection.
Now this collection is in "Palazzo Venier dei Leoni", where Peggy Guggenheim lived. An unfinished eighteenth-century palace on the Grand Canal, and today the collection also includes Cubist, Surrealist and Abstract Expressionist works. Picasso, Pollock, Dalì, Magritte are just some of the artists who can be admired there.
Not to be missed is also the museum of Palazzo Grassi, which has collections of great quality and has always hosted great international artists.

On the border with Italy, not too far from Switzerland, there is a magical place famous for its works of contemporary art, born thanks to the Italian collector Giuseppe Panza, one of the most important of the second half of the 20th century. We are now in the city of Varese, where there is "Villa Panza", home to international exhibitions that offer aesthetic and sensory experiences, also suitable for children, thanks to a calendar of activities dedicated to them. Here you can spend a whole day immersed in art and in the immense park full of artworks. Very beautiful and interesting is the interior of the villa, which now houses an extraordinary gallery of site-specific works of art, almost all dedicated to the theme of light. These include the works of Dan Flavin, whose collection boasts the highest concentration of works on permanent display, Robert Wilson, Wim Wenders and James Turrell. Absolutely not to be missed!

In Emilia-Romagna there are two important cities for contemporary art in Italy: Bologna and Reggio Emilia. In the first city there is the Museum of Modern Art Bologna, which houses a very important collection for the history of the '60s in Italy. In the second city, Reggio Emilia there is an important private museum, known as the "Maramotti collection" belonging to the fashion house Max Mara, born from the desire of Achille Maramotti to build a large art collection. Today, this collection houses important Italian and foreign artists belonging to the currents of Arte Povera, neo-expressionism, American new geometry and the experiments closest to the present day. Both are places to discover and not to be missed!

The Luigi Pecci Centre for Contemporary Art is a contemporary art centre located in Prato, near the city of Florence. The center is dedicated to exhibiting the art produced in recent decades. It houses a museum, an information and documentation centre on visual arts and an education department. Initially designed by architect Italo Gamberini, in 2016 it was expanded by Maurice Nio, who designed a U-shaped building with an outdoor amphitheatre seating 800 people. In addition to the permanent collection of contemporary art, the centre includes a sculpture garden and a space for temporary exhibitions. The centre was founded in 1988 by the curator Amnon Barzel and the industrialist Enrico Pecci in memory of his son Luigi Pecci. For An exciting experience with artworld!

Now we are in the capital city of Italy, Rome. The MAXXI (Museo nazionale delle arti del XXI secolo) is a national museum of contemporary art and architecture in the Flaminio district of Rome. The huge and sinuous building that houses the museum, was designed by Zaha Hadid, with whom he won the Stirling Prize of the Royal Institute of British Architects in 2010. It is divided into two major collections: architecture and visual arts. The collections include works by great artists such as Alighiero Boetti, Grazia Toderi, William Kentridge, Kara Walker, Ed Ruscha, Gilbert & George, Gino De Dominicis, Anish Kapoor, Gerhard Richter, Francesco Clemente, Lara Favaretto, Marlene Dumas, Maurizio Cattelan, Gabriele Basilico, Thomas Ruff, Luigi Ghirri, Manfredi Beninati, Vanessa Beecroft, Francis Alys, Carlo Scarpa, Aldo Rossi and Pier Luigi Nervi. One of the greatest contemporary buildings in Italy, in a city dominated by the antiquity. Beyond all time! 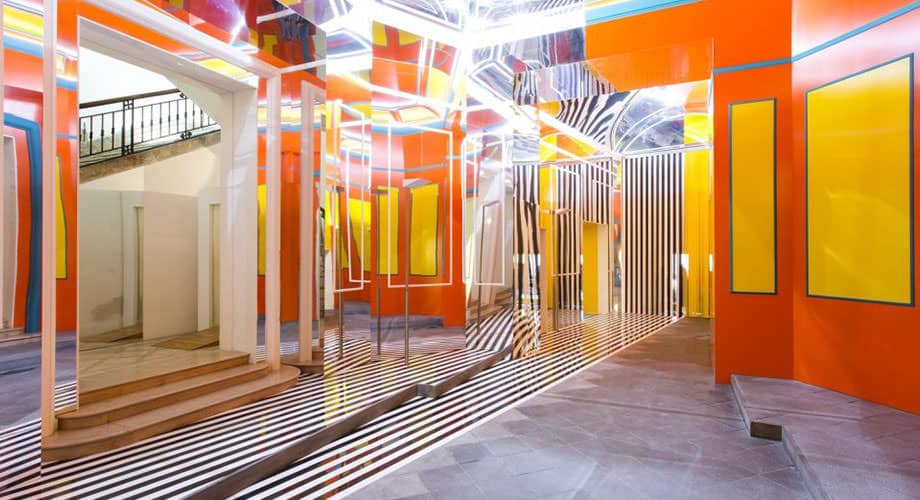 The Donnaregina Museum of Contemporary Art, often known as the MADRE Museum, is a museum of contemporary art in Naples, Campania, in southern Italy. It is housed in the "Palazzo Donnaregina", redesigned for it in a minimalist style by the Portuguese architect Alvaro Siza. The entrance hall was designed by the French artist Daniel Buren in 2015, on the occasion of the tenth year of activity. The museum in fact was inaugurated in 2005. Among the artists represented in the permanent collections are Sol LeWitt, Jeff Koons, Mimmo Paladino, Richard Long, Gilbert & George, Lucio Fontana, Anish Kapoor, Jannis Kounellis, Giulio Paolini, Francesco Clemente, Rebecca Horn, Mario Merz, Damien Hirst and Olafur Eliasson. The museum also hosts temporary exhibitions. The museum is planned on four floors, ending with a roof terrace, where there is Cavallo (Horse), a sculpture by Mimmo Paladino that the museum bought in 2007. You must definitely visit it!

We are still in the south of Italy, in the beautiful city of Polignano a Mare, famous for its caves and its crystal clear waters. It is here that in 2010 was established the Pino Pascali Foundation, dedicated to the Italian artist of the homonymous name. The current headquarters is a restored former municipal slaughterhouse, overlooking the sea, the house on the sea that Pascali wanted so much. The activity of the Foundation moves its steps on the figure of Pino Pascali, one of the most important exponents of Italian art of the sixties, who died at the age of 33 in Rome, a fundamental reference point for Italian art of those years. The Foundation is structured in such a way as to offer a vision of art that is as eclectic as possible and in line with the main avant-garde linguistic research of the moment. In addition to a vast number of works by Pino Pascali, the Foundation exhibits the works of the most significant artists in the area and the works of the artists who won the annual "Pino Pascali Prize".

Matera, in the Basilicata region, is a beautiful territory, famous for its "Sassi", ancient buildings and rock-cut architecture built in the tuffaceous rock, a UNESCO World Heritage Site since 1993. It is in this context that the MUSMA, the Museum dedicated entirely to contemporary sculpture, is inserted. It not only preserves a permanent collection of works of international sculpture, but also hosts temporary exhibitions to study and explore the artistic language of our time. The idea of incorporating the evocative environment of the rock caves as exhibition spaces has deep roots: MUSMA is the result of 30 years of experience of the association "La Scaletta" of Matera which, since 1978, has presented annually the "Great Exhibitions of the Sassi of Matera". The great heritage of experiences, knowledge and relationships built up in this period of time has not been lost, becoming the heritage of all of us.

Our itinerary ends in Sicily, with the great “Cretto“ of the Italian artist Alberto Burri. Although it is not a museum or an art gallery, this place is considered one of the most important destinations for lovers of contemporary art. The “Cretto di Burri“ or “Cretto di Gibellina“, also known as "Il Grande Cretto", is a work of art created by Alberto Burri in 1984 and completed only in 2005, on the occasion of the centenary of the birth of Burri. It is a gigantic monument that retraces the streets and alleys of the old city, and is located in the same place where once there were the different human activities, now cemented and incorporated into the great masterpiece. The original city of Gibellina was completely destroyed by the Belice earthquake of 1968. The city has been rebuilt, about 20 km from its original position. The work is the subject of a short documentary by Dutch director Petra Noordkamp, commissioned by the Solomon R. Guggenheim Museum to be screened at the Alberto Burri retrospective held in New York in 2016. It is to be considered as a mystical place!