The 3rd of June is World Bicycle Day. Here are 5 unmissable bike tours to do in Italy, selected for you.

3 June every year is World Bicycle Day since 2018: it was approved, in a resolution of 12 April 2018, as an official day of the United Nations to raise awareness of the social benefits of cycling as a means of transport and leisure.

Why celebrate cycling? Right on the UN website it says: "Regular physical activity of moderate intensity, such as walking, cycling or sports, has significant health benefits. At all ages, the benefits of physical activity outweigh the potential harms, for example from accidents. Some physical activity is better than none. By becoming more active during the day in relatively simple ways, people can quite easily reach recommended activity levels.

According to the World Health Organisation (WHO), safe walking and cycling infrastructure are also pathways to greater health equity. For the more inadequate urban sector, which often cannot afford private vehicles, walking and cycling can provide a form of transport that reduces the risk of heart disease, stroke, some cancers, diabetes and even death. As a result, better active transport is not only healthy; it is also equitable and affordable."

There is also a strong link between cycling and sustainable development. Cycling is an environmentally friendly means of transport: with modern electric bicycles, it is also possible for everyone to enjoy soft cycling, even those who are not sporty or in top form.

5. Cycling from Bologna, in search of the white stork at the La Rizza Oasis

Emilia Romagna is one of the most suitable regions for cycling enthusiasts. We have chosen an atypical itinerary: in Emilia you will find hundreds of proposals, especially on the Riviera Romagnola where there is the famous and beloved Rimini cycle path.
Ours is a proposal for an itinerary that from Bologna, through the Navile Canal, leads to the La Rizza Oasis, a former rice paddy field redeveloped to recreate the aquatic environments typical of the plain. An ecosystem where many species of wild birds live together: from the kingfisher to the grey heron, from the mallard to the majestic white stork.
The Navile Canal is the main evidence of the artificial water system that has crossed Bologna for centuries. Along the route, which is very picturesque, you can see the old locks called "Sostegni", used in the past to make the canal navigable. The lock known as the Battiferro is attributed, according to some, to Leonardo da Vinci, and the water was also used as a source of energy to run numerous mills, move people and goods and irrigate the land. A route that offers glimpses of nature and history of rare beauty that can be travelled by bicycle.
At the 'Sostegno' of Castelmaggiore we leave the left-hand embankment of the Navile and continue along minor roads to S. Marino, as far as Bentivoglio, where there is a magnificent historical complex and its castle, the hunting and leisure residence of Giovanni II di Bentivoglio. We continue along the right bank of the Navile to arrive at the "La Rizza" Nature Oasis. The beautiful white stork has returned to nest here after centuries.
On the return journey, we pass through Castagnolo, Funo di Argelato and Trebbo di Reno.
Length of route: about 52 km Type of road surface 75% asphalt Recommended bicycles: mountain bike or city bike Difficulty: 2 out of 5

In Piedmont, cycling "is at home". Road cycling can be practised with great fun almost all over Piedmont.

Cycling slowly along the paths along the streams and through the greenery of our valleys, surrounded by the thousands of rustling sounds and colours of a land pulsating with life and intoxicated by the scents of rare flora, will be a pleasure that will remain in your memory for a long time.

In addition to cycle tourism, you can stop at the Museo dei Campionissimi in Novi Ligure, which celebrates the legends of Italian cycling, Fausto Coppi and Costante Girardengo.

A perfect test for those who want to try one of the most characteristic cycling routes is the ascent to Colle delle Finestre, an itinerary in Piedmont that is tackled from the northern side of the pass: it is a demanding and technical climb, 16.9 km long (average gradient of 9%), made famous by the Giro d'Italia because it is very spectacular.

When you cycle between the Langhe and Roero, forget the plain: it's either uphill or downhill. We are in the beautiful area of Alba, in Piedmont. There is, however, one very advantageous aspect in these parts: a common feature of these areas is the low level of traffic which, combined with an asphalt surface that is generally in excellent condition, offers the possibility of looking around. And particularly appreciate certain itineraries and unique views. This is a very interesting itinerary for connoisseurs and not suitable for cycling beginners.

Here are just some of the naturalistic and enogastronomic mountain bike itineraries possible in the Langhe:

- On the roads of Barolo with Rossi, La Morra, Alba

- On the borders of the Alta Langa with Sinio and Montelupo

- Along the Tanaro river towards the lands of Barbaresco with Alba, Altavilla and Barbaresco

In these itineraries, nature and gastronomy are in perfect symbiosis.

3. An itinerary in Umbria: Corciano and surroundings by bike 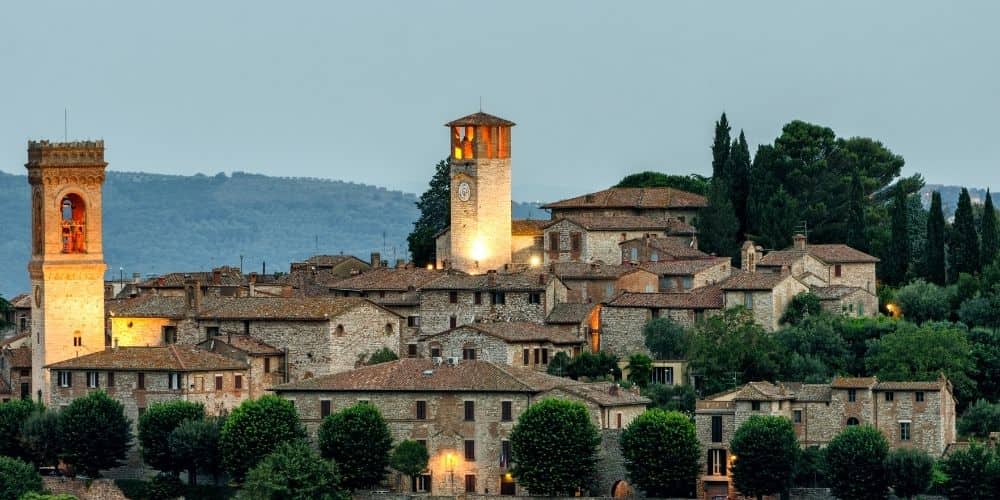 There are hundreds of itineraries in Umbria. We have chosen one that represents authentic and little-known Umbria.

The suggested itinerary starts from the walls of Corciano, a fascinating medieval village, rich in history and rising 408 metres above sea level, among castles and wooded areas that will leave you breathless on an easy route suitable for everyone.

From the walls of Corciano, the characteristic village of Migiana, you can see the ancient and imposing castle of Pieve del Vescovo. After pedalling through fields and farmhouses, you come to the magnificent view of the Villa del Colle del Cardinale and then, after a long ride through Canneto and a glimpse of Monte Amiata, you find yourself back in Corciano.

In the centre of the town you can see the tower of Porta S. Maria, Piazza Coragino with a beautiful 16th century well, the Palazzo Comunale, the Palazzo del Capitano del Popolo and the Palazzo dei Priori, the parish church of S. Maria Assunta, which houses the painting of the Assumption by Perugino (1513) and the Gonfalone by Benedetto Bonfigli painted in 1472.

One kilometre from Corciano, the Castello di Pieve del Vescovo is worth a visit. This fortified building has a quadrangular plan with an internal courtyard and four corner towers.

It was built around the 13th century, but was transformed into a noble residence between 1560 and 1570. The large wooded area of Monte Malbe, which extends above the town of Corciano. The fortified castles of San Mariano, Solomeo, Chiugiana, Mantignana and Capocavallo, all within a few kilometres of each other, which still retain their ancient appearance.

Do not miss one of the best bike tours in Italy: "Garda by Bike", a 140 km long cycle path around Lake Garda.

This is a cycle path with a breathtaking view of Lake Garda: an exclusive path that circumscribes the lake and gives the possibility to see a panorama that cannot be seen in any other way. It runs parallel to the main road for part of the route, but at various points and for several kilometres, when there are tunnels, the path continues over the lake.

The new cycle path is wide and also suitable for families, without steep climbs and with clearly marked bridges. The route with a wooden traffic island is suitable for all types of bicycle. In addition to cyclists, pedestrians will also enjoy the beautiful landscape and elegant architecture - they will be impressed by the new cycle path.

As described in turismofvg.it, the Alps-Adriatic Cycle Route is a fascinating route from the mountains to the sea, passing through the most beautiful places of the region.

The Alpe Adria Radweg CAAR project is an example of cross-border cooperation for the development of sustainable mobility and stems from the common will of the three participating regions (Region Friuli Venezia Giulia, Land Salzburg and Land Carinthia) to identify a cross-border bicycle route that, connecting Salzburg with Villach, Udine, Aquileia and Grado, crosses the physical border represented by the Alps and creates a direct connection between the Central European bicycle network and the Adriatic Sea.

The route is divided into three sections:

The route can be covered in one week.

You travel between bridges, mountains and hills in the extraordinary nature of Friuli Venezia Giulia. It is possible to stop in small towns such as Venzone or Gemona to taste typical products and enjoy a moment of relaxation in the small villages.

Udine is also a very beautiful city to visit with a long history: among the "must-sees" of the city there are the Castle and the Cathedral of Udine, the matriarchal palace and the diocesan museum and finally a very special botanical park such as the Parco del Cormor.

Another possible stop is Strassoldo Castle and the UNESCO World Heritage Sites such as Aquileia and Palmanova. Last stop: the sea of beautiful Grado.