Etna: the characteristics of its territory and its excellent wines

The Etna DOC label is one of the most important in Sicily's wine tradition. Created in August 1968, it grows along the slopes of the volcano Etna, whose properties give the various vineyards a series of peculiar characteristics. Let's discover the Etna wines and vines and the qualities that make them unique!

Characteristics of the territory

The particular conformation of the land in lava stone gives the resulting wines a rich and full flavour, characterised by a slight sapidity. Thanks to its soil and climate, the Etna region can be defined as "an island within an island". The ground is rich in elements of a volcanic nature (ash, sand, lapilli and pumice) that allow high-quality grapes to be obtained. Etna's vineyards are among the highest in Italy and the world. New methods are being tested to assess their effects on winemaking in lava soils.

The innovation of new techniques meets with the traditional methods of terracing and the so-called bush-trained vines. The altitude at which these wines grow and are born has given rise to one of the most celebrated and world-renowned wine productions. In fact, despite the numerous changes that have taken place in winemaking methods, viticulture, the wine market and consumer preferences, the regulations of the Etna DOC label have remained unchanged over time.

Between Castiglione di Sicilia and Randazzo, passing through Catania and Acireale, are the main vineyards of Etna. For Etna Rosso (Etna red), the most common and most widely produced, grapes of the Nerello Mascalese variety prevail, with up to 20% Nerello Cappuccio added. It is a dry red, with a ruby colour and intense aroma. It is a wine around twelve and a half degrees that should be paired with full-bodied dishes such as first and second courses of meat.

Etna Bianco DOC is composed of at least 60% Carricante grapes, combined with Catarratto, the most widespread white grape in Sicily, and other varieties in smaller quantities. It has a fresh, dry flavour and goes well with any fish dish.

In Contrada Valle Galfina (CT), the Sciglio family has been dedicated to the winemaking of Etna wines and extra virgin olive oil for five generations. At Tenuta Sciglio, cultivating and producing organic wines means taking care of the vineyards so that they preserve all the specific properties of this territory. The many visitors can enjoy Etna Doc certified organic wines and experience a unique holiday at the Valle Galfina Resort, located right inside the wine estate. The estate is also an ideal starting point for visiting the volcano Etna, Taormina and the areas of Catania and Syracuse! 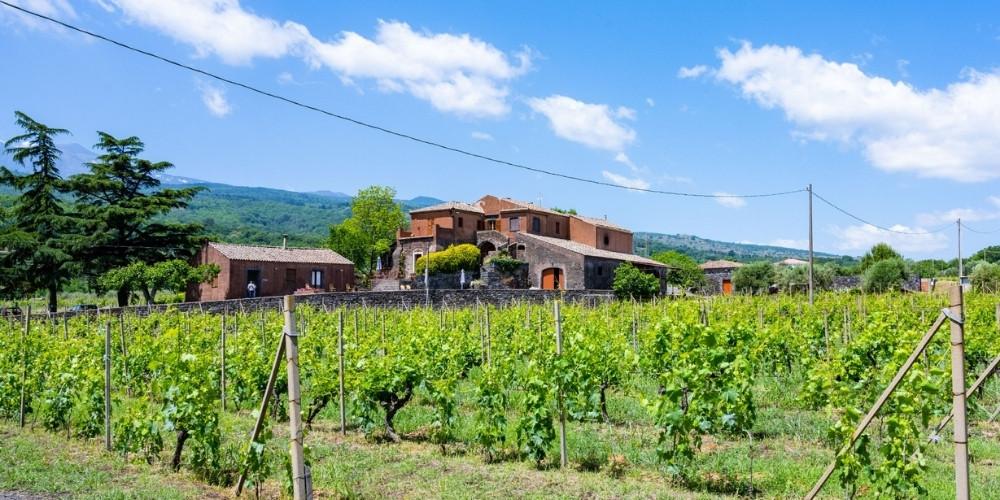 Valle Galfina Resort is a renovated old farmhouse surrounded by terraces of vines and olive trees. Its spacious rooms, arcades and large open spaces reflect Etna's rural architecture. However, there are also modern elements such as an outdoor swimming pool and rooms equipped with every comfort. The restaurant of Valle Galfina Resort offers typical and refined dishes prepared with products from the Etnean and Sicilian territory. The Scilio family welcomes you into their home to give you an experience of relaxation, authenticity and taste.