10 things to see in Venice in a day

Ten must-see places to visit in one day to discover the true essence of Venice. Let's discover them together!

Just by taking your first step outside the entrance to Santa Lucia Railway Station, the sight of the majestic green dome of the Church of San Simeon Piccolo will leave you breathless. And so it is Venice, a surprise, a wonder at every step, around every corner, whether it is the first or the thousandth time you visit it. The magical atmosphere you breathe in this city, both in winter and in summer, is what makes every stay here unique. To visit and get to know every side of the city, one day is obviously never enough: Venice is a city that you have to savour in small bites. However, for a perfect day out in La Serenissima, there are some places that should not be missed on your itinerary. So pack a pair of comfortable shoes for this trip "up and down" the bridges of Venice. 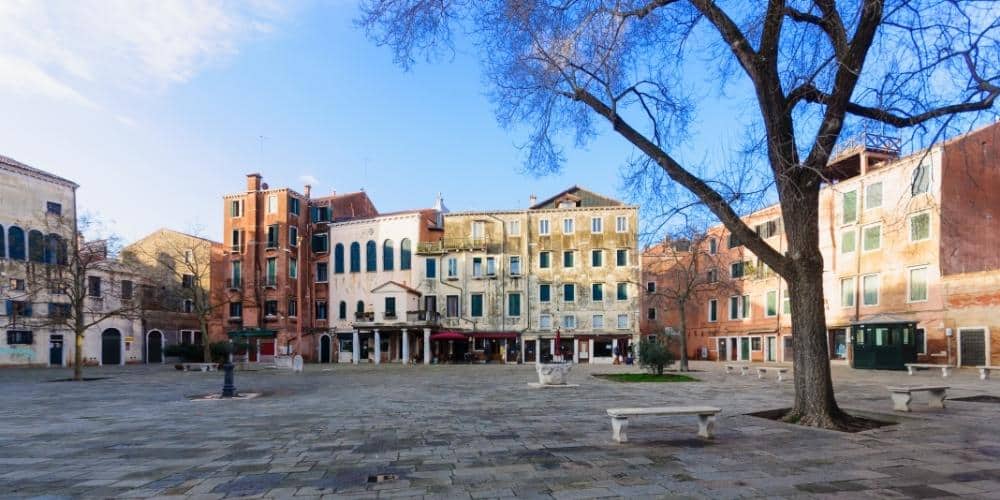 The main square in the Jewish Ghetto

Crossing the Ponte delle Guglie (bridge), not far away from the train station, you will arrive in one of the most beautiful areas of the city: the Jewish Ghetto. Located in the Cannaregio district, this area was the first Jewish ghetto in history, and the term is now in use in all languages. The heart of the ghetto is undoubtedly the Campo del Ghetto Nuovo, which is accessed by a magnificent cast-iron bridge surrounded by two symmetrical red brick sentry boxes, a symbol and reminder of the forced isolation and surveillance; in fact, the ghetto had to be closed at sunset by heavy gates that were then reopened at dawn, as during the night no Jew was allowed to leave their area and move freely in the rest of the city. Today, the entire area is an attractive place of study and culture where there are still five synagogues, known as Schole. 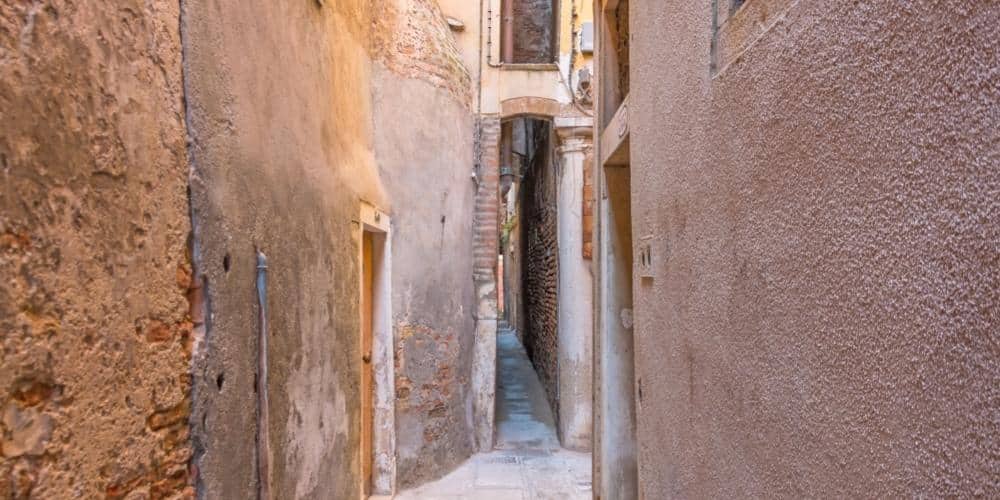 The beginning of the narrowest part of Calle Varisco

Venice is a maze of long, narrow streets, called calli, but one in particular holds the record for being the narrowest calle in the city. We are talking about Calle Varisco, not far from Campo San Canzian in the Cannaregio district. With its maximum width of 53 cm, it allows only one person to pass at a time. A Doric column marks the beginning of the narrowest part of the street. Passing between its narrow walls will surely be a unique experience that can only be done in this city! 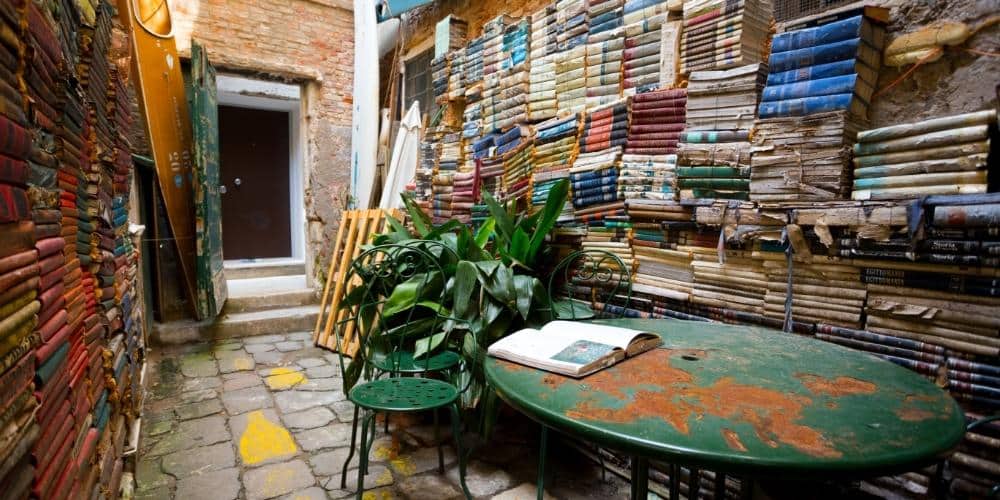 One of the courtyards of the Acqua Alta bookshop

Between the Cannaregio and Castello districts stands an enchanted place, a bookshop unique in the world, not by chance included by the English broadcaster BBC among the 10 most beautiful bookshops in the world: Libreria Acqua Alta. What makes this bookshop special is certainly the arrangement of the books, which are stored inside gondolas, boats and basins, so as to be protected in case of high water, among whose piles sweet kittens tenderly rest. Another characteristic of the shop is the staircase of books inside the courtyard, from the top of which you can admire a suggestive view on the canals of Venice. All you have to do is venture into this bookshop to be transported into a magical world. 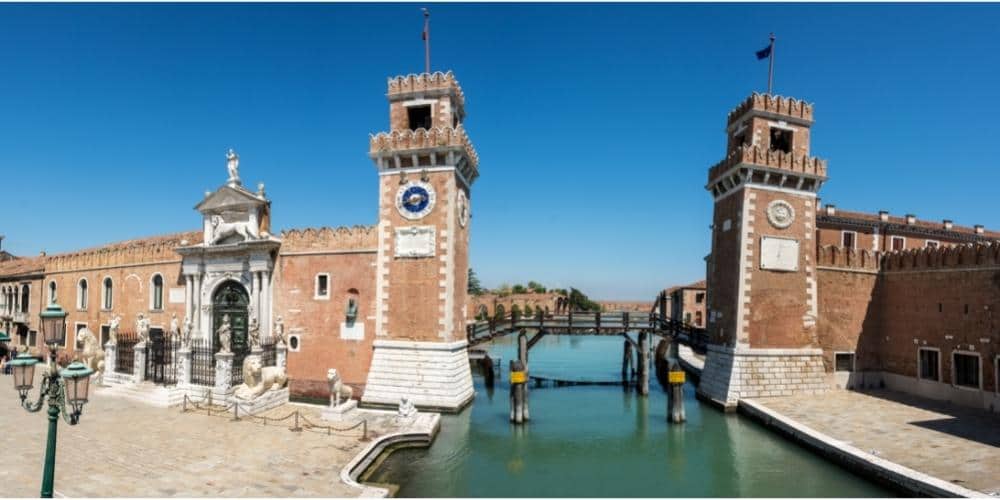 The Venetian Arsenal is an ancient complex of shipyards and workshops that makes up a very large part of Venice, about 48 hectares, where the fleets of the Serenissima were built and, therefore, a symbol of the economic, political and military power of the city. To reach this place rich in history you have to venture through the streets of Castello, the easternmost district of the city, which is one of the areas of Venice less visited by tourists and therefore also one of the most authentic. From Ponte dell’Arsenal (or Paradise Bridge) you can admire the monumental entrance to the Arsenal and its two towers. Since 1980 the Arsenal has housed some exhibition of the Biennale and inside it there is also the Naval History Museum. 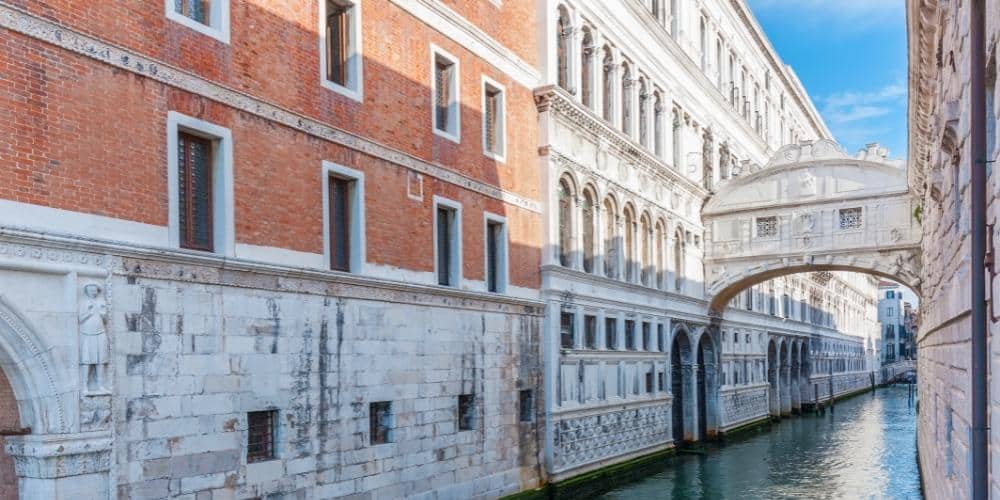 The Bridge of Sighs

One of the most mysterious places is the famous Bridge of Sighs, near St Mark's Square. Built entirely in Istrian stone and in Baroque style, the bridge was erected to connect the Doge's Palace to the New Prison by a double passage. It served as a passageway for inmates from these prisons to the offices of the State Inquisitors. Both sides of the bridge are visible and can be seen from the top of two other bridges, Ponte della Paglia and Ponte della Canonica. The two peculiarities of this bridge are its shape and name; legend has it that prisoners would sigh as they crossed the bridge, perhaps seeing the outside world for the last time. 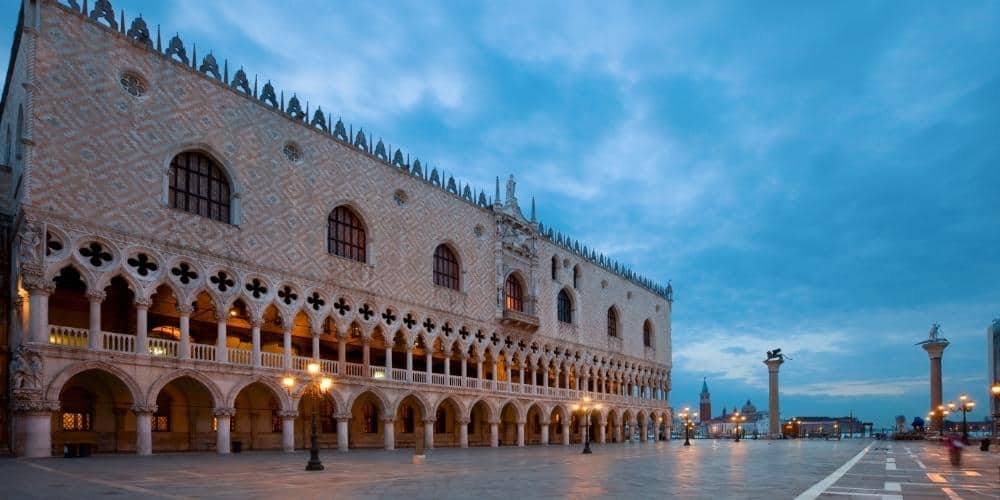 After crossing the Ponte della Paglia and admiring the famous Bridge of Sighs, on your right you will find the immensity of the Doge's Palace. A masterpiece of Venetian Gothic architecture and one of the symbols of Venice, the monumental Doge's Palace was the residence of the Doge and of the Venetian magistracy, from its construction until the fall of the Republic. The palace houses the Doge's Palace Civic Museum where you can admire the works of extraordinary Venetian artists such as Titian, Tintoretto, Veronese and many others.

4. St Mark's Square and its monuments 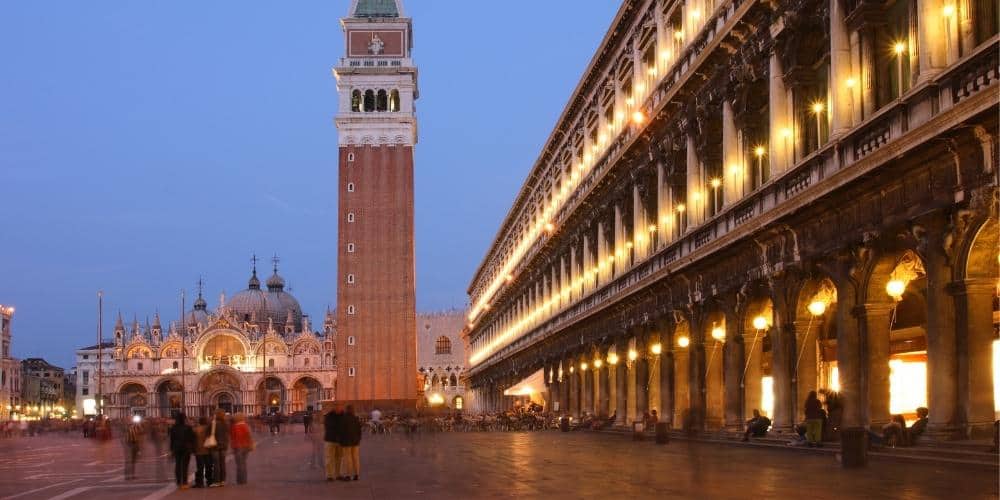 Very close to the Doge's Palace you will find yourself in the beating heart of the city: St Mark's Square, the living room of the world, the most beautiful and best known public square in Venice, which since the times of the Serenissima has hosted all the most important public and social events of the Republic. The square is home to St Mark's Basilica, the enchanting testimony to the magnificence of the Republic of Venice and the religious symbol of the city. Moreover, from here stands the most recognisable landmark and symbol of Venice, the majestic St Mark's Campanile. Furthermore, the square is surrounded on three of its sides by the Procuratie, imposing buildings typical of the Venetian environment that today house some of the city's most important museums, such as the Correr Museum, the National Archaeological Museum and the Monumental Rooms of the Marciana Library.

FURTHER INFO ABOUT THE VENICE PASS❯ The view from Ponte dell’Accademia

The Ponte dell'Accademia is one of the four bridges in Venice that allow people to cross the Grand Canal. This bridge was built during the Austrian rule and opened to the public in 1854; until then the only pedestrian crossing point on the Grand Canal had been the Rialto Bridge. Over time it underwent several changes due to the danger and the problems of the initial iron structure, so that it was decided to demolish it and replace it with a temporary one made of wood and steel, which has remained until today. From the top you can enjoy a wonderful view of the Grand Canal and the Basilica of Santa Maria della Salute. 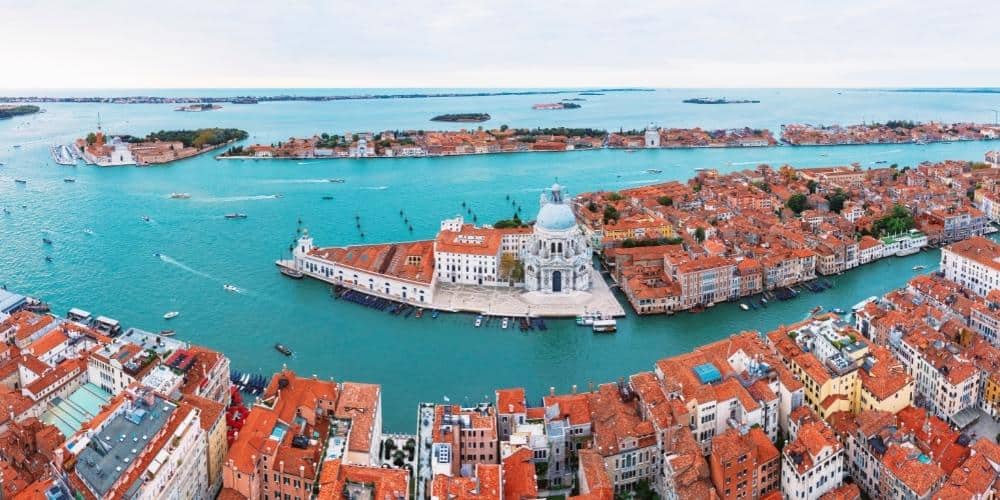 Punta della Dogana from above

Located in the Dorsoduro district, Punta della Dogana is a thin triangular area stretching between the Grand Canal and the Giudecca Canal, from where you have a complete and breathtaking view of the Doge's Palace, St Mark's Campanile and the Church of San Giorgio. This area is also home to the most important church in Venice, after St Mark's Basilica: the Basilica of Santa Maria della Salute. We advise you to wait here for the sunset, to see the whole basin of San Marco turn golden. 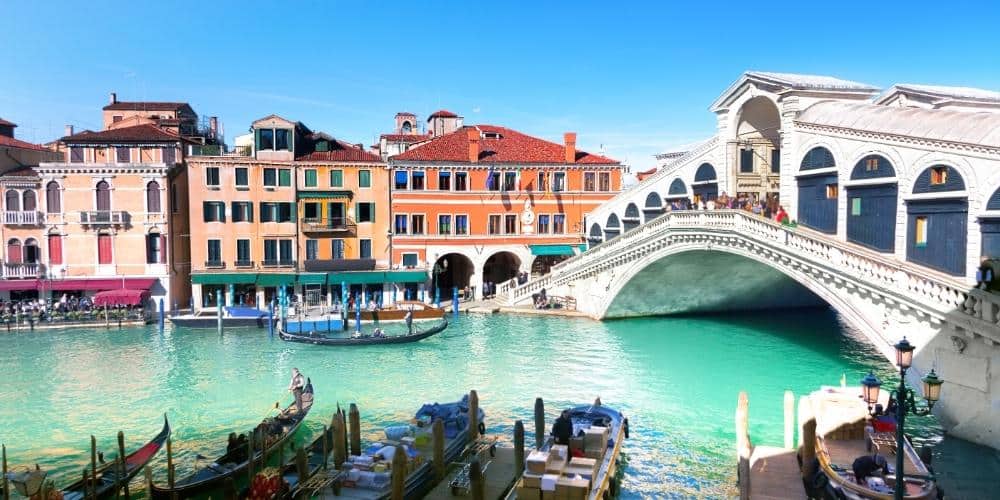 Last but not least, we find the most famous bridge in Venice and one of the most well-known bridges in the world: the Rialto Bridge. The first of the four bridges crossing the Grand Canal to be built, the Rialto Bridge has a single arch and is made of white stone. It is divided into three flights of stairs, one central and two lateral, divided by two rows of barrel vaults housing 24 shops. How could you not want to end your day in Venice with an evening stroll along the Rialto steps, seeing the lights of the city reflected in the Grand Canal.