What to see in the Marche: ten unmissable places

Literary cities, historic villages, enchanting landscapes and unique natural spectacles: come with us on a trip to the Marche region!

Although small in size, the Marche region offers a wide range of attractions that make it an unmissable destination for your trip to Italy. Natural beauties, priceless artistic treasures and works of human ingenuity are just waiting to be discovered, admired and contemplated.

Visit Italy has prepared a tour that will take you on an extraordinary adventure through the most beautiful places in the Marche region. Are you ready?

Your tour of the Marche region starts from above. The first stop is Mount Conero, in the province of Ancona, at more than 500 metres above sea level. This promontory juts out majestically into the Adriatic Sea. It is characterised by spectacular overhangs and limestone cliffs built by nature.

The stunning coastline that seems to hold it up is known as the Riviera del Conero, and the Conero Regional Park, a marvellous natural oasis, stretches across the landscape. This natural paradise overlooking the sea is the flagship on the Adriatic coast. It offers many activities, including trekking and birdwatching, immersed in the extraordinary beauty of the Marche landscapes between the sea and the hills.

Going on through your journey in the Marche region, you will discover courtly love. In Gradara, a pretty town in the province of Pesaro and Urbino, you can admire the magnificent castle that dominates the ancient medieval village. With an outer wall of almost 800 metres, the manor was the scene of town battles in medieval times. However, it owes its fame to Dante Alighieri. According to some legends, the events surrounding the tragic love story between Paolo and Francesca narrated in the Divine Comedy were set in this stunning fortress.

Today, the castle has become one of the most visited monuments in the Marche region and a place for artistic events.

Here is another Dante's footstep in the Marche: we take you to the Monastery of Fonte Avellana, mentioned by the Supreme Poet in his Paradise. The hermitage locates at the foot of Mount Catria, in the tiny municipality of Serra Sant'Abbondio (less than 100 inhabitants!) in the province of Pesaro and Urbino. Surrounded by lush vegetation, the monastery has an almost mystical and evocative aura, wrapped in the silence of the surrounding woodland. This place contains priceless treasures that tell its thousand-year history. First and foremost, the medieval scriptorium, used by the amanuensis monks for their literary labours.

7. Recanati between view and poetry 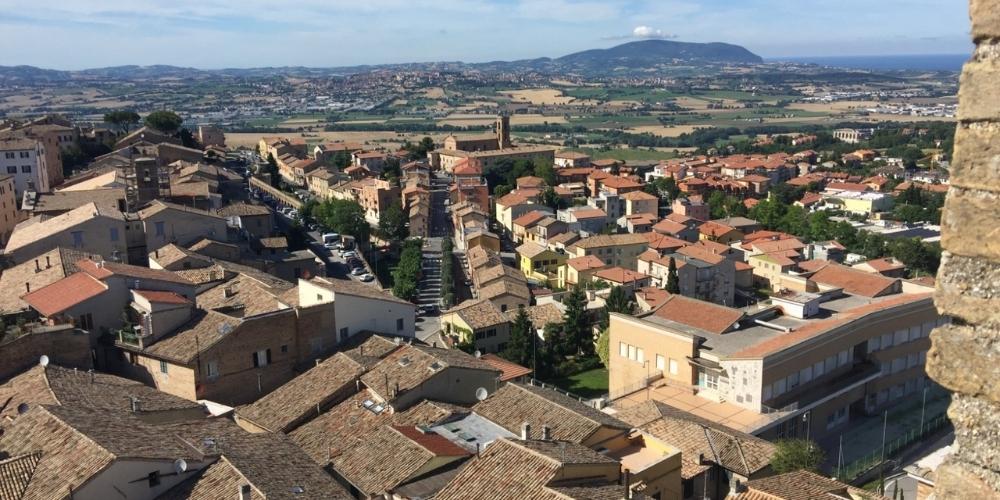 Here is another literary stop. We take you to Recanati (in the province of Macerata), the birthplace of the great Italian poet Giacomo Leopardi. Recanati locates in the heart of the Marche region, nestled between the coast and the hinterland. It is often referred to as the "balcony town". The wide and breathtaking view from the hill on which it stands embraces a vast expanse that includes Mount Conero, the Sibillini Mountains, and the surrounding villages, valleys and hills.

An exciting city tour brings you through the footsteps of the great poet, in the places that characterised his life. First and foremost, the small square of "Sabato del Villaggio" (homonymous 1829 poetry), overlooked by the eighteenth-century Palazzo Leopardi, which houses the poet's and his beloved Silvia's homes. Moreover, in Recanati, you will find the Colle dell'Infinito (Hill of Infinity), whose view inspired the famous poem of the same name, and the Torre del Passero Solitario (Tower of the Lonely Sparrow), located in the courtyard of the palace where the poet's mother lived.

Let's focus on the province of Macerata, and we will show you a fascinating natural spectacle. Near Lake Fiastra, you can behold the so-called Lame Rosse (Red Blades), rock formations due to a particular erosion phenomenon that has created natural pinnacles and towers carved into the rocks. Surprisingly, you will find a piece of America in Italy: the Red Blades are known as the Italian Canyon. Are you ready for a stop in the America of the Marches?

Among the itineraries for visiting it, we would like to point out the path accessible to the less experienced. It is about 7 km long (3 hours/3 hours 30 walking) and is characterised by the continuous change of landscape. Long stretches of lush vegetation alternate with magnificent views of the lake. You then pass through an almost alien landscape, where the typical red of the Blades colours the entire environment.

One of the unmissable destinations of your trip to the Marche region is undoubtedly the city of Pesaro. It offers numerous attractions to its visitors. Among them, we point out the Big Sphere, commonly called Palla di Pomodoro (Tomato Ball). It is an absolute masterpiece of Contemporary Art by the famous sculptor Arnaldo Pomodoro (1998). The imposing bronze sphere lies on the fountain water's surface in Piazzale della Libertà. Although the original work of art is now in Rome (in front of the main entrance to La Farnesina), the people of Pesaro have become so attached to its presence that it has become a meeting point or reference point for giving tourists directions.

However, Pesaro is also well-known for its well-equipped coastline, which you can reach by bike thanks to its ultra-modern cycle paths. In addition, we would like to mention that the city is home to numerous churches and civil buildings. Among the most important structures, we would like to point out Rocca Costanza, the city's most important fortification, dating back to the second half of the 16th century. Finally, the Rossini Conservatory is the icing on the cake. It is dedicated to the famous Italian musician born in the city.

4. The Sanctuary of the Holy House in Loreto

The next stop on your journey is a place of extraordinary mysticism: the Sanctuary of the Holy House in Loreto. Inside the imposing basilica-fortress, the relic of the Holy House of Nazareth is preserved. The Virgin Mary is said to have been born and lived with Jesus in this house. According to tradition, when Nazareth and all of Palestine were under the rule of the Mamelukes of Egypt (late 18th century), angels picked up the Holy House and flew it away. They first deposited it in the city of Rijeka and then moved it to the province of Ancona, where it remains today. The church has become a significant religious destination, where hundreds of pilgrims come to worship the remains of the Saviour's birthplace every year.

Focusing on the province of Ancona, we take you to Genga. Here, you can admire a one of a kind natural spectacle: the Frasassi Caves, discovered in 1971. In this place, you will be fascinated by how the extraordinary action of nature has been worthy of the best sculptors. You will find wondrous stalactites and stalagmites in this fantastic place, i.e. natural statues formed over millions of years of limestone deposits.

The marble complex is made up of several underground chambers. The first, known as the Abisso Ancona, is easy to visit. It is an abnormal cavity: to give you an idea, imagine that the Duomo of Milan would perfectly fit inside of it!

2. Fabriano, the city of paper

Fabriano, the city of paper, has to be a must on your travel notebook of the Marche region. It is famous all over the world for its renowned paper mills. Visitors can retrace all the historical stages of this noble manufacturing activity in the Museum of Paper and Watermark.

However, Fabriano hosts more than paper history. There are many beautiful examples of medieval civil architecture dotting the city. Most of them are gathered in the Piazza del Comune, overlooked by the Palazzo del Podestà and, on the opposite side, the Loggiato di San Francesco, built to join the Church of San Francesco to the square. In the heart of the square is the Sturinalto Fountain, one of the most significant examples of medieval European architecture. There are also numerous religious structures. We recommend the Cathedral of San Venanzio, the city's main church. Finally, Fabriano is rich in majestic natural areas, such as the Frasassi forest (WWF Oasis) and Mount Cucco. 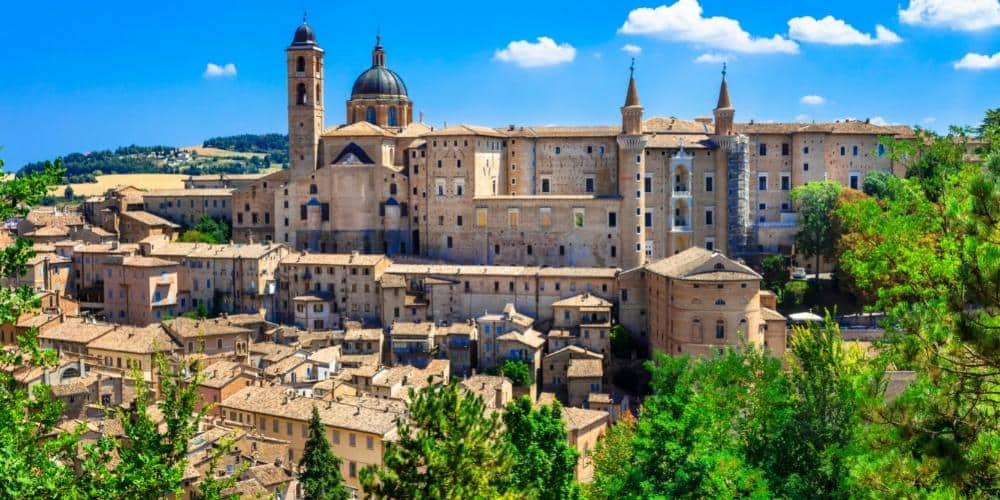 Your adventure in the Marche region must end with an in-depth visit to the city of Urbino, a UNESCO World Heritage Site since 1998 and the cradle of the Italian Renaissance. Here, you will be able to admire a series of structures that represent the most outstanding example of the architectural heritage of this era. Urbino is also home to the Galleria Nazionale delle Marche, which houses masterpieces by the greatest Renaissance artists, and the House of Raphael, born in this beautiful city. Civil, religious, military and artistic buildings dot Urbino, making it an authentic Italian jewel.