5 Italian cities to visit in autumn

Autumn takes us slowly and gracefully into the harsh winter. So, why not enjoy the passage? A trip to Italy is always a good idea and autumn is perhaps one of the best seasons to visit some of its beautiful cities. Below, we indicate 5 of them.

Situated in the heart of the Po Valley, Mantua is a city built around three lakes. These expanses of water give it a romantic soul and turn it into the ideal place to enjoy a bike ride or even just a walk. In autumn, the beauty of the place intensifies thanks to the chromatic games of this season: the autumnal colours of the leaves match perfectly with the typical brick colours of the city. Mantua was named Italian Capital of Culture in 2016 and is a Unesco Heritage since 2008, along with Sabbioneta. Both cities are almost intact examples of Renaissance urban forms. In particular, Mantua preserves the Renaissance treasures of the Gonzagas, the Italian noble family that ruled the city for 400 years.

FIND OUT MORE ABOUT ATTRACTIONS IN MANTUA❯

What to see in Mantua

It is not by chance that Mantua is rich in places and monuments to visit. Here are some of them:

• St. Andrew's Church. According to tradition, the Church keeps an ampoule containing earth dipped in the blood of Christ;

• The Cathedral, where the most important members of the Gonzaga family are buried;

• Te Palace, a villa built on the commission of the Gonzagas around the middle of the XVI century. It represents an absolute masterpiece of Renaissance art.

For an autumnal stay in the city, we recommend a cruise on the three lakes and an exciting excursion in the nearby Mincio Natural Park, a magnificent protected natural area. Here you can be enchanted by the autumnal colours and behold many species of birds in their natural habitat. Finally, you can not miss a culinary stop: we recommend the delicious pumpkin tortelli (fresh homemade pasta) and the tasty sbrisolona, a crumbling cake made of almonds.

Set in a majestic alpine setting, Cuneo has very ancient origins, dating back to the end of the twelfth century. Seen from above, the northern part of the city looks pointed, just like the shape of the plateau on which it rises. Then, it gradually widens towards the southern area. The heart of the city is characterised by the large Piazza Galimberti, home to the famous weekly market, and Piazza Torino. The main road that divides the two squares is Via Roma. Taking an autumn walk along this road full of medieval arcades is a unique experience. The Church of Santa Maria (neoclassic cathedral), the Town Hall and the Civic Tower are must-visit. Among the most evocative corners of the city, we recommend a visit to the ancient Jewish ghetto of Contrada Mondovì, a pedestrian area that houses - among other things - the Diocesan Museum. The Civic Museum has been set up inside the grandiose Monumental Complex of San Francesco, a fascinating example of Piedmontese Gothic art.

The Park and the surrounding villages

If you want to leave the city to immerse yourself in nature, we recommend visiting the Gesso and Stura Park. With an extension of 5,500 hectares, the Park aims at protecting biodiversity and the Piedmont natural heritage. Just for the autumn season, the Park organises a series of thematic excursions so that visitors can get to know all its beauties. Finally, you can reach many pretty villages in the province of Cuneo, such as Saluzzo, Alba, Barolo and Bra. 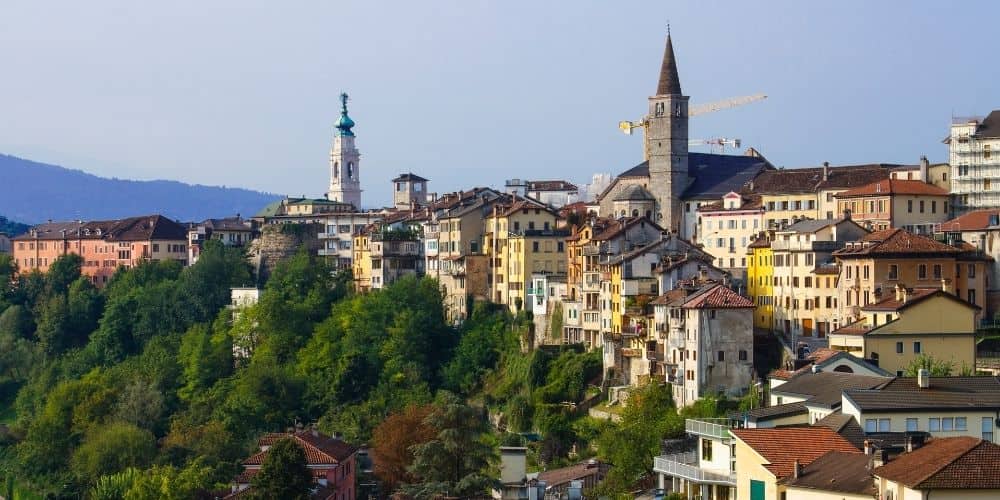 Belluno is a quiet and peaceful town overlooking the River Piave Valley. From here, you can catch sight of the majestic Dolomites peaks. The historic centre of Belluno is full of alleys and arcades that make this city a little gem set in a fascinating natural landscape and far from the chaos. From Piazza Duomo, you can start walking around the town and admire the buildings that adorn it. Then, you reach the heart of the city with Piazza Vittorio Emanuele, the Teatro Comunale and Piazza dei Martiri, the local spot where citizens love to meet and chat. Among the typical dishes of Belluno, we recommend casunzei (ravioli pasta filled with smoked ricotta cheese, spinach and potatoes).

Finally, we recommend visiting the Cansiglio Forest, one of the most important environmental resources in Veneto. Located between the provinces of Treviso, Pordenone and Belluno, the Forest is a wide basin covered with a green prairie. The route is easily accessible. By walking through the forest in autumn, you will enjoy the silence of nature and be fascinated by the warm colours of the landscape. Then, if you reach the top of Mount Cavallo, you can even see the lagoon of Venice on the sunniest days.

Grosseto is a historical town situated in the heart of the Tuscan Maremma. Protected by a wall, the city has remained unchanged over time. Its origins go back to the Etruscan era, and then they cross the meanders of ancient history.

FIND OUT MORE ALL THE ATTRACTIONS NEAR GROSSETO❯

The Medici walls in Grosseto

The Medici walls surrounding it are the emblem of the evolution of Italian defensive structures. Thanks to the will of Grand Duke Cosimo I Medici and military architect Baldassarre Lanci, the city passed from being a castle-fortress to a city-fortress. The main features of this new defensive structure completed almost at the end of the 17th century were the hexagonal shape and the connection with the six angular bastions.

Squares, churches and museums in Grosseto

The stunning Cathedral is named after Saint Lawrence (patron of the city) and is reminiscent of the Romanesque style, with the typical central rose window and the white-red two-toned. The most important square of the town is Piazza Dante. In its centre, the statue of Leopold II stands proudly. According to history, the grand duke worked for the reclamation of the Maremma affected by malaria. In the heart of the old town, we find the ancient Church of Saint Peter, dating back to the early Middle Ages. Among the museums, we recommend the Maremma Archaeology and Art Museum, where you will find the history of the Maremma from its origins to today, and the Maremma Natural History Museum, where you can learn more about the complex biodiversity of the area.

In addition, in Grosseto surroundings, you can admire pretty villages, nature reserves and areas used for hiking and cycling. Last but not least, near Grosseto you will find the sea. If you miss the summer season, in Grosseto you can choose between beautiful beaches. The coast of Maremma offers relaxation, but also fun, recreation and water sports. Finally, we point out the Maremma Regional Park. Immersed in the beautiful Tuscan nature, you can choose to try several activities, including trekking and climbing.

Camogli is a lovely seaside village located in the Riviera di Levante. The municipality mainly develops on the hills, but we recommend visiting the small town centre - almost entirely pedestrian - which focuses on sea level. The streets are connected by numerous staircases and the famous creuze, a term that the Ligurians use to indicate small and narrow lanes born in ancient times to connect the port area to the hinterland. The main road is parallel to the beach and is framed by typical colourful houses. In fact, as in many other Ligurian cities, even in Camogli you will find an expanse of colourful houses: the lively colours allowed sailors to recognize their homes from the sea. Among the must-see buildings, we recommend the medieval Castle of Dragonara. Used as a defence against pirate attacks in ancient times, today the Castle hosts exhibitions and expositions.

WHAT TO DO IN CAMOGLI AND SORROUNDINGS ❯

We also recommend a trip to the Portofino Natural Park, a beautiful protected natural area established in 1935. In your walks in Camogli, you will be accompanied by the Ligurian sky, dyed of an intense blue even in the autumn months.