The Dolomites: tour to discover the pale mountains

The Dolomites stand, in every sense, among the most famous and appreciated italian natural attractions in the world. Let's get to know their beauty through a tour of the so-called "pale mountains".

Italy holds unique beauties among its shores, so much so that every corner of belpaese is known all over the world. Among the natural beauties that Italy hides inside, there are without a doubt the Alps, a natural border between Italy and the rest of Europe, famous already in Roman times, when they were an insurmountable obstacle for the enemies empire.

The Alps protect Italy but also preserve treasures, which are envied throughout the rest of the world, including the Dolomites.

The Dolomites occupy most of the eastern Alps and extend, mostly, to Trentino-Alto Adige and are also famous as the Pale Mountains. The term derives from the coloration that the peaks of the Dolomites assume during the various hours of the day ranging from red to purple, passing through orange and pink. The color change seems a magic but it is due to a physical effect, all of the Dolomites, the enrosadira, a phenomenon whereby the tops of the mountains take on a pink coloring at sunset that slowly changes to purple.
Since 2009 the Dolomites have been included in the UNESCO World Heritage list, but discover with me what you can see on these mountains.

The tour of the Dolomites

The Dolomites are a real delight for the eyes but also for the soul. The uncontaminated purity of these places is unique of its kind, so much so that you spend a whole day in the Dolomites going through the valleys, the Alpine passes and the most famous places like Val di Fassa, the Sella Group, Cortina and Lake Misurina and many others.

The tour of the Dolomites can have different itineraries that you can tackle: from excursions to trekking routes that offer you breathtaking views and landscapes. The Ampezzo Dolomites extend mostly in the Veneto region and around the area where Cortina d'Ampezzo stands, one of the tourist hubs of the entire mountain range. Formed by six mountain groups that make up the natural park of the Ampezzo Dolomites. The main group is that of the Tofane, a collection of peaks that overlook Cortina and offer different itineraries depending on the season.

In fact, in winter this area becomes a real ski area with different routes for alpine skiing, while during the summer season, the Ampezzo mountains offer you the possibility of hiking and biking or riding an horse. 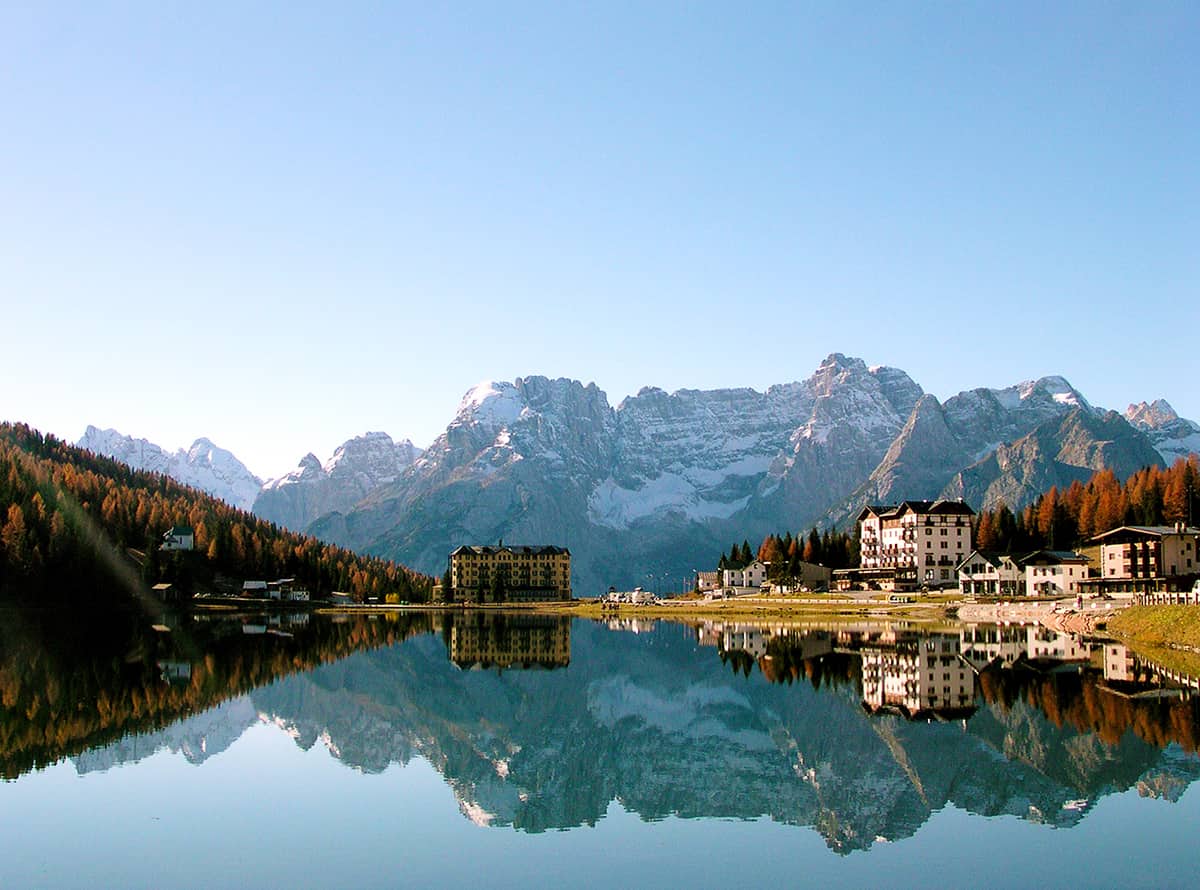 Among these natural beauties I can mention numerous lakes, such as the aforementioned of Misurina or the Serrai di Sottoguda, which are a deep gorge within the mountain range and the natural reserve of Somadida, the largest forest in the area.

In addition to natural treasures, the Belluno Dolomites are a veritable well of history and culture. It is one of the populated places already several million years ago, so much so that in these areas there are many discoveries of settlements of the Iron Age and also the discovery of two of our ancestors, the man of Mondeval and of the Ursus Spaeleus , makes it a unique place to visit. While among the most recent testimonies I cannot help but mention all the castles and churches built on these places, including the Basilica of San Martino in Belluno and the castle of Andraz in Pieve di Livinallongo.

The area of ​​Campiglio-Pinzolo is famous, above all, during the winter season for its famous ski slopes on which you can practice all the numerous activities related to the snow like cross-country skiing but also snowboarding and sleddog.

The area is located in the Adamello Brenta natural park, and hosts one of the pearls of all the Dolomites, Madonna di Campiglio, which is the quintessential winter holiday destination, also frequented by high society personalities.

In fact, fame is also historical, so much so that already Queen Sissi of Habsburg spent the winter holidays in these places, and still today, with the Hasburg carnival the happy event is recalled by tourists and inhabitants. Among the many peaks the Val di Fassa is the most famous valley of the Dolomites and a favorite destination for those who want to undertake excursions or ski tours. Surrounded among others by the Catinaccio with the Torri del Vajolet and by the Marmolada, from here you can watch the beautiful phenomenon of enrosadira, when at sunset the peaks of the Dolomites begin to paint themselves with different colors tending to purple.

Among the many activities offered in this area, in addition to skiing in all its forms, you can also choose from numerous activities, especially in summer, such as Nordic walking, paragliding, trails on streams on slopes, barefooting activities, etc.

The Dolomites are a real rocky shell of beauty and breathtaking views, but also of many sporting, cultural and wellness-related activities that you cannot miss if you come to Italy. What are you waiting for? Run to enjoy the beauty of the pale mountains!