Every country in the world has its own traditions for New Year's Eve. Even Italy has its own auspicious superstitious rituals. Are you curious to know what they are and if they really bring good luck?

Between dinners, dances and celebrations, people worldwide are waiting for the arrival of the new year and counting down to say goodbye to the old one. We anxiously await the arrival of midnight in the company of friends and family in the hope of good luck, money, success or love. Full of good intentions, expectations, and dreams, we try to help fate with propitiatory acts in Italy. Are you ready to celebrate New Year's Eve under the banner of our top ten? A worldwide custom, in Italy, fireworks are also called botti (literally, bangs). They were first used around the 13th century to celebrate military victories. It wasn't until the middle of the 17th century that the tradition of fireworks at events or festivals took hold. They were believed to drive away evil spirits by scaring them away with their loud noise.

The first fireworks were "faded", but with the addition of certain chemicals, we now see colourful and evocative displays lighting up the sky. The sound, which is just as exciting, with its rhythm marked as if it were music, is not to be underestimated. As soon as midnight strikes, all the cities turn into an authentic "trench" where people compete and shoot off plenty of them, especially in central and southern Italy. 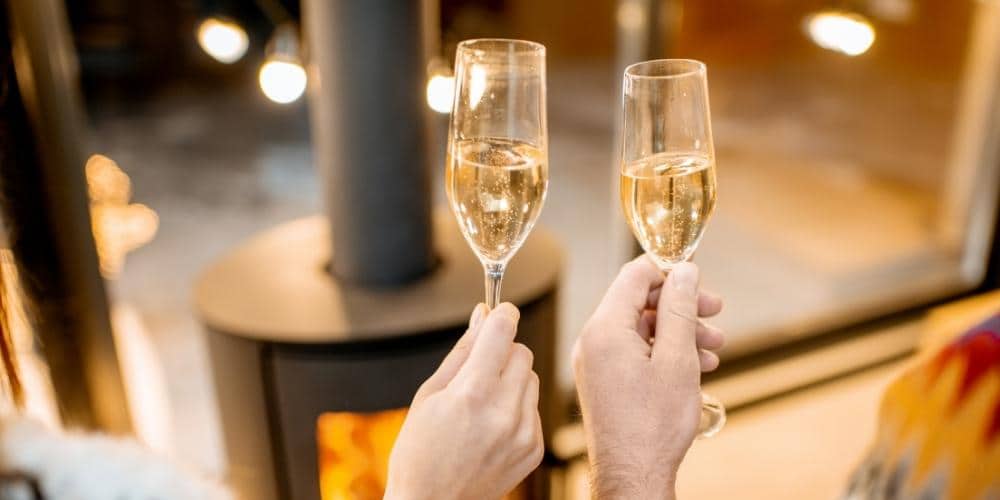 Sparkling wine and bubbles on New Year's Eve are a must! Toast is made between 31 December and 1 January, precisely at the stroke of midnight. Whether you prefer it sweet or dry, the important thing is that you uncork the bottle and make a big bang. Otherwise, according to tradition, it is not a good sign. Another auspicious custom is to moisten your fingers with sparkling wine splashed everywhere and pass it behind your ears. With the enormous variety and quality that Italy boasts, as the world's leading wine producer, you'll be spoilt for choice when it comes to welcoming the new year.

8. Kiss under the mistletoe 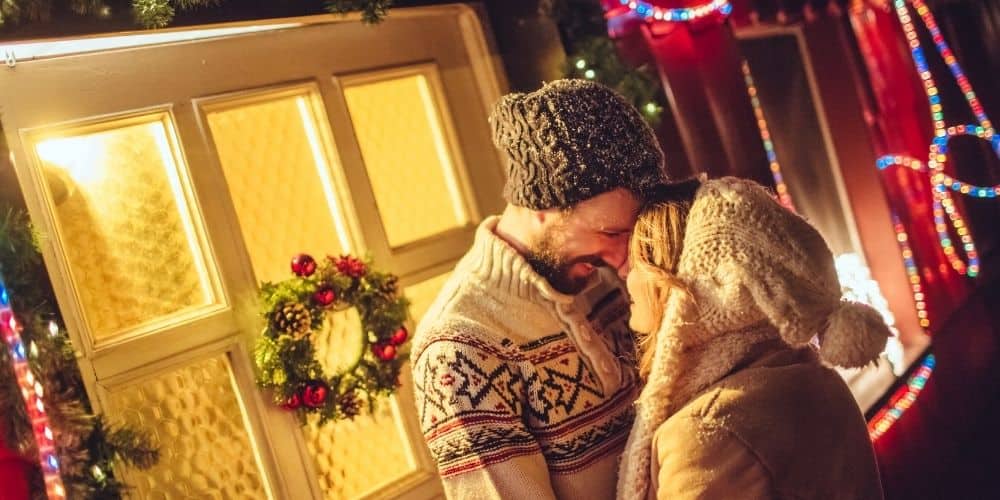 Kissing under the mistletoe is a must to start the year on the right note. With its lush leaves, mistletoe symbolises fertility, vitality, and the antithesis of death. Used in almost every decoration in our homes, it creates just the right atmosphere, warm and romantic, for kissing your partner. It is said that a kiss under a sprig of mistletoe has the power to protect the feelings and love of the couple and that the plant itself is a good augur. 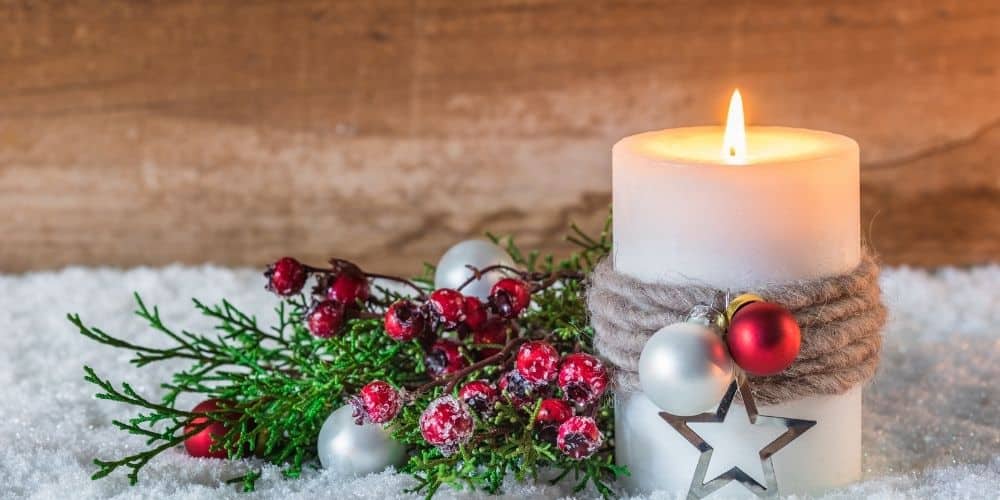 A little-known tradition, but widespread in various regions of Italy, is to light candles in the house just before midnight and let them burn out. It is a sort of passing of the baton from the old year to the new one. Let's not forget that fire has always been a symbol of purification and renewal that drives away negativity and bad luck. But that's not all! There is a precise code to follow. If we wish to become richer, we light a green candle and a red and white candle if we are more romantic and focus on love. 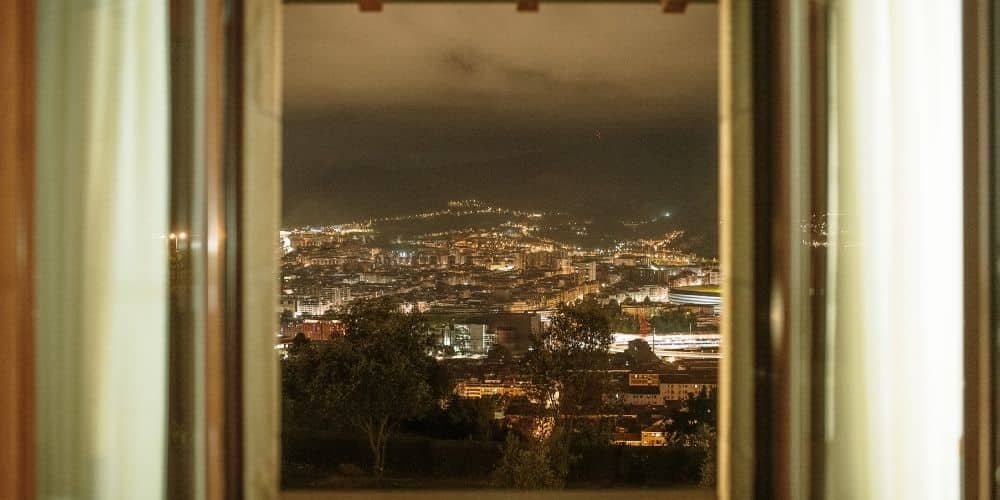 This custom is not very popular either. However, it is very simple to put into practice as it consists of opening the window of a dark room before midnight. This procedure would drive out evil spirits and negative energies in the house. We somehow create the right conditions for a good start to the year by airing the room and purifying the air. It is undoubtedly a very unusual superstitious ritual, but try as you might! 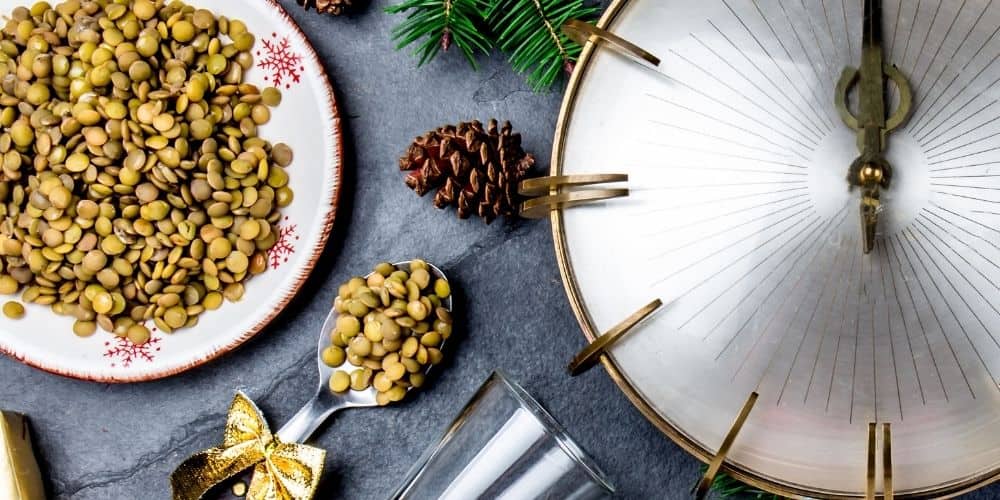 There is no shortage of food-related food among the rituals that characterise New Year's Eve. At midnight, at every dinner, lentils served with boiled cotechino (large pork sausage) or zampone (sausage made from pig's trotters stuffed with minced pork shoulder) - depending on taste - are a must. Zampone or cotechino meat, being fat, represents abundance. Lentils symbolise money because their shape resembles small coins. These delicious legumes are authentic excellence of the Umbria region.

The pomegranate is a plant sacred to Juno and Venus and stands for longevity, fertility, and wealth. Therefore, its presence on the table would bring good luck to diners. Eating the ruby-coloured berries attracts good fortune, whether added to a salad or in a more elaborate recipe. 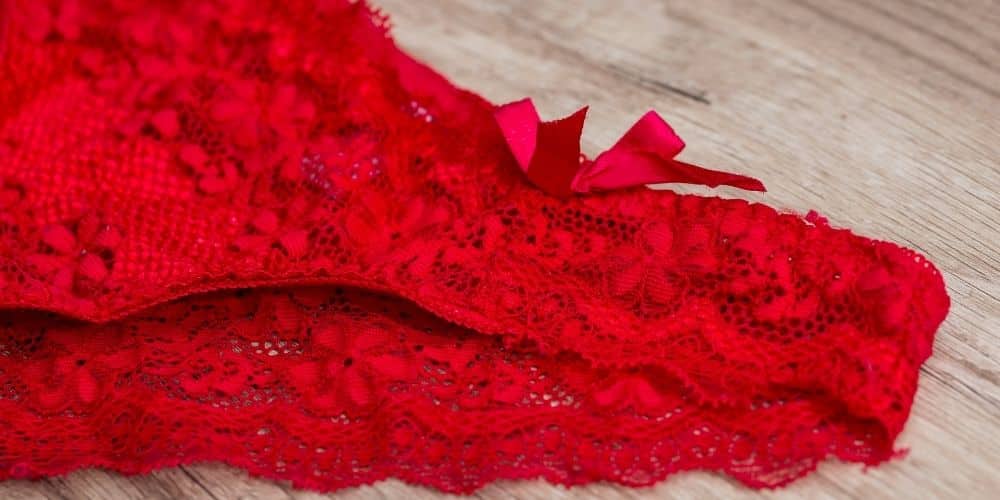 Since Roman times, red has always been associated with power, health, and fertility. Therefore, it is a kind of good luck charm: it is no coincidence that chilli peppers and pomegranates are considered auspicious. According to tradition, you should wear something red on the last night of the year. Generally, it is underwear, but a jumper is enough. These unusual superstitions convince even the most sceptical about pleasing Lady Luck. 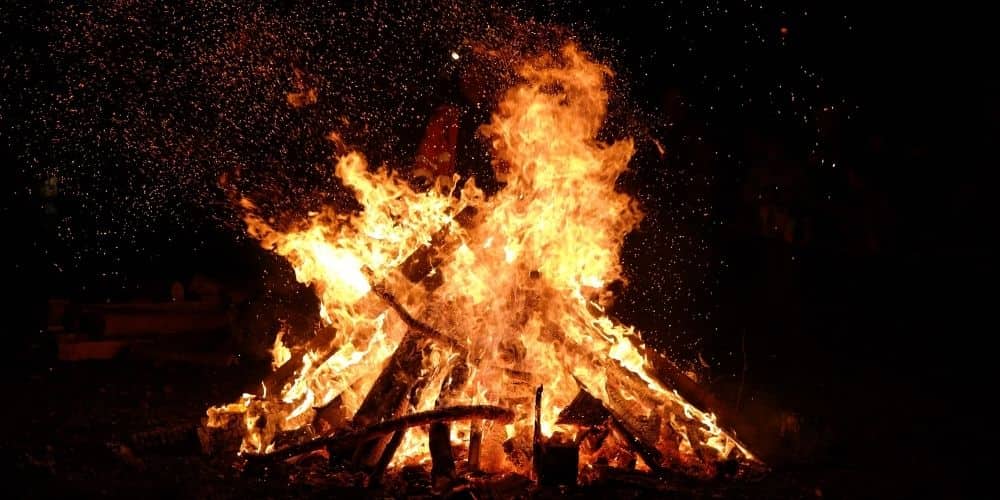 Fire is the profound force that enables regeneration of Nature with its light and heat. Burning, purifies and renews, driving away evil and negativity. This is the reason why, especially in the northeastern regions of Italy, there is a custom of lighting bonfires to bring prosperity, fertility and good luck.

A well-established tradition in Bologna - but also in neighbouring municipalities and the Modena area - the Vecchione Bonfire is an event not to be missed, enriched by musical and pyrotechnic performances. The Vecchione is a puppet in the shape of an old man that is burned at midnight on 31 December in the picturesque Piazza Maggiore. The Vecchione stands for the old year: it is fed to the flames hoping for a better year. Bizarrely, in leap years, the puppet with a woman's appearance is called the vecchia, which literally means old lady! 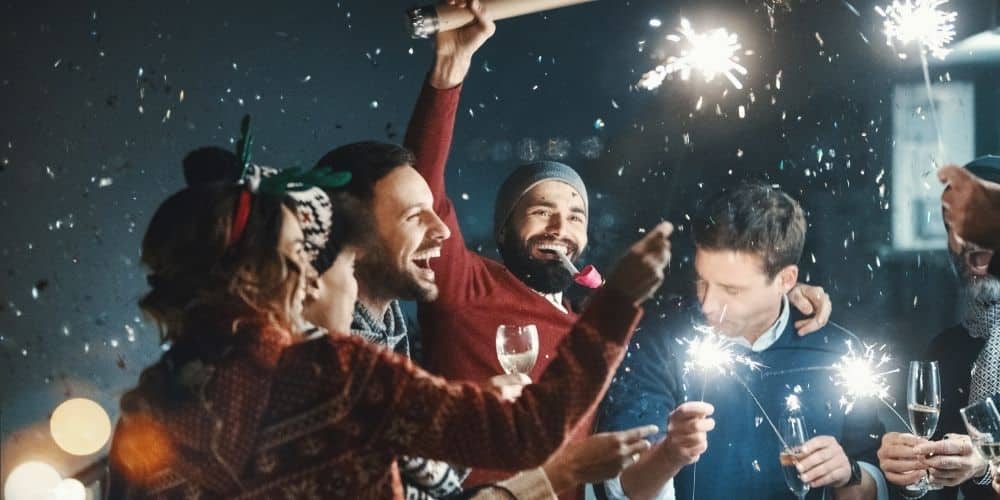 Throwing away old objects is a symbolic gesture that is, in a way, related to detachment from the past and from everything that characterised the old year. Of course, we mainly mean the bad and sorrowful things. So, by getting rid of the "old", we make room for the "new", namely the future. In Italy, especially in the smaller towns, there is still a custom of throwing away unused or old objects such as plates. However, you may also see more oversized household items flying around. Be careful if you walk under windows or balconies on New Year's Eve!

1. Dip into the Tiber 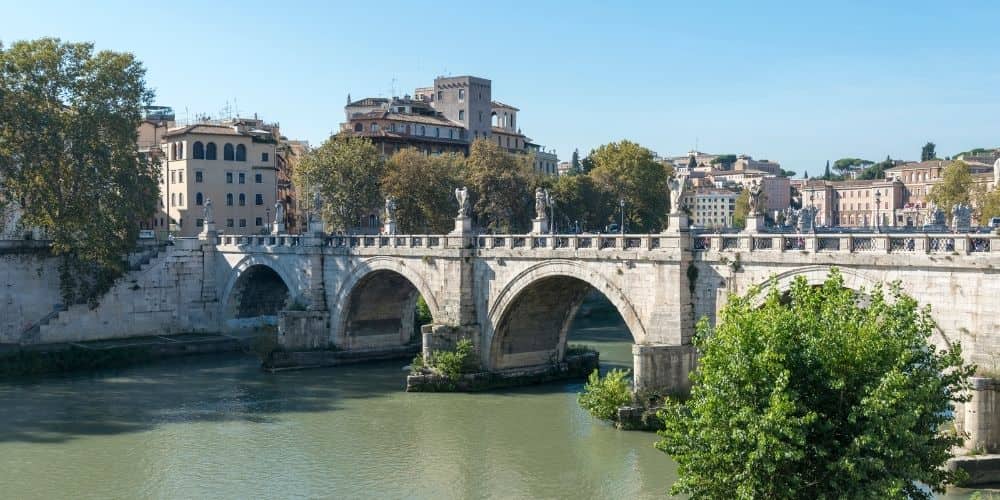 In Rome, the traditional ritual of welcoming the New Year with a dip in the Tiber River is not an easy feat. The origin of this custom dates back to 1946 when Rick de Sonay, a brave Italian-Belgian citizen, jumped into the river in costume and a top hat. At the end of his performance, he used to wave his hand to indicate that everything had gone well. Hence, the nickname Mr. Ok was born. It may not seem like much, but it is a leap into the icy, swirling waters of the river. The whole thing takes place at the height of 18 metres from the marble balustrade of Ponte Cavour.

With bated breath waiting for the daredevil to re-emerge, the public gives in to warm and thunderous applause. This unusual ritual has since become an unmissable event for Roman citizens. The performance takes place near the historic twentieth-century bridge between the Rione Campo Marzio and Piazza Cavour. Don't miss this spectacle, punctual and unmissable every year, on 1 January at noon, immediately after the cannon is fired from the Janiculum Hill.

This tradition, however, is also honoured and respected on Ischia island with the famous plunge into the sea. The not-so-mild temperatures do not frighten us. In the presence of the island's inhabitants, intrigued by the event, the bravest jump into the waters of the Mandra beach, near Ischia Porto, at midday. The cold climate is also being challenged in Pozzuoli and several cities in Sicily: here, the New Year is celebrated memorably too.