Do you want to visit Bologna like a local? Then check the 7 things to do to live the city like a true Bolognese.

Few Italian cities have such a distinct character as Bologna.

City of culture, books and cinema.

But also an elegant market city, madly in love with its food.

The Bolognese people, those who remained in the city and those who moved to the hills, are now used to the cheerful hordes of university students.

The fusion of the local traditions and the energy of the young students gives Bologna a unique vibe.

Navigating the city like a local needs some tips... that's why we created a list with our favorite activities and places to see to let you experience the city like a true Bolognese: off the tourist routes but still close to the heart of the city.

Find out what are the 7 things to do in Bologna like a real local.

Let us guide you to the best viewpoint and the local markets and discover how to plan the perfect trattoria experience.

7. Shop in a local market Shopping in the markets of Bologna is a great way to experience the city like a local.

Bologna boasts several markets, some a bit touristy but all very local.

If you want to do the "culinary" shopping like a Bolognese, buy the regional products from the countryside: cheeses (parmesan and squacquerone above all), cold cuts (mortadella, ham and greaves), balsamic vinegar, fresh pasta, fruit and local wines such as lambrusco.

Start from the very traditional Mercato di Mezzo, a popular and authentic market selling excellent products. Restored in 2004, the Mercato di Mezzo is quite picturesque, with stalls and small shops near Piazza Maggiore.

On the other hand, the Mercato delle Erbe is an excellent covered market in the city center, with fresh fruit and vegetable stalls but also independent delis and wine bars. Great for walking, shopping and having lunch, but also for an aperitif with friends: if you only have time for one market, try this.

For even more local shopping, head to the Mercato Ritrovato, taking place every Saturday morning in front of the Cineteca di Piazzetta Pasolini. This is the farmer's market par excellence, ideal for buying products from the Bolognese countryside at km 0.

Other interesting local markets are the one in Piazza Aldovrandi (this is an only-local one) and the Albani-Bolognina Market (also famous for street art).

6. Enjoy the view from the belvedere

The incredible sunset view from the belvedere.

The best viewpoint in Bologna is the terrace in front of the San Michele in Bosco church.

This belvedere is located on the first hill south of Bologna, in front of the churchyard.

The square is very popular with local couples and professional photographers, especially at sunset or when the sky is very clear.

The trees of the park below the belvedere have been pruned recently, so the viewpoint has an uninterrupted view of the centre of Bologna, with its red roofs, towers and the Basilica of San Petronio.

A hidden gem for you: if you visit the church of San Michele in Bosco, you can enjoy an unparalleled view of the Asinelli Tower. From the presbytery, take the door on the right leading to the corridor of the convent. The length of the corridor and its alignment with the tower create the famous "telescope effect": the tower seems so close that you can touch it... you have to try it!

The walk from the Piazza Maggiore to the terrace is 30-40 minutes. You can walk through Porta San Mamolo or Porta Castiglione: the final bit is uphill. Bus lines 29 and 30 are also an option to get near the terrace.

5. Eat in a trattoria 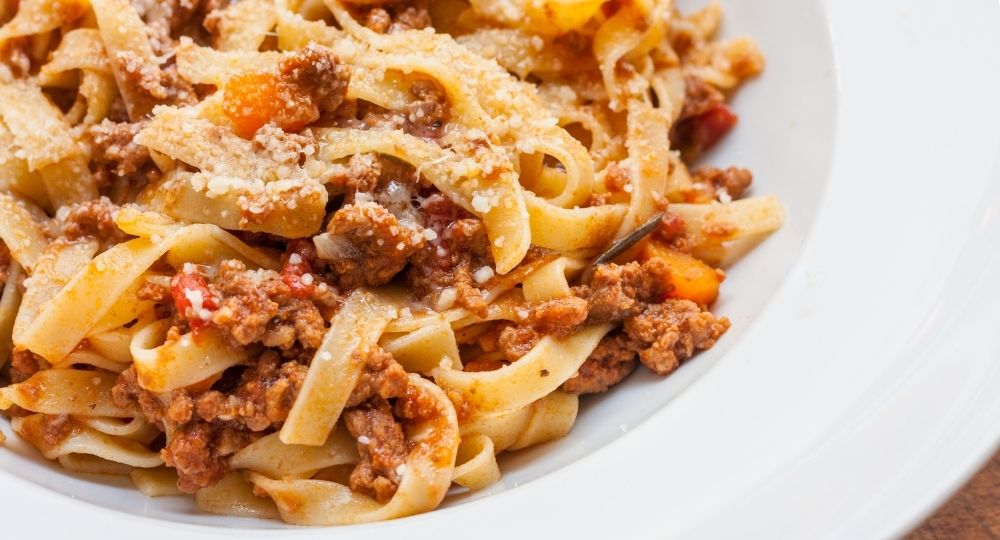 Bologna is called the "fat" not by chance.

The dishes of the Bolognese cuisine are opulent in form and unrivalled in taste, thanks to the quality of the products of the countryside and recipes that have their roots in the Middle Ages.

Bologna is full of trattorias and osterie where you can appreciate traditional flavours for a good price.

To pick one, just ask the friendly passers-by what their favorite restaurant is and they'll point you in the right direction. The small alleys around the main squares are dotted with traditional eateries.

The experience in a trattoria can only begin with a platter of appetisers and a glass of lambrusco wine: you'll find great cured meat, like mortadella, culatello and Parma ham, and fragrant bread-like treats like tigelle or crescentine.

Winter is the realm of tortellini in brodo ("in broth"). Also try the variants of pasta ripiena ("filled pasta"), such as tortelloni topped with butter and sage cream.

Other great choices as a main course are passatelli in brodo and maltagliati ai fagioli (a type of pasta with beans), a staple of "peasant cuisine" adored by the locals.

Close your dinner with one of the excellent local desserts, such as torta di riso ("rice cake") or zuppa inglese (literally translates as "English soup" but it's a trifle). If you are in town at Christmas, look for the certosino (a spiced cake) or the pinza.

4. Fall in love with cinema

Bologna and cinema: an inseparable union.

The past is Pier Paolo Pasolini. The present is the Cineteca. The future of local visual arts is shaped by the university class called DAMS.

Traveling to Bologna is a way to deepen your cinema knowledge.

You should start from the Cineteca di Bologna, an autonomous institution restoring, preserving and promoting its cinematographic heritage with events and retrospectives.

Thanks to the work of the Cineteca, we can enjoy the “Cinema Ritrovato” festival, an event very popular with the Bolognese (very recommended). The festival usually takes place both indoor and outdoor between June and July: the selection of movies is interesting, with auteur films and great classics. Book your seat and enjoy a cool summer evening under the stars.

The "Sotto le stelle del Cinema" event is another must-do in summer time. It's a classic outdoor cinema set up in the splendid Piazza Maggiore: if you are travelling in the city in summer time, find out if the event is scheduled.

Finally, you are in the city of Pier Paolo Pasolini and you can explore the places where the Bolognese director grew up: his high-school (Liceo Galvani) and the University of Bologna in Via Zamboni, but also some locations of his films and his preferred library (Nanni Library). The Cineteca library is now the seat of an important archive: here are stored screenplays, set photos and other documents telling the story of the director. An itinerary absolutely worth exploring.

Bologna boasts almost 40 cinemas, like the "Cinema Lumière", with films in the original language, and many theatres with the most recent films: it is not difficult to find something for your tastes.

3. Chill in a public park The large avenues of the Giardini Margherita (by Ilariaconte - Opera propria, CC BY-SA 4.0)

Bologna boasts several parks where you can walk, run or just relax.

When locals cannot go to the hills, they take advantage of the small public parks within the circle of walls, or just outside them.

The Montagnola Park is the oldest city garden in Bologna. The gem of the park is the elegant staircase from where you have a splendid view of Via Indipendenza. Just chill among the monumental plane trees and look for the old castle ruins.

The Parco del Cavaticcio/11 Settembre is located in an old industrial area and is an important meeting place for locals, often hosting events. The park is an open-air art gallery thanks to its numerous statues.

Inside the walls there is also the Giardino del Guasto, built on the ruins of a noble palace. This tree-lined park is small and decadent, but not without charm, with graffiti covering the many concrete structures.

Outside the walls, you can find the Giardini Margherita, the largest and most popular green area in Bologna (inspired by romantic English parks). Enjoy a peaceful moment on the grass of the park or join the local runners on excellent perimeter road (with 2 km of complete loop).

Finally, check out Villa Angeletti Park, just north of the city. Almost 9 hectares of green area along the shore of the Navile canal, with a playground for children, various paths and naturalistic observation points.

2. Visit a library or a bookshop 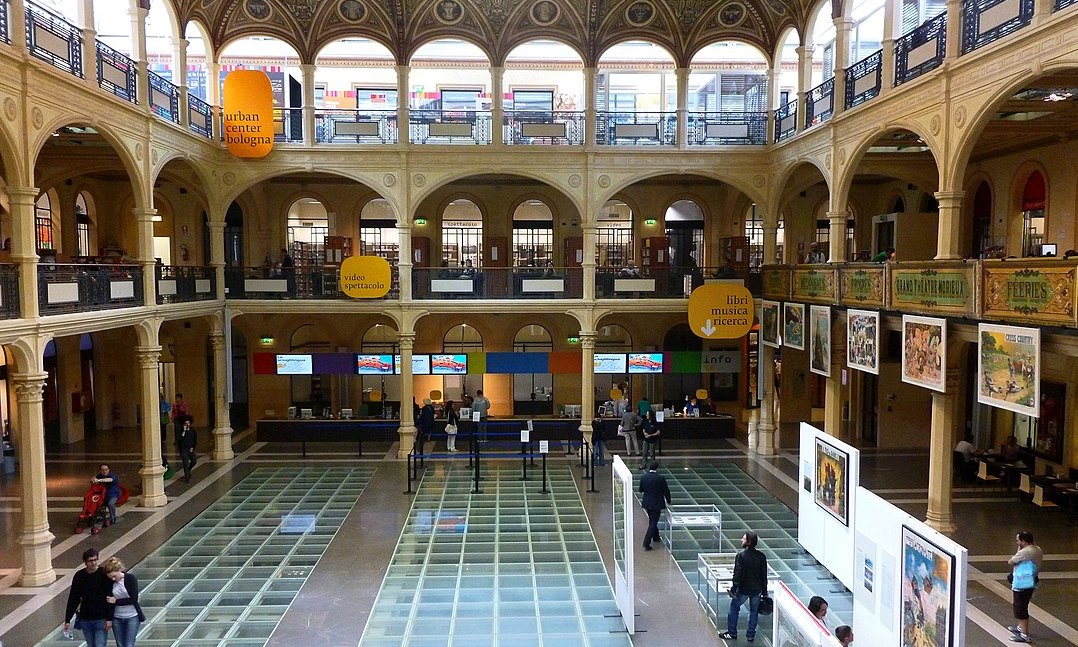 We are sure you know that Bologna is called "la dotta" (the "learned" one).

What you may not know is that there are more than one hundred libraries in Bologna and that in 2020 the city received the national recognition of "City that reads", because it promotes reading among its citizens.

Bologna is therefore the ideal place to become passionate about reading and explore one of the most beautiful libraries in Italy.

We are talking about the Salaborsa library, opened in 2001, preserving 250,000 documents, including books, magazines, music, comics, maps and much more.

The Salaborsa is a unique place for its position (next to the Fountain of Neptune) and for its value as a gathering place of the young Bolognese. It is not only the main municipal library, but also includes a café and a crystal floor through which to admire archaeological excavations from the Roman era.

Another very popular library is that of Archiginnasio, the largest library in Emilia, preserving ancient manuscripts and offering a section dedicated to the culture of Bologna. Visit the "Teatro Anatomico", a wooden room built in 1637 for learning anatomy - with the incredible plaster statues of the "Spellati" (the "skinned ones").

If you want to browse books along with university students, take a look at the university library in via Zamboni 35, while cinema lovers will not miss the Biblioteca Renzi within the Cineteca, top choice for cinema and photography.

Yet a city that is hungry for reading also needs bookshops (perhaps independent ones).

1. Plan a day trip on the hills

The hills around Bologna are a favourite among locals, perfect for a day trip using public transport, a car or a Vespa.

They are located between the city and the Apennines mountain range, ideal spot for the Bolognese in search of adventure or relax.

The "colli bolognesi" (or "Bolognese hills") are suitable for every type of excursion: trekking, mountain biking, food and urban tourism (check out the villages of Monteveglio and Serravalle).

The most famous natural park is the Parco dei Gessi Bolognesi and Calanchi dell'Abbadessa, a protected area of ​​great value south of Bologna, famous for the calanchi (Paleolithic rock formations). Thanks to this geological feature, the area is full of caves that can be explored with a guide (we recommend the Grotta della Spipola and that of Farneto).

Adventure-seekers will find so many options for a variety of paths that wind through the gentle hills, to be done on foot or by bike: from the Piccola Cassia (an ancient Roman road) to the wonderful Via degli Dei, a path connecting Bologna and Florence (if you go don't miss Mount Adone). Or take the Bolognese section of the Gothic Line, the fortified line built by the Germans during the war.

If you prefer parks and historic villas, follow the locals and head to the park of Villa Spada with its Italian garden and the beautiful hilly park of Villa Ghighi, perfect for a relaxing walk in nature.

Finally, explore the fairy-tale castle of Rocchetta Mattei, an hour's drive from Bologna: discover the fascinating history of the building and enjoy the breathtaking view of the Apennines.

The Bolognese hills are dotted with farmhouses, taverns and starred restaurants that offer delicious regional dishes immersed in the quiet of the hills: one thing is certain, you will not go home hungry.