Festival of Saint Nicholas in Bari: all you need to know

Solemn functions and popular traditions set the scene for Christmas in Bari on December 6th dawn celebrating Nicholas, the 'saint of all people'.

Bari has always been a crossroads of different peoples and cultures, a feature that has distinguished it throughout its history, so much that the Orthodox Church lists it as a sacred city. It is not surprising that its Patron Saint is the one who most of all represents the union and brotherhood between West and East, worlds only apparently so distant: St. Nicholas.

Greatly worshipped all over the world especially by the Orthodox faithful, on December 6th in Bari the Christmas holidays officially begin by celebrating the 'saint of all people'. Tradition includes the celebration of a solemn Mass at the Basilica at the first light of the day, followed by a visit to the crypt where the relics are saved, the evocative torchlight procession and the pleasant breakfast having hot chocolate in the narrow streets of the old town.

You want to know more, right? You’re in the right place! Read on to find out everything you need to know about Nicholas and how to enjoy one of the most important festivals for Bari’s people.

The history of Saint Nicholas and his arrival in Bari 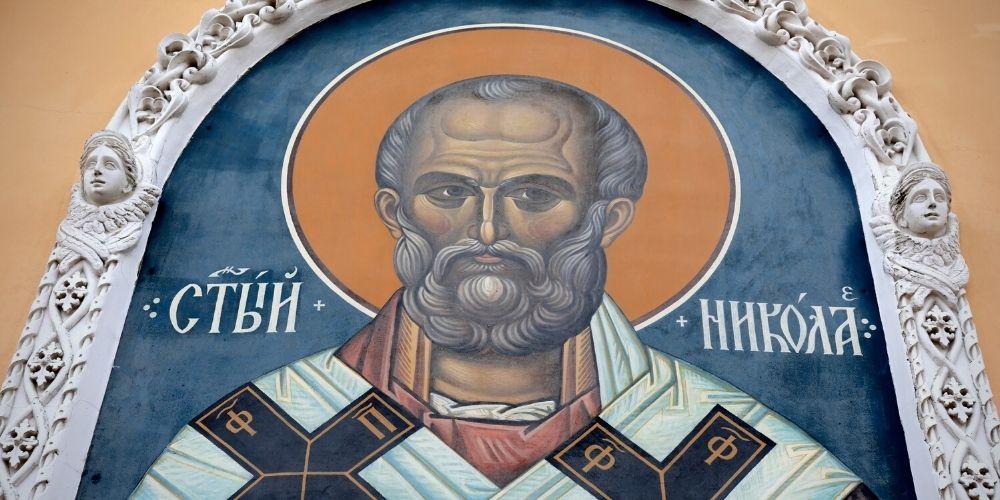 Not everyone knows that St. Nicholas, who lived between the 3rd and 4th centuries, was actually not a native from Bari indeed. His hometown was in fact Pàtara, in Turkey, and he is known above all for being Myra’s town bishop as well as protector of children, women looking for husbands and sailors and gifts, healings and miracles maker

Nicholas's story with Bari actually began only many years later, at the end of the 11th century. The relics of the saint were stolen in 1087 by 62 sailors from Bari of Norman origin and brought to the city, now the capital of Apulia, which at that time had just been conquered by defeating the Byzantines. In the same year, his Basilica began to be constructed and was completed about a century later; today it’s still a symbol of the city, a landmark of its historic center and seat of the crypt containing the relics brought from the East.

An action - the translation of the bones, celebrated on the Patron’s feast in May - perhaps not very noble in terms of manners, but which made the history of Bari and the Christian religion, getting the city out from an economic crisis and representing a link between the different schools of faith.

Saint Nicholas and faith: the holy Mass at the basilica at dawn 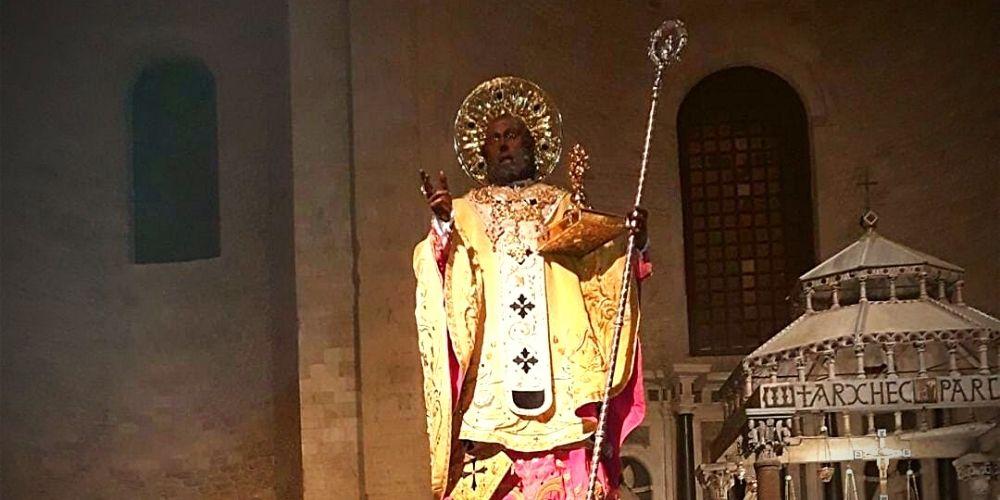 A verse that sounds with renewed enthusiasm on December 6th dawn, the day on which the city celebrates its Patron Saint and officially opens its doors to Christmas time - no wonder that St. Nicholas is associated with Santa Claus. And now it's time to dive into the heart of the festival.

The day begins very early with the celebration of the solemn Mass at the first light of the day, around 5 AM. The atmosphere is truly magical: the doors of the basilica turn open to the public in night time and life flows on the streets of the old town with the heat and the buzz of the many faithfuls who, punctual as every year, do not miss the appointment; an experience framed in a wonderful scene made of Christmas lights and decorations and the scent of breakfast that accompanies Bari at its awakening.

The next stage is the traditional visit to St. Nicholas’s crypt, in the underground area of ​​the Basilica, where his remains and other relics of the are saved, which are very important especially for the Orthodox faithfuls. One of the most interesting and evocative cult objects, both for religious and popular culture, is the column of miracles: made of reddish marble, according to legends it was found on the seashore in the night between September 30th and October 1st 1089 - the day when the bones were put and saved in the newly built crypt - maybe coming from Constantinople or Myra itself for the will of the Saint; however, no one was able to transport it and legends said that Nicholas himself installed it as the basis for the construction of his Basilica.

But why is it miraculous? The ancient popular ritual of zitelle reveals the mystery. It is a very ancient tradition rooted in local culture: women who were still unmarried asked the Saint for a grace by touching the surface of the column and turning around it three times in a row. It is probably just a legend, but many people swear they have found a soulmate this way. Today, however, this popular tradition is no longer in use since, for reasons of safety of the heritage, the column was protected by a solid metal cage. Anyway, the most determined faithfuls have not completely abandoned the tradition and keep it alive by leaving personal notes at the foot of the marble pillar.

Saint Nicholas and tradition: the torchlight procession and the hot chocolate

While the Mass is being celebrated within the walls of the old town, a typical tradition of the festival occurs in the main streets of the city: the Nicholas torchlight procession. The long march, specific for the most athletic faithfuls who want to celebrate the Saint in a dynamic way, lights up the city with bright torches starting from Parco 2 Giugno, in the heart of the city, to reach the yard of the Basilica. It is a real city pilgrimage in honour of the Saint.

But would it be a festival without any sweet surprise? The food tradition on December 6th in Bari does not miss anything and, at the end of the Mass and with the arrival of the torchlight runners, the most awaited moment arrives, especially for children: the hot chocolate St. Nicholas breakfast, served to visitors by the inhabitants of the Old Town, accompanied by typical Christmas sweets and some of the main local street food, such as sgagliozze and popizze.

The day of celebration lasts until evening and the lighting of the city tree decorations in Piazza del Ferrarese definitely marks the coming of Christmas time. For many people in Bari this is also the perfect time to decorate the house and to celebrate with a panzerottata.

The cult of Saint Nicholas in the world 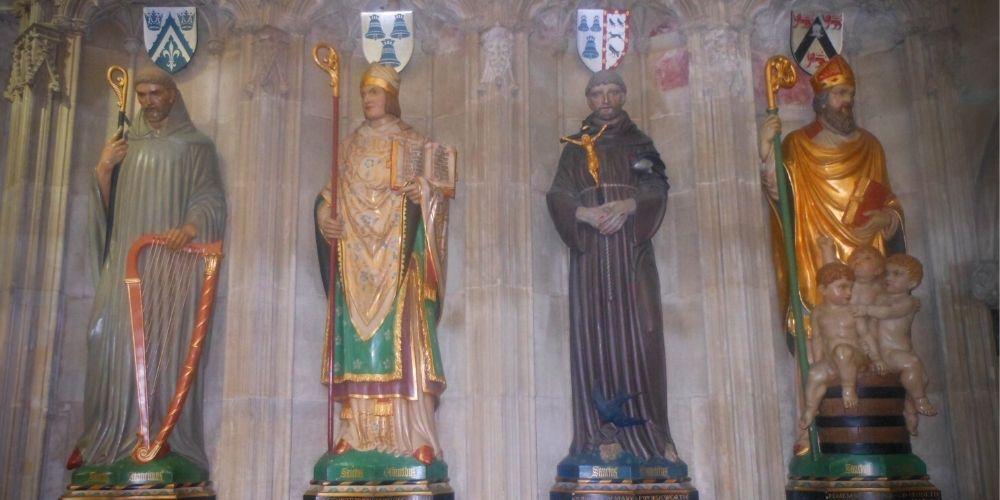 A statue dedicated to St. Nicholas (the last on the right) is located in the Cathedral of Salisbury, in England.

No wonder St. Nicholas is the most worshipped Saint in the world and his figure is connected to some typical folklore tales: Ded Moroz or Grandfather Frost in Eastern Europe, Father Winter in the Germanic lands, Sinterklaas in the Netherlands - all alter egos of the well known Santa Claus, also known as Saint Nicolaus, a name related to the emigration of European faithfuls to America

All over the world, many churches were built to honour the Saint, both Catholic and Orthodox: the cult of Nicholas has spread especially in Russia and Eastern Europe, Greece, Bohemia, Turkey, Western Europe (Netherlands, Flanders, Germany and England), Northern Europe (Denmark and Iceland) and North America. A particular case concerns the New York church and its tragic past: its location close to the World Trade Center, unfortunately, did not spare it from the destruction unleashed by the terrorist September 11th 2001 attacks; it was later rebuilt and on its official website it’s clearly published the hashtag #rebuildmychurch, a message which aims to convey peace, hope and resilience.