Feast of the Immaculate Conception in Italy: traditions, gastronomy and curiosities

The Christmas season begins, officially, on 8 December, the Feast of the Immaculate Conception. All over Italy, preparations are underway to celebrate Christmas Day with families and loved ones.

8 December, the Feast of the Immaculate Conception, is traditionally the day on which all Italians decorate the tree, build the crib, start shopping for Christmas presents and get together with their families for the "starter meal" for the following holidays.

In reality, it is, above all, a religious holiday.

The Immaculate Conception is a Catholic dogma, a universal truth, proclaimed on 8 December 1854 by Pope Pius IX with the bull "Ineffabilis Deus".

On this day, it was established that Virgin Mary was preserved from original sin from the moment of her conception.

It is no coincidence that 8 December was chosen as the date nine months before the day of Mary's birth, 8 September.

The country you go, customs you find 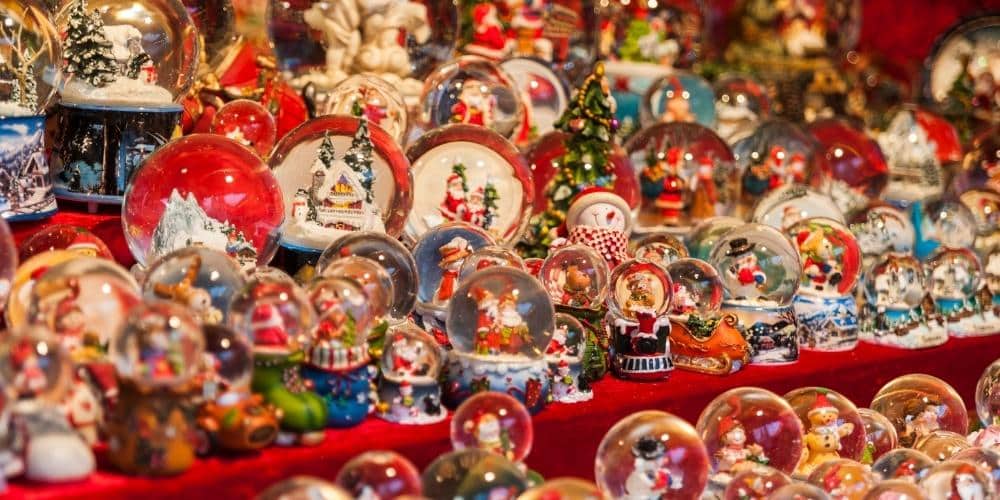 Although it is a religious holiday, it is a national holiday in Italy. It is the perfect opportunity to visit Italy's main art cities to discover new exhibitions or wander around the traditional Christmas markets.


Public offices, banks and post offices are closed. All shops are open and it's the height of the Christmas decorations in shopping centres as well as on city streets.

It is the ideal opportunity to indulge in a trip to typical Italian villages and breathe in the warm, family atmosphere of the Christmas season in front of a blazing fireplace in an Alpine hut.

Traditions in Puglia: the Bonfire of the Immaculate Conception

Puglia has always guarded many solid traditions and rituals. The Feast of the Immaculate Conception is a much-awaited occasion, celebrated by lighting a huge bonfire, one of the oldest Puglia traditions involving young and old.

The fire, in this case, is not just a ritual but takes on different meanings. Some believe the Madonna used it to dry the clothes of the baby Jesus. On the other hand, others see fire as a symbol of the elimination of original sin, to be burnt as a propitiatory rite wishing fertility to the land.

On the night between 7 and 8 December, fires are lit all over Apulia in honour of the Immaculate Virgin. Referred to by various dialect expressions, such as "fanova" or "u fame", they are intended to purify.

But the fire has always meant family unity, the so-called "home hearth", so these large bonfires can only be traditionally accompanied by tastings of typical Apulian dishes and wines.

Every respecting Apulian family fries "pettole" or "pittule". They are cakes made of well-leavened bread dough, which in the past were cooked in the fireplace, traditionally filled with ricotta cheese, tuna, capers and tomato.

They are prepared on the feast of the Immaculate Conception and again on Candlemas, accompanied by an excellent vincotto made by grapes or figs. A real treat for the palate!

Another delicacy is the typical Apulian "Puccia" on Immaculate Conception Day, a small bread roll filled with breadcrumbs and served with tuna and "Swiss" cheese.

Now all that's left to do is to go to the table in beautiful Puglia and enjoy "Baccalà in pignata con patate" and "grano cotto nel sugo" for a day of conviviality.

Traditions in Campania: faith and art

Campania is deeply linked to the celebrations in honour of the Virgin Mary because it is said that at the end of the 19th century, a heavy storm broke out at sea in Naples.

A single man on his fishing boat saved himself by floating out to sea, clinging to a wooden log and praying to the Virgin Mary. Once he was safe, the man felt miraculous and told everyone that the Immaculate Conception had saved him.

Every year on 8 December, firefighters, civil and religious authorities pay homage to the Virgin Mary with a bundle of flowers carried to the Obelisk of the Immaculate Conception in Piazza del Gesù, an imposing monument of Marian devotion in the centre of the city.

Naples dresses up for the festivities, with lights and the traditional fairs of San Biagio dei Librai and San Gregorio Armeno.

Strolling through its streets is fantastic on this day. It is an opportunity to visit the beautiful open churches, listen to famous and Christmas music concerts, and participate in the many art and folklore initiatives in the different districts.

The "Rione Sanità", in particular, is even more atmospheric at this time of year, thanks to its decorations and illuminations.

Immacolata Day, therefore, is an opportunity to discover traditions and celebrations, where faith and art come together in the Neapolitan Christmas atmosphere.

A sweet tradition has taken root on 8 December, whose protagonist is the "Roccocò" in this atmosphere.

This cake traditionally closes the Immacolata lunch of Neapolitan families. Typically baked and filled with almonds and spices, it has a unique flavour.

It was the nuns of the Real Convento Della Maddalena who, in 1320, came up with the recipe for this biscuit, which immediately became a typical Neapolitan Christmas cake.

Roccocò derives from the French "Rocaille" and refers to its shape, which resembles a rounded shell. It is usually a hard biscuit, so it should be soaked in vermouth or accompanied by a good Passito wine.

Gastronomy on the 8th December

The Feast of Immaculate Conception is the occasion for all Italians to get together for the first meal to share all and kick off the Christmas festivities. It involves large tables and "binges" in a company, with traditional dishes.

If you are in Basilicata, in Matera, on this day, you must try the famous Tarallo dell'Immacolata, also called pan di tarallo or "Ficcilatidd" in dialect.

"Ficcilatidd", from Latin "fiscus", meaning basket. This term indicates the basket in which loaves of bread were placed in the past. It is a ritual that has been handed down for centuries.

Even today, on 7 December, many families in Matera observe the "Vigil fast" and prepare for the feast on the following day.

For lunch on 8 December, children up to the age of eight and the elderly are excluded from this fast and appease their appetites with these biscuit-shaped taralli with fennel seeds, while adults eat it by dipping it in red wine.

This ritual is just a preparation for the Immaculate Conception dinner. There is a unique traditional menu that includes cod, the fish that was once considered less expensive, cooked in a stew or fried, preceded, today, by a portion of spaghetti with garlic, oil and chilli pepper. How to resist!

Obelisk of Virgin in Rome

If you are in Italy and want to dream of the Feast of the Immaculate Conception, there is no other destination than Rome, the Eternal City.

The capital is illuminated with lights, stars and, above all, trees. A magical combination of history and spirituality welcomes visitors in a unique Christmas atmosphere.

In Rome, 8 December is an essential and, above all, spiritual holiday. Traditionally, the most awaited moment was the veneration of the statue of the Virgin in Piazza Mignanelli at the presence of the Pope and authorities and the flood of believers.

Once again this year, instead of the usual public event, to avoid crowds, it will be only the Pope, in a private act of devotion, who will pray to Our Lady to protect the Romans, the city in which they live, and for the sick throughout the world.

Spending the feast of the Immaculate Conception in Rome is the perfect way to combine the sacredness of the occasion with culture and fun that can please young and old alike.

Preparations are in full swing in Piazza Venezia for the traditional lighting of the Christmas tree and illuminations in Via del Corso every year on 8 December. This is a much-awaited recurrence by Romans and tourists in the city on this day.

The Romans used to name each tree, such as "Spelacchio", the rather bare tree, or "Spoiler", the Netflix tree.

What will be the name of the Christmas tree 2021?

Also fascinating will be the tree in Piazza San Pietro, which this year comes from Andalo, Trentino, and will be lit on 10 December. It is a majestic 113-year-old spruce tree, 28 metres tall, whose beauty has been preserved despite the journey to the Vatican.

This marvellous fir tree will light up St Peter's and add charm to this eternally beautiful square during the festive season.

Next to the tree in St. Peter's Square is the famous nativity scene, with life-size statues from a different part of the world each year. Wonderful!

For romantics and in search of intimacy, the perfect thing is to stroll illuminated by lights of the Christmas tree next to the Colosseum in an unparalleled Christmas atmosphere.

After an aperitif in the shadow of the Colosseum or a carbonara dinner, it's the perfect time to admire the beauty of the illuminated Eternal City, for a tour of the lights in Rome's most famous shopping streets.

The 8th of December in the heart of the Dolomites 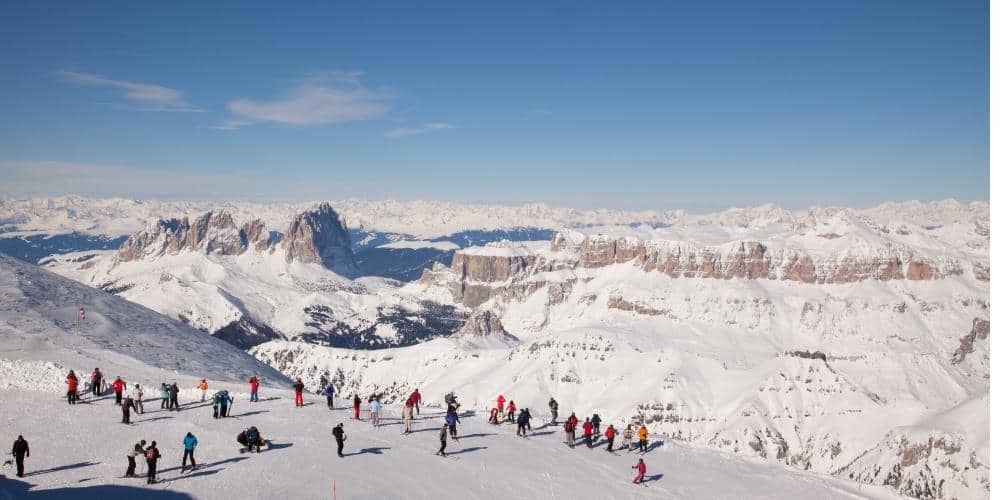 For the more sporty and daring, it is the perfect time to come to Italy and reach what is known as the highest peak in the Dolomites: the Marmolada.

Precisely on 8 December 2021, for the feast of the Immaculate Conception, the ski slopes are going to reopen in Marmolada, the Queen of the Dolomites, which comes back to life from the feast in honour of the Queen Mother of the Catholic Church.

It is a skier's paradise, a perfectly snowed-in ski resort that hosts the longest slope of the Dolomitic Superski circuit with 12 km of development across the Marmolada glacier down to the Fedaia Pass then up to Malga Ciapela.

The "Move-To-The-Top" cable car takes you up to the panoramic terrace of Punta Rocca, where you can see all 9 UNESCO Dolomite systems. A fantastic place!

To end the day in the mountains, do not miss a visit to the Marmolada Great War Museum, located at 3000 metres and defined as the highest Museum in Europe.

With free admission, you can access an interactive exhibition space that allows you to learn about the tragic experience of the First World War, which was fought, amidst snow and frost, at high altitudes.

These are just some of the traditions that each region of Italy holds for the Feast of Immaculate Conception.

All that remains is to experience them in person!