All about Gelato Day. When to celebrate, what are the fanciest flavours and why Italy is the protagonist of the 2022 edition

Simple gourmands or authentic gelato masters, for ten years now all the lovers of the artisanal gelato, a delicious, complete and healthy food, have had a day entirely dedicated to their sweet passion.

The European Day of Artisan Gelato is a feast for the palate, but in Italy it's also something more. It's an opportunity to enhance the talent of the gelato artisans, who every day give life to one of the most loved desserts of the Italian culinary tradition. Between classic or incredibly imaginative flavors, traditional recipes or recipes created specifically for the occasion, in Italy all the enthusiasts have many good reasons to celebrate. 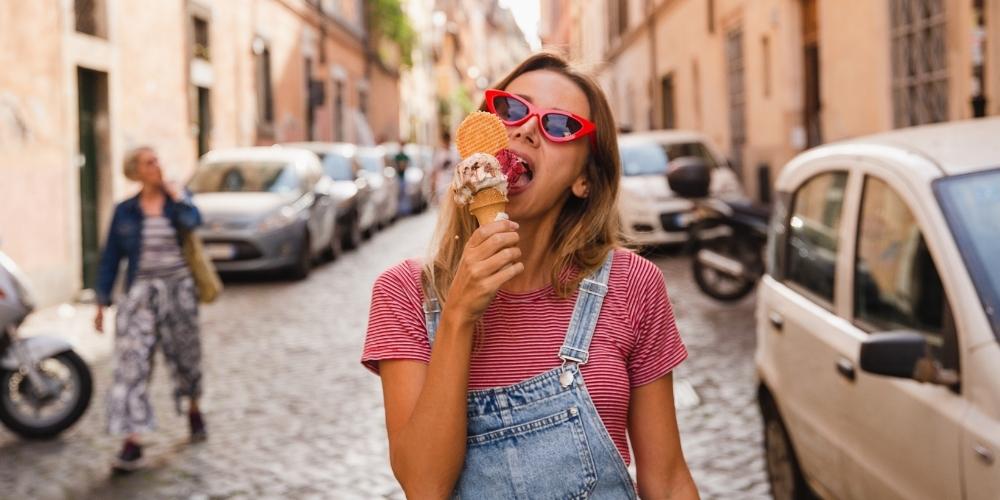 Gelato, although in a very different form from how we know it today, boasts a millenary history, but tradition has it that in its modern version it was invented by the Italian Bernardo Buontalenti to please Caterina de' Medici. Apparently that fresh, delicious "discovery" enchanted all of Reinaissance Florence, but it was only later that gelato met its true fame, thanks to the Sicilian Francesco Procopio dei Coltelli, who exported it to France at the end of the XVII century.

From that moment on, gelato's popularity has only grown, until, starting from 2009, it has also attracted the attention of the highest institutions. In fact, the European Parliament has instituted the Gelato Day because, as stated in the official motivations, "among fresh dairy products, artisanal gelato represents excellence in terms of quality and food safety".

To date, Gelato Day is the only official "holiday" dedicated to food. Every year Europe celebrates it on March 24th.

The European Day of Artisan Gelato, as the name suggests, celebrates homemade gelato. Italy is particularly fond of its own, which differs from ice cream in terms of ingredients and manufacturing process.

There are now almost 40,000 artisanal gelato parlors throughout the territory and the sector never suffers. Thanks to the mild climate, in various regions of Italy and particularly in the south, the gelato season lasts basically 12 months a year.

There are some very specific characteristics that distinguish an authentic Italian artisan gelato from its industrial version. The lower amount of fat, for example, but also the smaller amount of air incorporated during processing. Milk and cream, the protagonists of the basic preparation, must be very fresh and the additional ingredients, from which the various flavours are born, of excellent quality, to guarantee unparalleled taste and aroma. These are the traits that make artisan gelato creamier, tastier and healthier, unmistakable thanks to its velvety texture.

Furthermore, an artisanal gelato also stands out because it tends to melt more quickly and has dull colors, unlike industrial products where dyes are often abundant.

Generally it's produced by the retailers themselves, to shorten the supply chain and ensure that the gelato is always kept at the optimal temperature.

To underline the great importance of the tradition of Italian gelato masters, the idea of ​​obtaining a recognition from UNESCO for "The Art of the Italian Gelato Maker" is gaining ground more and more often. A bit like it has already happened for the art of Neapolitan pizza makers.

Fantastic flavours and where to find them

Italian cuisine is passion, tradition, but also imagination and, perhaps, a pinch of audacity. This, of course, also applies to gelato, which can be found in such a variety of flavors that it'd be impossible to count them all. Besides, new ones are invented on a daily basis.

The timeless classics are of course vanilla, chocolate, hazelnut, or coffee. Then there are the flavours derived from other cakes or sweets protagonists of the Italian tradition, such as the Sicilian cassata or the Neapolitan babà, and of course there is also tiramisù, chosen as the flavor of the year on the occasion of the Gelato Day 2019.

The curious and the fearless can celebrate Gelato Day tasting some really unusual flavours. The pizza flavor, for example, which could only be born in Naples. Here is where a recipe based on tomato, oregano, garlic and mozzarella was invented, with pizza crumbs and San Marzano tomato jam to complete.

In Milan, on the other hand, wine gelato was invented, both white and red, made from the best wines of the region, including, for example, Franciacorta or Moscato.

Parmigiano Reggiano, another excellence of Italian cuisine, has also been transformed into gelato. It's a real taste experience, slightly salty but definitely not sweet, with a strong taste, often served with croutons instead of the classic cone, for a more suitable and tasty combination. It's widespread in the same production areas as the cheese from which it derives, Emilia Romagna.

Rosemary gelato is not particularly sweet either, in fact it goes well with meat dishes. It's also perfect as a quirky dessert, though, often paired with hazelnuts and nougat. It can be found in the most well-stocked gelato parlors, or on the occasion of the most chic lunches.

In Rome you can also find salmon gelato, or strawberry and pepper gelato. A flavor that certainly arouses curiosity, the last one, yet this apparently unusual combination already exists, as jam.

Actually, when it comes to the creativity of Italian gelato masters, sky is the limit. Throughout Italy, with a bit of luck, you will come across gelato shops that serve the most eccentric flavours, including the imported ones, such as wasabi or curry.

Of course, there are also many variations to meet the needs of those suffering from food intolerances, because good food is everyone's heritage and has always been an opportunity for joy and sharing.

Every year, in order to celebrate Gelato Day, initiatives and events are organized with the aim of enhancing artisanal gelato and contributing to the conservation of this important gastronomic tradition.

Each of the countries of the European Union, in turn, is also entrusted with the task of choosing a particular flavor, which will be the symbol of the event for one year, available in all the gelato parlors participating in the day.

However, 2022 is an important year, in fact the first 10 years of the International Day of Artisan Gelato are also celebrated. For this reason, this year a special competition was launched in which all the master gleato makers of Europe challenged each other. The Jury, after evaluating each different recipe on the basis of taste, structure, originality and aesthetic presentation, chose the flavor of the year.

The winner was Dolce Sinfonia, Sweet Simphony, prepared according to a recipe signed by the Italian gelato master Silvia Chirico. On March 24, 2022, all throughout Europe, you will be able to taste this hazelnut and chocolate-based delight, with the addition of typical products of the region of its creator, Campania, such as fresh ricotta cheese and figs in rum syrup.