Viterbo: things to see in the city of the Popes

With its medieval quarter, its numerous churches and its fountains, the city of Viterbo is one of the most evocative places in Upper Lazio. Getting lost in its alleys is the best way to savor its history and enjoy its monuments. And to conclude, you cannot miss a visit to its ancient thermal baths, famous since the Etruscan era.

Viterbo is a city with an important history. Its past is breathed in the churches, and fountains and its stairs. An opportunity to go back in time and enjoy its ancient majesty.

The history of Viterbo 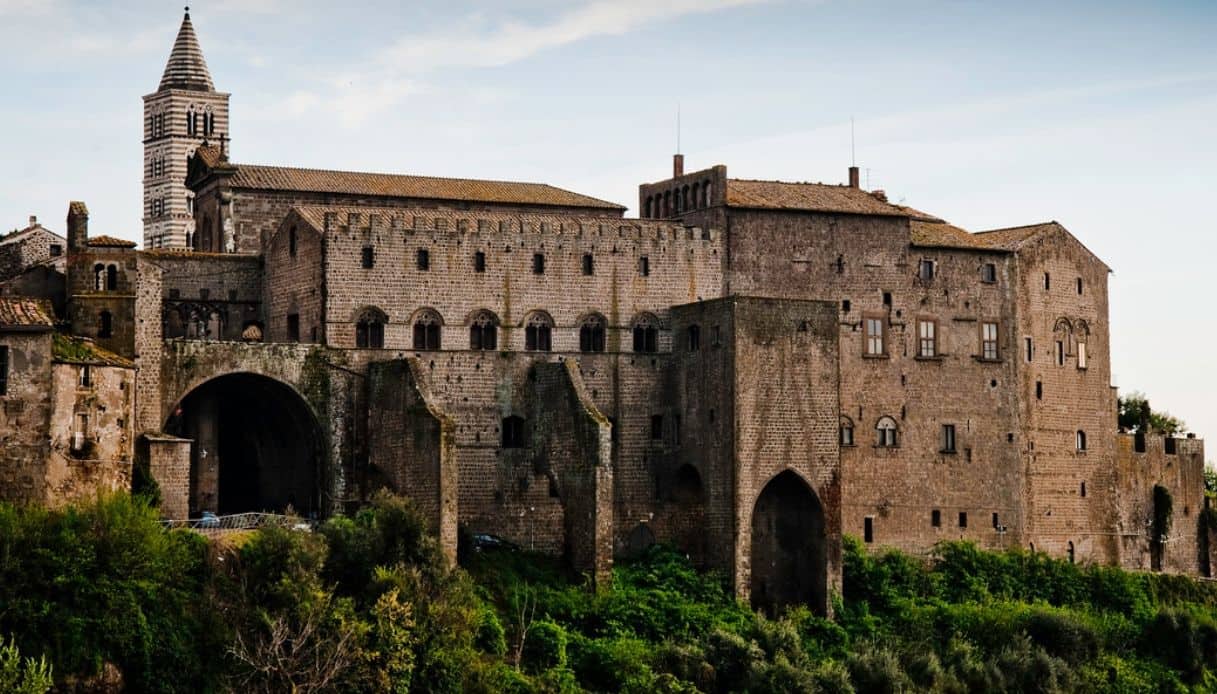 Although of very ancient origins, the city of Viterbo became a real urban center in the Etruscan era.

The Etruscan name of the city, Surina, was due to the presence, according to their beliefs, of the God Suri. The city soon expanded until the Roman period when it took the name of Sorrina Nova, becoming an important Latin center.

With the fall of the Roman Empire, the Lombards settled in the territory and created the Castrum Viterbii to strengthen the defense of their kingdom.

During the Middle Ages the importance of the city continued to grow and, in 1145, it was even chosen as the papal seat by Eugene III.

The thirteenth century will be the one of maximum splendor of the city of Viterbo. Once again Pope Alexander IV in 1257 moved the papal court here. With the coming of the popes, new churches were built such as Santa Maria in Gradi and the Church of the Holy Trinity, but also public structures such as the Palazzo dei Consoli and the Palazzo del Capitano del Popolo and the famous Papal Palace.

Following the unification of Italy, Viterbo thus lost its autonomy and became a municipality in the province of Rome until the Viterbo province of which it is currently the capital was established. 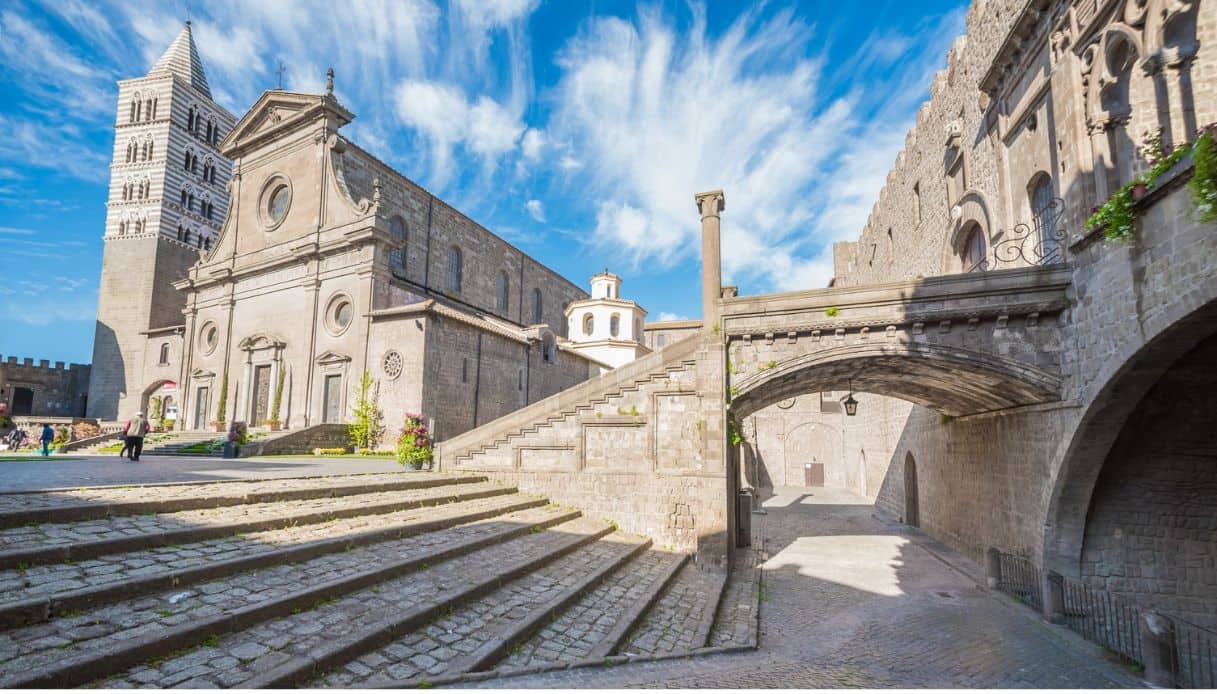 Obviously, in the city of the popes, churches cannot be missing. Among these, it is impossible not to mention the thirteenth-century Cathedral where the 8 popes elected in Viterbo were crowned and where Corradino di Svevia, heir of Frederick II, was excommunicated. Also worth visiting is the church and monastery of Santa Rosa from which, every 3 September, the "Machine of Santa Rosa" starts, a procession in which a 30 meter high canopy with a statue of the saint on top is carried around the city. The small Church of San Silvestro, built before the year 1000, is also worth a visit, as is the church of Santa Maria Nuova where the people's meetings were held and the municipal finances were kept. Viterbo is also famous for its fountains. Most of Viterbo's public sources date back to the medieval period. They were the centerpiece of the town and there are still various types: those with a rectangular basin used as drinking troughs, located near the city gates; or those with a monumental shape located at the point of separation between the area pertaining to the parish and the road.

Among the palaces, the most famous is certainly the Palazzo dei Papi, built in the mid-1200s and decorated with a beautiful loggia also called "of the blessings" because the popes looked out from here to bless the people. Palazzo dei Priori is made famous by the sixteenth-century Sala Regia and its beautiful frescoes. 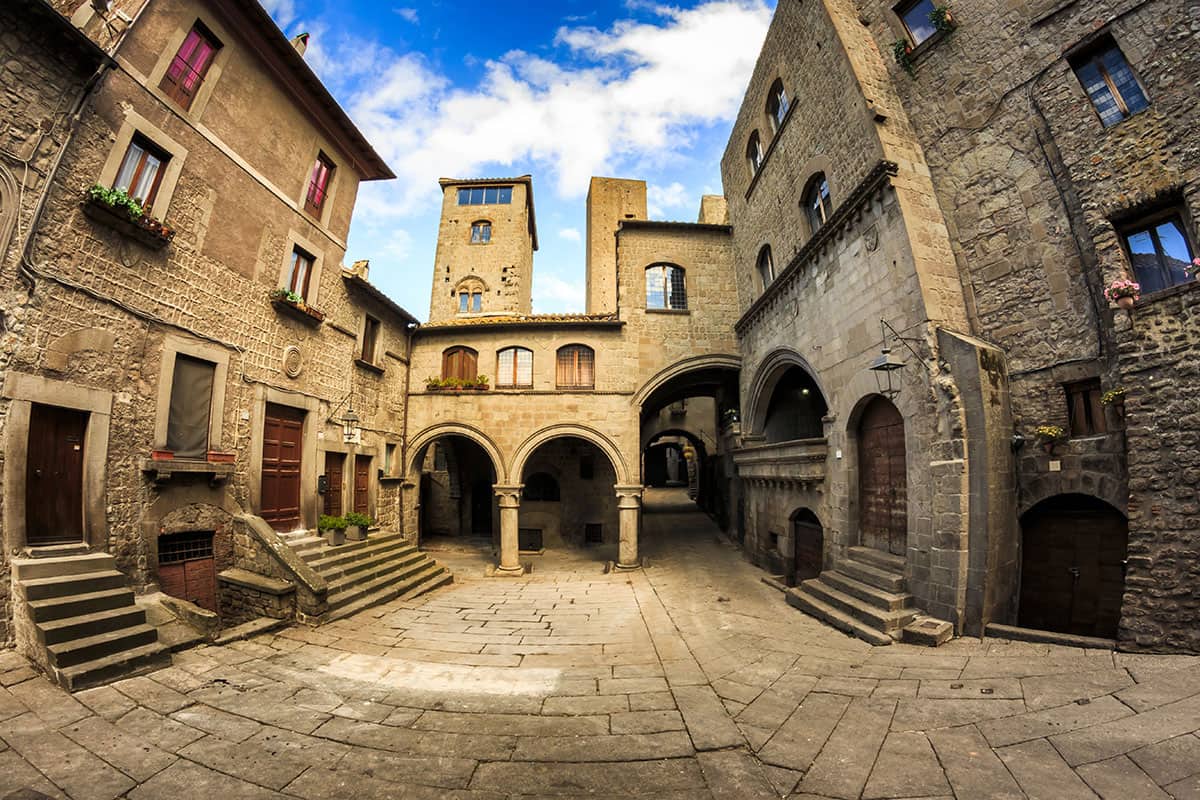 Viterbo has the largest medieval historic center in Europe. You can access the San Pellegrino district from Piazza San Carluccio. To the right of the fountain of San Carluccio opens the via di San Pellegrino, which is the main road axis of the medieval quarter. Characteristic of the neighborhood are the "profferli", particular external staircases that lead to the access landing of the houses and the so-called "bridge house": a type of house that unites two buildings, separated from the road, at the height of the first or second slowly, creating suggestive passages.

The Palazzo degli Alessandri, built in the first half of the 13th century, overlooks the square of San Pellegrino. and the 11th century Church of S. Pellegrino. A walk in the neighborhood is a must to be able to grasp the true essence of the ancient village. Linked to the legend that Hercules who drove a huge pole into the ground giving rise to pure water, the thermal baths of Viterbo have very ancient origins. The thermal baths were already very famous in Etruscan times, but it was under the Romans that they became increasingly popular, especially among the families of wealthy patricians. After a period of neglect in medieval times, the use of the springs resumed in the 13th century for therapeutic purposes. It is said that Dante Alighieri himself found himself passing through Viterbo and, struck by the grandeur of the Viterbo baths, he spoke of it in the Comedy ("Inferno", XIV, 79-81). The use of the baths has continued to this day. Still, among the most important springs, we mention: the Baths of Masso or Massi di S. Sisto, the Baths of the Jews, the Baths of the Zitelle and the Baths of Bacucco.

In the surroundings of Viterbo, there are many attractions as naturalistic as cultural, as historical as architectural: this territory is defined "Tuscia Viterbese". In general Tuscia, a territory corresponded to ancient Etruria, is currently located between northern Lazio, Tuscany and western Umbria. To be guided in these places, you should rely on local experts such as Tusciamo, an incoming tour operator who will know how to let you fall in love with Tuscia. Tusciamo's operators and guides will take you on very original tours to discover this territory: from Viterbo to Montefiascone, from Lake Bolsena to Mars and Capodimonte.