The 5 most beautiful lakes in Lazio

The 5 most beautiful lakes in Lazio where you can spend your holidays away from the noise of the city and enjoy the spectacle they offer in peace and quiet.

The Lake of Nemi

Lake Nemi is in the heart of the Castelli Romani, of volcanic origin and 25 metres higher than Lake Albano. From Nemi you can also admire the village of Genzano.

In ancient times Lake Nemi was the place where the Ancient Romans spent their holidays.

There was located a place of worship of the Goddess Diana in the woods, in fact Nemi comes from NEMUS DIANAE.

The Lake of Nemi is also well known because, in the bottom of the lake, two Roman ships have been found. Around 1400 the fishermen saw very valuable ancient pieces coming to the surface, so someone went to see what was on the bottom, and they discovered that there were two gigantic ships.

In 1928 the ships were recovered, and to bring them to the surface a conduit was used that had existed before Roman times to regulate the level of the lake. The experts lowered the lake level by about 20 metres and succeeded in extracting the ships. The ships were built by Emperor Caligola, and one of the ships was 73x25 metres in size and was supposedly a temple covered in mosaics and with a roof of gilded copper tiles. The second ship was supposedly the Palace ship where the Emperor lived and was towed by the Temple ship. The ships were unearthed and place in a museum. In the war of 1944 there was a fire in the museum and the ships were destroyed and today only a few remains can be seen.

Nemi is also called the 'city of the strawberry' because around the lake there are greenhouses where wild strawberries are cultivated. Since 1922 in the first week of June there is the strawberry festival in Nemi and in all places you can taste strawberry sweets and liqueurs. Lake Albano is 168 metres deep, 3.5 metres long and 2.3 metres wide and is 293 metres above sea level. It is also of volcanic origin and is close to Lake Nemi on the hills of the Colli Albani.

On the shores of the lake you can see archaeological remains of the ancient Romans such as the VILLA ALBANA of the Emperor DOMIZIANO and the VILLAGGIO DELLE MACINE. In the time of the Ancient Romans, naval battles took place on the lake. The story goes that around 398 BC the Romans had a 1450 m long tunnel built through the walls of the crater. The tunnel was like an emissary that received water when the lake level rose and was also used to irrigate the farmers' fields and supply the wash houses of Castelgandolfo and Albano.

On the shores of Lake Albano there are bathing establishments where you can bathe in peace. There are restaurants and bars where you can taste local specialities. In some parts of the lake there are rowing schools, in fact Lake Albano is very well known because in 1960, there were the Olympics of Rowing.

Lake Bracciano is located 35 km north of Rome. It is 9,3 km wide and 8,7 km long. It is 164 m above sea level and about 160 m deep. The surrounding towns are: Bracciano, Anguillara and Trevignano Romano. The lake was not formed in the crater of a volcano but was formed by the collapse of a summit wall of the volcano where a large chamber was formed that fed the various volcanoes in the vicinity, which then over time emptied and the lake was formed. Nearby is Lake Martignano, which was formed in the crater of the volcano. Below Lake Bracciano there are underground springs from which the lake is fed, but it also has an emissary river, the River Aronne.

On the lake you can practice sports such as sailing, canoeing, and scuba diving, and then on the coast you can make excursions to discover the natural beauty.

The village of Bracciano has about 19,000 inhabitants and is located 40 km from north Rome in the Sabatini mountains. In the village there is the medieval Orsini-Odescalchi Castle. Today the castle is open for major events, but there is a part dedicated to the museum where there are medieval weapons and armour.

There is also a museum in Bracciano where there is a collection of very old medieval artefacts that were part of the inhabitants of the village.

In Bracciano there are two annual celebrations attended by many tourists, the Passion of Christ and the Infiorata Corpus Dominus, where the florists of Bracciano show their skill in covering the streets with majestic designs.

Lake Bracciano and its village is a place where you can spend your holidays in serenity away from the noise of the city. 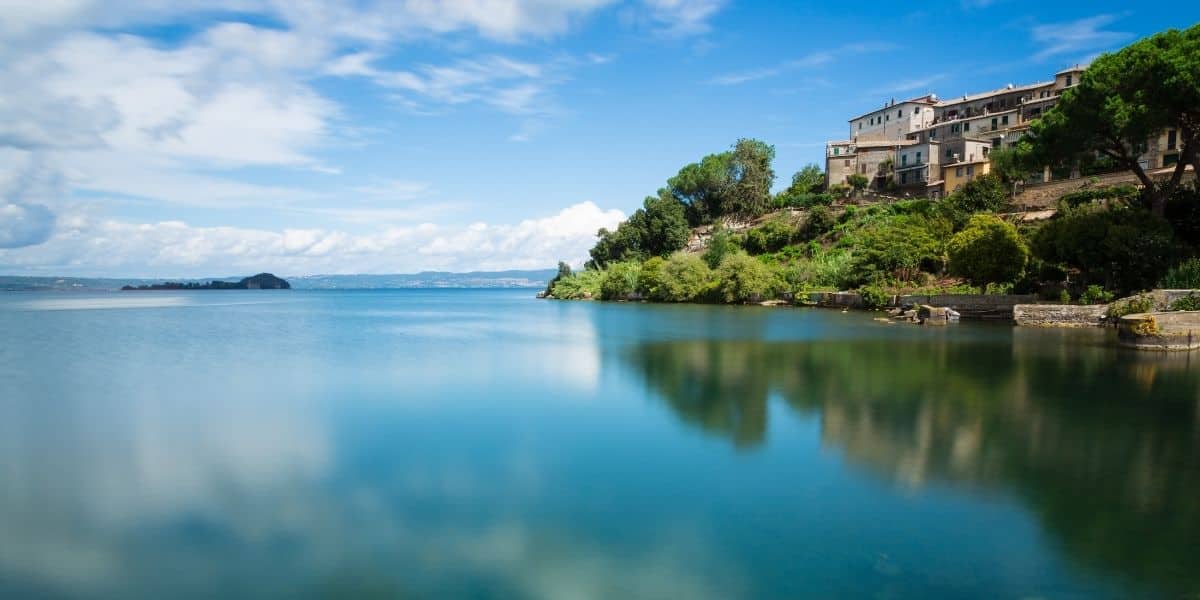 Lake Bolsena is situated between the Volsini mountains in the province of Viterbo, and is the largest lake of volcanic origin in Europe. It has a length of 13 km. And a length of 11 km, its depth is 151 m, it is 305 m above sea level.

The shores of the lake are sandy with a black colour derived from the disintegration of the rocks of the volcano, there are quiet shores where you can enjoy your holiday. In some parts of the lake there are vegetable fields, vineyards and olive groves, and there are places to fish.

There are two islands on Lake Bolsena, Isola Martana and Isola Bisentina. Isola Martana is uninhabited, and in the past there was the convent of the Augustinians. On the Martana Island, in the distant 535, Amalasunta, daughter of Theodoric, King of the Goths, was killed by her cousin Theodatus. In a part of the island there is a plaque to remember her.

Today the island is privately owned so it cannot be visited, but by taking a boat from Bolsena or Capodimonte, you can sail around it.

The Bisentina Island is larger than the Martana Island and is part of the municipality of Capodimonte. On the island lived Giulia Farnese who was the sister of Alessandro Farnese who later became Pope Paul III, the Pope who made the Council of Trent who approved the rule of the Jesuits, the Pope who approved the rule of the Holy Office. There are 7 small churches on the island that were built between the 15th and 16th centuries.

All the villages surrounding the lake have a history of Popes, Kings, Poets and Philosophers. All year round Lake Bolsena and its villages are visited by thousands of tourists to see this magnificent and fascinating lake. The cuisine of Lake Bolsena is mainly based on fish that is caught fresh in the lake, such as the soup "Sbroscia" that fishermen used to make with fish scraps, and other vegetable soups. There is also fresh homemade pasta such as "Lombrichelli e Fettuccine". The main courses are mainly fish dishes such as fried Perch Fillets or served with other sauces, Lake Bass and other fish from the lake. But meat also has a place on the menu, such as pork from which they make porchetta (roast suckling pig), sausages, roast or grilled lamb, and then there are the beef dishes such as coda alla vaccinara (oxtail), tripe stew, pagliata and coratella, naturally accompanied by good local wines. 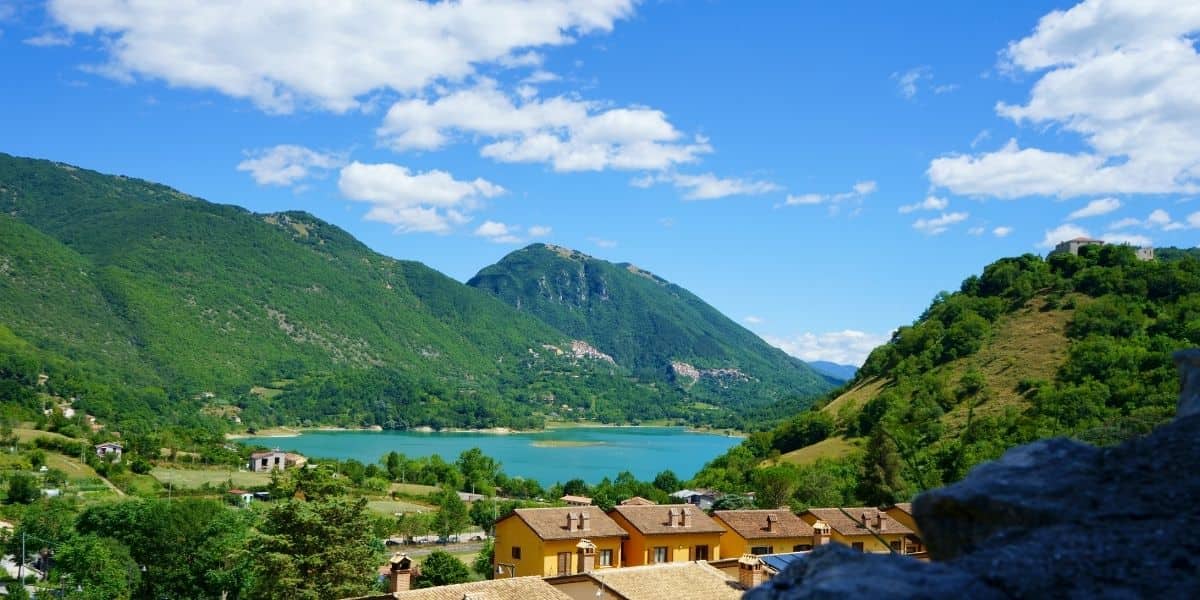 Lake Turano is located in the province of Rieti and is situated on the edge of Mount Navegna and Mount Cervia. Its altitude is about 536 m above sea level on the course of the river Turano. It is 8 km long and 3 km wide with a maximum depth of 68 metres.

Lake Turano is of artificial origin, in 1939 the Turano dam was built to produce hydroelectric energy, and they built the lake to avoid the floods of the river that inundated the plain of Rieti. Next to Lake Turano is Lake Salto, which was built at the same time. The two lakes are connected by a 9 km long underground tunnel. Together they feed the hydroelectric power station of Cotilia.

On the shores of Lake Turano are villages with ancient castles, such as Colle di Tora, Castel di Tora and the village of Antuni, as well as the villages of Ascrea and Paganico Sabino.

Lake Turano has often been the location for films and videos for television. On the lake you can practice water sports and excursions in the territory of the Regional Natural Reserve of Navegna-Cervia, and you can also practice acrobatic paragliding.

The cuisine of Lake Turano is typical and genuine, with recipes from the province of Rieti made with the main products truffles and mushrooms, such as Tagliolini al Tartufo (noodles with truffles), as well as fish from the lake and local meats such as wild boar. These dishes are also accompanied by local wines.