Etruscan Necropolises of Cerveteri and Tarquinia: UNESCO Site since 2004

An excellent example of sepulchral art, the Necropolis of Tarquinia and Cerveteri, are the window on the past of a glorious civilization: the Etruscans. Both archaeological areas of Latium merged into a single site and became part of the UNESCO World Heritage List in 2004.

The Etruscan civilization in Latium 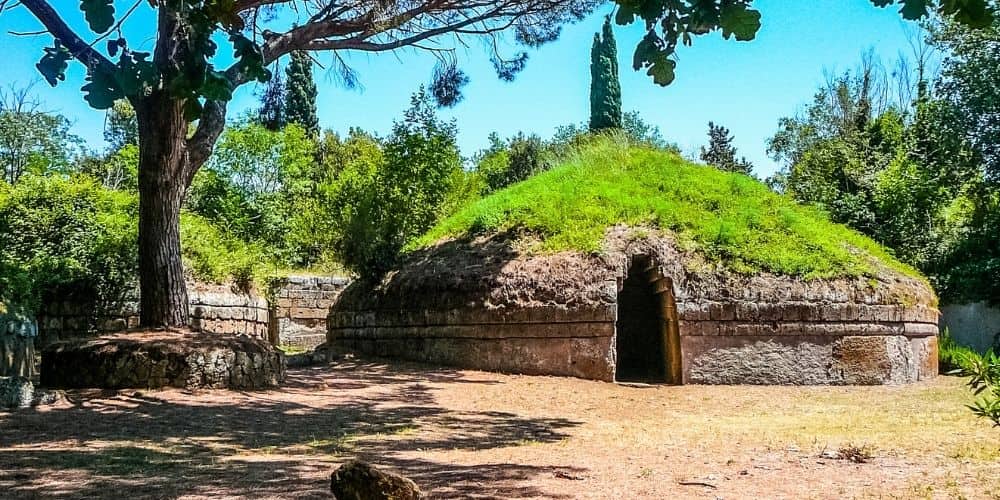 Latium, a region steeped in history and culture, is usually associated with the Roman civilisation, which has undoubtedly left an indelible and profound mark, shaping and handing down countless testimonies and treasures. However, we should point out that the Romans were not the only population to influence the destiny of the people of Lazio. The Etruscans played a fundamental role in developing a region that has always represented, especially with Rome, the fulcrum of evolution and progress from many points of view.

This ancient Italic population is dated between the 11th and 3rd centuries B.C. and is characterised by a flourishing culture and a high degree of civilisation. Skilled in engineering, hydraulics and architecture and skilled craftsmen, goldsmiths, etc., they had nothing to envy from the Ancient Romans. On the contrary! The revolutionary invention of the arch, to name but one, is attributed to them.

Etruria, a rather extensive territory in central Italy, included Northern Latium (Southern Etruria), the western portion of Umbria and a large part of Tuscany. The last kings of Rome (precisely the 5th and 7th in chronological order), Tarquinius Priscus and Tarquinius Superbus belonged to the Etruscan dynasty of the Tarquini, who created great public works, especially in the capital. In addition to Cerveteri (Rome) and Tarquinia (Viterbo), which we will see in detail shortly, the main Etruscan cities include Blera (Viterbo), Bolsena (Viterbo), Norchia (Viterbo), Tuscania (Viterbo) and Vulci (Viterbo).

The Necropolises: a faithful portrait of the Etruscan culture

A proud, refined and cultured people, the Etruscans left a remarkable heritage in Rome and Latium. They reached very high levels, not only in the arts but also in terms of social organisation. The cult of death led to the creation of real "cities of the dead". As a matter of fact, the term necropolis is composed of the Greek words nekrós "dead" and pólis "city" and indicates a group of tombs and burial grounds dating back to ancient times and, in general, to the pre-Christian era. Most of Latium's necropolises are located in the province of Viterbo and a small part in the province of Rome. Rather ancient and well-preserved, although not contiguous as they are about 50 km apart, they are considered a unicum and constitute the same archaeological site. Over time, following studies and excavations, a long and interesting series of objects and utensils have finally seen the light of day. These are mostly pottery, jewellery, little statues, ornamental masks, jewellery and much more. Many of the unique and precious objects recovered are kept in museums all over the world. The frescoes found, of remarkable workmanship and perfectly preserved, document the Etruscans' high cultural and artistic level. The two most significant necropolises of Latium Etruria, those of Cerveteri in the province of Rome and Tarquinia in the area of Viterbo, are exceptional examples of burial art, unique in the world, and UNESCO World Heritage Sites since 2004.

The Necropolis of Cerveteri or Banditaccia

Cerveteri, the ancient Caere, from the Etruscan Cisra, was the most important city in Etruria between the 7th and 4th centuries BC, and the most culturally open to the influences of Greek civilisation. Located a short distance from the sea, 45 km north of Rome and 50 km south of Tarquinia, it extends on a plateau (about 150 hectares) with steep tufa walls like the other Etruscan cities. The plateau lies between the Manganello and Mola ditches, which flow into each other to the south of the town. On a tuffaceous rise to the north of Cerveteri, beyond the two ditches, lies the monumental Banditaccia necropolis. The term "Banditaccia" originates from a real simple fact. Since the end of the 19th century, Cerveteri's landowners entrusted the area to the local population through a proclamation or ban (in Italian "bandita").

Commonly known as the Necropolis of Cerveteri, it is the largest cemetery in the Mediterranean basin. Covering about 400 hectares, we can visit only 10, it includes several thousand tombs dating from the 9th and 3rd centuries BC. These tombs follow a layout reminiscent of the urban structure of Etruscan cities, with streets and small squares, and represent a testimony and a valuable link with a civilisation that has now disappeared, incorporated and assimilated by Roman culture. They are a mirror on the life of the Etruscans, but above all on their architectural and urban evolution.

There are different types of tombs at the site, including rock-cut pits, tumuli, hut-shaped burials, or houses rich in decorative and structural elements. Many of the artefacts found at Banditaccia are housed in the National Etruscan Museum of Villa Giulia  in Rome and in the National Archaelogical Museum of Cerite in Cerveteri.

The Necropolis of Tarquinia or Monterozzi

About 50 km north of Cerveteri and 90 km from Rome, the Necropolis of Tarquinia develops on a plateau called Monterozzi because of the mounds in the form of piles of land (in the local dialect, "monterozzi"). Its tombs configure the largest complex known, with even 6000 graves carved into the rock. As many as 200 tombs are embellished thanks to the presence of spectacular pictorial decorations internally. Among these, the oldest tomb of all dates back to the seventh century BC.

The necropolis is the only and only evidence of classical painting of pre-Roman times throughout the Mediterranean. This archaeological area, now known for centuries, was visited by Michelangelo Buonarroti, one of the most authoritative characters. A memory remains at the Buonarroti archive in Florence, where the artist's drawing is kept.

Criteria for Inscription in the UNESCO World Heritage List

Among the motivations that contributed to the inscription of the Necropolises of Cerveteri and Tarquinia in the UNESCO Heritage Treasures, we mention:

Criterion (i): The necropolises of Tarquinia and Cerveteri are outstanding masterpieces of human ingenuity: the wall paintings of Tarquinia are exceptional both for their formal characteristics and for the message and meaning they represent. They tell and illustrate the Etruscan way of life, death cult and religion. In a context of a funerary nature, Cerveteri reveals the urban and architectural systems typical of an ancient city in a memorable way.

Criterion (iii): The two necropolises are unique and unrepeatable testimonies of ancient Etruscan civilisation. They are the only ones with this type of urban organisation in pre-Roman Italy. Moreover, the frescoes in the tombs depicting daily life are precious treasures that witness a vanished culture. These exceptional burials are, for the most part, authentic and faithful reproductions of Etruscan houses.

Criterion (iv): A large part of the tombs of Tarquinia and Cerveteri are examples of buildings and constructions that no longer exist and are not present in any other form. The necropolises, among the oldest in Latium, represent a precise portrait of typical Etruscan urban planning schemes.

The Necropolis of Banditaccia (Cerveteri) and the Necropolis of Monterozzi (Tarquinia) are exemplary archaeological sites not only for their antiquity and extraordinary extension. They are an accurate litmus test of Etruscan customs, urban planning, social organisation and culture. This aspect has a portentous aspect in that through "the city of the dead", one can learn fascinating pages of history that reveal the secrets of one of the greatest civilisations.

It was the Etruscans, long before Rome, at the time of the transition between prehistory and history, who built a high civilization in the heart of Italy, laying the foundations for the future birth of Europe. The Etruscans knew of the legacy of the ancient east, of its advanced civilization, transferred it to the soil of the European West.